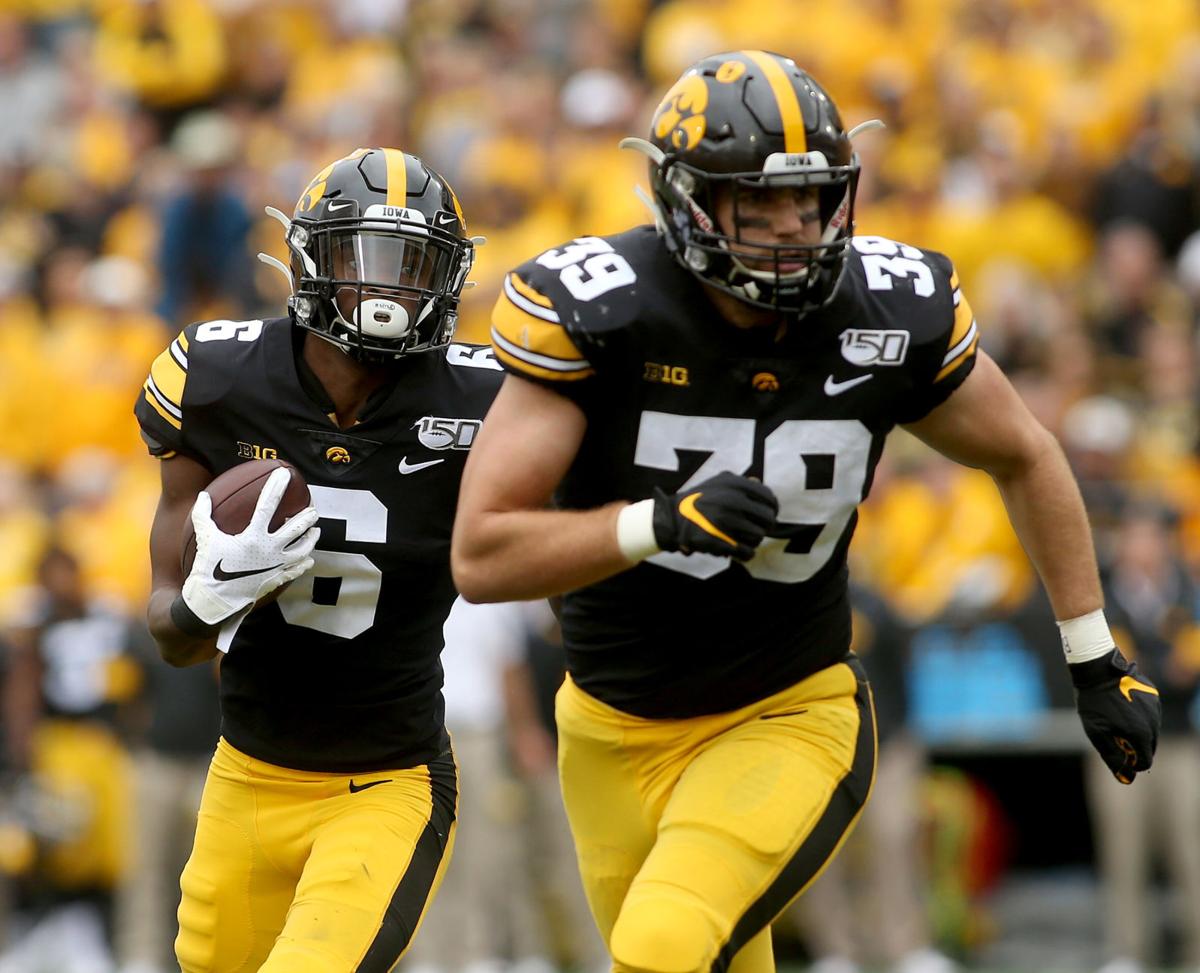 Iowa's Nate Wieting leads the way for Ihmir Smith-Marsette to gain yardage near the goal line during the second half of the Hawkeyes' win earlier this season over Middle Tennessee at Kinnick Stadium. 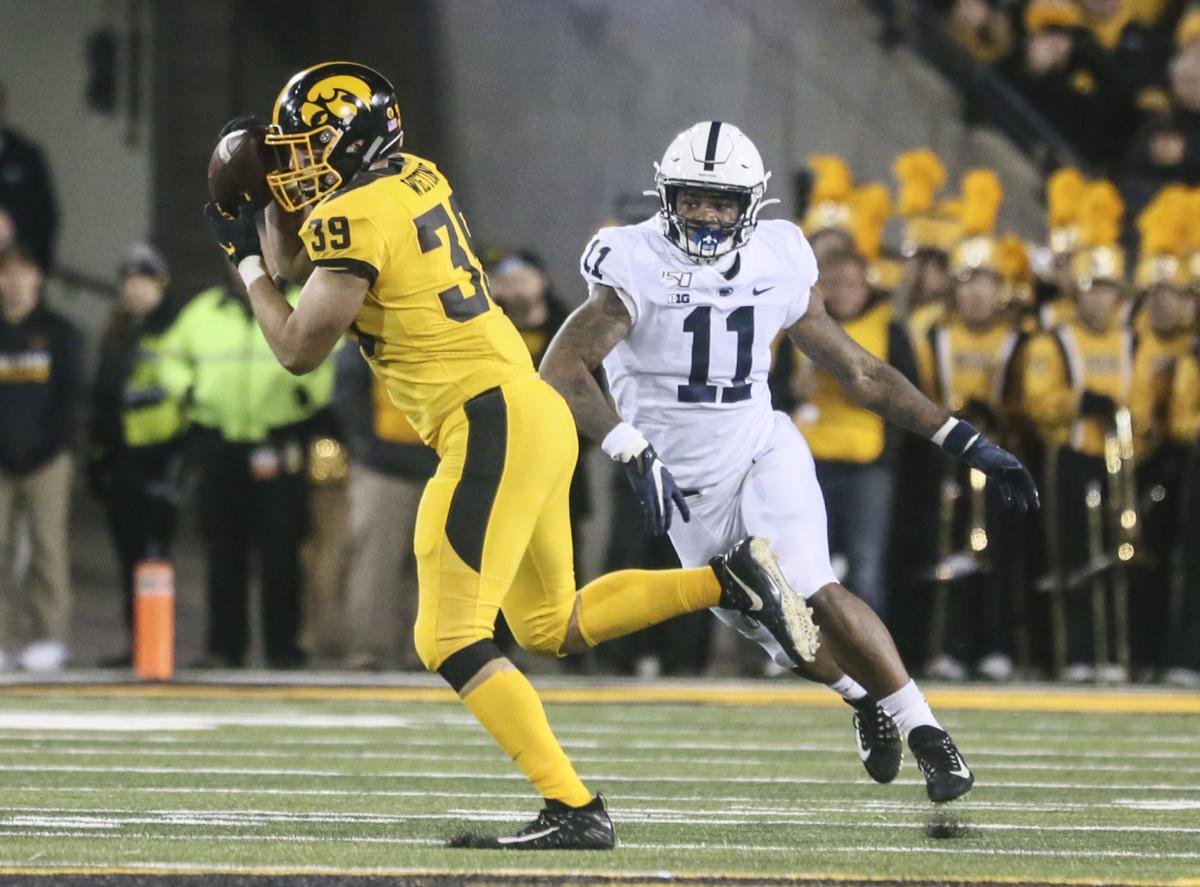 Iowa tight end Nate Wieting pulls in one of the four passes he caught in the Hawkeyes' loss to Penn State last weekend at Kinnick Stadium.

IOWA CITY — He may not have Noah Fant’s speed or the magnets T.J. Hockenson has for hands, but Nate Wieting is carving out his own niche for the Iowa football team.

Starting at a position where a pair of all-Americans lined up a year ago, the 6-foot-4, 250-pound senior has proven to be a capable receiver but has generally filled a more traditional tight end role during the first half of the Hawkeyes’ season.

"My job has been to do whatever I’ve been asked to do," Wieting said. "If that means blocking, I block. If that means catching a pass, I catch a pass. Whatever it takes."

That doesn’t change this week as Wieting works to help the Hawkeye offense get back on track in Saturday’s 11 a.m. game at Kinnick Stadium against Purdue.

After averaging 465 yards of offense and 33.5 points in its first four games, Iowa has averaged 308.5 yards and 7.5 points in consecutive losses the past two weeks to Michigan and Penn State.

The issues have been multiple — penalties, sacks, missed connections in the passing game and an inability to move the ball on the ground — and a solution must be collaborative, Wieting said.

"You have to give credit to the opponents, first. They made a lot of plays when it came down to it. They got after us, But, a lot of it falls on us as well," Wieting said.

"Communication to start off with, being detailed, being where we need to be when we need to be there, having awareness as to what could happen, what could go wrong, and then, going out and playing and executing at a high level. That’s all part of it."

That’s also all part of the solution.

"I think we’re really close at a lot of positions if we can hone in on those details," Wieting said.

That’s something Wieting can understand.

His role at tight end is largely the job of a multitasker in the Hawkeye offense.

His task includes working as a blocker to help create effective opportunities in the run and pass game.

It’s also his job to wrap his hands around a pass when needed, finding room to produce when the ball is thrown his way.

With Fant and Hockenson leading the way last season, tight ends accounted for 90 receptions in the Iowa passing game.

This season, Wieting and Shaun Beyer have combined for 10 catches during 23rd-ranked Iowa’s 4-2 start to the season.

That matches the receptions total of Purdue starting tight end Brycen Hopkins last Saturday when the senior, the son of former Moline and NFL offensive lineman Brad Hopkins, caught 10 passes for 140 yards to earn national tight end of the week honors for the second time this season.

Hopkins is finding room to roam down low as Boilermakers receivers are stretching the field vertically and stretching out opposing defenses.

That is part of what Iowa was able to accomplish to a more modest degree last week against Penn State. Wieting recorded a career high with four receptions and 54 receiving yards in the Hawkeyes’ 17-12 loss.

The Rockford, Illinois, native who arrived at Iowa a walk-on has averaged 10.7 yards per catch this season.

Quarterback Nate Stanley sees that as a byproduct of the work Wieting has put into his game.

"He has worked extremely hard to put himself in a position to be out there," Stanley said. "He’s been here a year longer than I have, but from the day I first stepped on campus, he’s always been willing to put in the extra work it takes."

That, Stanley said, has positioned Wieting to create the opportunity to move into the lineup this season after Fant and Hockenson took their games to the NFL.

"He has always wanted to hang around late and put in the time to keep working on his game," Stanley said. "He’s put himself in a position to be successful, and I have a lot of respect for that."

Wieting has learned from the skill that Fant and Hockenson brought to the position.

He particularly benefited from watching how Hockenson used his hands in the run game.

"T.J. always had his hands inside and when a defender tried to steer across your face, he taught me that if you can steer into that, you’ll keep the pressure on them and maintain the block a little longer, a little detail, but a big thing," Wieting said.

Those details are among the things Wieting talks about now as the Hawkeyes look to regain their offensive edge.

Purdue will challenge Iowa with a myriad of defensive looks, adding to the task the Hawkeyes face this week.

That puts a premium on preparation and patience.

"I think you have to have some patience as a player, knowing that not everything is going to be perfect," Wieting said. "Sometimes, you’re going to feel like you’re spinning your wheels, but that is the time when you really have to focus."

Iowa's Nate Wieting leads the way for Ihmir Smith-Marsette to gain yardage near the goal line during the second half of the Hawkeyes' win earlier this season over Middle Tennessee at Kinnick Stadium.

Iowa tight end Nate Wieting pulls in one of the four passes he caught in the Hawkeyes' loss to Penn State last weekend at Kinnick Stadium.