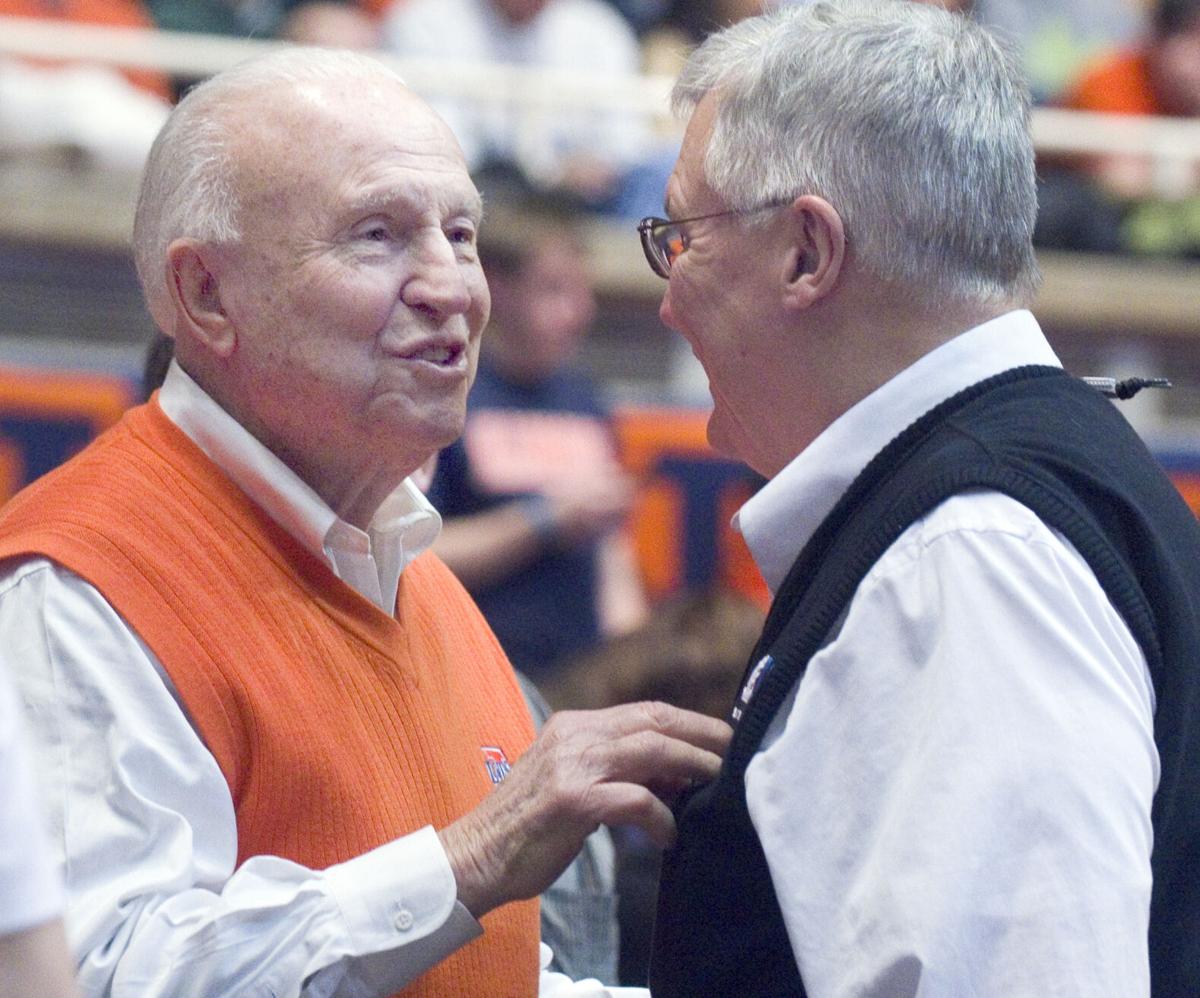 This past Saturday, the Illini family lost a great man.

Lou Henson and wife Mary were great for Champaign; it was the perfect place for them.

They always thought of others first in life and made time for everyone. Hence why the family kept his passing private due to the coronavirus pandemic, to try to avoid large gatherings for events such as funerals.

Those who knew Lou understood what kind of man he was.

During an era when foul language often went hand-in-hand with coaching, with Lou, what you saw is what you got, even behind closed doors.

Fans often forget that the coaches and players you see on TV are humans, and they have opinions and feelings just like the next person. Because of their status they have to keep some things that are best kept in-house to themselves.

Many years ago, my first encounter with Coach Henson had every adjective you could possibly imagine and then some.

I remember sitting outside in my truck just so I could hear his weekly call-in show. Technology then was not what it is today.

The weekly coaches show was on Mondays, and the coaches would take calls from listeners. Being extremely immature at the time, I called in one night to let Coach Henson have it. I could not understand why he could not get more out of former Illinois Mr. Basketball and prized recruit Jarrod Gee. It was frustrating to watch him play.

Back then when you called in, caller ID was not available, so you had to give your phone number, which I did.

The show went off at 8 that night, I walked back to my house at 8:03, and my wife said, "Kedric, some guy named Lou Henson is on the phone for you."

I said, “Please hang up the phone, not in the mood,” and she kindly did.

A few seconds later the phone rang again; I picked up the phone, yelling, “Stop calling my house,” but before I got to finish, I heard this quiet voice, "Kedric, this is Coach Henson. I want to talk to you about a few things. Do you have a second?"

In the four seconds it took him to say that, I became numb because it was his voice; I had hung up on him, thinking there is no way this man is calling me.

He asked if I had 15 minutes to chat with him; naturally I did.

Coach Henson agreed with everything I had to say; he shared that his staff felt Gee had so much more in the tank as well as a player but could not motivate him. So what does the coach say next?

"Now Kedric, you seem to know a little about basketball. Do you have any advice I can use to help this young man because we have tried everything?"

Coach Henson is asking me for advice; I literally broke out in a sweat and panicked, of course. Why? Because one of the best coaches of all time, a man I admired, who cared and was passionate about Illinois basketball, wanted to let me know we all mattered, and he would listen to me.

Fans who really did not know him only saw a man on the sidelines coaching, waving his arms up and down, but he never disrespected his players, parents, or colleagues.

Former Big Ten official Ed Hightower told me once, "It was hard sometimes to give Coach Henson a technical foul; the man didn't use foul language; he would walk away because he was a gentleman to us. We always listened to what he had to say because he never belittled us."

Several years ago, when I was walking to my seat in the press box area of Memorial Stadium, Coach Henson was there with longtime assistant coach Mark Coomes, and I thought why not. I introduced myself, brought up the Gee phone call and our conversation.

Coach Henson said, "Oh yeah, I remember you, thank you for the phone call."

I thought no way he remembers me that being so long ago. When I started to walk away Coach said, "Now, I want you to know, I had a conversation with Jarrod, I told him all the things you and I talked about; I think it made a difference (smiling)."

Lou showed me that he was not all talk, he was truly a genuine man with values.

College basketball lost a good man at the age of 88, who was laid to rest on Wednesday morning right next to his son Lou Jr. in Champaign, Ill., at Roselawn Cemetery.

After whirlwind of activity, Big Ten looks tougher than ever

The turnover in personnel in college basketball programs these days can be mind-boggling at times.

Joel Novak was one of those pass-first point guards who never scored very many points himself.

Big Ten Conference football and basketball players as well as participants in nine other high-contact sports will be tested at least twice weekly under the conference-wide COVID-19 protocols announced Wednesday.

Davenport high school basketball player Emarion Ellis brought an abrupt end to his recruiting process Tuesday by making a verbal commitment to the University of Texas.

Garza says he won't regret decision to stay at Iowa

Luka Garza pretty much knew this was what he was going to do all along.