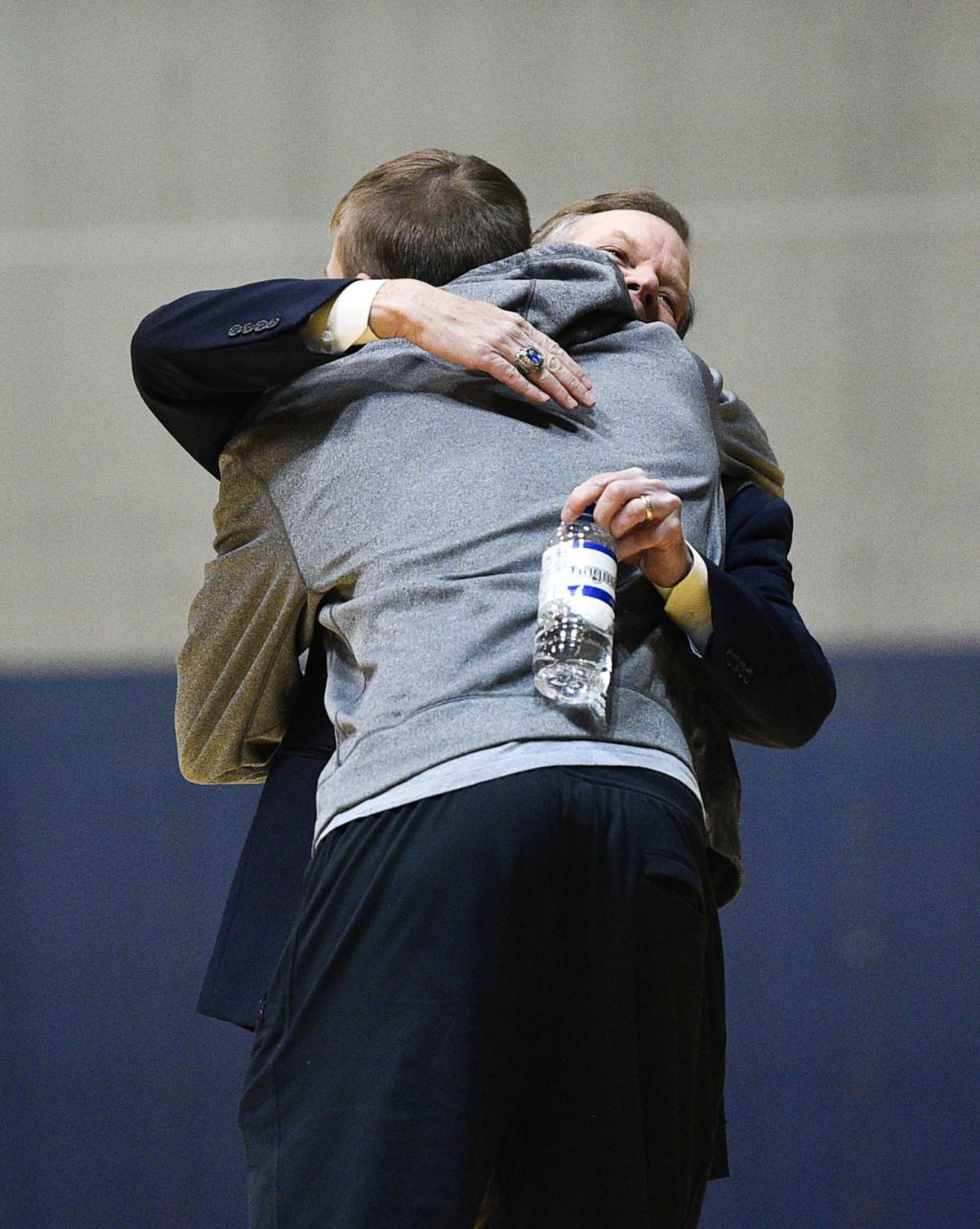 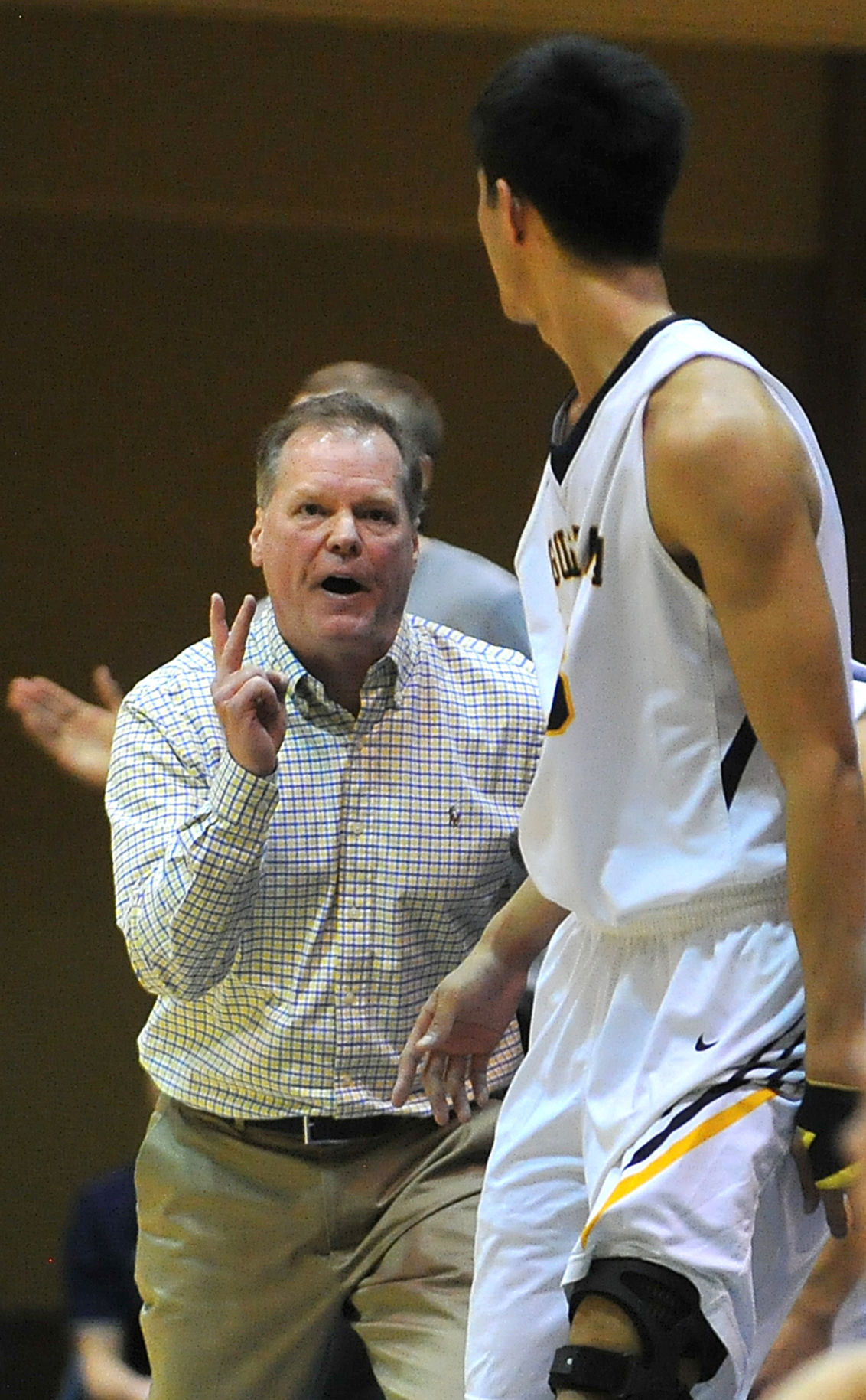 Former Augustana head men's basketball coach Grey Giovanine emphatically gives directions to Lucas Simon before sending the senior back out on the floor during a game at the Carver Center this past season.

It was a place he had occupied thousands of times. Many of those moments were spent addressing his Augustana College men's basketball teams before, during and after workouts. Still other times his spot on or near the big “A” in the middle of the court were to enjoy celebrations of titles won or other significant accomplishments.

It was where he was honored for 500 career coaching victories.

The backdrop was different on Tuesday.

Sure, his wife, Kelly, had picked out a sharp ensemble that included a dark blue sport coat and fancy pocket square for the tip-off of an event that was appropriately set for 7 p.m. — the same time as Augie home games.

As he was for so many other moments in that gym, Gioavnine was in control and comfortable being the center of attention.

However, instead of a basketball game going on around him, this game was all his. Surrounded by seven members of the local media and five Augustana administrators/staff, Giovanine's message was simple and direct.

After 21 years as coach of the Augustana men's basketball team, he was stepping away from the game he grew up with and loves.

He admitted there was no one event that changed the course of his future.

“At the end of all 27 seasons I've been a head coach, I've been ready to retire at the end of every season — you're so exhausted and spent,” joked Giovanine, who amassed a 433-150 overall record at Augie, including a 214-88 CCIW mark. “I really felt this year I didn't want to make any decision until at least May 1st because you tend to bounce back and get re-energized.

“The last couple of months I've just pulled to this direction more and more.”

There had been no slowing down the feisty 60-year-old — even in early 2019 as he battled prostate cancer through the final few months of the 2018-19 season ahead of surgery in March of that year.

He would leave games dripping as much sweat as his players. He constantly gave it his all on the bench.

Of late, though, there was less of his all to give.

“I did find this year, it was more challenging for me to coach following last year's surgery,” he admitted, adding he is healthy. “All of us, over the last couple of months, you have so much time to reflect and consider priorities and so on. It's been a gradual process. You can't coach forever. ...”

Even if you seemingly can hang with the Energizer Bunny.

“Grey's accomplishments at Augustana have been remarkable — the list of team achievements is impressive, especially when you consider the level of parity that exists today in small-college sports,” Augustana athletic director Mike Zapolski said. “Grey's drive, enthusiasm and passion were ever-present, whether it was during a game, practice or the recruiting process.

"In the final analysis, Grey's biggest impact on the program was the number of people that he impacted and how he effectively used the platform of basketball to teach critically important life lessons.”

Former players chimed in on social media with well-wishes, praise for a job well done, and stories. Many thanked him for his guidance and sharing his knowledge as much as those who lamented his dread timed 2-mile run at the start of each season.

“A man with unparalleled energy, contagious excitement and a special charisma,” wrote senior Austin Elledge of Giovanine. “THE BEST coach in the country. Wouldn't have wanted to play for anyone else. Thanks Coach.”

The coach admitted that “what I valued most in this whole business were the relationships, particularly those with the players.”

“I'm a better dad, and coach to kids, because of your teaching, and how you led as a friend, coach and dad,” former player Zac Larson said.

And that's as much the legacy Giovanine will leave behind as he becomes a cheerleader from afar for the Viking family he once proudly led to 10 CCIW titles, 16 NCAA Division III Tournament appearances and two Final Four trips that culminated in national title game appearances.

The competitor within marveled at the accomplishments of the last 21 seasons and even put in perspective the two national title-game setbacks that kept him from a coveted national title.

“Yeah, I wish the ball had bounced a different way a couple of times; it sure would have been fun to hang a couple of national championship banners,” he said. “But I know as a coach that is not the most difficult thing to do — you can get hot for those two weeks.

“Winning those regular-season championships is the most difficult thing in coaching because you play that double-round robin over two months. I take great, great, satisfaction of what our teams were able to do. …

“It doesn't leave any hole in my resume or that stuff. I read Dave's (sports information director Dave Wrath's) release today and marveled, quite honestly. Wow. It was pretty special.”

He revived a storied program and brought basketball back to the forefront at Carver Center and on the national Division III landscape.

But like all of us are realizing amid the COVID-19 pandemic, things aren't what they used to be.

But not until Giovanine commanded an audience at center court one final time.

However, a number of things were different this time.

The dark blue sport coach with the fancy pocket square Kelly had picked out for him stayed on all night. There were no officials in striped shirts to have friendly conversations with. There was no adulation from the crowd and Carver Crazies he richly deserved on his sendoff.

But like so many other nights in that storied 21-year career, Giovanine left the Carver Center court a winner.

Sun will give way to clouds, overnight rain, then areas of frost Friday night and early Saturday. Here are the weather details from the Nation…

Former Augustana head men's basketball coach Grey Giovanine emphatically gives directions to Lucas Simon before sending the senior back out on the floor during a game at the Carver Center this past season.