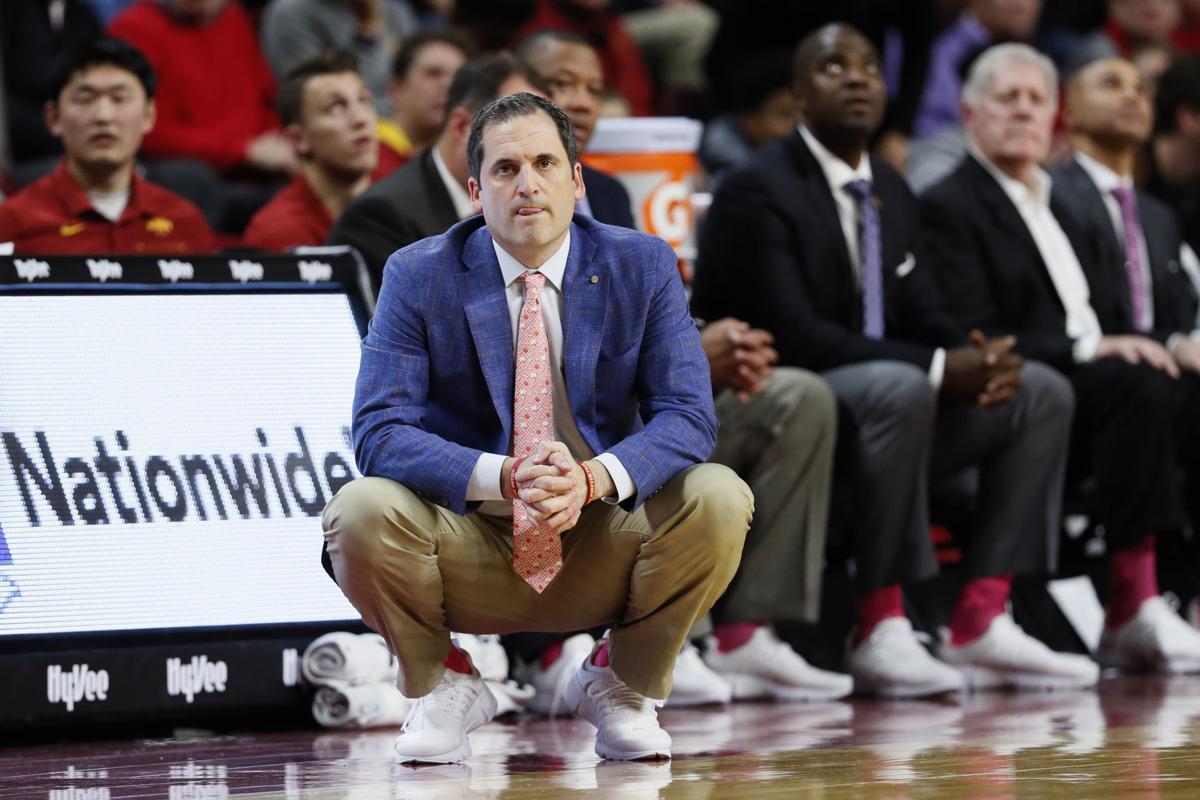 Iowa State head coach Steve Prohm watches from the bench during the second half of a Jan. 21 game against Oklahoma State. The Cyclones won the game 89-82 to even their record at 9-9, but lost 11 of their 14 remaining games. 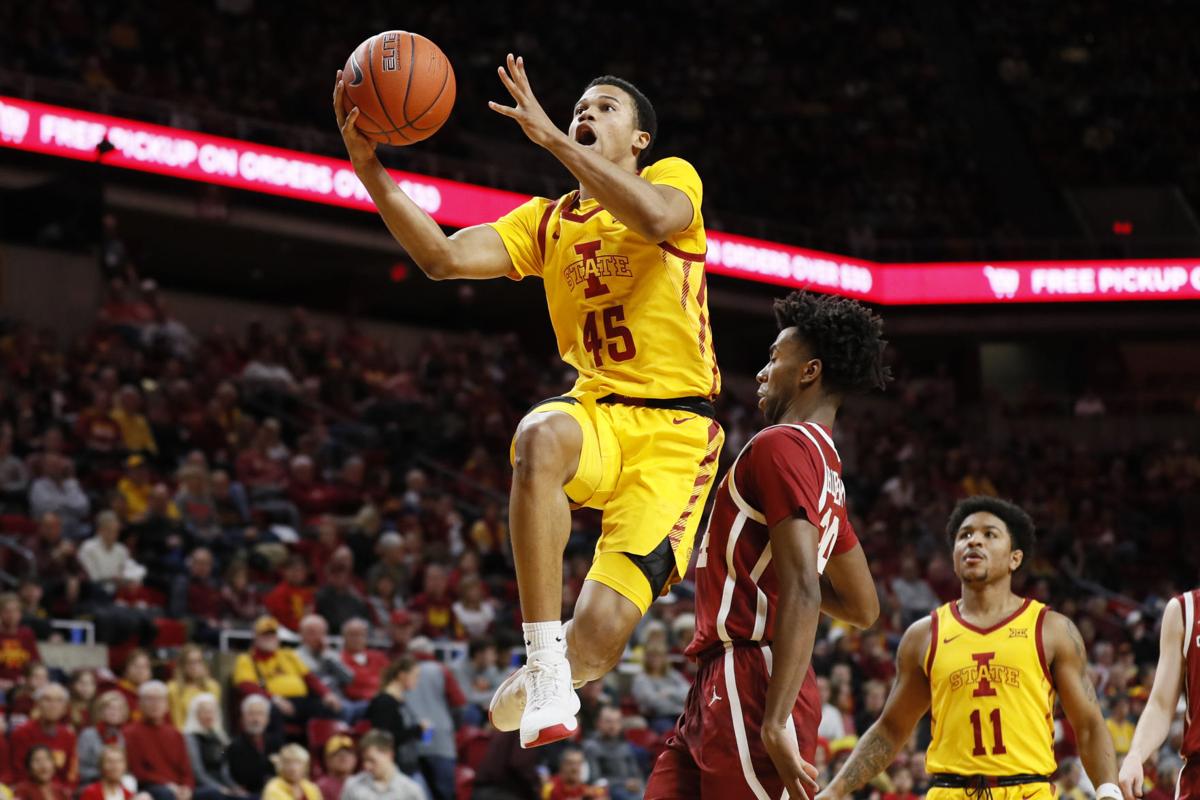 Iowa State guard Rasir Bolton (45) drives to the basket past Oklahoma guard Jamal Bieniemy during a game in Ames last season. Bolton's development is one of the keys for the Cyclones heading into the 2020-21 season.

Forgive Steve Prohm if he isn’t very interested in talking about what happened last winter. It’s history. Time to move on.

His Iowa State basketball team went 12-20 — the Cyclones’ worst record in 18 years — and failed to win a single road game.

ISU’s best player — by far, it wasn’t even close — missed eight games with an injury and is leaving for the NBA. Tyrese Haliburton figures to be the program’s highest draft pick since Marcus Fizer went fourth overall in 2000.

Two other starters used up their eligibility. Three reserves who played in nearly every game transferred.

And still, Prohm seemed to brim with optimism for the future as he spoke on the Cyclones’ virtual tour last week.

And hey, why not? There still are a few good returning players plus a good recruiting class and a couple more transfers.

But it seems as though the Cyclones are going to go into next season hoping for success rather than expecting it, as they normally have over the past decade or so.

Prohm hopes guard Rasir Bolton can take another step in his development going into his junior season. He hopes senior center Solomon Young can take on a more prominent leadership role. He hopes junior big man George Conditt will respond to a new strength coach.

He hopes Javan Johnson, a transfer who sat out last season, can be a playmaking point forward. He hopes four incoming freshmen will have an immediate impact. He hopes Memphis transfer Tyler Harris will be granted immediate eligibility, as Bolton was last season.

Let's face it, that’s a lot of hoping.

There seems little question that Bolton, who transferred in from Penn State, needs to step up to become the next star player in the program.

"I thought he made great strides …," Prohm said. "I thought he played really well, averaged right around 14-15 points, and I think if you looked at his Penn State numbers (compared) to his numbers as a sophomore, he really improved a lot in the efficiency areas that he needed to, especially as a guard or lead guard in our system."

Prohm said Bolton’s assist-to-turnover ratio was much better and the 6-foot-3 guard has been watching lots of video in the off-season in an effort to become even better.

Prohm also has very high hopes for Johnson, a 6-6 junior who sat out last season after transferring from Troy. Johnson only averaged 8.0 points per game in two seasons at Troy, and players transferring from mid-major programs to power-5 schools often see their statistical production get cut in half.

But he feels Johnson fits perfectly into his system because of his length and versatility.

"When we play four guards, he can really play the 1, 2, 3 or 4 for us," Prohm said. "He’s a guy that when it’s late shot clock, he can go make a basket, he can make a play. He’s got great instincts offensively. He’s what I call a late passer. He can get up in the air and hang and wait and then make that pass at the last second, similar to a guy like Tyrese has done in the past."

Prohm also loves the playmaking ability of Harris, a 5-9, 150-pound dynamo who was a 4-star recruit coming out of high school. Harris averaged 9.8 points a game in two years at Memphis, although his production dropped off noticeably as a sophomore last season.

There is no guarantee Harris will be allowed to play right away. Getting immediate eligibility for transfers is an iffy thing these days.

"He would be a huge added bonus because I think he’s a legit double figure threat for us," Prohm said. "I think the fans would love his spirit and love his personality and his ability to make plays."

In the past week, the Cyclones added another transfer guard in Jalen Coleman-Lands, who has spent the past five years at Illinois and DePaul, and will get a rare sixth year because he missed most of the 2018-19 season with a hand injury.

Coleman-Lands is a streak shooter who already has made 235 3-point field goals in his career, 20 of them in five games against arch-rival Iowa.

Harris sank 138 3s in two years at Memphis, Bolton has 97 the past two seasons and Johnson shot 43.8% from behind the arc as a freshman at Troy. It’s possible this could be one of the Cyclones’ best 3-point shooting teams in some time.

They also have added a great deal of length on the perimeter in three freshmen who all are 6-5 or 6-6.

One area where they definitely should be better is the center position.

The 6-8, 242-pound Young always has provided a physical presence around the basket, but he emerged as more of an offensive force last season, especially after Haliburton was sidelined. He underwent arthroscopic surgery on his knee this spring but will be ready long before practice begins.

"I feel really good about our 5 spot going into the new year with Solomon as well as George Conditt and then our young guy, Xavier Foster, coming in to play," Prohm said.

There really does appear to be a lot of talent there. But someone — most likely Bolton — needs to become the sort of alpha that Haliburton, Monte Morris and Georges Niang have given the Cyclones in the past.

And with so many new guys playing prominent roles, it’s imperative that they get a chance to work together at least a little bit this summer.

But hey, at least there’s hope.

Schafer plans to build Augie's future off its past

For awhile this spring, Iowa guard Joe Toussaint was playing a lot of basketball outdoors.

Cyclones get transfer from Ole Miss

Former University of Mississippi forward Blake Hinson has announced plans to transfer to Iowa State, citing Mississippi’s acknowledgement of the Confederate flag as part of the reason for his departure.

The University of Illinois basketball program picked up one more player in its 2020 recruiting class Thursday when Chicago area 7-footer Brandon Lieb made a verbal commitment to play for the Illini.

It sounds as though the suspense for Iowa basketball fans may soon be over.

Schafer excited to be back home with Augie job

New Augustana men's basketball coach Steve Schafer admitted he never envisioned being in the coaching profession when he was growing up.

Iowa State head coach Steve Prohm watches from the bench during the second half of a Jan. 21 game against Oklahoma State. The Cyclones won the game 89-82 to even their record at 9-9, but lost 11 of their 14 remaining games.

Iowa State guard Rasir Bolton (45) drives to the basket past Oklahoma guard Jamal Bieniemy during a game in Ames last season. Bolton's development is one of the keys for the Cyclones heading into the 2020-21 season.