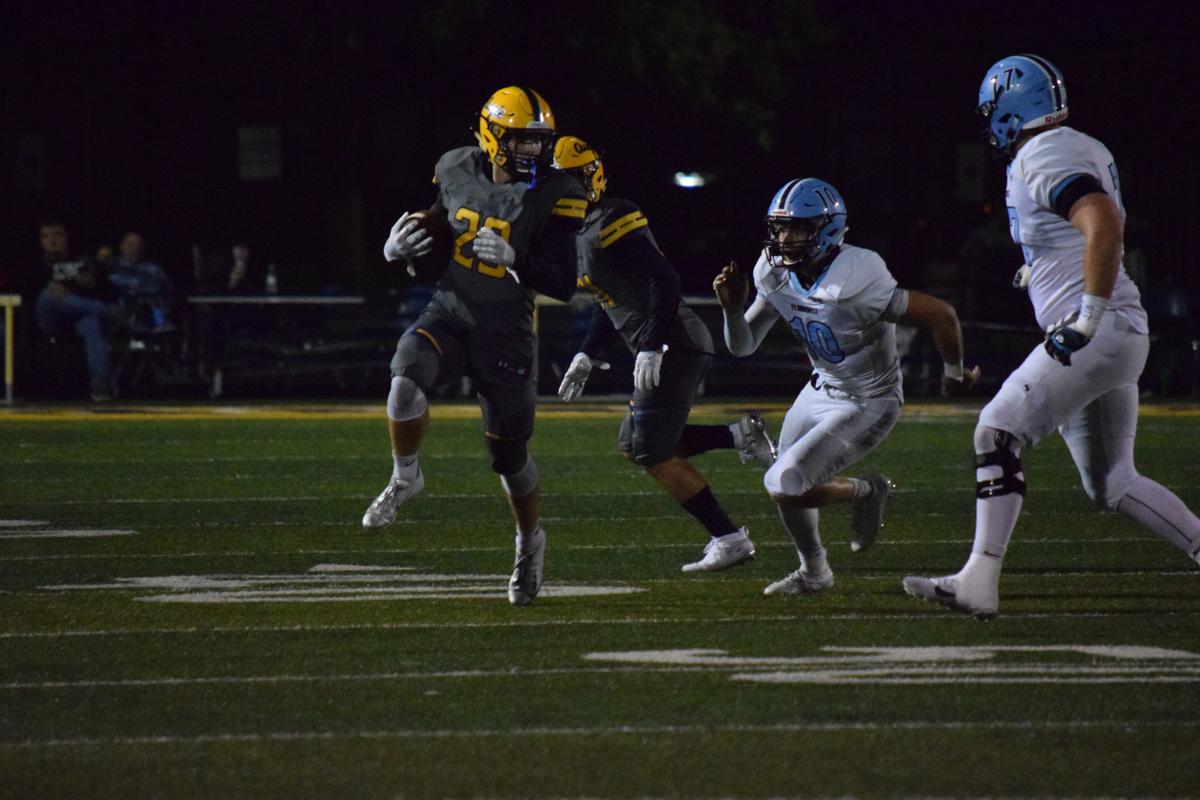 Augustana junior defensive back John Kappel (29) returns an interception against Elmhurst earlier this season at Lindberg Stadium. The Vikings lead the CCIW with 11 interceptions and a league-leading five of those belong to Kappel. 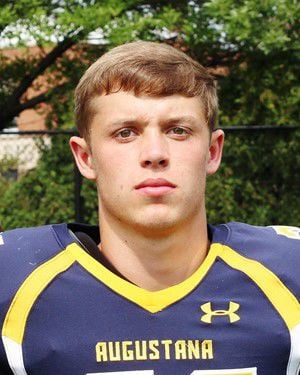 ROCK ISLAND — If the opportunity arose, John Kappel could fit right in with the receivers on the Augustana football team in a conversation about applying their trade.

Which is saying quite a bit for the Vikings' starting boundary safety.

You see, Kappel leads the CCIW in interceptions this season and his five “catches” would place him sixth among Augie receivers this season.

“I'm not really about that," Kappel joked about any trash talking with the receivers. “When I get an interception, sometimes the receivers will come up and say 'good job.'”

Catching the ball, though, comes naturally for Kappel. While starring at Wheeling High School in the Chicago suburbs, he was both a starting wideout and defensive back (both cornerback and safety) for much of his career until moving to linebacker as a senior.

The Augie coaching staff seemed split on where Kappel would be better for the Vikings, who also lead the conference in picks this season with 11.

“I loved receiver; the hardest thing was coming in and thinking I was going to be a receiver,” admitted Kappel. “When I talked to (head coach Steve) Bell, I was coming in as a receiver. Our old defensive coordinator was the one who came to our high school and recruited me and he always hinted he wanted me to play defense, but I hinted I wanted to play offense.”

Kappel said by the time he finally got to campus, he had been penciled in on the defensive side of the ball.

And it took no time at all for the now 6-foot, 190-pound junior to work his way onto the field. He saw action in all 10 games as a freshman and by the fourth game, had been inserted into the starting lineup at safety.

It proved to be an odd situation as Kappel took the spot previously held by John Asquini.

“I knew (Asquini); he played in our high school conference,” said Kappel, who is also second on the team with 35 tackles, trailing only All-CCIW linebacker Luke Sawicki's team-leading 43. “He was two years older than me and I didn't think I would start over him at first. I kept putting in the work and it ended up working out.”

Kappel, who downplays individual accomplishments and focuses on team results, also was quick to point out that his success was the result of Asquini being such a great teammate.

“Going into that week against Carroll when our old defensive coordinator told us both that I was going to start that game, he was honestly the reason I was successful that game and from there on out,” said a grateful Kappel of Asquini, who ended up moving to an outside linebacker spot. “He helped me go over all the defensive calls and defensive checks. He was a big reason I was playing well. He helped me out learning all this stuff.”

Combining Asquini's assistance with plenty of natural talent has made Kappel a big part of the Viking defense. So has the work Kappel has put in. He admitted this past summer was his biggest off-season of work back home with classmate Stu Isteefanos and hopes to increase that by staying in the Quad-Cities this summer and get pushed by more teammates.

That should continue a steep progression in skills to go with his natural athletic ability he displayed in high school when he also played basketball.

“His progression from his first snap as a freshman starting to today has been an unbelievable jump in terms of intelligence demonstrated on the field,” said Bell.

The coach admits that both the physical and mental games have made Kappel a key cog in a stout defense.

“With great technique he is putting himself in position to make those plays,” Bell said of Kappel's penchant for picks. “Of course, he has to make the plays, but he is in the right position. His football intelligence has increased as he's gotten older and more experienced. He is also an extremely, extremely hard working kid.”

Being in a position on the field that he loves playing has also helped bring out the best in the former wideout. So did being a receiver for much of his career.

“Being a receiver also, you see how both sides of the ball works,” said Kappel. “It also helps your ball skills because all you do is catch balls in practice. It's different coming up for balls instead of having balls thrown to you, but having the overall ball skills from the offensive side definitely helps.”

So does his perspective.

“I love defense,” said Kappel. “I love where I'm at now. … I'm definitely a defensive back at heart.”

One who has shown he still has very good ball-catching skills.

Augustana junior defensive back John Kappel (29) returns an interception against Elmhurst earlier this season at Lindberg Stadium. The Vikings lead the CCIW with 11 interceptions and a league-leading five of those belong to Kappel.