The opening weeks of the NBA season are always filled with the same words of caution: It’s too early to tell.

But with a quarter of the season having already flown by, the Chicago Bulls have played enough to fill out a clearer picture of their style and substance.

Although the team’s eight losses highlighted plenty of areas for improvement, standout performances from the star players and defensive consistency have quickly ballooned fan expectations from cautious optimism to outright excitement as the Bulls (14-8) contend for a top spot in the Eastern Conference.

The acquisition of DeRozan was met with questions — and some outright disbelief — about how the high-scoring forward would fit into the Bulls lineup alongside Zach LaVine. Now it’s hard to picture how this lineup would work without the pair.

DeRozan teased doubters after the Bulls beat the Denver Nuggets last month, posting a photo on Instagram of him and LaVine with the caption, “Guess it ain’t working. Ha!”

LaVine and DeRozan provide needed balance to the Bulls offense. DeRozan’s midrange effectiveness allows LaVine to loosen up from playing hero every game, while LaVine’s ability to both drive to the rim and shoot from long range opens the gut of the half-court for DeRozan to work in.

The duo rarely has an off night at the same time, and they’re averaging a combined 51.2 points per game to make the Bulls a consistently competitive team.

The Bulls are asking Vučević to be a different player to fit into their system. The team’s small-ball offensive style emphasizes ball distribution more and posting up less, a marked break from the center’s expectations in Orlando.

After a 30-point performance against the Charlotte Hornets on Monday, Vučević noted this can make it harder for him to shake out of a shooting rut.

“I was the main guy in Orlando for years and the ball was always with me,” Vučević said. “I knew I was going to get my shots regardless of how the game’s going. Even if I don’t get one, two, three shots in the first quarter, eventually the ball would find me in the end.

“Now it’s different. We have more talent and more guys on the ball, and so I just had to figure out my ways a little bit. ... It’s just a little bit of a work in progress.”

Vučević felt he nearly had found equilibrium with LaVine and DeRozan before missing 11 days with COVID-19. Monday night showed that when all three stars are firing, the result can be deadly.

3. The half-court offense leaves the largest room for improvement.

Alex Caruso was blunt after the Bulls lost to the Miami Heat on Saturday: The Bulls might be one of the top transition teams in the league, but their half-court offense isn’t elite yet. They are particularly challenged by zone defenses, which have stalled the team into stagnation early in the season.

The Bulls are an aggressive, athletic team with accurate shooters who can finish creatively around the rim, which is why they’re so confident in transition.

The team’s ball movement typically comes from passing rather than elite dribblers, and teams have begun to pressure LaVine and DeRozan early and often to cut off their ability to spark plays with entry passes. Vučević also falls into underutilized ruts in the half-court offense, struggling to find the right balance of posting up and operating in pick-and-pop situations.

As opponents gain more film on the Bulls, they’ll need to expect these weaknesses to be exploited more heavily.

4. Small ball brings challenges on both ends of the court.

The Bulls boosted their confidence playing small during the two-week stretch without Vučević. The tactic plays directly into many of the team’s strengths — fueling the offense through turnovers, stretching the court, playing at a high pace downhill.

But playing small also can wear on a team. Coach Billy Donovan noted the team’s lack of size can cause unnecessary fouls, particularly late in games when undersized players begin hacking at big men in the paint in an attempt to dispossess them.

The Bulls play a fairly clean defensive game, sitting dead middle of the NBA at 15th in team fouls, but they can get frustrated when they’re forced to grind out half-court possessions against bigger opponents.

On the other side, the Bulls play best in a slash-first, shoot-second rhythm that forces defenses to collapse before spreading the ball. But when larger teams cut off the paint, the Bulls can revert to taking a high volume of lower-percentage jump shots, which can lead to results like the disastrous 109-77 loss to the Indiana Pacers.

Although the Bulls rely heavily on their seasoned core of stars, the progress of third-year guard Coby White and rookie Ayo Dosunmu will be a key to their depth down the stretch.

White was shaky in his first two games after offseason surgery to repair a torn labrum in his left shoulder, but he exploded in confidence the last two weeks. His 6.1 points per game might not jump off the page, but White has become a reliable rotational piece who can shoot from 3-point range and maintain defensive energy.

Dosunmu has brought the steady spark the Bulls needed him to provide — 5.8 points per game on 47.1% field-goal shooting with a dash of fearlessness to attempt to hammer dunks when given enough space around the rim. His growth has been visible from game to game, particularly after the West Coast trip.

Dosunmu will need to step up even more while White is sidelined with COVID-19, providing the young guard a bigger chunk of minutes.

Innovative insulation unveiled for Team USA ahead of Winter Olympics

Brawl breaks out between Cowboys, 49ers fans outside AT&T Stadium

Brawl breaks out between Cowboys, 49ers fans outside AT&T Stadium

Bulls guard Alex Caruso eager to get back on the court

"I’m just itching to get back and win," Alex Caruso said ahead of Wednesday night's game.

ORLANDO, Fla. — Asked about Ben Simmons’ situation, Michele Roberts didn’t hold back in voicing her displeasure with the 76ers’ front office. Speaking on SiriusXM NBA Radio on Wednesday, the soon-to-retire National Basketball Players Association executive director took the Sixers front office to task. “Candidly, I think a lot of this stuff could be resolved if everyone behaved like a ...

DALLAS (AP) — Kristaps Porzingis got the call on the first play of his first game in two weeks for the Dallas Mavericks.

CHICAGO — The "MVP! MVP!" chants are ringing out in Chicago once again, this time for Bulls star DeMar DeRozan as fans have something to cheer about in the Windy City.

SACRAMENTO, Calif. (AP) — Christian Wood had 23 points and 14 rebounds, Eric Gordon made a clutch bucket with 12.5 seconds remaining and the Houston Rockets held off the Sacramento Kings 118-112 on Sunday night.

SAN FRANCISCO (AP) — Stephen Curry hit a game-winning 20-foot jumper from the top of the key to beat the final buzzer, scoring 22 points and sending the Golden State Warriors past the Houston Rockets 105-103 on Friday night. 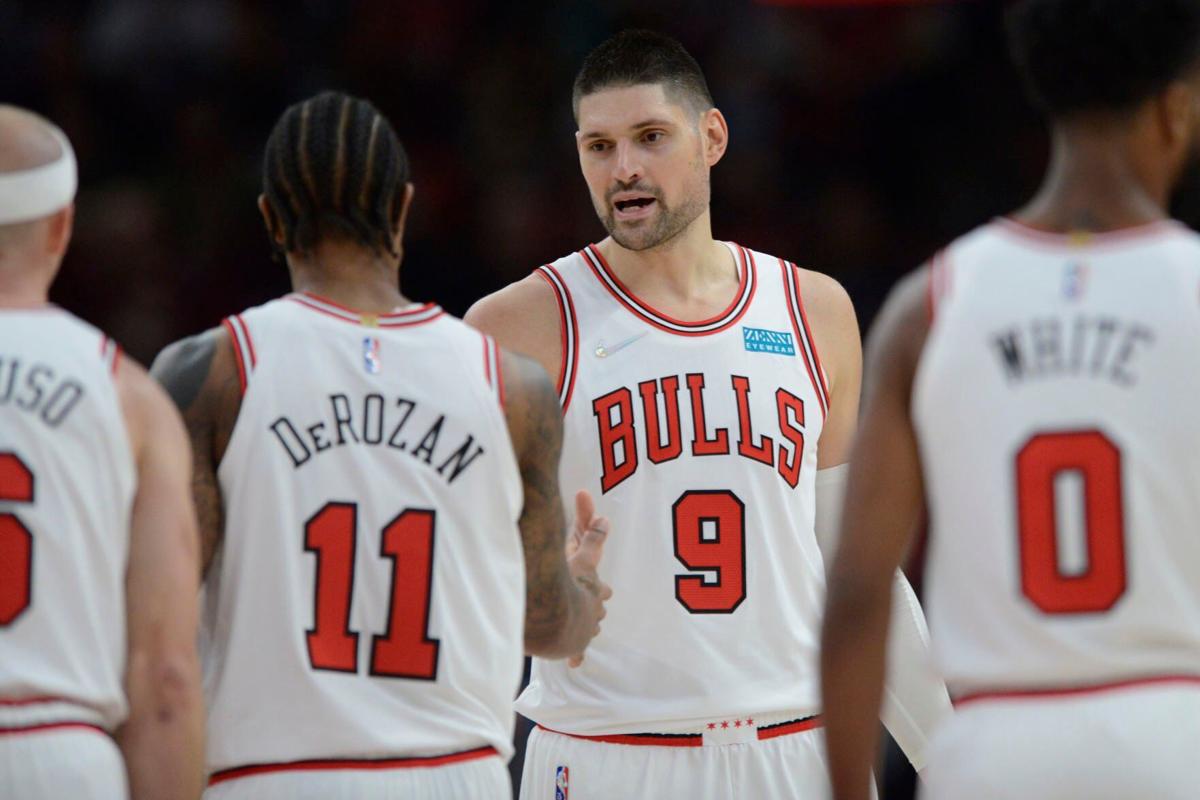 Chicago Bulls' Nikola Vucevic (9) and DeMar DeRozan (11) celebrate during the second half of a NBA basketball game against the Charlotte Hornets Monday, Nov. 29, 2021 in Chicago. Chicago won 133-119. 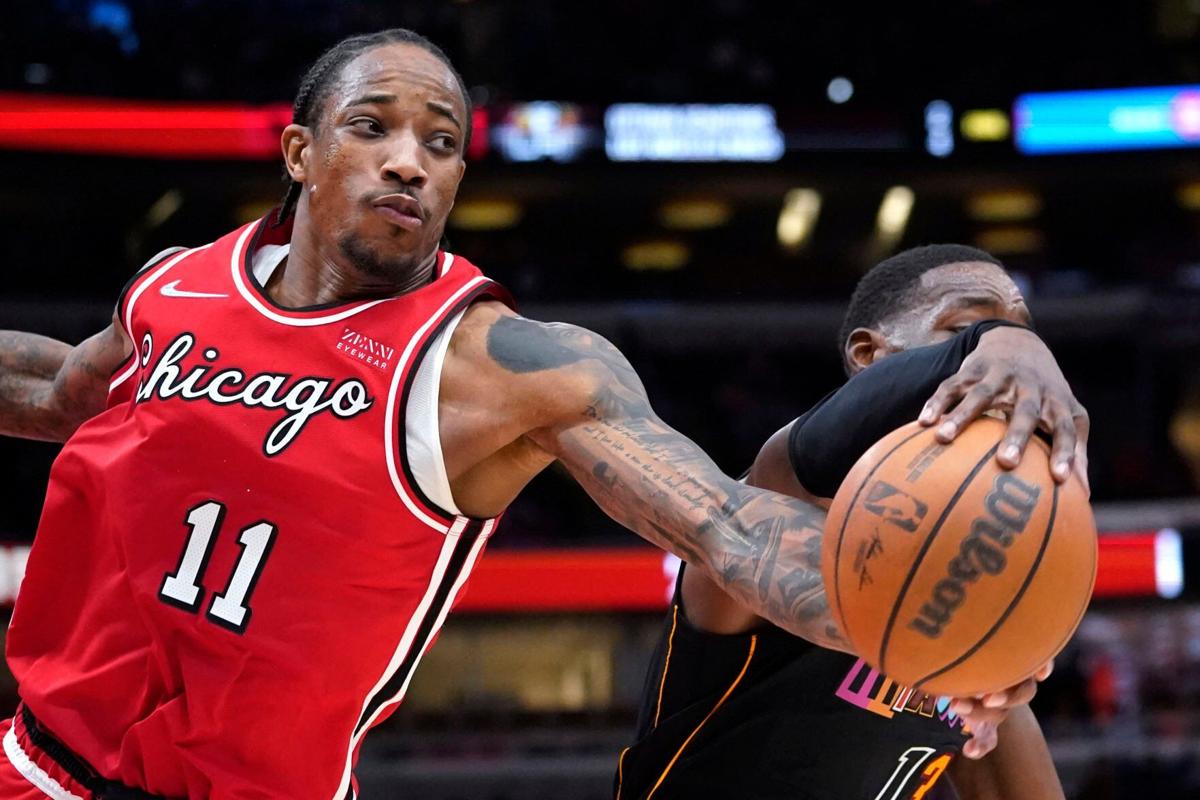 Chicago Bulls forward DeMar DeRozan, left, and Miami Heat center Bam Adebayo reach for a rebound during the second half of an NBA basketball game in Chicago, Saturday, Nov. 27, 2021. The Heat won 107-104. 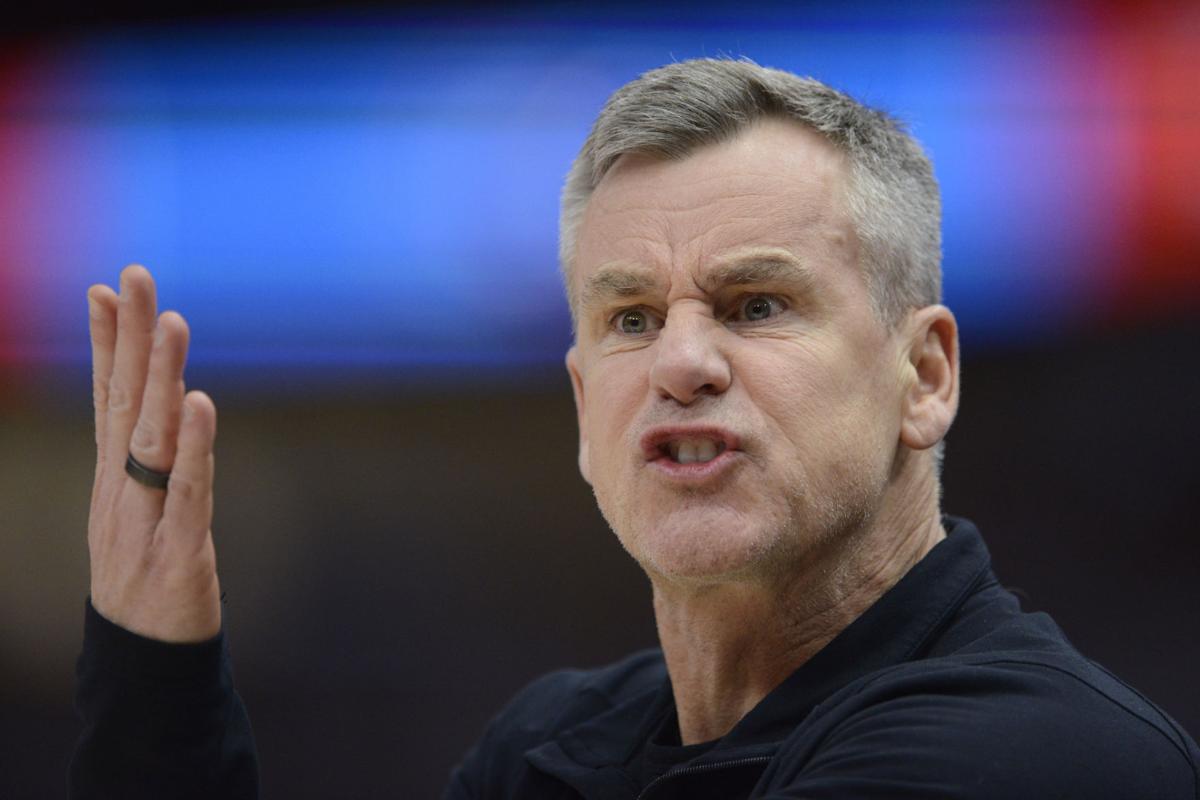 Chicago Bulls head coach Billy Donovan yells to the referees during the second half of a NBA basketball game against the Charlotte Hornets, Monday, Nov. 29, 2021 in Chicago. 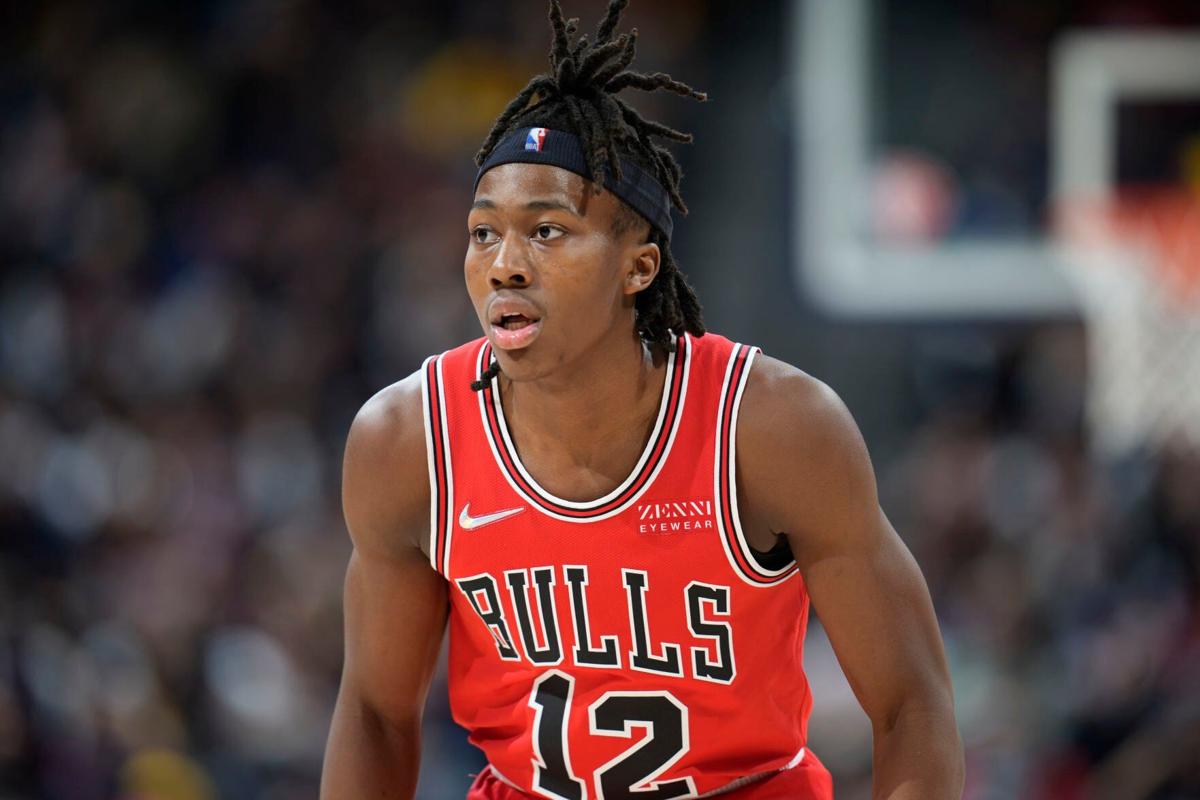