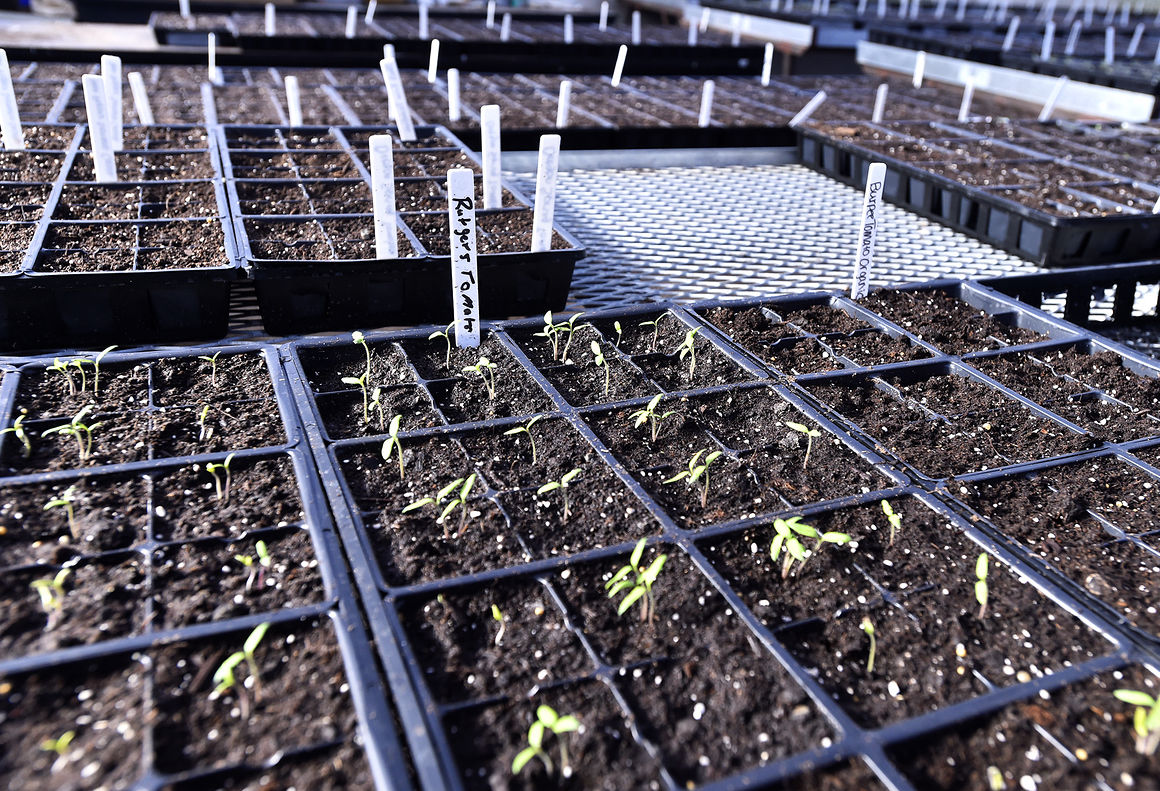 Dozens of different kinds of plants have begun to sprout at the Rockridge High School greenhouse Thursday, April 6, 2017, in Taylor Ridge. 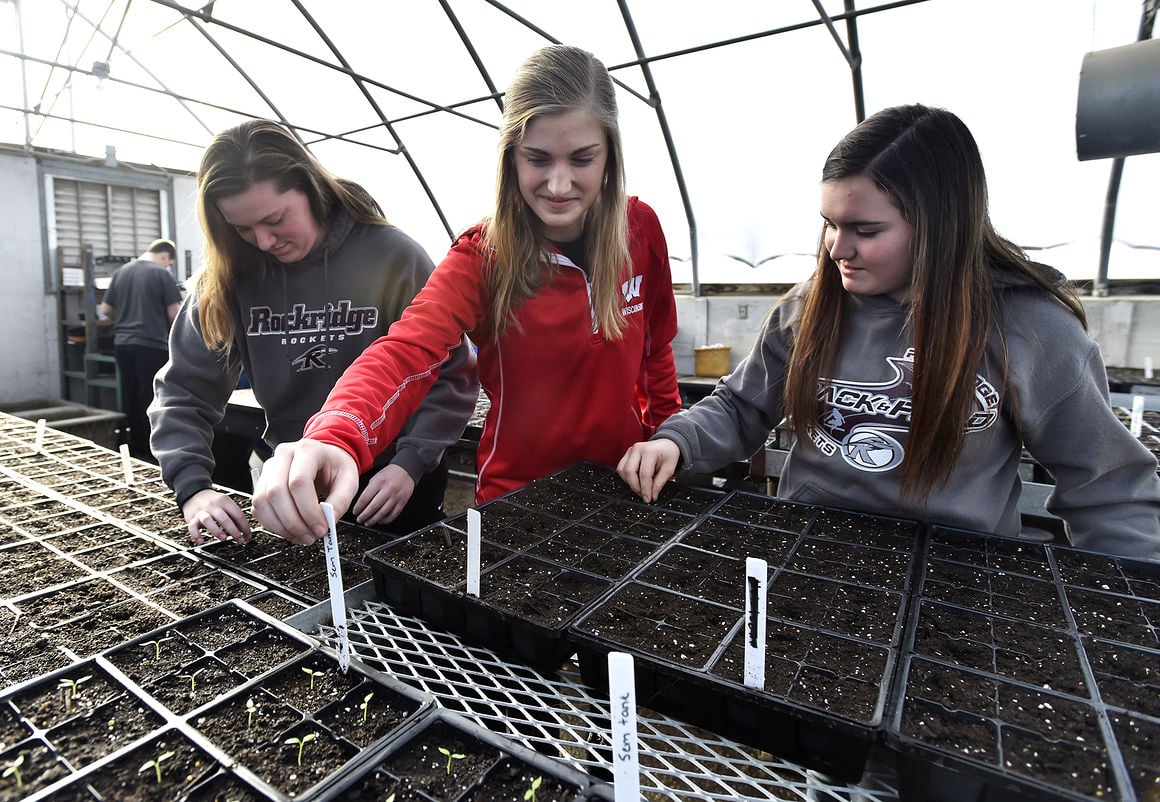 Freshmen Kylee Simons, Mia Freyermuth and Eliza Lilliman tend to the plants in the greenhouse Thursday, April 6, 2017, at the Rockridge High School greenhouse in Taylor Ridge. 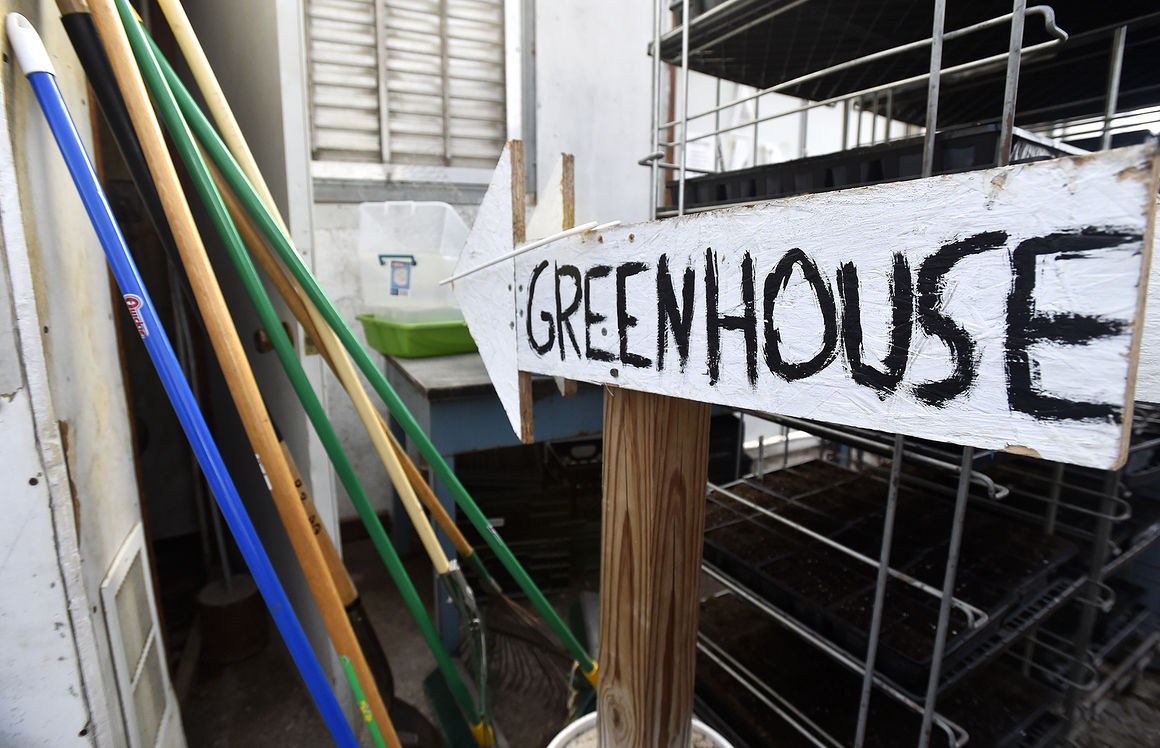 A greenhouse sign sits propped up against a rack of potted seeds Thursday, April 6, 2017, at the Rockridge High School greenhouse in Taylor Ridge.

Dozens of different kinds of plants have begun to sprout at the Rockridge High School greenhouse Thursday, April 6, 2017, in Taylor Ridge.

Freshmen Kylee Simons, Mia Freyermuth and Eliza Lilliman tend to the plants in the greenhouse Thursday, April 6, 2017, at the Rockridge High School greenhouse in Taylor Ridge.

A greenhouse sign sits propped up against a rack of potted seeds Thursday, April 6, 2017, at the Rockridge High School greenhouse in Taylor Ridge.

A small church is providing sizable benefits through its urban gardens in Rock Island.

Spearheaded by one of its elders, Broadway Presbyterian Church, with about 100 members, has been addressing food insecurity, challenges faced by refugees and immigrants and more, by working the soil.

"I'm one piece of a big puzzle," says church elder Brian McMaster. "We're doing it with the help of our friends."

At age 70, McMaster, a retired Palmer College of Chiropractic anatomy teacher, says he is one of the younger members of Broadway Church, so much of the physical work is done by volunteers outside of the church.

McMaster devotes his volunteer time to the gardens, which have blossomed since they first were planted about seven years ago as a way to help refugees in the community. After realizing that some were unable to find work, the church linked senior refugees to a city program that offered land for urban gardens.

"It started out with helping them build their self-esteem," McMaster says of the refugees, who had experience as farmers and gardeners in their homelands or refugee camps and wanted to be productive when they came to the United States.

That first garden, rented from the city of Rock Island for $1 per year, was on a vacant lot about five blocks from Broadway Church. Four Congolese and Nepalese refugee families worked the land, even as they continued to try to find work.

McMaster says some of the refugees speak several languages, but had difficulty with English, a notoriously difficult language to master.

Word spread about the small garden, which eventually led to a larger site on another plot of vacant urban land. This space now is what McMaster refers to as the "International Garden." About 100 African, Nepalese, Burmese and other refugee and immigrant families plant a variety of fruits and vegetables in their own plots in the garden, including some foods used in their native countries that were unavailable or unaffordable locally.

Such is the case with chin baung, translated from Burmese as "sour leaf," a type of hibiscus, or roselle. Just a handful of the leaves — used in stir fry and other dishes — sells for $5-$6 in stores, if it can be found at all, McMaster says.

The plant grows as a perennial in warmer climates, but the refugees were able to obtain seeds and grow the plant as an annual in their Rock Island gardens.

"It's wonderful," McMaster says of the taste of the leaves, which he described as a spicy, licorice-like flavor. Flowers from the plant are used in Mexico and elsewhere to make drinks, he says.

"The plant is used everywhere, except in the United States. We learned about it from them."

McMaster and other volunteers also learned about the hundreds of varieties of eggplant that go far beyond the basic purple variety grown in the Midwest, from tiny eggplants the size of a currant that are eaten raw, to unusual varieties that look like tomatoes with clefts on their sides.

other plants grown in the gardens.

A grant from the U.S. Centers for Disease Control and Prevention to the church and Be Healthy QC helped support the gardens with the appointment of one person to coordinate the efforts. Be Healthy QC seeks to increase access to environments with healthy food options and to physical activity opportunities.

One retiree also has worked to maintain the gardening equipment through the Senior Community Service Employment Program, but otherwise, the gardens are maintained through the work of the gardener families and volunteers.

Activate Rock Island, mission groups and rotary clubs are among those volunteers, while a mysterious supply of plants a few years ago led to a school partnership.

McMaster says church members were finding flats of peppers, tomatoes and other seedlings at the doorstep, with no explanation. Eventually, they found that the plants were donated by the Rockridge High School FFA program, where students had heard about the refugee gardens and wanted to contribute.

The high school has a greenhouse, and McMaster says students from several classes at Rockridge — including introduction to agriculture; greenhouse crop, which is a dual-credit course with Black Hawk College, East Campus; and horticulture science — planted the plants, including those that later grow in the urban gardens, as well as plants that are sold at the Rockridge High School FFA plant sales.

This year, the school will host the plant sale on May 13, and another will be on May 20 at Broadway Presbyterian, 710 23rd Ave., Rock Island.

A school program in Galva, Ill., also donated a trailer full of plants.

"We could not operate without people doing things like that for us," McMaster says.

The urban gardens have expanded to include a site at the Thurgood Marshall Learning Center, which became a community garden tended by volunteers and harvested by neighbors. The school also is becoming more involved.

Another site was added to serve as a test garden to experiment with soil enrichment, techniques and other "best practices."

Last year, the urban gardens produced at least 3 1/2 tons of produce, which helped some 7,000 people "on both sides of the river," McMaster says.

While most feedback about the work has been positive, he says that some people have objected to the appearance of some of the gardens. Many of the growers use practices other than straight rows, such as the Native American technique of "three sisters," or plantings of beans that climb corn, surrounded by squash.

"It's a great growing style that maximizes the land," McMaster says, though one complaint

was that those gardens "don't look 'neat.'"

He says that many of the practices use companion planting and other environmentally friendly methods that any gardener could benefit from knowing. The gardeners also are generous, giving their garden bounty away to neighbors and visitors, McMaster says.

"Spend five minutes in a garden with a refugee,” he says, “and you'll learn a wealth of information.”

Cindy Hadish writes about local foods, farmers markets and the environment at homegrowniowan.com