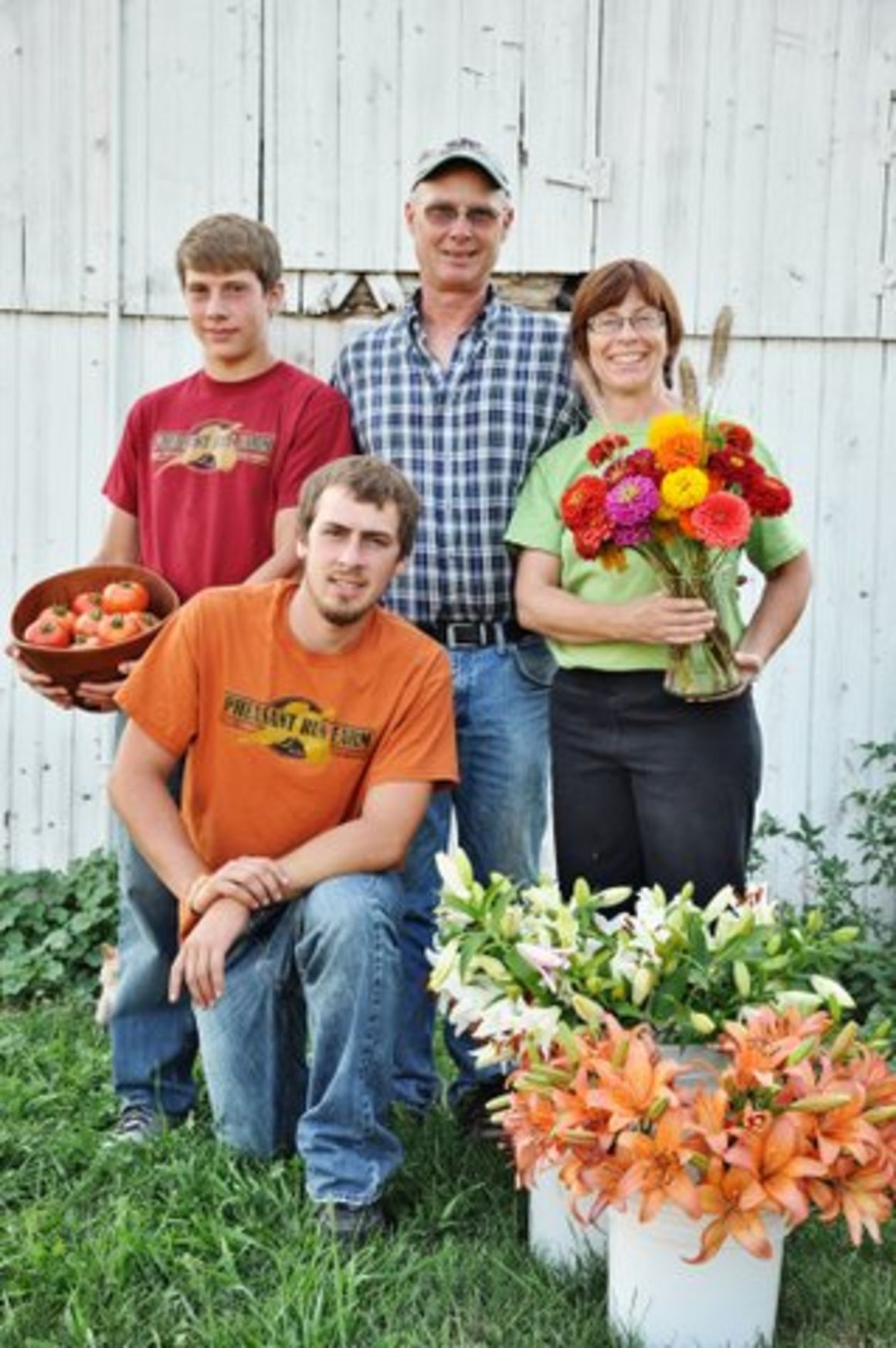 Ann and Eric Franzenburg, along with their three adult children, operate Pheasant Run Farm near Van Horne, Iowa. Pictured are Eric and Ann, Grant, and in the front, Calvin. 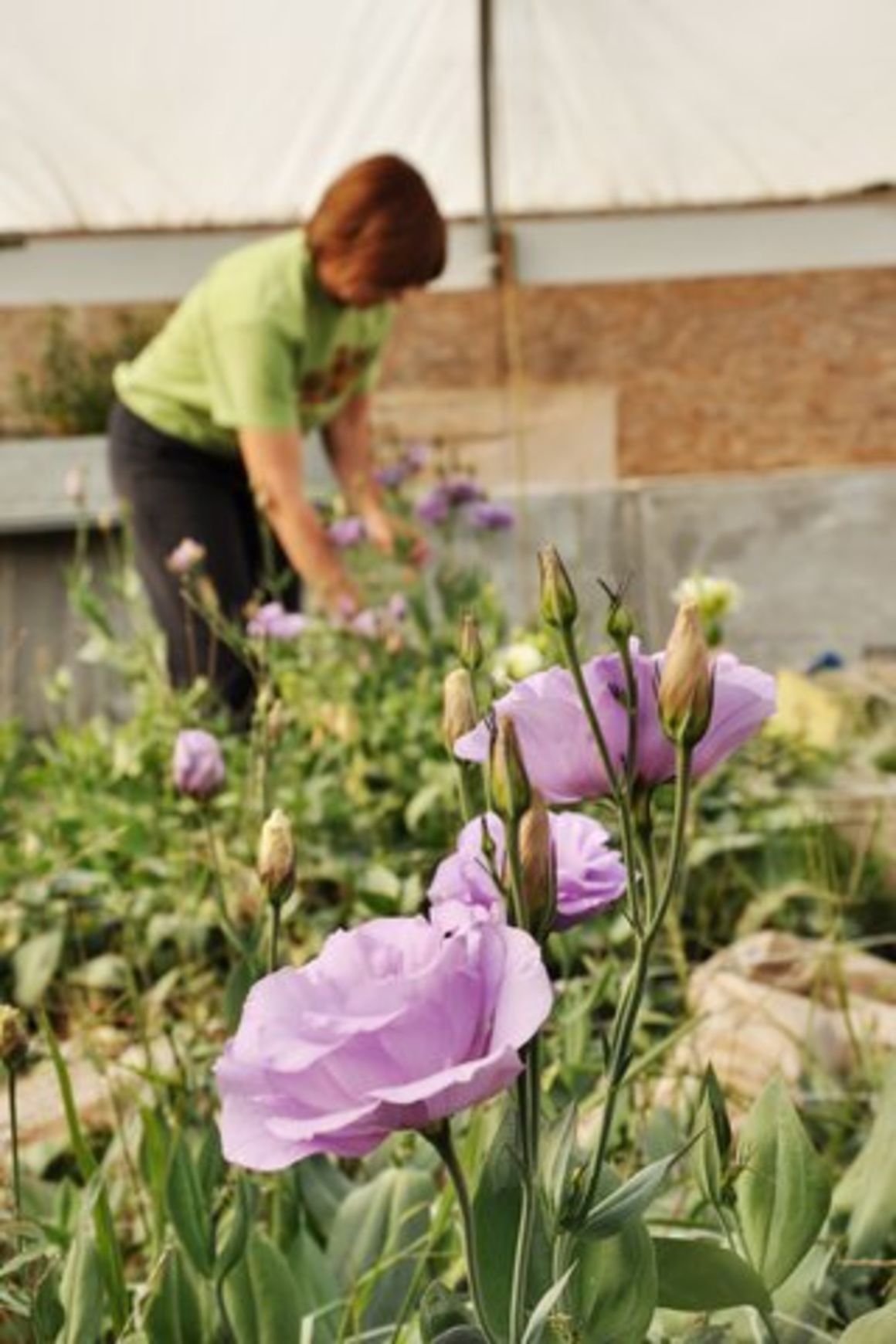 Ann and Eric Franzenburg, along with their three adult children, operate Pheasant Run Farm near Van Horne, Iowa. Pictured are Eric and Ann, Grant, and in the front, Calvin.

As many farmers are forced to expand their operations to stay in business, Ann and Eric Franzenburg found ways to keep their farm small.

Diversification in their products and their buyers has been the key to the success of the farm.

Lilies, snapdragons, zinnias and dahlias are among the many varieties of flowers grown at Pheasant Run, along with niche products, such as miniature "lunchbox" peppers, ginger and Sungold tomatoes. All are raised inside a series of heated greenhouses, where seedlings are planted as early as February.

Pheasant Run also grows traditional row crops of corn and soybeans, as well as culinary and

medicinal herbs, including milk thistle seed, which is sold on the wholesale market. The farm is a rarity, rotating between corn, soybeans and medicinal herbs, so some of the farmland that is in traditional row crops also is certified organic.

Ann says the goal is to achieve the certified organic distinction for the entire farm, even when it comes to the conventional crops, a process that can be time-consuming — extensive documentation is required — and expensive, though the cost can be offset by the additional revenue garnered by organic items.

While the business aspect is one reason to go organic, being good stewards of the land is the Franzenburgs' underlying philosophy.

"We enjoy working in a system where we don't have to worry about being exposed to pesticides," Ann says. "We feel that we don't really 'own' the land; we're just stewards who take care of it, and this is the best way to be stewards of the land for the next generation."

That generation could be at least one of the couple's children. Their son, Calvin, had been

working as an electrician, but decided to farm with his parents. Their daughter, Ellen, helps at

the farmers markets and their youngest child, Grant, just graduated from high school and will be

the farm operation. "They all grew up having to work on the farm," Ann says. "They learned a

good work ethic and how to work together as a group to accomplish a goal."

She and her husband are full-time farmers, but that wasn't always the case. Ann, who grew up on a farm in northwest Iowa, worked as an English and French teacher for years before deciding to put all of her efforts into farming almost 10 years ago, after attending a growers expo that included a daylong series on specialty cut flowers.

"It planted the seed to think it was something I could do and earn a living at," she says.

Specialty Cut Flower Growers. "Because of her, I was a couple years ahead of the game."

Pheasant Run's first flower-growing season was in 2008, the same year an epic flood wiped out

Run sells its cut flowers by the stem.

The farm initially began in 1991 when the couple returned to Eric's family farm, a traditional operation with corn, soybeans and hogs.

They quickly learned that securing additional land was difficult because rent was high and the competition for acres was fierce. "Rather than go into debt to get larger, we decided to investigate alternative crops that might yield more dollars per acre," they note on their website, pheasantrunfarmiowa.com.

Eric, who has a background in agricultural research, was approached about writing a grant

practices for culinary herbs in Iowa.

Before growing flowers, the couple primarily raised tomatoes in a greenhouse. Ann attributes the subsequent growth of their specialty crops to her husband. All of their produce is grown in the greenhouses, too.

"It all started because he doesn't like to see an empty greenhouse," she says, with a laugh.

The two believe the greenhouses provide better quality growing conditions compared to the outdoors, Ann says. The majority of the year, the greenhouses are populated with colorful flowers, including dahlias, plus ginger plants, English greenhouse cucumbers, sunflowers and towering tomato plants that bear fruit beginning in June.

"They're excellent," Ann says of New Pi, which has stores in Iowa City, Cedar Rapids and

Coralville. "They really walk the talk and support local growers."

The majority of Pheasant Run's flowers are sold at farmers markets, including the Downtown

Farmers Market in Cedar Rapids and the Iowa City Farmers Market. Florists also buy direct from the farm, and Ann supplies and designs flowers for weddings and special events.

Teresa Hermsen, owner of Timber Gate Gardens in Belle Plaine, stopped by the farm recently to pick up an order of fragrant lilies and an assortment of other flowers.

being able to buy local. "Her flowers are so much prettier and fuller and fragrant because they