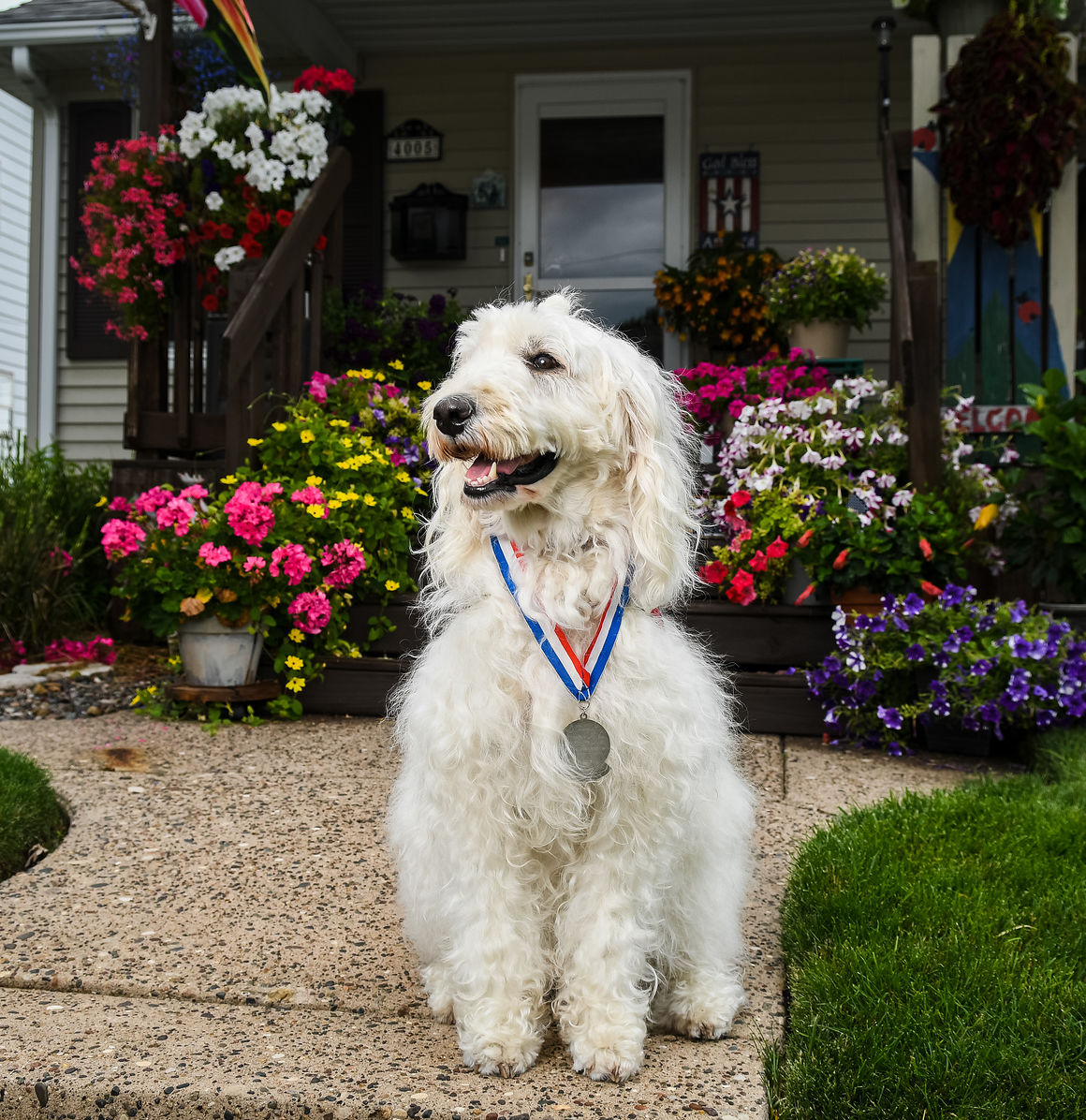 Bailey is the 2017 Radish Pet of the Year. She posed for some photos Monday, July 10, 2017, at her home in Rock Island. The pup was chosen by popular applause at the Radish Healthy Living Fair in June. 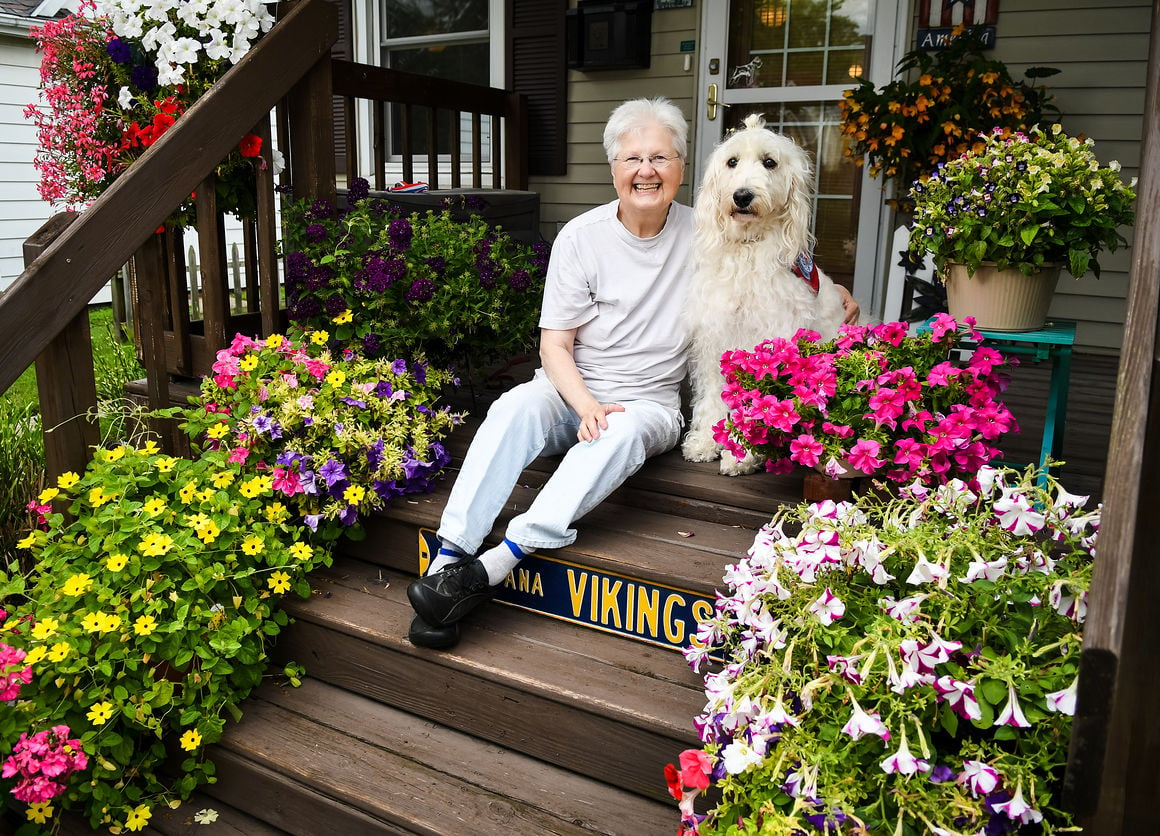 Bailey is the 2017 Radish Pet of the Year. She posed for a photo with her owner, Sharon Cramer, on Monday, July 10, 2017, at their home in Rock Island. The pup was chosen by popular applause at the Radish Healthy Living Fair in June.

Bailey is the 2017 Radish Pet of the Year. She posed for some photos Monday, July 10, 2017, at her home in Rock Island. The pup was chosen by popular applause at the Radish Healthy Living Fair in June.

Bailey is the 2017 Radish Pet of the Year. She posed for a photo with her owner, Sharon Cramer, on Monday, July 10, 2017, at their home in Rock Island. The pup was chosen by popular applause at the Radish Healthy Living Fair in June.

Compassion, trust and a gentle touch embody this year's Radish Pet of the Year dog, Bailey, and her owner, Sharon Cramer.

Bailey, of Rock Island, is a therapy dog, and she has volunteered with Cramer for several years.

Cramer's last dog, a miniature schnauzer, worked alongside her for five years until the pup had to retire because of health issues. Cramer immediately began her search for another therapy dog, she says. There are not enough therapy dog teams to provide the care that is needed, Cramer says, and she knew she could not stop her work in the field — it was her “mission that was strongly God driven,” she says.

Cramer had worked for nearly two decades as a dog obedience trainer, but her calling was changing, and she knew she needed to find the right dog to continue volunteering as a therapy team. When she found Bailey in 2014, a mixed-breed Labradoodle, she knew she could continue her work with the pup.

“When I chose her, she was from a large litter, and all (of the) puppies had curly hair except for Bailey. She has totally straight hair," Cramer says, adding that she was drawn to her because of it.

Bailey also was calm and loving, and she easily was trained in socialization. She also has a heart and soul much like Cramer.

Bailey became a certified therapy dog through the Alliance of Therapy Dogs, a national organization, in June 2015. Therapy dogs are trained to provide love, affection and comfort to people who are in hospitals, retirement homes, nursing homes or hospices, as well as people with special needs and children in schools.

“Bailey does not see needles and bandages; she sees the need for her love and comfort,” Cramer says.

The team ventures out to volunteer about five times a week on their own and as a part of Trinity Caring Canines and Genesis Compassionate Canines. Cramer says the two frequent Memory Care and Silver Cross at Friendship Manor and St. Mary Monastery in Rock Island; Bickford of Moline assisted living; and the Clarissa C. Cook Hospice House in Bettendorf.

As a therapy dog, Bailey can work with hospital patients, people with dementia, children and anyone with special needs. Cramer says she reaches out to the various spots each month to set up a schedule for the two.

No matter the day or situation, Bailey never forgets the people she meets. When she visits familiar faces, "Bailey really lets them know how much she loves them and has missed them," Cramer says. "Maybe an Alzheimer's patient will forget her, but Bailey will not forget them."

Cramer says she and Bailey are a therapy dog team to provide love and comfort to those who need it.

“When we visit hospital patients and they tell us we have made their day, it is our reward for volunteering,” Cramer says.

And the community has not forgotten Bailey’s accomplishments. In her time as a certified therapy dog, she has been named the 2017 Friendship Manor Therapy Dog of the Year; earned the American Kennel Club Silver Medal title for completing 200 facility visits, and she recently earned the American Kennel Club Novice title after competing in the AKC Obedience Trial Ring.

Cramer is a member of Sacred Heart Parish in Rock Island, Ill., and now Bailey is, too. Every Sunday at 9 a.m., you can find the pup at the parish's doors, ready to greet the many congregants who enter. The parishioners really have accepted her as one of their own, Cramer says, playing, laughing and joking with Bailey, and bringing her an assortment of treats and accessories.

“It is my belief that every church, no matter the denomination, needs a certified therapy dog,” Cramer says. “It seems to bring people closer together.”

Cramer says it's been a great experience watching how much success Bailey has had in the church, and it is joyful for her to watch the congregants claim Bailey as their own and as their “church dog.”

Pet of the Year

When Cramer found out Bailey had won Radish's Pet of the Year award, she was stunned and honored. “It actually took me a day or two to realize that this was real and she did win this honor,” she says.

Cramer also agrees that Bailey deserves the honor, as she is “gentle, trustworthy and unflappable” in a time of need or crisis.

The two also have a strong connection built on trust that allows them to read each other's body language, and respond appropriately to the situation at hand, Cramer says.

“Bailey is quite special in many ways.”

Katy Williams is an occasional Radish contributor. Laura Anderson Shaw is the editor of Radish.