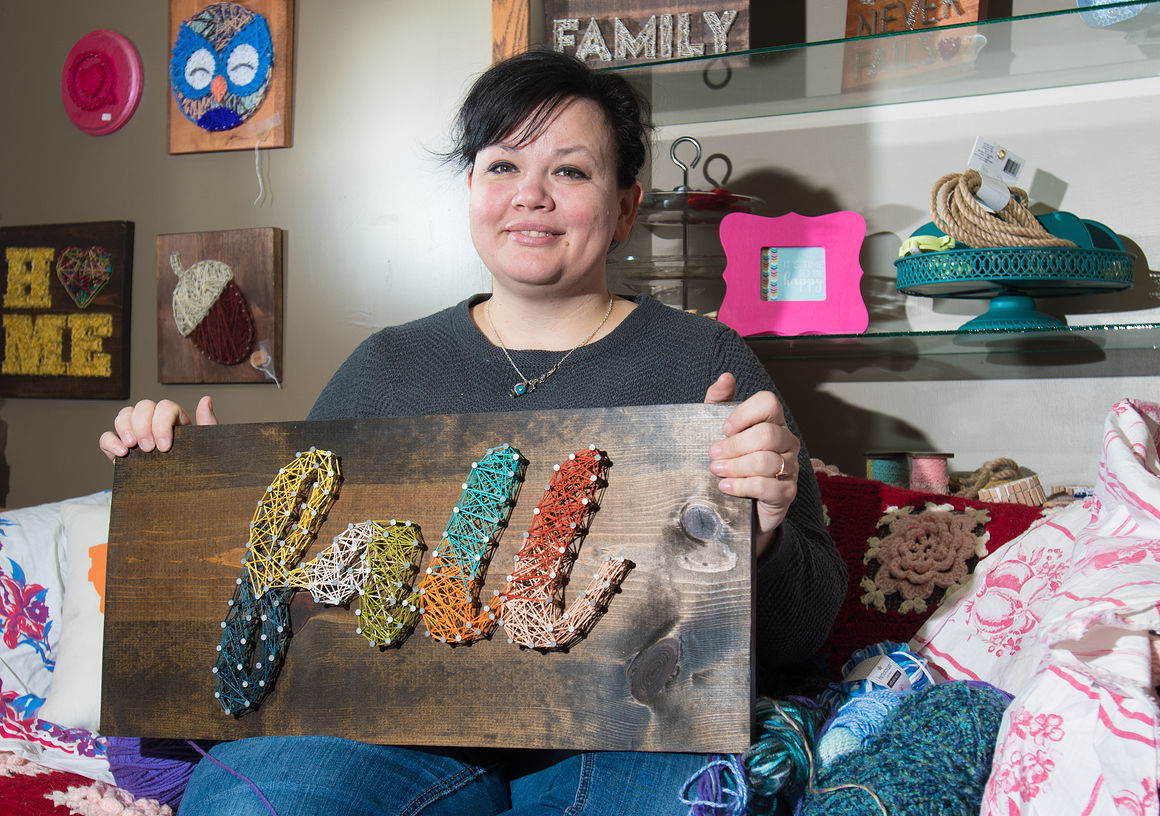 Shawna Fibikar, of Davenport, began her string-art business Strung by Shawna in January 2016. Here, she poses in her Davenport studio with the first board she strung. 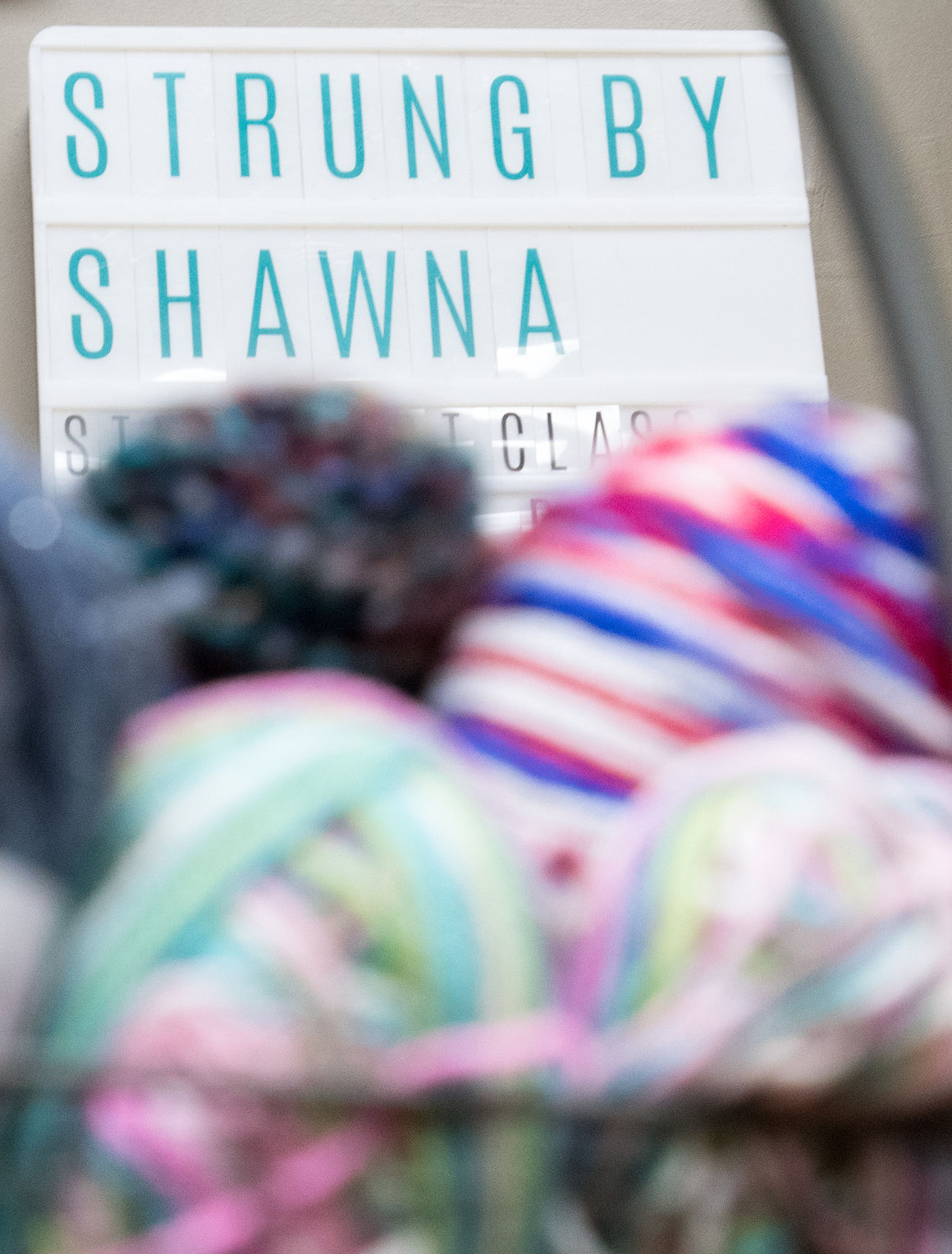 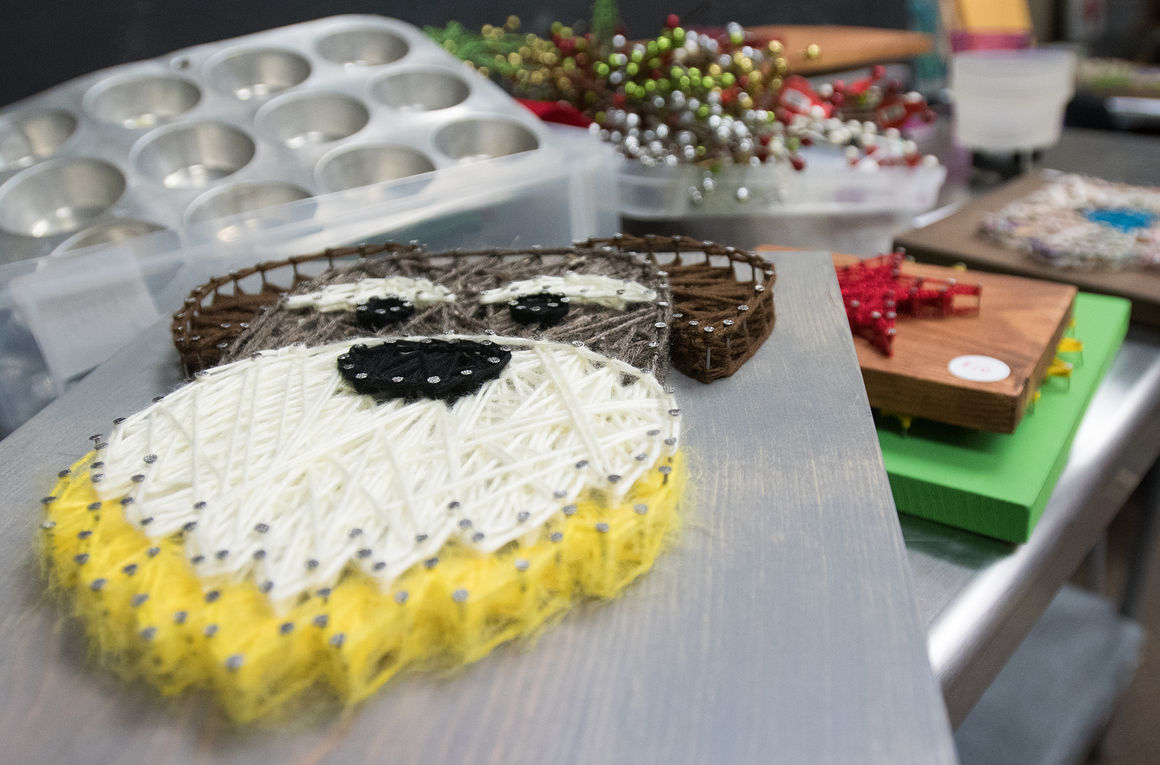 Shawna Fibikar, of Davenport, began her string-art business Strung by Shawna in January 2016. Here, she poses in her Davenport studio with the first board she strung.

With a nail in one hand and a hammer in the other, she makes her way around the board, following the design template she created and marking the spots where she'll soon pound in nails.

"There is something about sitting down with something as simple as a piece of wood, some nails, a design I've created and yarn (or) string that brings me peace," the Davenport woman says.

Fibikar started to make string art toward the end of August 2015. To do so, she designs templates to create pictures or words. Then, she cuts, sands and stains a piece of wood for the design, and uses painter's tape to tack her template to the board. After she marks where the nails ought to go, she removes the template and pounds them in, and then strategically winds yarn between the nails to fill in the design.

Before she stumbled upon string art, she had been searching for popular crafts for a new venture: teaching Pinterest-style craft classes in her free time. She discovered string art in a Pinterest search, she says, and began to teach herself how to do it.

"I found the visual of it very appealing, but the execution of it frustrating," she says. "There was no consistency in how string art was done in the dozen or so resources that I found, so I decided to figure it out myself by trial and error."

After she strung a successful board, she decided to teach a class on it that September. "It was quite ambitious," she says. Four students took the three-hour class, and when the time was up, they hadn't finished pounding the nails into their boards, never mind adding the string.

"Though I left that class knowing I needed to figure out how to streamline the process, the one thing that stuck with me was I had found something that made me ridiculously happy to make," she says. "I created a string monster within myself."

In October 2015, Fibikar decided to string some boards for a craft show during Thanksgiving weekend. She also began to sell her boards at Crafted QC, 217 E. 2nd St., Davenport. At the time, she was doing some freelance web design and social media content management for Q-C businesses, and telecommuting for an advertising agency in Omaha, Neb., as a print/digital project manager. She would work for three weeks in the Q-C, and one week in Omaha.

After finding success selling boards at Crafted QC and the Thanksgiving craft show, Fibikar decided to give teaching string art another shot. By then, she had made and strung about 300 or 400 boards, worked out a lot of kinks and fine-tuned the process, she says.

"It was two-fold with making the decision to starting (Strung by Shawna) with it," she says. She had the opportunity to teach classes at Crafted QC, and she had "an inspiring conversation with a person who had placed a custom order for Christmas. She said she would be willing to gather friends to do a class so I could test my teaching methods," she says.

That class gathered 22 people last January, "and I left that class knowing I could do it. I could go full force in transitioning to teaching full time" with Strung by Shawna, she says. "I quit my jobs and scheduled my first class with Crafted QC" for February. "It sold out in days, and we had to schedule a second class."

Since last January, she has taught more than 2,900 students.

"Though it looks simple, there is a process that makes a difference in something looking done versus great," she says. "It's not just adding string to the nails on a board; it's seeing the potential in those materials that brings it to life."

Fibikar says the projects are for all ages, especially if the particular project is modified for a person's skill level or age. She says she has students as young as 6-years-old in her classes.

Strung by Shawna is a "family business," she says. She designs all of the templates herself, including customized requests, such as pet portraits. "My 19-year-old son, Chandler, helps cut all of the wood, and he hand sands and hand stains everything, too. He steps up to help (make kits) when needed," she says.

Her assistant, Chelsea, helps her with larger classes, admin work and making kits, too.

She teaches classes within a three-hour radius of the Q-C, she says. A list of upcoming classes is available in the events section of her Facebook page, facebook.com/strungbyshawna.

Her classes run between $40 and $45 per person, depending on the design, and all materials are included except for the hammer. Kits including a template, board, yarn, nails and illustrated instructions run $35-$45, and custom orders vary based on the design, she says.

Fibikar crafted this year's Radish Awards using materials from the Radish region. The boards were cut from wood salvaged from a 100-plus-year-old barn in Mechanicsville, Iowa, and the yarn is hand-dyed merino wool from Stitch Together in Marion, Iowa.

A year into her new business venture, Fibikar says she is feeling solid in her class offerings and has plans to open a website and an Etsy shop, where she will take custom orders and offer finished boards, DIY kits and printable templates.

"I'm able to create something from my heart," she says. "This adds joy to my day knowing I'm making something or teaching another person to make something that they will love to have in their home or share with a friend (or) family member."

Laura Anderson Shaw is the editor of Radish.