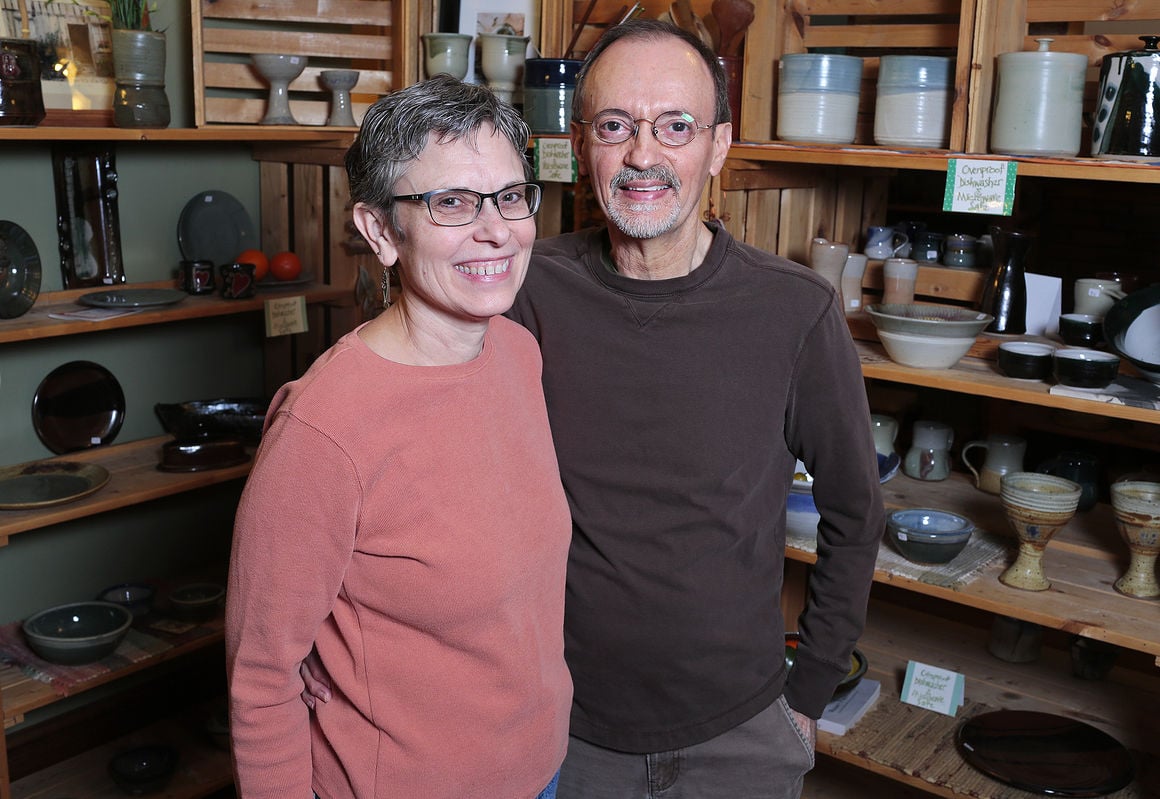 Dorothy Beach and her husband Dan Lawrence, of Dot's Pots in Moline, stand amongst their creations in their pottery shop Monday, March 6, 2017, in Moline. 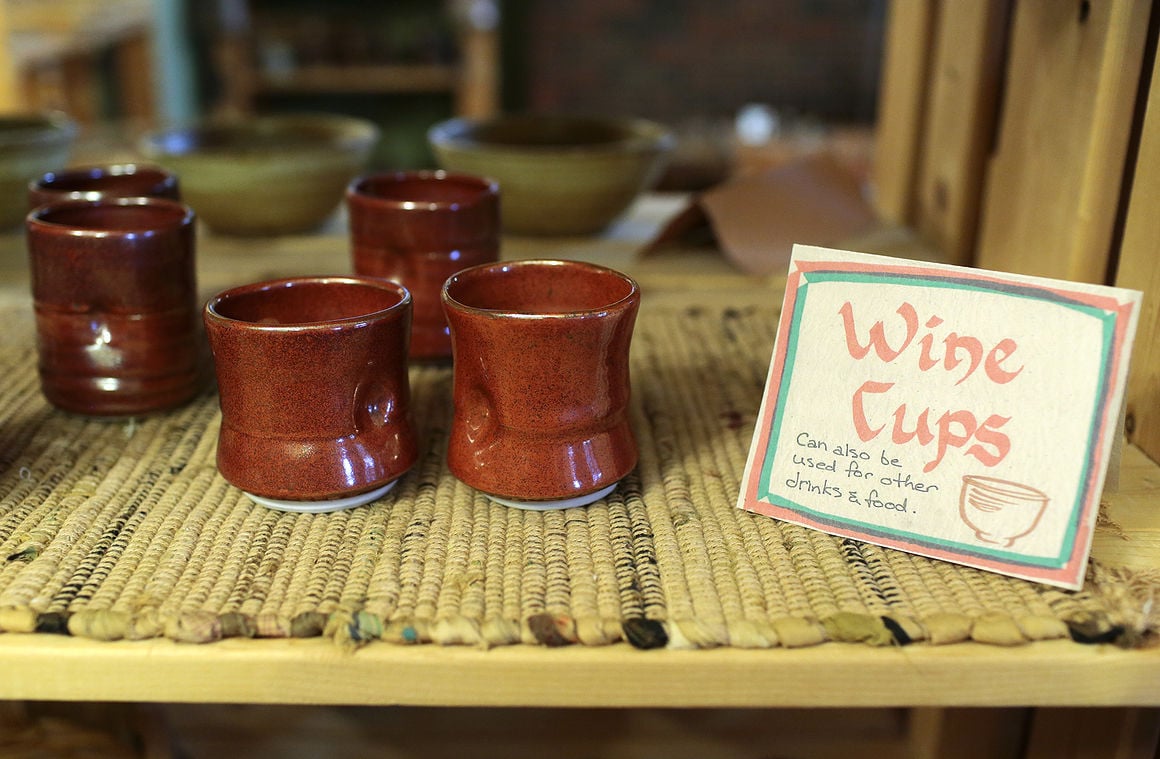 Wine cups that Dorothy Beach and her husband Dan Lawrence, of Dot's Pots in Moline, make and sell at their pottery shop Monday, March 6, 2017, in Moline. 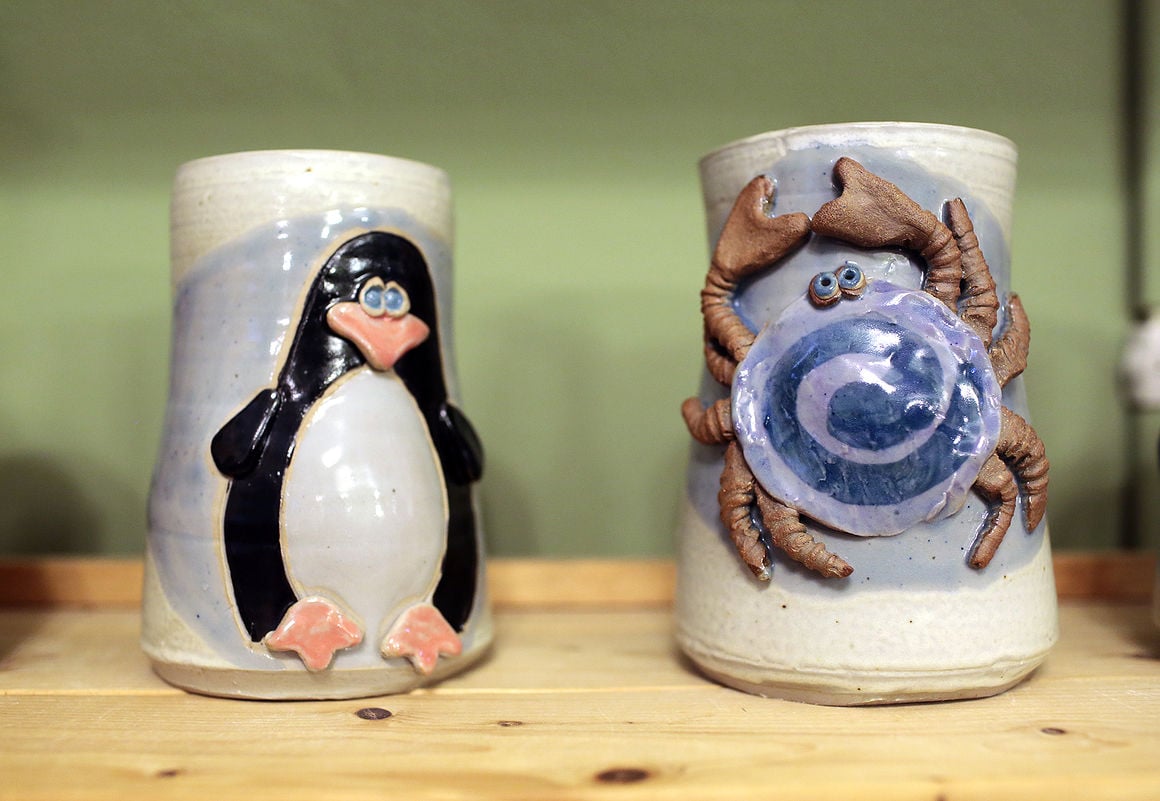 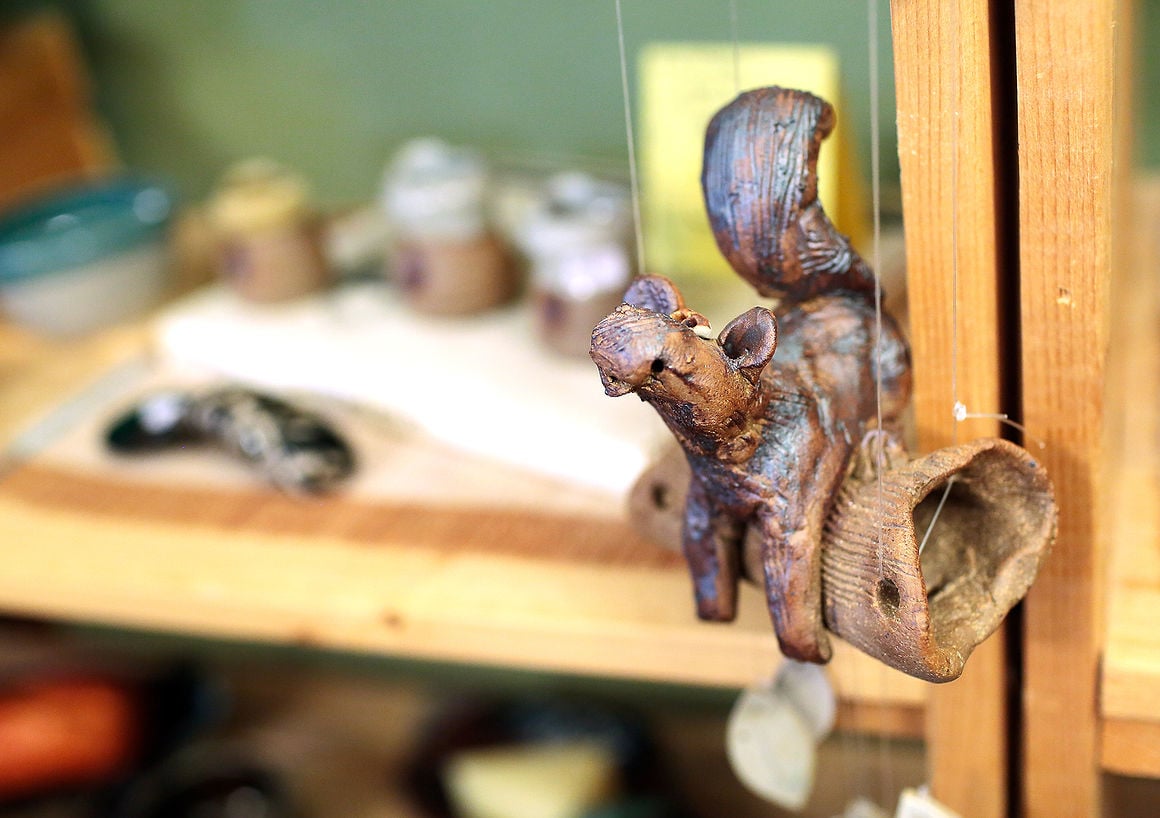 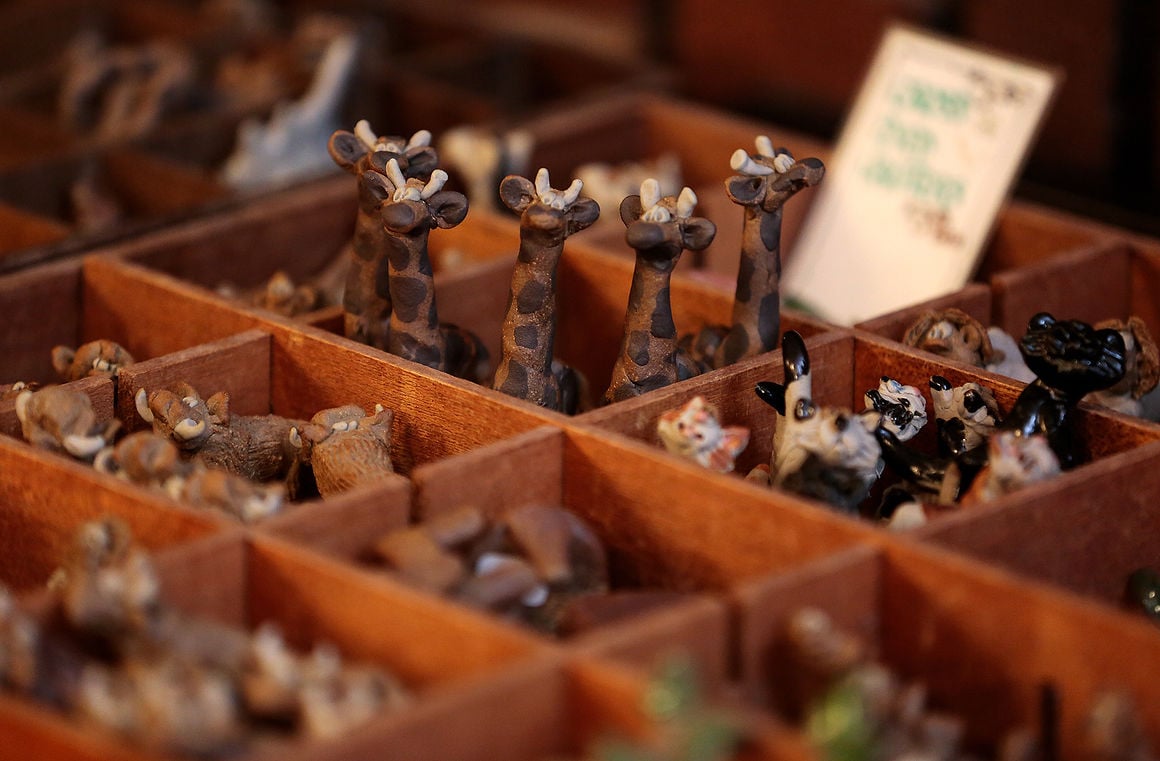 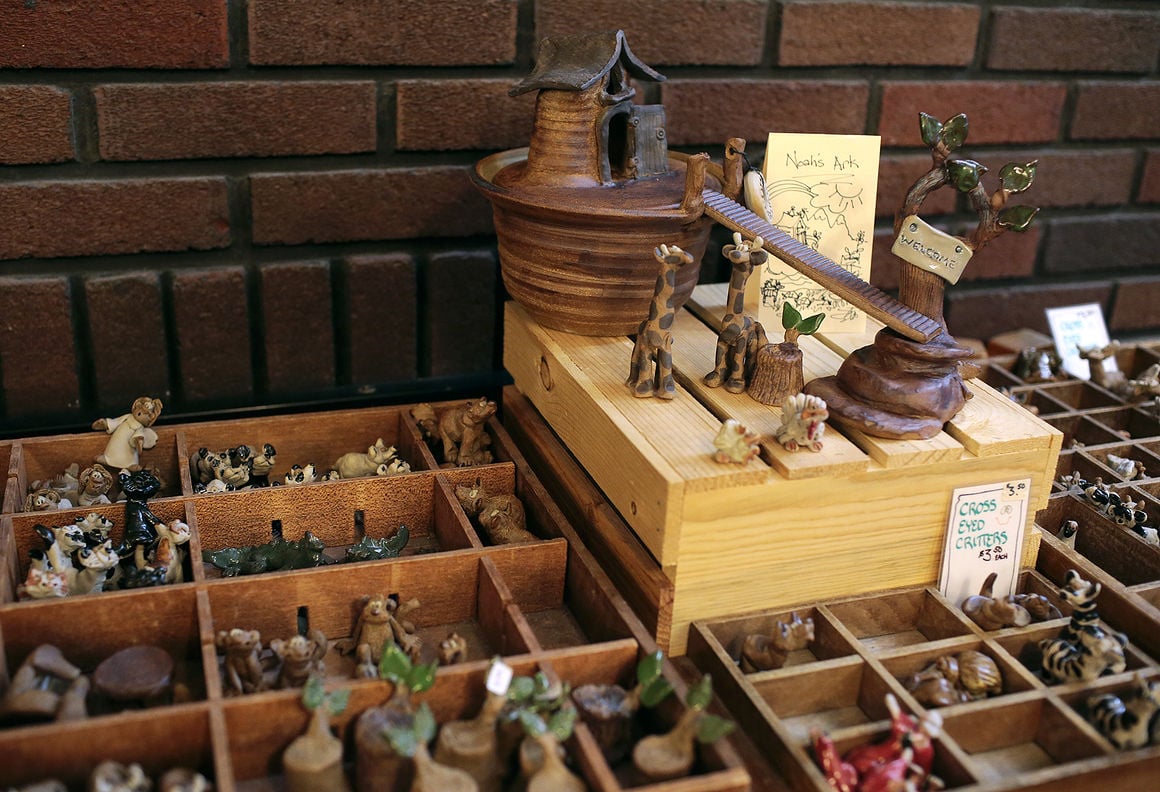 Miniatures made by Dorothy Beach and her husband Dan Lawrence sold at their pottery shop Dot's Pots Monday, March 6, 2017, in Moline. 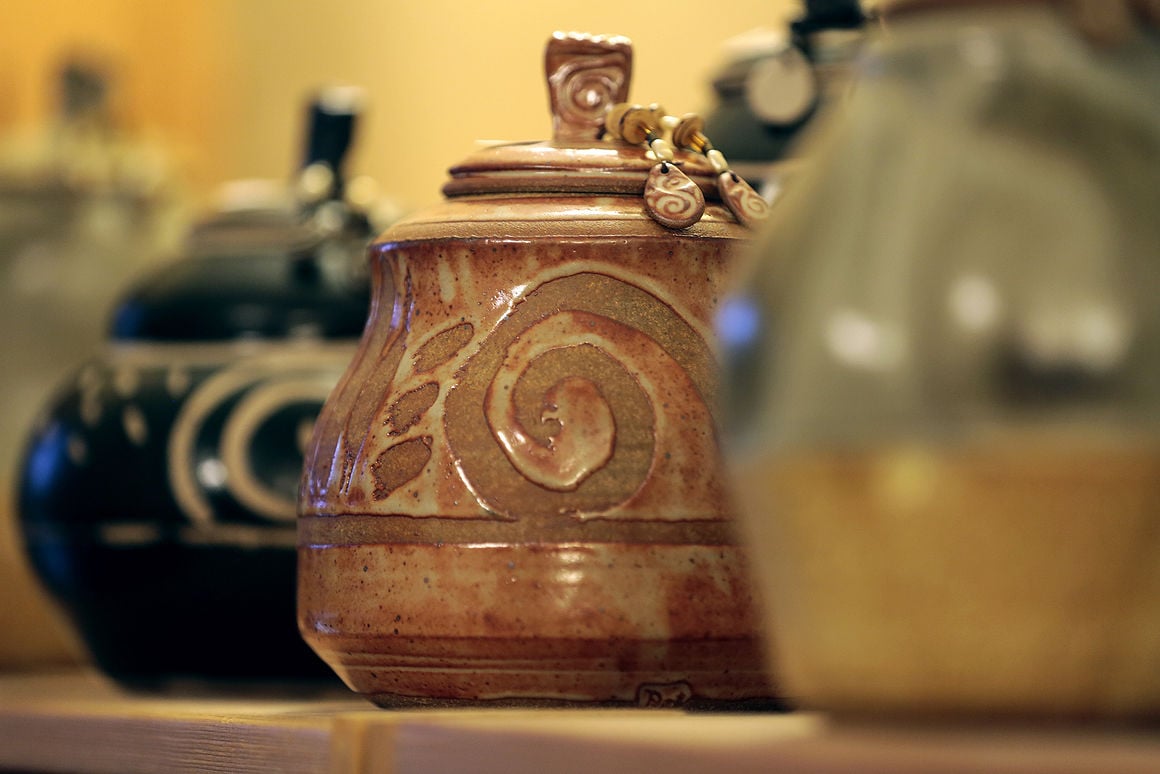 Dorothy Beach and her husband Dan Lawrence, of Dot's Pots in Moline, stand amongst their creations in their pottery shop Monday, March 6, 2017, in Moline.

Wine cups that Dorothy Beach and her husband Dan Lawrence, of Dot's Pots in Moline, make and sell at their pottery shop Monday, March 6, 2017, in Moline.

Miniatures made by Dorothy Beach and her husband Dan Lawrence sold at their pottery shop Dot's Pots Monday, March 6, 2017, in Moline.

Dorothy Beach has lived and sold her life’s work at the same location for 20 years now. Don’t recognize the name? Perhaps you’re familiar with Dot’s Pots, which offers functional and whimsical clay creations in a quaint bungalow in Moline.

“We’re not just mugs and bowls,” says co-owner and "the other half of Dot's Pots," Dan Lawrence.

He’s right. From the moment you walk into their store, you see the talent in each piece. Every item of varied pottery — from water fountains to udu drums, animal figurines, platters, miniatures, plates, vases and more — has such intricate and interesting detail.

Beach, who contains an infectious bubbly personality, studied clay work in college, and when she returned to the Quad-Cities after spending two years in Italy, she ran the Pottery Guild of the Davenport Art Gallery. She met Lawrence during the time he was enrolled in classes there.

She traveled and sold her pottery throughout the Midwest for a while — up to 25 fairs each year. When that went well, Beach rented a location in Moline to see if even more success was in store.

And there was. After two years, she knew it was time to put down permanent roots in the current location.

“The work we do is decorative and functional,” Lawrence says. “People think it’s pottery from the 1960s. No, we do a lot more.”

“I realize it’s different than everyone else’s,” Beach says. She is a master at her work; each piece is as detailed as the next.

Her pottery and the couple's store are unique. For example, Beach, the outgoing one of the pair, doesn’t know a stranger. And why not? You’re walking into their home; the two live and work on-site.

As we chat, sure enough, visitors walk in. One brought a large sycamore leaf in which Beach will turn into clay, fascinating work once complete.

Beach, who used to make her own clay until it became too cumbersome, uses stoneware, porcelain blend and raku clay. All of her pieces are, of course, made by hand. “I love that you’re not using paper plates or Styrofoam,” says Beach. “Clay is part of the earth — including the glazes we use, which are silica and cobalt, and our colorants are oxides from the ground.”

One misunderstanding is that her clay projects can be made in a day or two. “This is a long process,” Lawrence says.

When she finishes her pieces, they’re left to dry, which can take weeks. They are fired for several hours in an electric kiln at 1,730 degrees, which removes the physical and chemical water so  they can be glazed without returning to mud and breaking. The pieces are then left to cool, which can take days. Then, Beach mixes her own glazes and paints each piece by hand. They are fired again for hours in a gas kiln of 2,300 degrees or higher, then again left to cool completely.

Their life surrounding the earth’s ingredients coincide with living a simple life. Both Beach and Lawrence prefer to function without computers or smartphones. Their business does not have a website; instead, it mainly is found by word-of-mouth.

“We really want to create with clay,” Beach says. “If we stared at a monitor or on our phones, that would just suck our time away.”

In addition to her pottery, Beach also donates her talents each year to mark the annual International Women's Day, a global day celebrating the social, economic, cultural and political achievements of women. On March 11, Dot’s Pots celebrated by handing out handmade crocheted flowers to women who visited the store.

“When I was in Italy, it was tradition for women to hand out and receive flowers on this day. So I thought, ‘Why not start it here?’”

Beach and Lawrence also host two open houses each year where you can’t help but feel as though you’re part of the Dot’s Pots family — even if you don’t know anyone there. In July, their backyard is turned into a laid-back party with live music and baked goods.

The two appreciate their customers and recognize their importance.

“A lot of people have asked why we didn’t move to an arts-centered city like Iowa City, but this is where we’ve been for so many years; this is a simpler life," Beach says. "It’s a different type of life, with lots of friends.”