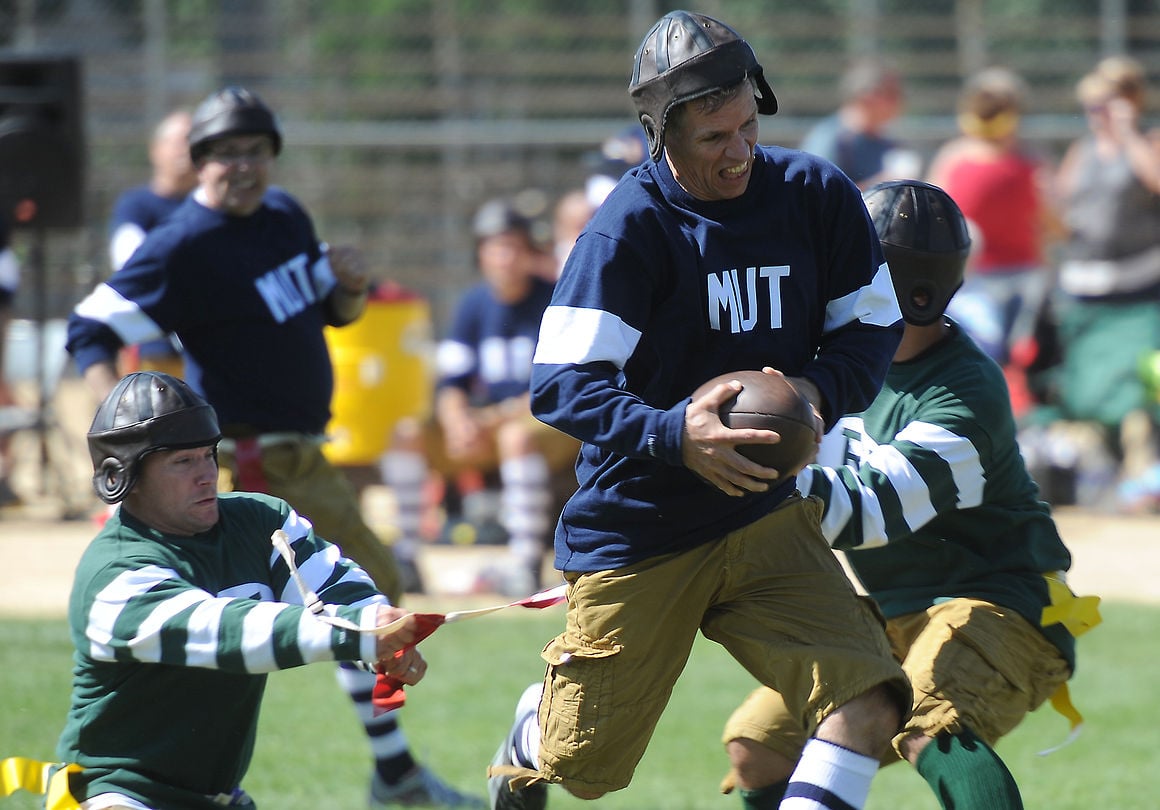 Moline Universal Tractor quarterback John Roche tries to evade a tackle during a "vintage" football game against the Rock Island Independents on Sunday, Aug. 23, 2015, at Douglas Park in Rock Island. Rock Island ended up on top 24-0. 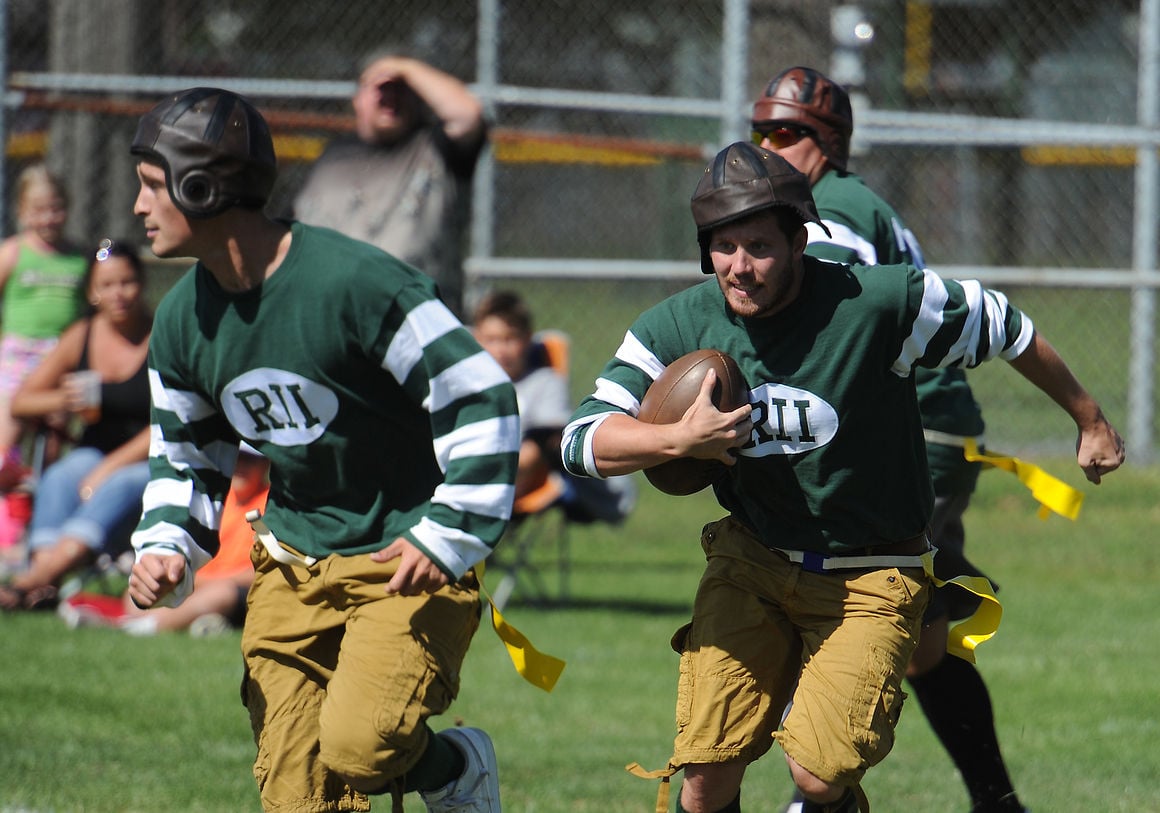 Christopher Podunajec, sports recreation manager for the city of Rock Island, tries his hand at bringing the ball downfield against the Moline Universal Tractor team during a "vintage" football game on Sunday, Aug. 23, 2015, at Douglas Park in Rock Island. The Rock Island Independents ended up on top 24-0.

ROCK ISLAND -- On a sun-kissed Sunday in a park that once was home to a National Football League team, history successfully came to life.

From the vintage uniforms to the antique automobiles that gracefully dotted the outskirts of historic Douglas Park, the 1920s-style football game was a success on all fronts.

A large and interested crowd gathered to witness the Rock Island Independents defeat the Moline Universal Tractors 24-0. The game's outcome mattered least on the day, though both sides gave maximum effort in the flag-football version of 1920s professional football.

The teams selected to represent the era were the Independents and the Universal Tractors, both of which existed in 1920. The Independents grew from a small neighborhood team to become one of the original members of the National Football League when it was formed in 1920.

The event was the dream of two men, Rock Island's Simon Herrera and Moline's Chris Zimmerman, who recruited the players for the re-created teams. It also depended on the combined efforts of the parks and recreation departments of Moline and Rock Island, and of many volunteers who realize the place in NFL history Douglas Park and the Independents hold.

"I kind of trash-talked Simon 1920s-style (in) that first email exchange over a year ago,'' said Zimmerman, who hopes there will be a year two and beyond for the cross-town football battle. "I sure hope I don't have to wait 95 years to get revenge.''

Judging by the size of the crowd Sunday, the community bought in to what Herrera and Zimmerman had in mind. To their credit, they kept things as much like the 1920s as possible, and they invited and recognized relatives of original Independents players and administrators.

The vintage uniforms were off-the-charts cool; the balloon-like football of the era proved to be a challenge; and the rules of 1920s professional football  were followed and explained to the crowd. The day was vintage, down to the newsboy trio who handed out programs and the antique-car-club members who dressed in the styles of the era. And let us not forget the amazing national anthem performed by the Tractors' Matt Sivertson.

"I wouldn't have missed this for anything,'' said Universal Tractors player Kameron Rummans, who was a standout lineman in his playing days at Alleman High School. "Most linemen are mutts anyway, so the name on the shirt (MUT) fits. What a great idea.''

Rock Island's Tremier Morrow grew up near Douglas Park. The Marines took him from the Quad-Cities for several years, but he couldn't pass up one more chance to play at Douglas Park.

"I grew up here, played here as a younger man and now I have had the opportunity to play on the Douglas Park field as an adult,'' he said. "I would have done this just for the uniform; it's that neat. No, I count myself lucky to be back at Douglas Park and part of history.''

The significance of the day was not lost on 47-year-old Mark VanEarwage. The Rock Island man is the grandson of Chet Widerquist, who was a standout with the Independents in the 1920s.

"I know a lot about those days,'' said VanEarwage, a standout pitcher in his baseball-playing days. His work on the offensive and defensive lines Sunday was a big reason his club came away with the victory. "And my grandfather is why I am out here.''

If Sunday was a test for all who brought the game to life, they passed. If the goal is to make Sunday's game an annual event, there will be nicks and small cuts that must be fixed but nothing major. Keeping any future games at Douglas Park is a must.

Herrera -- who scored the game's first two touchdowns -- Zimmerman and the many others who brought the game to life should push on. The game should become an annual one, held about this time every year.

Then maybe Zimmerman and the boys from Moline won't have to wait 95 years for revenge.

Moline Universal Tractor quarterback John Roche tries to evade a tackle during a "vintage" football game against the Rock Island Independents on Sunday, Aug. 23, 2015, at Douglas Park in Rock Island. Rock Island ended up on top 24-0.

Christopher Podunajec, sports recreation manager for the city of Rock Island, tries his hand at bringing the ball downfield against the Moline Universal Tractor team during a "vintage" football game on Sunday, Aug. 23, 2015, at Douglas Park in Rock Island. The Rock Island Independents ended up on top 24-0.