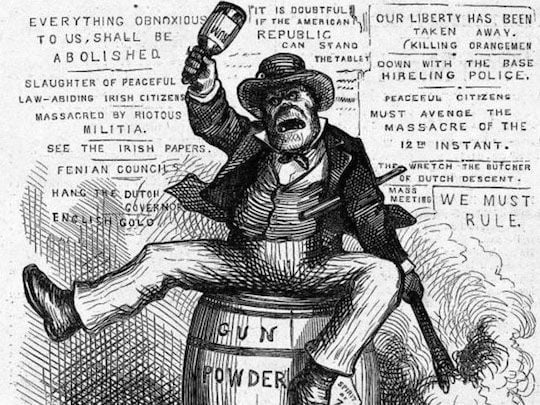 This political cartoon captioned “The Usual Irish Way of Doing Things” by Thomas Nast appeared in  Harper's Weekly in 1871.

John Donald O'Shea is a retired circuit court judge and a columnist for The Dispatch-Argus.

Democratic presidential candidate Marianne Williamson, interviewed on CNN, says that she wants a "reparations council made up of 30 to 50 people who are descendants of American slaves."

She also proposes that $200 billion to $500 billion be dispersed over a period of 20 years. Her council would decide how the money is disbursed, with the stipulation that the funds would be used for "economic and education renewal" -- whatever that is. Sens. Elizabeth Warren and Cory Booker have also indicated support for the concept of reparations.

Rep. Tulsi Gabbard is a cosponsor of legislation in Congress to study and develop a reparations proposals. Sen. Bernie Sanders is a co-sponsor for the Senate version of the bill. Sen. Kamala Harris says she supports reparations.

Beto O'Rourke is "open to considering some form of reparations." Warren has gone one step further, saying that reparations for Native Americans should be a part of the reparation conversation as well.

As a former Democrat and a strong believer in "equal protection," I support and thoroughly endorse reparations for both groups -- so long as the aforementioned Democratic candidates are willing to modify their otherwise inane proposals to include reparations to the descendants of oppressed Irishmen.

That, of course, would include me, since my grandfather came from the "Old Sod." I think our government should hand out big bushel baskets of $100 bills to every person of Irish descent in America.

Furthermore, I think the government of Great Britain should also kick in. Because history is no longer seriously taught in our schools, few Americans realize the sad plight of the 19th century Irish small farmer, both before and after he came to America.

From 1846 through the mid-1850s, the Irish potato crop suffered a devastating blight. This fungus was transported to Ireland from the Eastern United States.

In 1846, three-quarters of the Irish potato crop had failed. Three million rural Irish were left to starve -- even though Ireland at this time grew abundant wheat, beef cattle and other livestock.

Throughout the famine, the British continued the export of Irish foodstuffs, notwithstanding the starvation of the Irish people. To exacerbate the situation, Irish farmers, unable to pay their rents owing to the crop failure, were evicted by their English landlords.

To escape starvation, Irish peasant emigrated to America. Coming from rural backgrounds, most lacked the necessary skills required by industrializing America. They had to take unskilled jobs, paving the streets and digging the canals, while the women were forced into menial jobs as maids and laundresses.

And there was prejudice against the Irish. America was largely Protestant. The Irish were Catholics. Many Americans believed the Irish owed their allegiance to the Pope.

Additionally, the Irish immigrants threatened to take jobs from American citizens. Fearing that they would also take political power, there was a backlash, which produced the Know-Nothing Party, whose very reason for being was anti-immigration xenophobia.

"Help Wanted" signs were modified to add, "No Irish need apply!" Then came the Civil War. As Irishmen disembarked, they were met by Union military recruiters who offered them $300 to join the Union Army. And they did.

Irish regiments were formed: the New York 63rd, 69th, and 88th and the 116th Pennsylvania. Soon they were grouped into the Irish Brigade. Over 150,000 Irish, who had never owned a slave, fought for the Union cause.

Irish losses in the Civil War and in WWI each totaled about 35,000. Irish men were "welcomed" into America to serve as cannon fodder. Unlike the immigrants crossing our southern border today, the 19th century Irish got no food stamps, no free housing and no free medical care.

And of course, once you provide people of Irish descent with reparations, don't forget the Jewish people.

I can distinctly remember as a boy the prejudice in America against people of the Jewish faith. There weren't welcomed in many of the best country clubs. A few blocks from our home, they had to build their own Jewish country club.

So, do I really believe in reparations? No. But if you are going to give them to one group, equal protection should require they be given to any group that America was not fair to at any time. But, of course, when you provide free housing, food stamps, education and medical care to any group for any prolonged period, isn't that a sort of pre-reparation?

The Super Bowl's halftime show has left me reeling.

Column: Moderates are winning over Democrats

Most of the media focus after a presidential primary naturally falls on who won, who did better than expected, who quit and whose candle is da…

Column: It's no longer the 'good old days'

At this point, it feels futile to even try to use facts to debunk the half-truths and outright lies President Trump presented during his State…

As I often do when the weather is nice and the sun is shining in January or February, I grabbed my camera and went eagle watching the Sunday b…

R0: How scientists quantify the intensity of an outbreak like coronavirus and its pandemic potential

(The Conversation is an independent and nonprofit source of news, analysis and commentary from academic experts.)

Troy Price sounded like a man with vindication in his future.

This political cartoon captioned “The Usual Irish Way of Doing Things” by Thomas Nast appeared in  Harper's Weekly in 1871.

John Donald O'Shea is a retired circuit court judge and a columnist for The Dispatch-Argus.