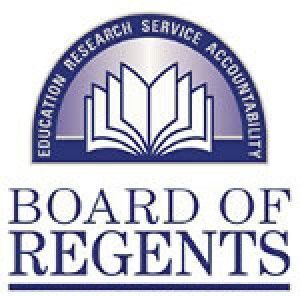 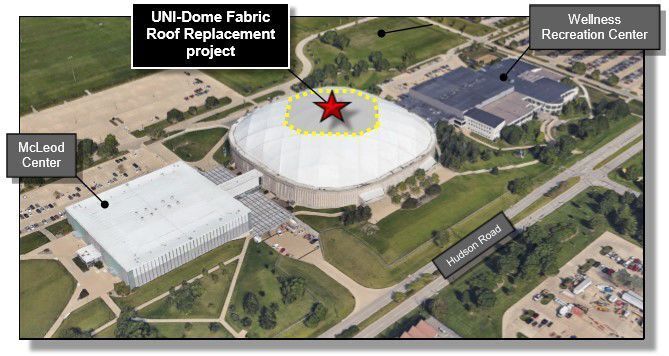 A graphic shows the fabric portion of the UNI-Dome roof that would be replaced. The material was installed in 1999.

CEDAR FALLS — The University of Northern Iowa is looking at replacing a central section of the UNI-Dome roof two decades after it was installed.

Estimated to cost $7 million-$8 million, the project received permission to move forward with planning this week from the Iowa Board of Regents’ property and facilities committee. Regents are expected to approve it Wednesday as part of the consent agenda when they meet virtually starting at 10:30 a.m.

“It’s just the fabric portion ... the center portion of the roof,” Michael Hager, UNI’s senior vice president for finance and operations, told the committee. The other part of the roof is PVC, a synthetic plastic polymer, and was installed in 2010. “The remainder of the roof is still under warranty” until 2040.

The fabric, which accounts for 25% of the surface, was found to be deteriorating in December 2019 by a consultant UNI hired. Minor repairs were done last year, but it needs to be completely replaced by 2024.

“That fabric was last replaced in ‘99 and it lasted 23 years,” Hager said, after the UNI-Dome opened in 1976. “This particular fabric we’re moving into year 22, so we’re approaching (the end of) the useful life.”

Board documents say a better fabric will replace the current material. In addition, maintenance would be performed on the support structure, more safety lines and anchor points would be installed, and roofs over the main entrances would be updated.

Money to pay for the improvements could come from several sources. Those include gifts, the fieldhouse fund, the general fund and the athletic department.

“We haven’t finalized the source of funding yet,” said Hager. “The next step would be to hire a design professional for the project.”

Prior to installation of the current fabric roof in 1999, the UNI-Dome had a full-size air-supported fabric roof system — the first for an indoor stadium in the U.S. At that point, the outer portion of the roof was converted to metal.

That was later damaged by hail and replaced with the current white PVC in 2010.

More information about the meeting can be found online at iowaregents.edu.

Try out our Editor's Special - Full year for just $26

I'm proud of the award-winning work of the staff of The Courier, and I'm eager to share it with you.

Track COVID-19 testing progress across the US

A graphic shows the fabric portion of the UNI-Dome roof that would be replaced. The material was installed in 1999.