Those are among the dozens of items — some celebrated and others obscure — that belonged to renowned musicians with Illinois connections and are now on loan to the Abraham Lincoln Presidential Library and Museum in Springfield for its exhibit: “The State of Sound: A World of Music from Illinois.”

The displays laid out in a 3,000-square-foot gallery show the prominence and sweep of Illinois’ place in music history — which extends well beyond Chicago.

“We wanted to be as comprehensive throughout the entire state as we could,” said Lance Tawzer, a former Chicago-area musician who is the director of exhibits and shows at the Lincoln museum. “Some of the stories that really jump out to me are like Dan Fogelberg from Peoria, REO Speedwagon from Champaign, Cheap Trick from Rockford, Miles Davis from Alton, Illinois.”

Former longtime Chicago Sun-Times reporter Dave Hoekstra, who helped write copy for the exhibit, says “The State of Sound” is the most diverse collection of Illinois music history he’s ever seen in a museum. while acknowledging that individual genres have been highlighted in shows such as the Chicago History Museum’s blues exhibit.

“The State of Sound” exhibit showcases artists with Illinois ties from over a dozen musical genres, from gospel, country and soul to house music, industrial metal, and hip hop. Instruments, wardrobes, platinum records and other material are on loan from the artists or their families. Visitors are also able to view mini documentaries and listen to podcasts about the musicians’ impact on the music world.

Tawzer said the exhibit has expanded the museum’s reach beyond those who are only interested in the nation’s 16th president.

“People sometimes come in and they go, ‘Oh, I thought I was only supposed to learn about Lincoln when I walked through this door,’ and it allows us to sort of demonstrate that we can tell other stories here,” he said, sitting in a mock radio studio within the exhibit equipped with turntables and an old mixing board.

The exhibit is designed to give the feeling of being behind-the-scenes at the Grammy Awards or a live concert. A TV screen shows looping footage depicting roadies wheeling in gear for a gig. Another screen shows semitrailer trucks backing into the rear of what looks like a concert venue to unload equipment.

“The texture of the space was designed essentially to create this idea that you’re sort of making your way through a backstage area, sort of discovering these different artists,” Tawzer said. “But the impetus of the idea was that we felt ... the musicians from Illinois, it was a good story, that it would create this sense that we had offered the world some amazing stuff.”

That story is told through the array of instruments on display, from jazz legend Miles Davis’ trumpet to Chicago bluesman Howlin’ Wolf’s 1950s-era harmonica. Or through a silver, black and red band member costume from Chicago funk collective Earth, Wind & Fire, a skull and bones microphone stand from Chicago industrial metal pioneers Ministry and a Prada suit worn by Chicago hip hop artist Common from when he performed at the 2015 Academy Awards.

But these props only tell part of the story of these musicians, said Hoekstra.

“You can have so many guitars,” he said. “But I think that what registered to me ... is just the stuff that humanizes them.”

Hoekstra pointed to pieces tied to John Prine, the country folk legend who grew up in Maywood and died last year of complications from COVID-19. A few months after his death, Illinois Gov. J.B. Pritzker named Prine as the state’s first honorary poet laureate.

On display at the museum are mementos that Prine’s crew would set up behind him on stage as he performed for “comfort and emotional support as he faced large audiences,” according to the exhibit. Those include a hot dog trophy (Prine loved hot dogs), an Archie comic book, family photos, a toy plastic motorcycle, toothpicks still in plastic, a pair of glasses, a quarter, nickel, penny, dime and a concert set list that Prine wrote with a Sharpie.

“John’s stuff I thought was very, very human, just everyday stuff,” said Hoekstra, who got to know Prine while working as a reporter.

There’s also a Cubs warm-up jacket that belonged to Chicago-born folk singer Steve Goodman. Right before his death in 1984 he wrote “Go Cubs Go,” which has been adopted as the Cubs victory song.

On display from Fogelberg are a Martin acoustic guitar, which he named “Buck,” and a copy of a 1981 handwritten letter from Fogelberg’s father, a band leader at a high school in Pekin, thanking Dan for writing a tribute to him, the hit song “Leader of the Band.”

Also represented is a display on Sones de Mexico, a folk music ensemble from Chicago’s Pilsen neighborhood, that includes a donkey’s jawbone, a percussion instrument known as a quijada that creates a strong, rattle-like buzzing sound.

A reel-to-reel tape recorder and a turntable once used by the late DJ Frankie Knuckles, known as the Godfather of House Music, the electronic dance genre popularized in Chicago, can be seen, as can Belleville native and Chicago resident Jeff Tweedy’s Fender Telecaster.

As Tawzer sees it, a big goal of the exhibit was to show how much the museum emphasizes different aspects of Illinois history, in addition to Lincoln’s legacy.

“Standing in the presence of Miles Davis’ trumpet, knowing that he had such a huge impact on world of music and that he was born in Alton, Illinois, should make some connection, whether you’re from Alton or not,” said Tawzer. “Either you’re a resident or visitor to Illinois, the hope is that your appreciation meter goes way up as you walk out the door.”

“The State of Sound” runs through Jan. 23. The exhibit is free with the museum’s regular price of admission.

Watch Now: What will it take to keep schools open?

Watch Now: What will it take to keep schools open?

DES MOINES — Gov. Kim Reynolds’ campaign arm announced it raised nearly $3.8 million in 2021 and finished the year with nearly $4.8 million in its account. The campaign said both would be state records: the former being the most raised in a year preceding an election, and the latter the most ever for a statewide campaign.

An Illinois judge who made sexist comments about an attorney during a conversation in his courtroom that he did not realize was being broadcast live on YouTube has been removed from the bench, officials announced Wednesday.

Unused medication can be donated under new Illinois law

A new law allows donation of unused medication in Illinois. But it could take some time to get started.

Complaints about long-term care in Illinois are usually dismissed. One woman’s case sheds light on how system works.

Illinois to begin next phase of I-80 construction

Gov. J.B. Pritzker on Thursday announced the beginning of the next phase of construction along the Interstate 80 corridor that will modernize Houbolt Road in Joliet.

A group of Chicago civil rights attorneys signed a letter to Mayor Lori Lightfoot Wednesday asking her to withdraw an ordinance introduced in September which aims to allow the fining of gang members and gives police the authority to seize their property.

Couple who got $105,000 bill from Chicago Public Schools over residency dispute fights back in court

A family is fighting a $105,000 tuition bill from Chicago Public Schools after the district determined three of the children did not live in the city while attending selective enrollment schools. The CPS inspector general’s office called the case “especially egregious” in its recent annual report.

Illinois judge who disparaged lawyer is off the bench

"Can you imagine waking up next to her every day? Oh, my God!" the judge said, before apparently realizing his remarks were being broadcast live on YouTube.

Authorities have been searching for a suburban Chicago inmate who was allowed to leave jail to attend a family member's funeral but did not return.

Matt Plater has been in charge of school districts for more than two decades. Something is happening he’s never seen before. Jobs that used to draw hundreds of applications now get a dozen. More specialized positions might not get any at all. 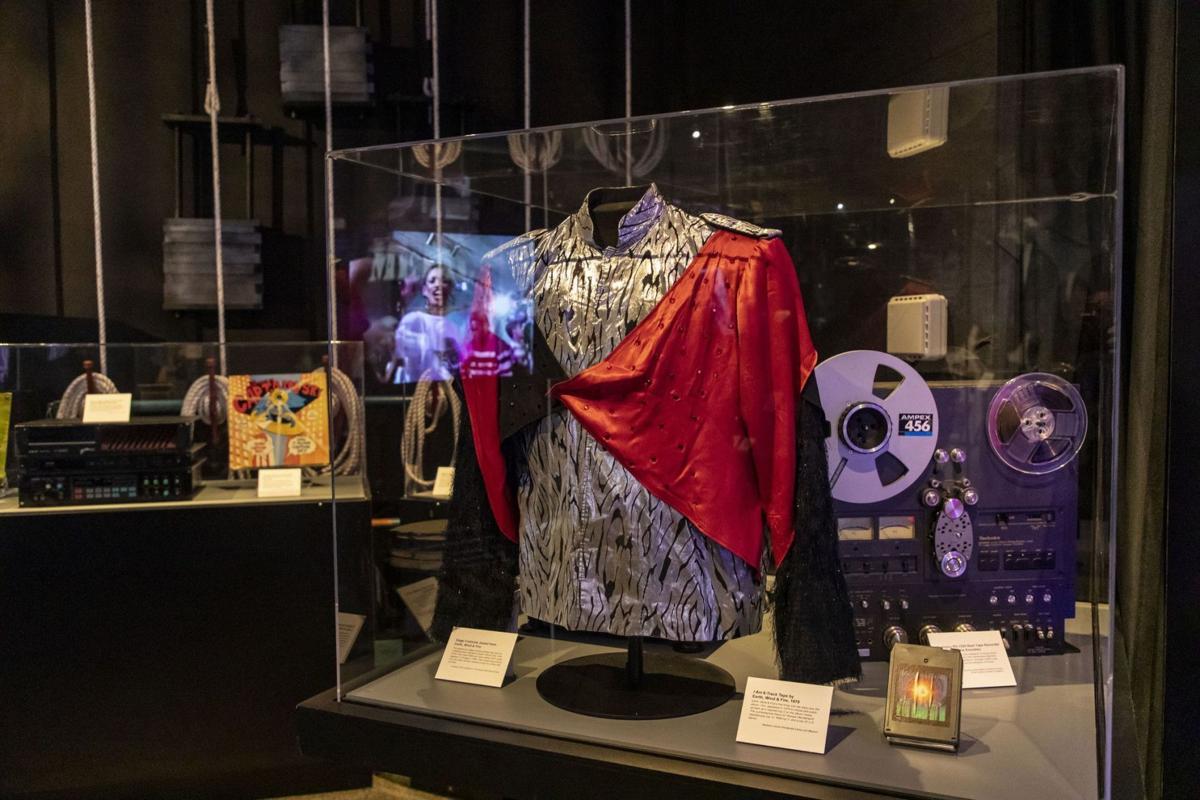 A stage costume jacket from Earth, Wind and Fire and a reel tape recorder used by Frankie Knuckles in The State of Sound exhibit on Nov. 18, 2021 at the Abraham Lincoln Presidential Library and Museum in Springfield.