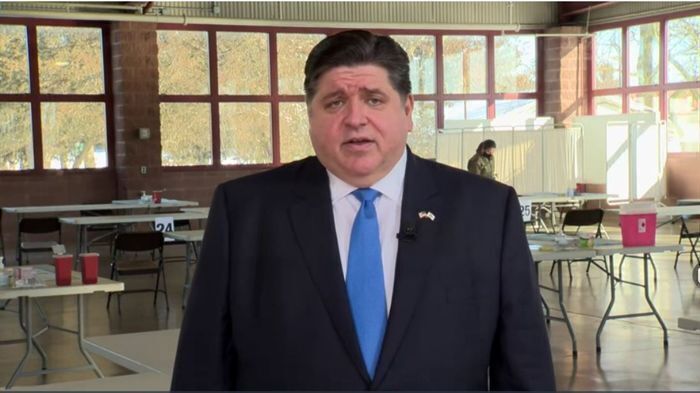 Gov. J.B. Pritzker gives a prerecorded budget address at the Illinois State Fairgrounds. The address was recorded Tuesday and livestreamed across the state Wednesday. 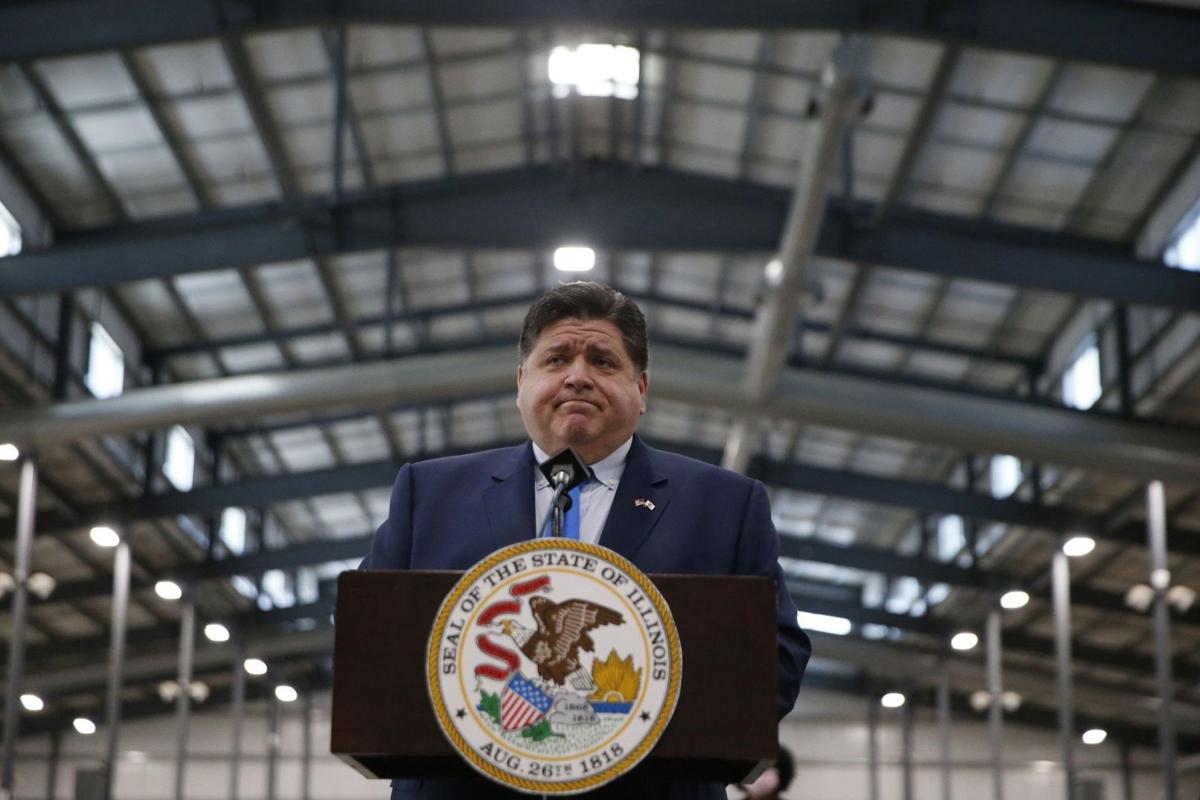 Gov. J.B. Pritzker on Wednesday proposed a $41.58 billion state budget for the next fiscal year that relies on more than $900 million in savings from the elimination of "corporate loopholes," relatively flat spending overall, increases for some programs, no income-tax increase and a second year of skipping a recommended $350 million boost for the school aid formula. Above in a file photo, Gov J.B. Pritzker gives a press briefing earlier this year at the drive-thru COVID-19 vaccination location.

SPRINGFIELD – Gov. J.B. Pritzker outlined a $41.6 billion budget proposal Wednesday that would hold most state agencies at flat funding levels but which relies heavily on changes to the state’s corporate tax structure that lawmakers have not yet approved.

The budget proposal, which is only the governor’s request for lawmakers in the General Assembly, does not call for income tax increases. Over the next four months, lawmakers will work on an operating budget of their own to send to the governor which may or may not address all of his requests.

It also does not rely on any federal funding increases that have not yet been passed into law, although a federal Medicaid reimbursement rate increase that is already in place does account for a $638 million reduction to the state’s expenditures.

It was Pritzker’s third budget message since taking office in 2019. And unlike others that were delivered from the House chamber in the Capitol, this year’s message was delivered remotely through a prerecorded video due to the ongoing COVID-19 pandemic. The address was recorded at the Illinois State Fairgrounds, which now serves as a COVID-19 vaccination site.

In his speech, Pritzker had harsh rhetoric for “far right” Republicans at all levels of government, describing them as “carnival barkers,” for lobbying against federal relief to states and for defying health guidelines. He also once again made note of the two-year budget impasse presided over by Republican former Gov. Bruce Rauner, calling it a “self-inflicted” period of suffering which saw the state’s backlog of unpaid bills balloon to over $16 billion.

He said in the past 20 years, as pension payments have become an increasing burden on state finances, Illinois’ number of government employees has shrunk by 30%, the Illinois State Police force has shrunk by 40% and the Illinois Environmental Protection Agency workforce shrunk by 60%.

“If there is anything the last year should have taught us, it is that we need a reliably well-funded government,” he said. “Many on the far right have made their name in politics by touting cuts to unemployment programs and health insurance coverage. They called anyone who sought unemployment benefits ‘takers.’ They demonize state employees. And they fought unrelentingly to eliminate any state or federal funds designed to make health care more accessible, equitable and fair.”

The budget proposed for fiscal year 2022 relies on more than $900 million in corporate tax changes that will require action from the General Assembly. Those include a reversal of previous General Assembly action to repeal the corporate franchise tax, a cap on net operating losses for the fiscal year that would allow for $314 million in savings, a cap on a retailer’s discount to $1,000 per month, and other changes.

But Republicans and business groups lambasted the governor’s plan as a tax increase on businesses and a betrayal of a bipartisan compromise budget which members of both parties celebrated in Pritzker’s first year.

Republican House Minority Leader Jim Durkin, of Western Springs, accused the governor of seeking “payback” in his effort to repeal some corporate tax incentives passed by lawmakers in 2019, alleging that it was in response to the November failure of the graduated income tax.

While the governor characterized his corporate tax changes of closing “corporate loopholes,” Republicans characterized it as an elimination of important incentives aimed at keeping job creators in the state.

“We understand that the state has fiscal problems to address, however, the governor’s plan will have a long-term negative impact on job creation and tax revenues for the state as it produces an unfair increase on taxpayers after they resoundingly defeated the graduated income tax,” Maisch said in an email statement. “This not only will expand what will get taxed, but will also reduce key tax credits for vital sectors of the economy.”

Much of Pritzker’s speech was dedicated to demonstrating the toll of the pandemic both on society and state finances.

“I had bolder plans for our state budget than what I am going to present to you today. It would be a lie to suggest otherwise,” Pritzker said. “But as all our families have had to make hard choices over the last year, so too does state government.”

Senior budget officials, in a briefing before the address was streamed, noted the governor will still seek to decouple the state tax code from changes allowed in the federal Coronavirus Aid Relief and Economic Security, or CARES, Act. That change would keep revenues flat from a year ago by providing that the CARES Act cuts passed last year would not automatically reduce Illinois state tax burdens for businesses.

The measure failed in the lame duck session as Republicans blasted it as a more than $500 million tax increase on businesses, but Democrats at the time said it was a way to prevent revenue loss by maintaining the status quo.

K-12 education funding from the state will remain flat from a year ago, the second straight year the state would forgo that added $350 million called for in state law each year as part of an evidence-based funding formula.

The budget proposal also eliminates a 48-month deadline for repaying interfund borrowing, which alleviates $276 million of pressure in the current fiscal year by allowing the state to repay fund borrowing on an extended deadline.

The budget calls for a full pension payment and increases funding for the Department of Children and Family Services by 7.9%. Pritzker also asked lawmakers to pass a standalone bill increasing spending for the Illinois Department of Employment Security by $60 million in federal funds for the current fiscal year and called for an added $73 million for the current fiscal year in federal funds.

Higher education would see funding levels maintained and Monetary Award Program grants for college students would increase by $28 million, per the governor’s request.

Pritzker’s budget proposal also calls for an 8% reduction, or $638 million, in Medicaid expenses. That’s because the federal government has increased its share of Medicaid funding by 6.2 percentage points through the end of 2021 as part of its pandemic response plan.

Local governments also would see a cut in financial assistance they get from the state. The Local Government Distributive Fund, or LGDF, which gives local governments a share of the income tax revenue the state collects, would only be funded at 90%, but officials in the governor’s office said they expect that cut to be offset by gains they municipalities would realize through the closing of corporate tax loopholes.

Detroit fights to slow pace of coronavirus in city

Check out this incredible Russian art exhibition under frozen water

Check out this incredible Russian art exhibition under frozen water

Local lawmakers are reacting to Gov. JB Pritzker's annual budget address, one that focused on spending cuts and economic recovery in a state whose economy has been hurt by COVID-19.

Gov. J.B. Pritzker gives a prerecorded budget address at the Illinois State Fairgrounds. The address was recorded Tuesday and livestreamed across the state Wednesday.

Gov. J.B. Pritzker on Wednesday proposed a $41.58 billion state budget for the next fiscal year that relies on more than $900 million in savings from the elimination of "corporate loopholes," relatively flat spending overall, increases for some programs, no income-tax increase and a second year of skipping a recommended $350 million boost for the school aid formula. Above in a file photo, Gov J.B. Pritzker gives a press briefing earlier this year at the drive-thru COVID-19 vaccination location.