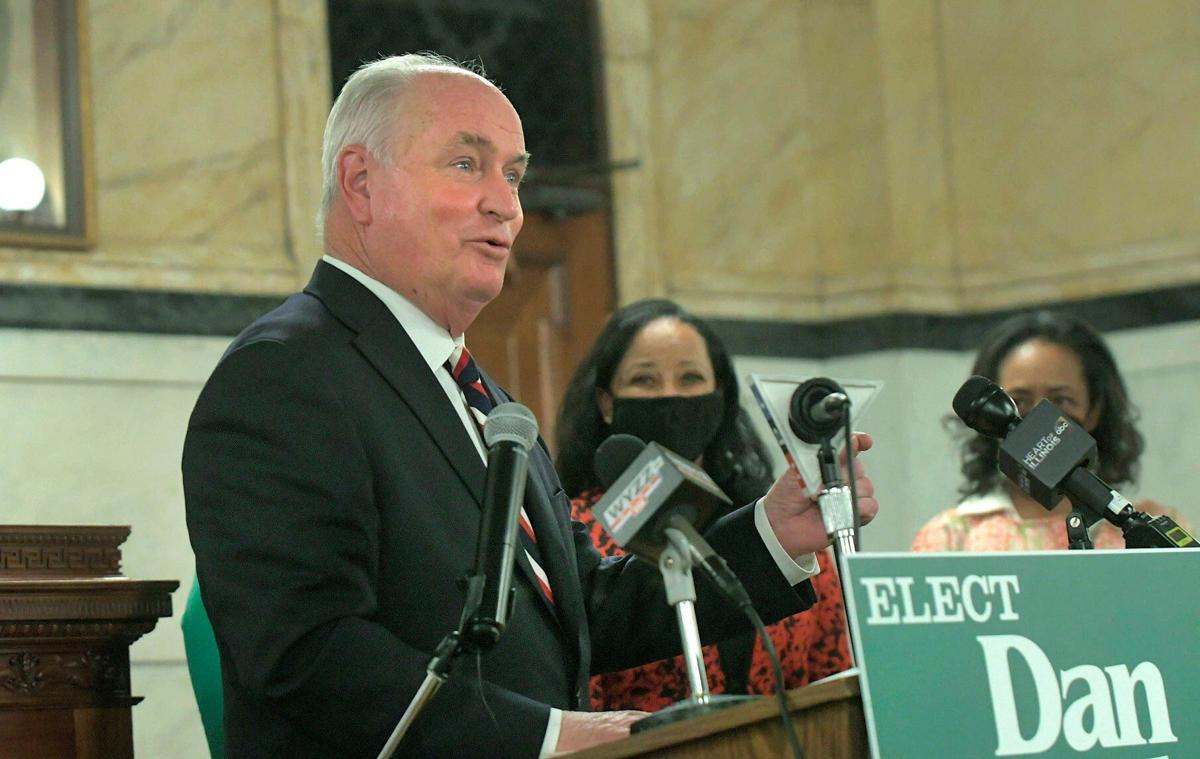 State Rep. Dan Brady, R-Bloomington, announces that he's running for Illinois Secretary of State during a press conference Wednesday at the McLean County Museum of History. 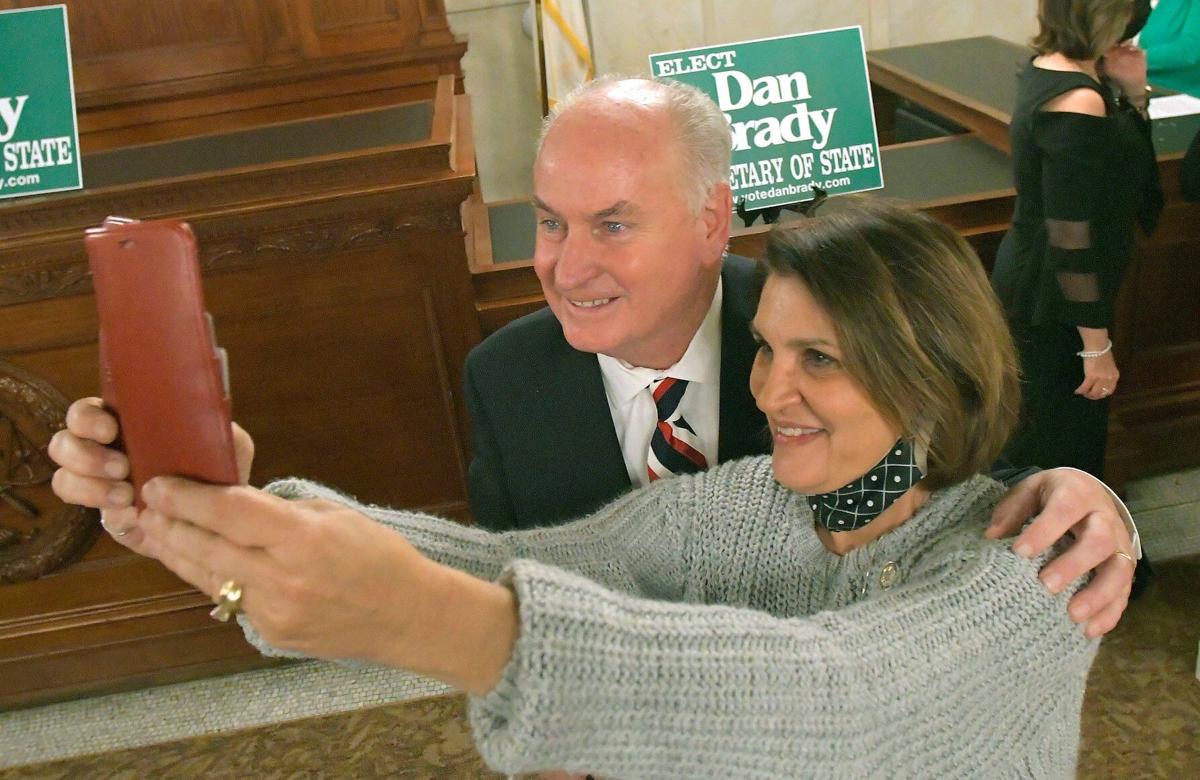 State Rep. Dan Brady and state Sen. Sally Turner take a photograph together after Brady announced that he would run for Illinois Secretary of State during a press conference at the McLean County Museum of History, Wednesday. 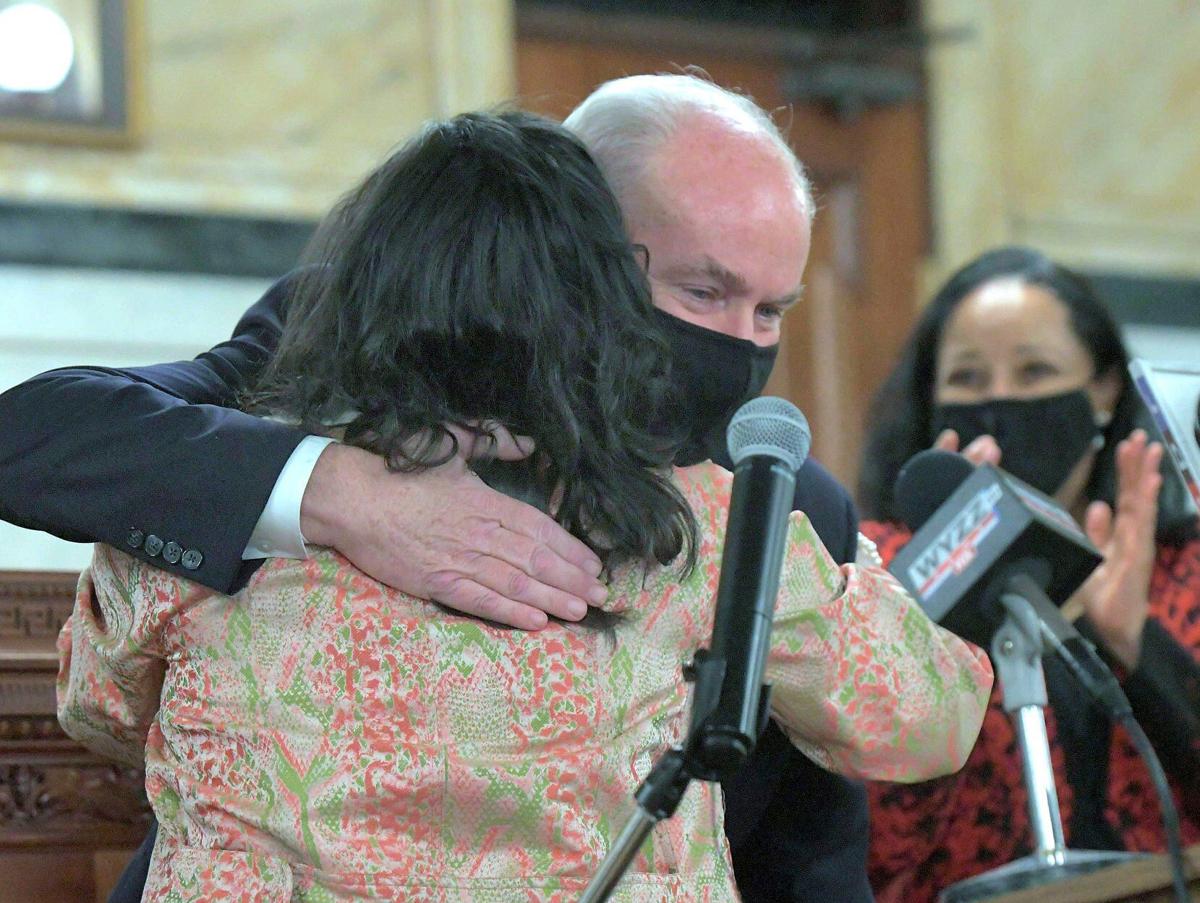 State Rep. Dan Brady gets a hug from campaign volunteer Millicent Roth at the McLean County Museum of History on Wednesday. Brady is running for Secretary of State.

SPRINGFIELD — State Rep. Dan Brady, R-Bloomington, declared his candidacy for Illinois Secretary of State Wednesday, forgoing an all-but-certain reelection to the Illinois House to embark on a run for a statewide office that’s been in Democratic hands for more than two decades.

The Bloomington Republican is the first member of his party to enter the race to succeed retiring incumbent Jesse White, a Democrat who has held the office since 1999.

Brady, in a short speech announcing his candidacy in Chicago, said he would focus on improving an office he says “has become inefficient with long lines, outdated technology and inefficient processes.”

“As Secretary of State, my main focus will be improving the delivery of these services, starting with partnering with the brightest innovators and technology experts that the state has to offer,” Brady said.

Brady was introduced by House Republican Leader Jim Durkin, who said the candidate’s focus on constituent services makes him a natural fit for the customer service-oriented office.

“Secretary of State, of all the constitutional offices, is one that is truly, truly constituent-driven,” Durkin said. “There's no better person fit for this job than Dan Brady. Dan's dedication in his public service is strictly for his constituents in his district. It's a perfect fit for this great, noble statesman to take on this position.”

Brady has been a member of the Illinois House since 2001, making him the third-most senior member of the 118-person body. He currently serves as a deputy minority leader under Durkin.

Though Republicans did not fare well under the state legislative redistricting maps passed by the Democratic-controlled legislature and signed into law by Gov. J.B. Pritzker, Brady was drawn into a safe Republican district, essentially ensuring his reelection if he wished to stay in the House.

Instead, Brady will take a shot at statewide office, a heavy lift for a Republican in a state with a heavy Democratic tilt. All six statewide constitutional offices are currently held by Democrats. The last two Republicans to win statewide were Gov. Bruce Rauner and Comptroller Judy Baar Topinka in 2014.

And if he wins the GOP primary, he will likely face a well-funded Democratic opponent.

Beyond constituent services, the office is viewed as a stepping stone position for candidates seeking higher office. More recently, two former secretaries of state, Republicans Jim Edgar and George Ryan, went on to become governor. Another, Democrat Alan Dixon, went on to serve two terms in the U.S. Senate.

While acknowledging that he will need to raise more money to be competitive, Brady said that “it has been proven that money isn't everything when it comes to winning political races,” pointing to recent strong GOP performances in blue-leaning states like New Jersey and Virginia.

“If they want business as usual, if they want dominancy from this particular area, then that's their choice,” Brady said, referring to the Chicago region. “But I'm going to be offering something new, something fresh, something different. And I hope they'll take me up on my candidacy.”

Brady, a fiscal conservative, is in the mold of the more traditional Republicans that dominated the state party under former Govs. Jim Thompson, Edgar and Ryan, giving hope that he could compete for votes in the moderate Chicago suburbs, which shifted significantly towards Democrats during the Trump era.

Brady is a funeral home director at Kibler-Brady-Ruestman Memorial Home. Before his election to the House, he served as McLean County coroner from 1992 to 2000.

Photos: A grateful state and state representative presents this flag

When Winnebago County Sheriff's Deputy Joshua Douglas responded to a call at 164 Van Buren St. in Thompson on Sept. 11, he was expecting to interview a man who said he'd been a victim of an assault.

"For the governor to call the verdict into question is reckless and invites more unrest on our city streets and undermines confidence in our judicial system," the statement said.

The social media manager for the Democratic Party of DuPage County lost her post after tweets comparing Kyle Rittenhouse to the driver of the SUV that sped through a Wisconsin Christmas parade.

Iowa’s agriculture economy has not been immune to issues created by shipping backups at U.S. ports, state and national ag experts say.

DES MOINES — The federal government’s plan for distributing the first doses of the COVID-19 vaccines roughly a year ago mostly hit the mark and likely helped to limit the number of COVID-19-related deaths, according to a recent analysis and report from researchers at Iowa State University.

Behind a window with a “Save the Byron Nuclear Plant” sign taped to the glass, Ricardo Montoya Picazo listened to a father of three wonder aloud if he would still be able to support his children in a few weeks.

JOHNSTON — Chuck Grassley has run seven U.S. Senate campaigns and won each, by a staggering average margin of 35 percentage points.

DES MOINES — Sometime next year, Iowans will have the option of keeping their state-issued driver’s license on their smartphones and not just their wallets.

Worker shortages are everywhere. Iowa schools are no exception.

DES MOINES — Worker shortages are impacting nearly every workforce sector, and schools have not been immune, education officials say. 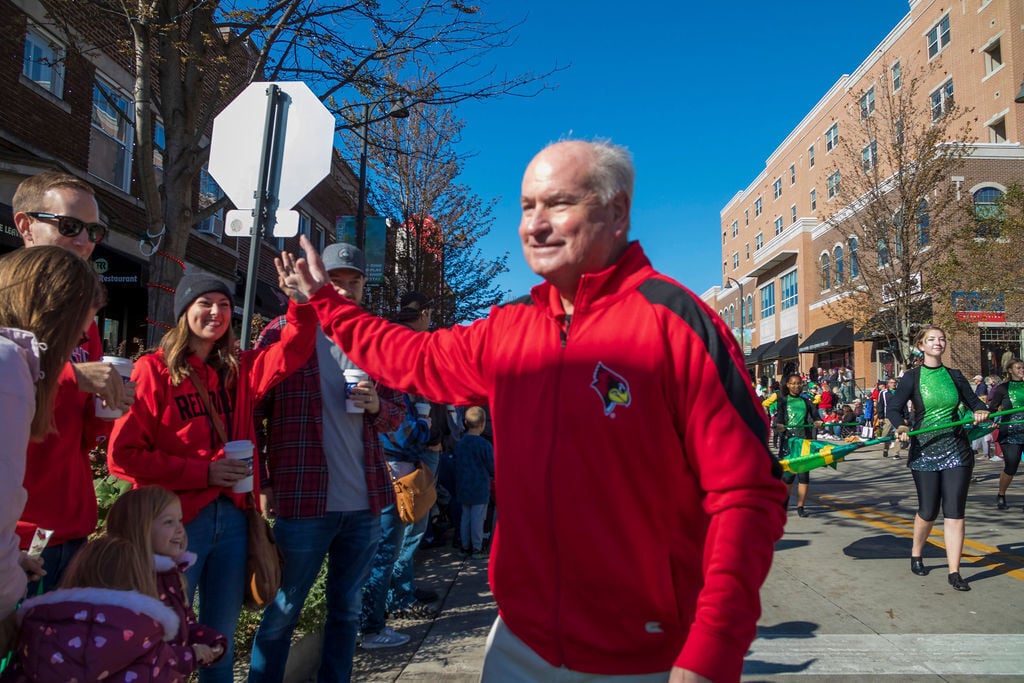 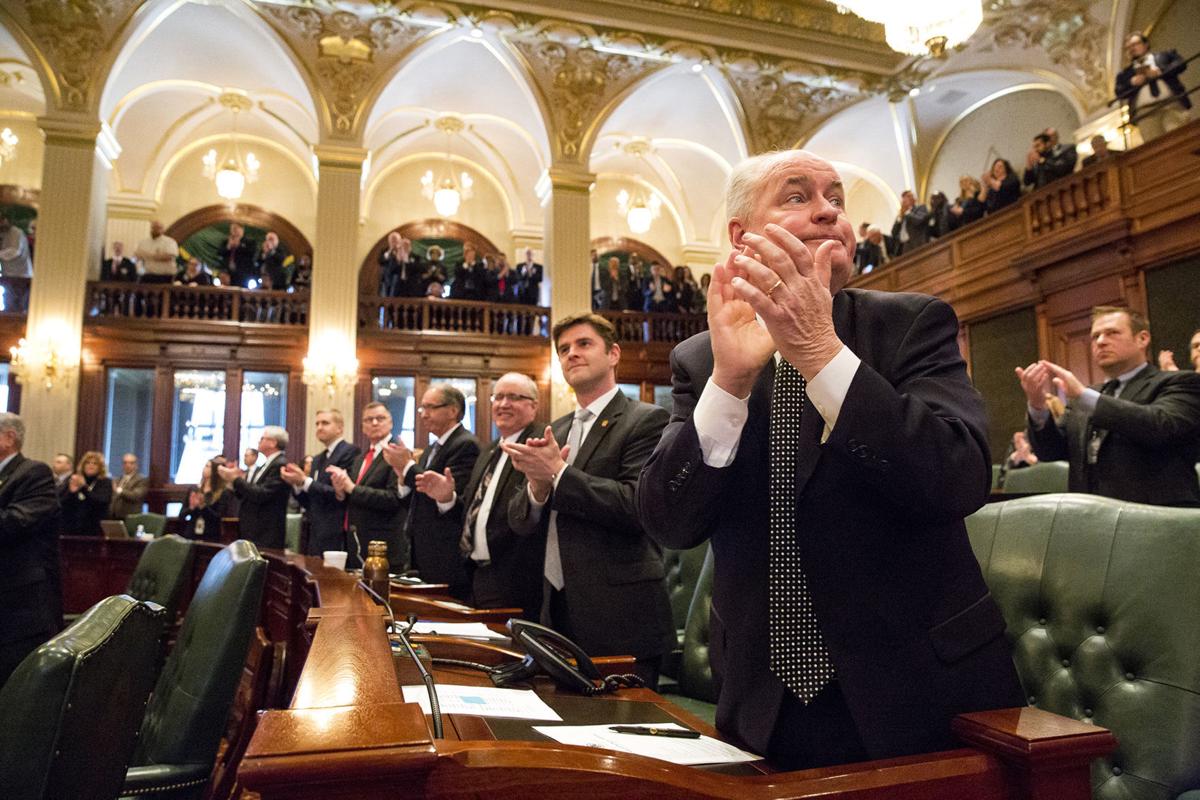 State Rep. Dan Brady, R-Bloomington, announces that he's running for Illinois Secretary of State during a press conference Wednesday at the McLean County Museum of History.

State Rep. Dan Brady and state Sen. Sally Turner take a photograph together after Brady announced that he would run for Illinois Secretary of State during a press conference at the McLean County Museum of History, Wednesday.

State Rep. Dan Brady gets a hug from campaign volunteer Millicent Roth at the McLean County Museum of History on Wednesday. Brady is running for Secretary of State.