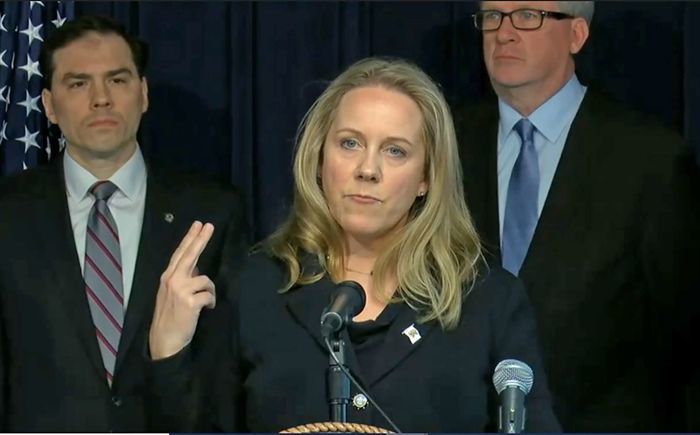 Rep. Deanne Mazzochi, R-Elmhurst, criticizes the Democratic leaders of a property tax relief task force during a news conference Wednesday in Chicago. She said 26 Republican recommendations were ignored by the chairman of the task force.

“Following the release of their draft within the last week, we once again see [House Democrats] refuse to be serious … at a time when our citizens are so desperate and wanting for change in state government,” House GOP Leader Jim Durkin, of Western Springs, said during a news conference in Chicago.

The draft report has been circulating among the 88 members of the task force — or about half of the General Assembly — as the group prepares to issue a final report to Democratic Gov. J.B. Pritzker and the legislature ahead of the start of the 2020 legislative session Jan. 28.

It calls for, among other things, having the state take over a greater share of funding responsibility for public schools, consolidating potentially hundreds of elementary school and high school districts into full K-12 “unit” districts, and extending the state sales tax to various services that aren’t currently taxed to raise state revenue that could be used to lower local property taxes.

Among the Republican proposals not discussed in the draft report, according to Rep. Deanne Mazzochi, of Elmhurst, was cutting pension benefits for new employees of local governments and school districts and capping pensions for school administrators.

“We propose capping administrator pensions so that they can’t exceed the average household income in the state of Illinois, because administrative pensions are going absolutely crazy and driving costs up,” she said. “None of these were up for debate or up for consideration.”

In a separate interview, Rep. Sam Yingling, a Grayslake Democrat who served as one of the co-chairs of the task force, said Illinois did reduce pension benefits for new employees in 2010 when it adopted the so-called “Tier 2” pension plan. But he added federal law requires that in workplaces that offer pension benefits in lieu of Social Security, the benefits must be at least as generous as what Social Security provides.

He also noted the state now offers the option of opting out of the pension plan in favor of a 401(k)-style savings plan and that it is also offering buyouts of future benefits.

In response to the charge that House Republican ideas weren’t considered, Yingling said the draft report was sent to all four legislative caucuses — Republicans and Democrats in the House and Senate — for their suggested edits, but that the House Republicans so far have not responded.

Property tax reform is expected to be a significant topic in the upcoming legislative session and Gov. Pritzker has made it a high priority for his administration.

“The governor appreciates the work of the property (tax) relief taskforce and looks forward to continuing productive conversations around property tax relief this session,” a spokeswoman said in an email.

The statement went on to note that this year’s state budget includes a substantial increase in public school funding and that he recently signed a bill to consolidate hundreds of local police and firefighter pension plans, both of which are expected to result in property tax relief.

Comptroller to lawmakers: No more pay for time not worked

How to investigate email reference to 'rape in Champaign'? Madigan says no to House investigation; Pritzker refers case to executive inspector general; Brady asks State Police to get involved

SPRINGFIELD — The Illinois Medicaid program now covers medical procedures for people transitioning from one gender to another.

SPRINGFIELD — Some Illinois lawmakers say a new U.S. Food and Drug Administration policy responding to a growing trend of youth e-cigarette us…

Rep. Deanne Mazzochi, R-Elmhurst, criticizes the Democratic leaders of a property tax relief task force during a news conference Wednesday in Chicago. She said 26 Republican recommendations were ignored by the chairman of the task force.