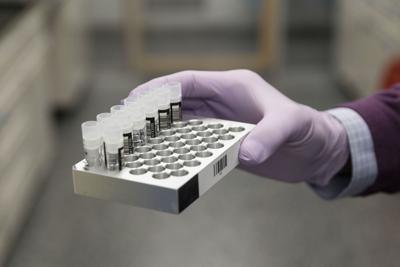 Students at Lutheran School Association sold T-shirts and collected change to raise $6,000 to help victims of Hurricane Ida in Louisiana.

With soaring demand for the state’s COVID-19 SHIELD testing program overwhelming the system this fall, the Illinois Department of Public Health has enlisted the federal government to ensure the virus mitigation strategy is available to public and private schools statewide, IDPH officials said Friday.

The partnership between IDPH and the U.S. Health and Human Services’ Midwest COVID-19 Testing Coordination Center will, “help increase capacity and facilitate faster access to COVID-19 testing in schools across the state,” officials said.

The new program, which covers 16 states and is managed by Battelle, a Columbus, Ohio-based nonprofit research and development company, will, “expedite the testing onboarding process, and tap into additional federal funding under the HHS’ Operation Expanded Testing program,” officials said.

All public and private schools outside of Chicago became eligible for free testing earlier this year, and SHIELD Illinois — which was created by researchers at the University of Illinois at Urbana-Champaign — has testing agreements with more than 300 public school districts and more than 100 private schools, IDPH officials said.

While those public districts represent more than 1,700 schools and more than 1 million students and staff outside of Chicago, more than 70% of SHIELD districts signed up after Aug. 1, “resulting in a surge in demand that has lengthened the time it takes schools to complete their onboarding steps,” officials said.

Dr. Ngozi Ezike, director of IDPH, said in a Friday statement that she is, “delighted to see this level of interest for establishing testing as a layer of protection in our schools as we fight COVID-19 on all fronts.”

SHIELD Illinois has taken other steps in recent weeks, including creating a dashboard so schools can better monitor their status, adding regional drop-off locations to reduce transportation time to labs, and hiring additional staff to assist schools with onboarding and testing, officials said.

“SHIELD Illinois contracted with the state and built a system for 300,000 in-school tests per week, but current demand far exceeds that,” Ron Watkins, managing director of SHIELD Illinois, said in a Friday statement. “We are excited to partner with the federally funded MCC to add capacity and speed access to testing for students across Illinois.”

Meanwhile, officials at Hampshire High School announced Friday that they were notified by the Kane County Health Department that the high school will need to close for a two-week adaptive pause from Oct. 12 to Oct. 22.

“This means all Hampshire High School students will not be allowed on campus for in-person instruction and will transition to remote learning,” officials wrote in a Friday parent letter.

The health department, “is implementing the adaptive pause as a mitigation strategy to reduce the transmission of COVID-19,” officials said.

Since Sept. 28, the high school, which enrolls around 1,700 students, has had 37 positive COVID-19 student cases, officials said.

Statewide, in recent weeks the number of reported school outbreaks has remained steady, while the number of children ages 5 to 17 testing positive for the virus appears to be declining, according to IDPH data.

Students at Lutheran School Association sold T-shirts and collected change to raise $6,000 to help victims of Hurricane Ida in Louisiana.