Emerging from United States Air Force planes, four-legged robot dogs scampered onto an airfield in the Mojave Desert, offering a possible preview into the future of warfare.

But the exercise conducted last week, one of the U.S. military's largest ever high-tech experiments, wasn't a movie set.

Flying into a possibly hostile airstrip aboard an Air Force C-130, the robot dogs were sent outside the aircraft to scout for threats before the humans inside would be exposed to them, according to an Air Force news release dated September 3.

The electronic canines are just one link in what the U.S. military calls the Advanced Battle Management System (ABMS). It uses artificial intelligence and rapid data analytics to detect and counter threats to US military assets in space and possible attacks on the US homeland with missiles or other means.

Will Roper, assistant secretary of the Air Force for acquisition, technology and logistics, said on a future battlefield, soldierswill face "a dizzying array of information" to assess and will need to rely on data synthesis done in nanoseconds to fight effectively.

"Valuing data as an essential warfighting resource, one no less vital than jet fuel or satellites, is the key to next-gen warfare," Roper said in an Air Force news release on the ABMS exercise.

The latest ABMS exercise, from Aug. 31 to Sept. 3, involved every branch of the U.S. military, including the Coast Guard, plus dozens of teams from industry, and used 30 locations around the country.

Nellis Air Force Base in Nevada was one of those, and that's where the robot dogs came into the mix.

"The dogs give us visuals of the area, all while keeping our defenders closer to the aircraft," said Master Sgt. Lee Boston, a member of the Devil Raiders, the nickname for the Air Force's 621st Contingency Response Group, said in the Air Force release.

The dogs are called Vision 60 UGVs, or "autonomous unmanned ground vehicles" by their manufacturer, Ghost Robotics of Philadelphia.

It touts their ability to operate in any terrain or environment while being adaptable to carrying an array of sensors and radios on, for a dog robot, a fairly simple platform.

"A core design principle for our legged robots is reduced mechanical complexity when compared to any other legged robots, and even traditional wheeled-tracked UGVs," the company's website says.

"By reducing complexity, we inherently increase durability, agility and endurance," it says. "Our Q-UGVs are unstoppable."

And in the U.S. military of the future, they may be a vital component of what an Air Force release calls the "kill chain."

"We are exploring how to use ... ABMS to link sensors to shooters across all battlespaces, at speed and under threat. Maturing these concepts and capabilities is necessary to fight and win in the information age," Gen. John Raymond, chief of space operations, said in an Air Force release. 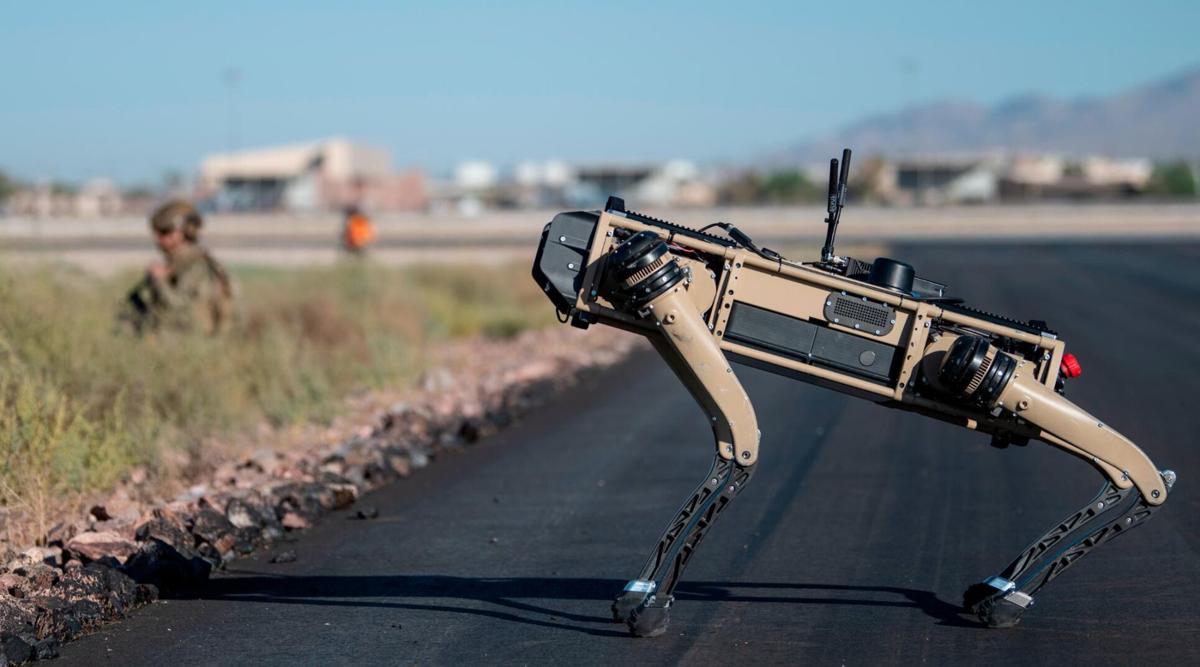 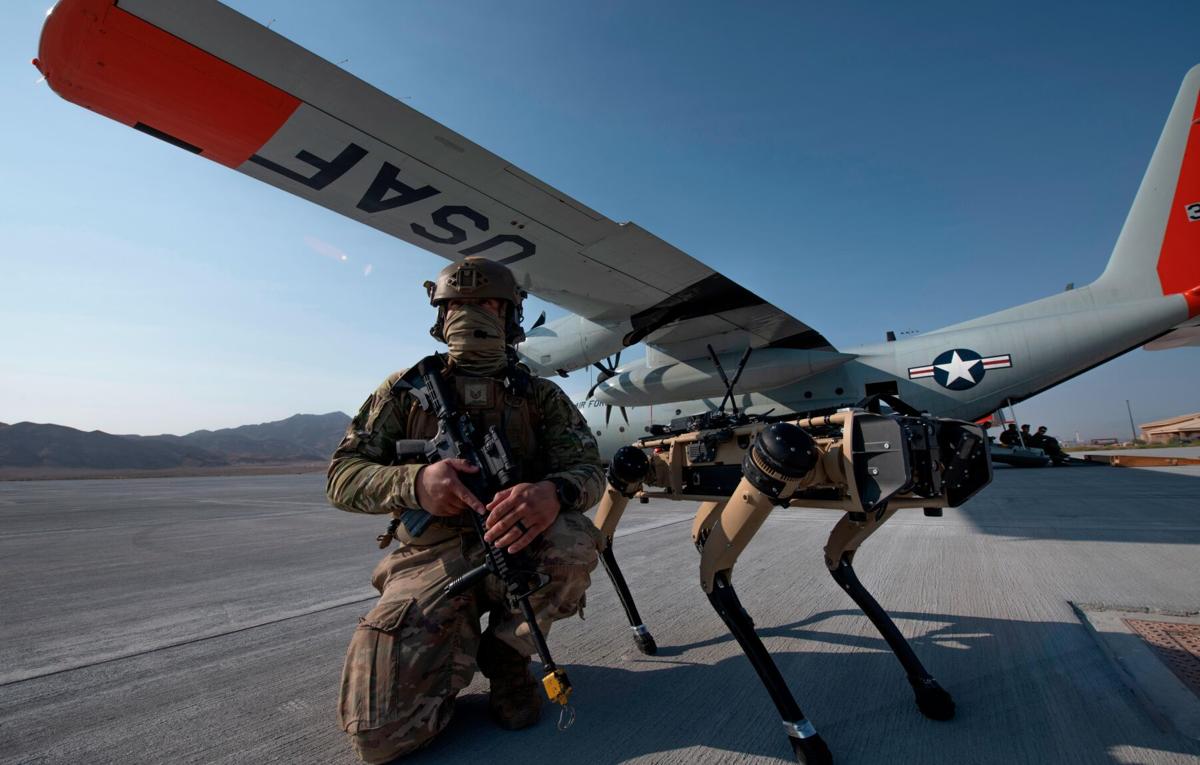 US Air Force Tech. Sgt. John Rodiguez provides security with a Ghost Robotics Vision 60 prototype during an exercises on Nellis Air Force Base in Nevada. 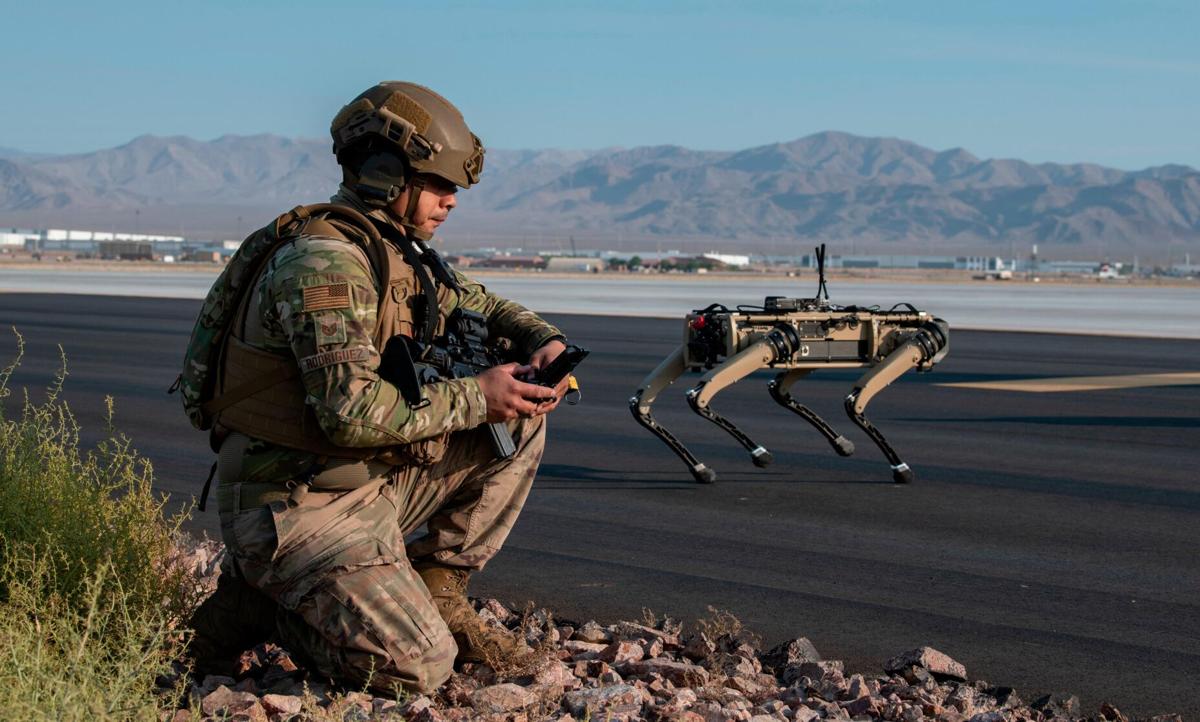 A Ghost Robotics Vision 60 unit operates with a US Air Force sergeant during an exercises at Nellis Air Force Base in Nevada. 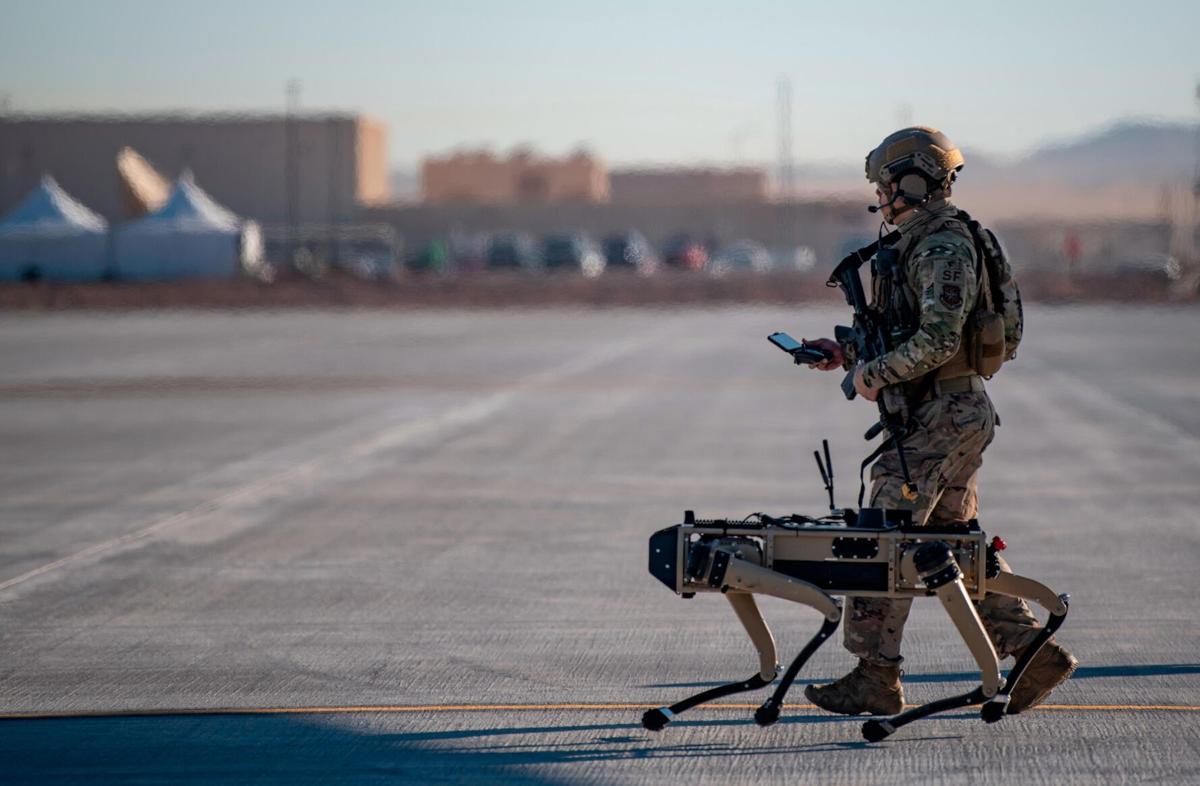