Updated: Henry Dinkins was the only person of interest in the disappearance of Breasia Terrell. Now he's charged with kidnapping and murder. 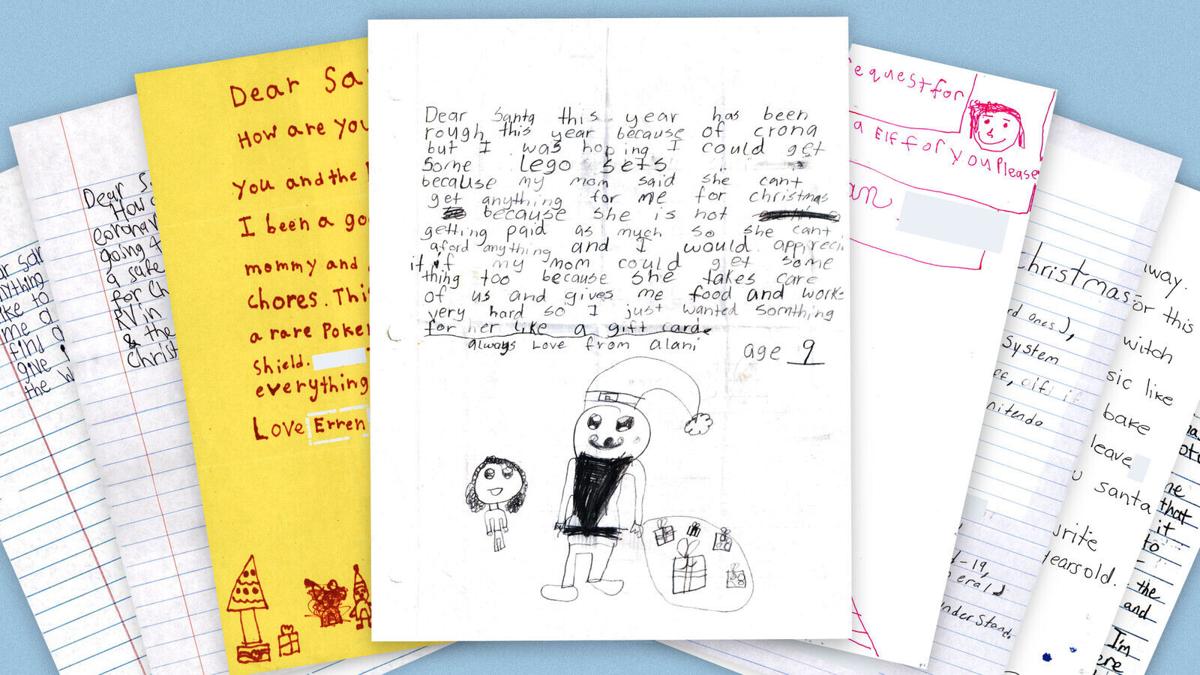 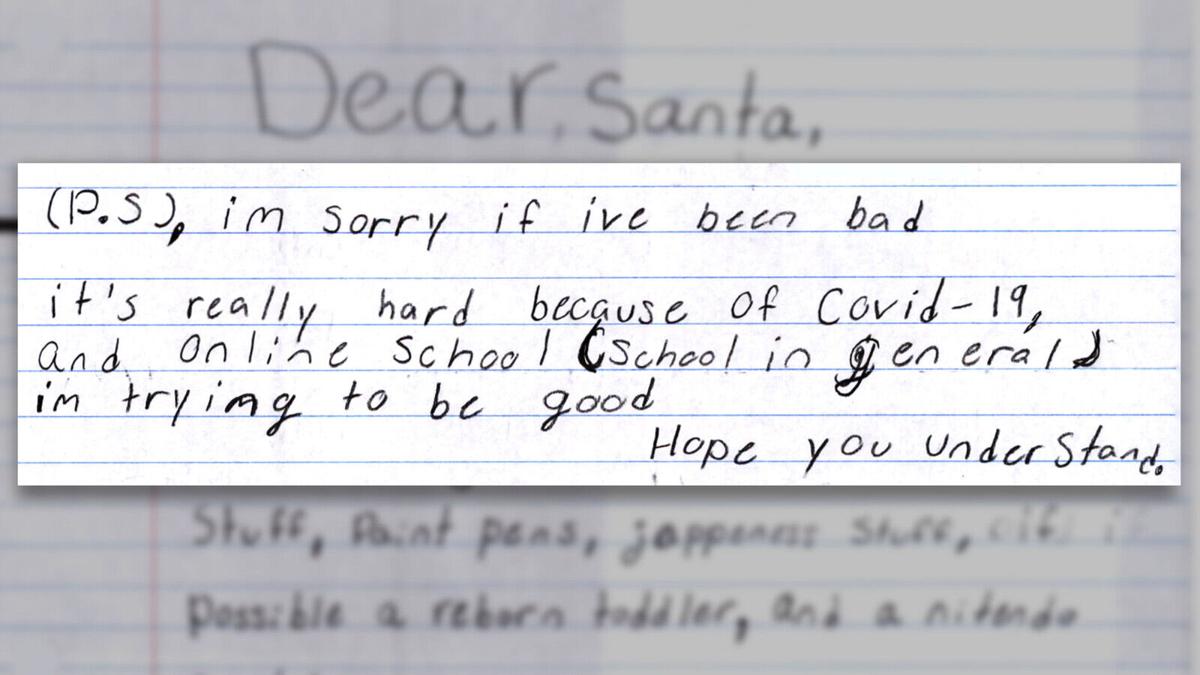 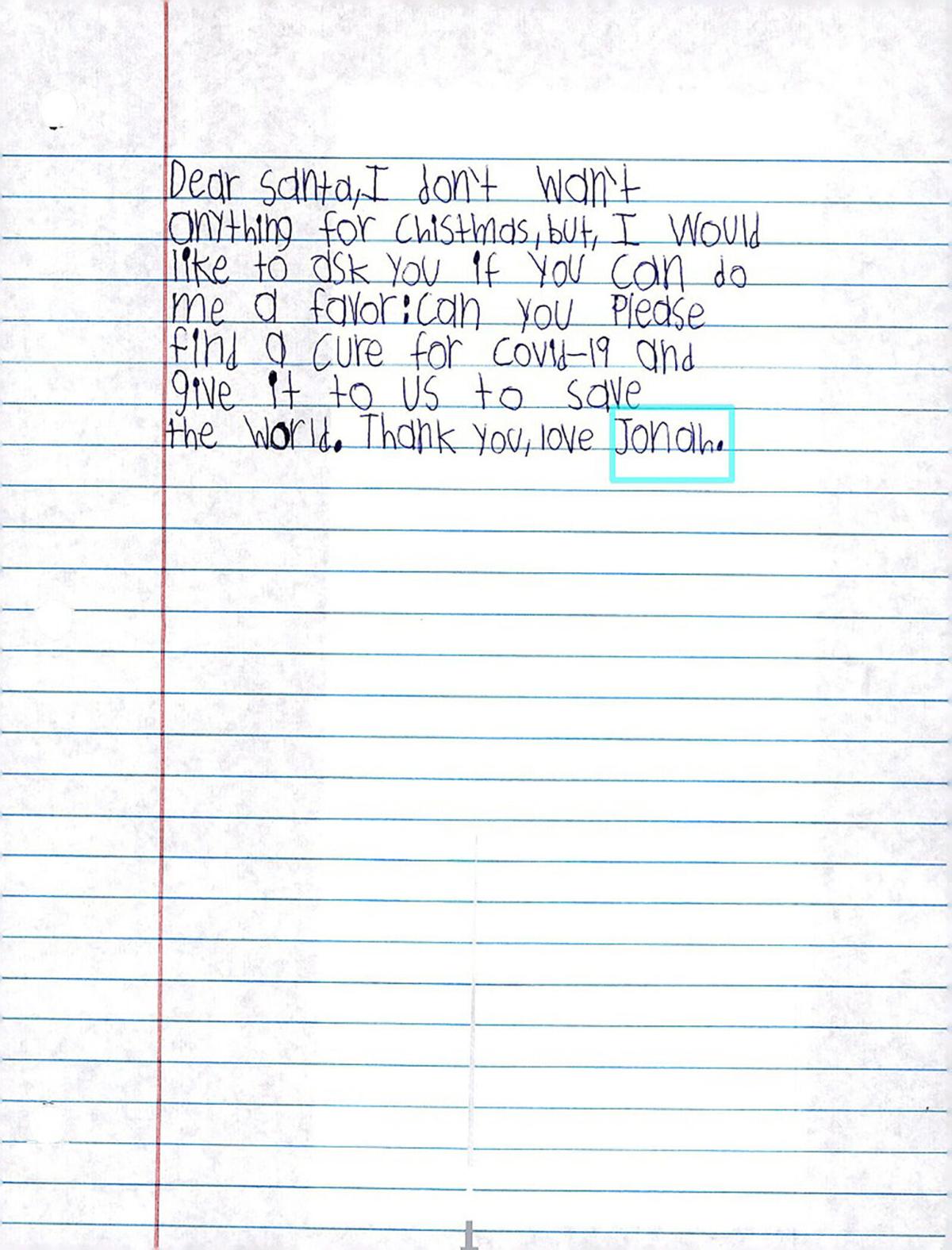 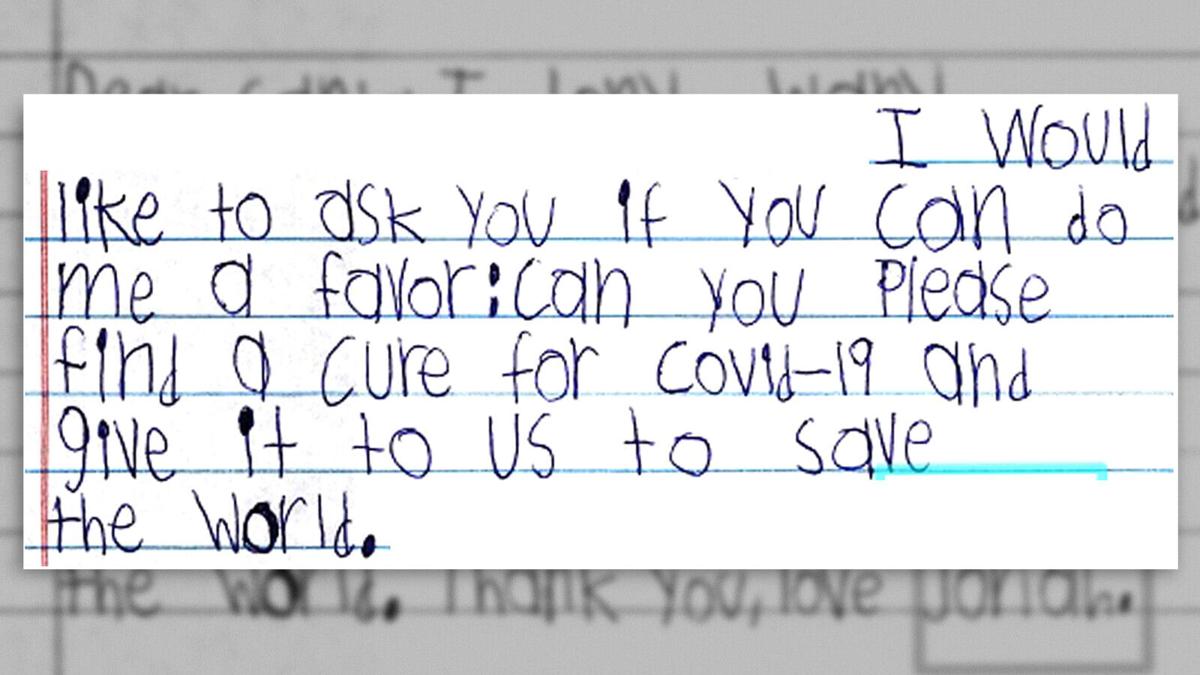 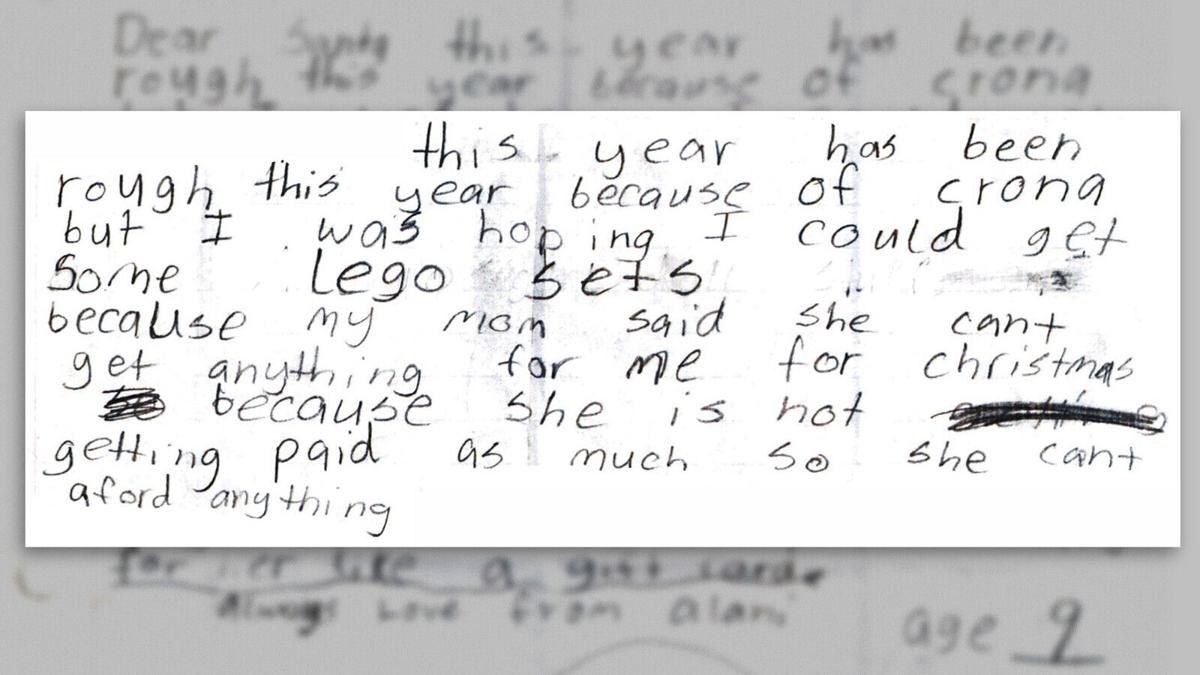 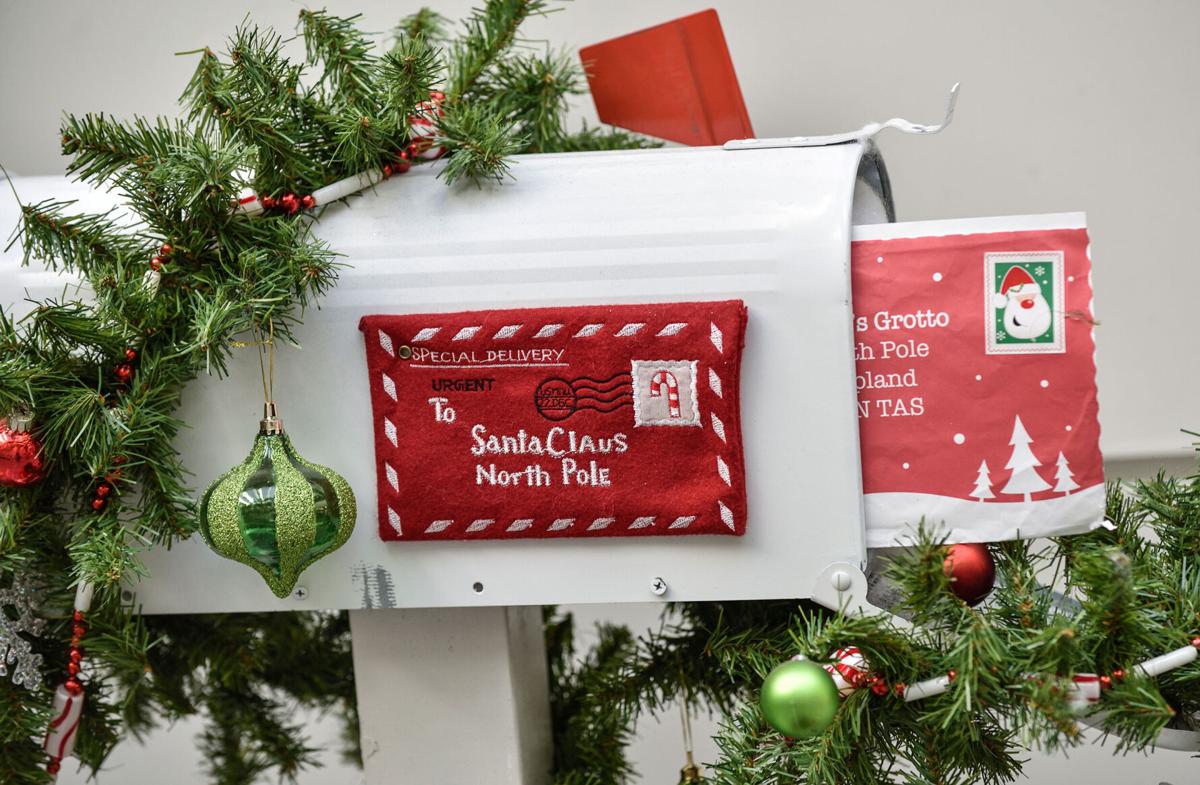 Decorations at the post office during Operation Santa in Los Angeles, California on Dec. 5. Operation Santa is the USPS' program to answer letters written to Santa by needy kids. (Photo by Jeff Gritchen/Digital First Media/Orange County Register via Getty Images)

Jonah wants nothing from Santa this year except for a cure for coronavirus.

Anthony told Santa he wants a magical button he could press to transport him away from the weary reality of the pandemic.

Jasmyne's Christmas list is short and to the point. "This year, I would like end of Covid-19, world peace, climate control, new Xbox," it reads.

In their letters to Santa Claus, kids across the US are still asking for toys, clothes, Legos and video games. But in a year filled with illness and uncertainty, a review of letters addressed to the North Pole and collected through the Post Office's Operation Santa program reveals the pandemic is weighing heavily on children.

Some are imploring Santa to make coronavirus go away. Others are asking for masks for Christmas. Still others write about the challenges of going to school online or how their parents can't afford to buy presents this year because they lost their jobs.

"Dear Santa," Jonah wrote. "I don't want anything for Christmas, but I would like to ask you if you can do me a favor: Can you please find a cure for Covid-19 and give it to us to save the world. Thank you."

The Postal Service began receiving letters to Santa Claus more than a century ago. Operation Santa dates to 1912, when Frank Hitchcock, the postmaster general at the time, allowed postal workers to open and respond to letters addressed to the North Pole.

Post offices worked with volunteers who agreed to "adopt" letters from needy children and send them items on their wish lists.

In 2017, the effort went online in a few major cities. This year, for the first time, the USPS posted all the letters on its Operation Santa site for Samaritans across the country who wish to help kids and their families.

The Postal Service encourages volunteer donors to go online, pick a child's letter to "adopt" and fill out a registration form. The donor then buys the gifts and brings them to their local post office, where a postal worker matches the number on the letter with the child's address and mails them off. For privacy reasons, donors don't have access to recipients' addresses.

Children open up to a figure like Santa because he's seen as a helpful, trustworthy person who spreads joy, says child psychologist Avital Cohen, founder of Peachtree Pediatric Psychology in Atlanta.

"What I read in these letters is that kids really are thinking about the needs of their parent or the world and not just their own desires this year (though of course some kids are asking for the gifts they want this year, which is to be expected!)," Cohen said in an email to CNN.

Since October children and adults in the US this year have sent more than 10,000 notes and cards to Santa -- many of them reflecting the year's hardships, said Kimberly Frum, a spokeswoman for the USPS.

"2020 has seen its share of challenges affecting individuals and families in so many ways. Covid-19 resulted in job losses, temporary unemployment and sadly, the loss of family and friends," Frum said in an email to CNN.

"The program has always been about providing holiday gifts for families who may not have the means to provide for anything more than basic everyday needs. This year, there are likely more families impacted financially and emotionally."

Most of the letters to Santa have already been adopted by donors, Frum said. Postal workers will continue uploading new letters through December 15.

Many kids' letters reflect the reality of life in 2020

In a holiday season unlike any other, with masked Santas behind plexiglass barriers, the annual tradition of writing letters to the North Pole may provide children with a bit of normalcy.

But the sentiments in many of their letters aren't quite like normal.

A Texas girl named Kimberly, 13, is not unlike many kids in asking Santa for AirPods. But she also pleaded for gifts for her three siblings and for her money-strapped parents: a workout machine for her mom and a waterproof jacket for her stepdad.

"This year has tough to all of us due to covid-19. My stepdad is the only (one) working and because of covid-19 he had to stop working full time. Now he is working less because of covid, and all the money he gets is for paying the rent and the bills," she wrote. "My parents think I am writing this for my siblings and I, but I want to surprise them for everything that they have done this year."

Nine-year-old Alani asked for some Legos and a gift card for her mom. She drew a smiling girl with curly hair standing with Santa -- a cheery scene that belied the plaintive tone of her letter.

"Dear Santa this year has been rough ... because of crona ... my mom said she can't get anything for me for christmas because she is not getting paid as much so she cannot aford anything," she wrote.

Savannah, a girl from Massachusetts, included a confession and an apology.

Nhea, a girl in Florida, sounded a little more hopeful in her letter, which asked Santa if the pandemic has reached the North Pole.

"Is there covid where you are? If not I just want to tell you that you are lucky," she wrote. "Dad says that even though he lost his job we will still find a way to celebrate."

Then there is Andy, a 5-year-old in California, who asked Santa for a Nintendo Switch for him and his little brother. He closed his letter by yearning for a return to normal life after the pandemic -- and pretty much spoke for the whole world.

"I wish covid was over so we can hug," he wrote.

Bill and Melinda Gates announced Monday that they are divorcing. The Microsoft co-founder and his wife said they would continue to work together at the Bill & Melinda Gates Foundation.

Boat capsizes off San Diego coast, Apple app goes on trial, and ex-NASCAR driver dies at 42. Plus, severe weather in parts of US. Get caught up.

A gunman killed two people at a Wisconsin casino restaurant and seriously wounded a third before he was killed by police late Saturday, in what authorities said appeared to be a targeted attack.

Why the US may not reach herd immunity from COVID-19; plus more virus updates

Health experts are increasingly doubtful that the United States will reach herd immunity from COVID-19. Here's why.

Restrictions easing in US and Europe amid disaster in India; plus more virus news

Pandemic-weary travelers are returning to the skies in the United States as the vaccine rollout is sending new cases and deaths tumbling in more affluent countries. Here's the latest.

Facebook's quasi-independent Oversight Board voted to uphold his ban from the platform after his account was suspended four months ago for inciting violence that led to the deadly Jan. 6 Capitol riot.

Peloton is recalling its treadmills after one child died and 29 other children suffered from cuts, broken bones and other injuries from being pulled under the rear of the treadmill.

The Biden administration is throwing its support behind efforts to waive patent protections for COVID-19 vaccines in an effort to speed the end of the pandemic.

Almost 8% of the millions who have received the first dose of a COVID-19 vaccine haven't returned to get their second shot. Health experts say what's most surprising is how low that number is.

Decorations at the post office during Operation Santa in Los Angeles, California on Dec. 5. Operation Santa is the USPS' program to answer letters written to Santa by needy kids. (Photo by Jeff Gritchen/Digital First Media/Orange County Register via Getty Images)