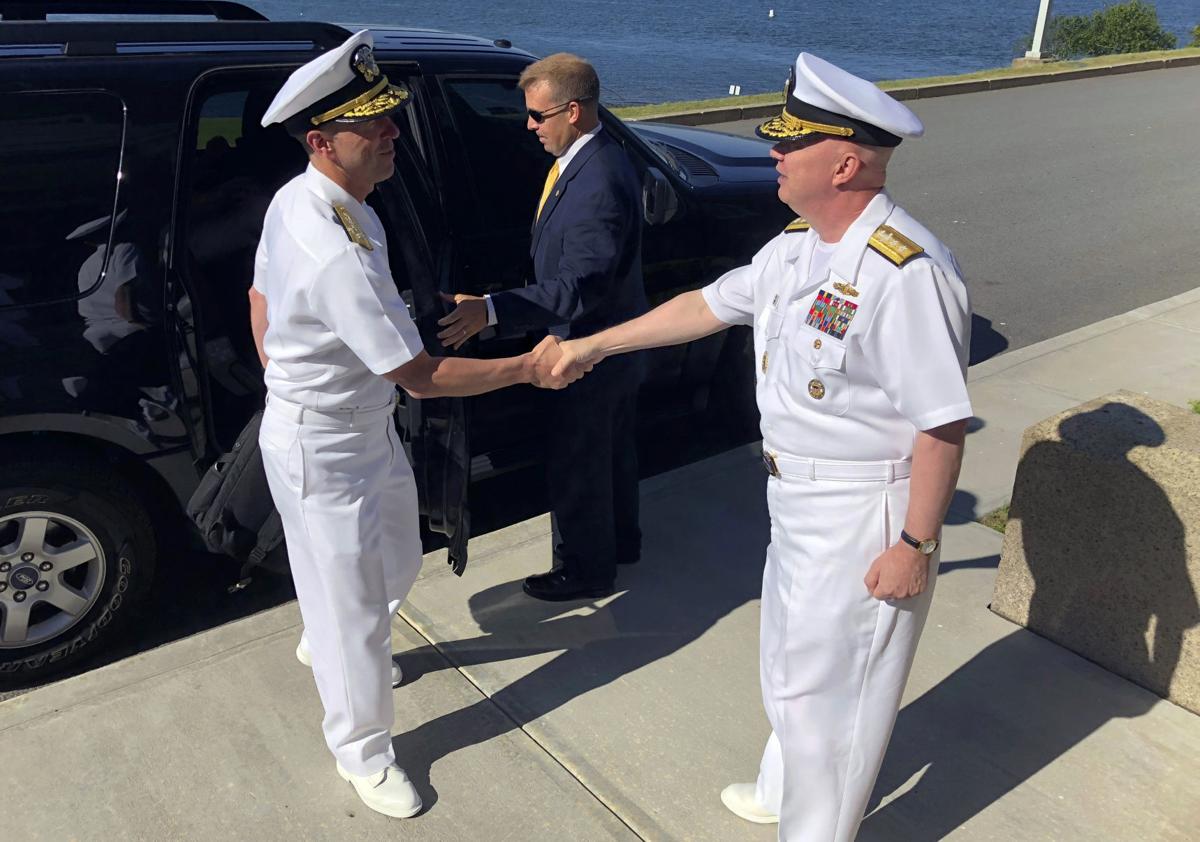 FILE - In this June 12, 2018, file photo, Adm. John Richardson, left, chief of naval operations, greets Rear Adm. Jeffrey Harley, president of the U.S. Naval War College in Newport, R.I. Dozens of emails, which span from December 2017 to May 2019, were shared with The Associated Press by people at the war college who said they were concerned about Rear Adm. Harley's leadership and judgment. (AP Photo/Jennifer McDermott, File) 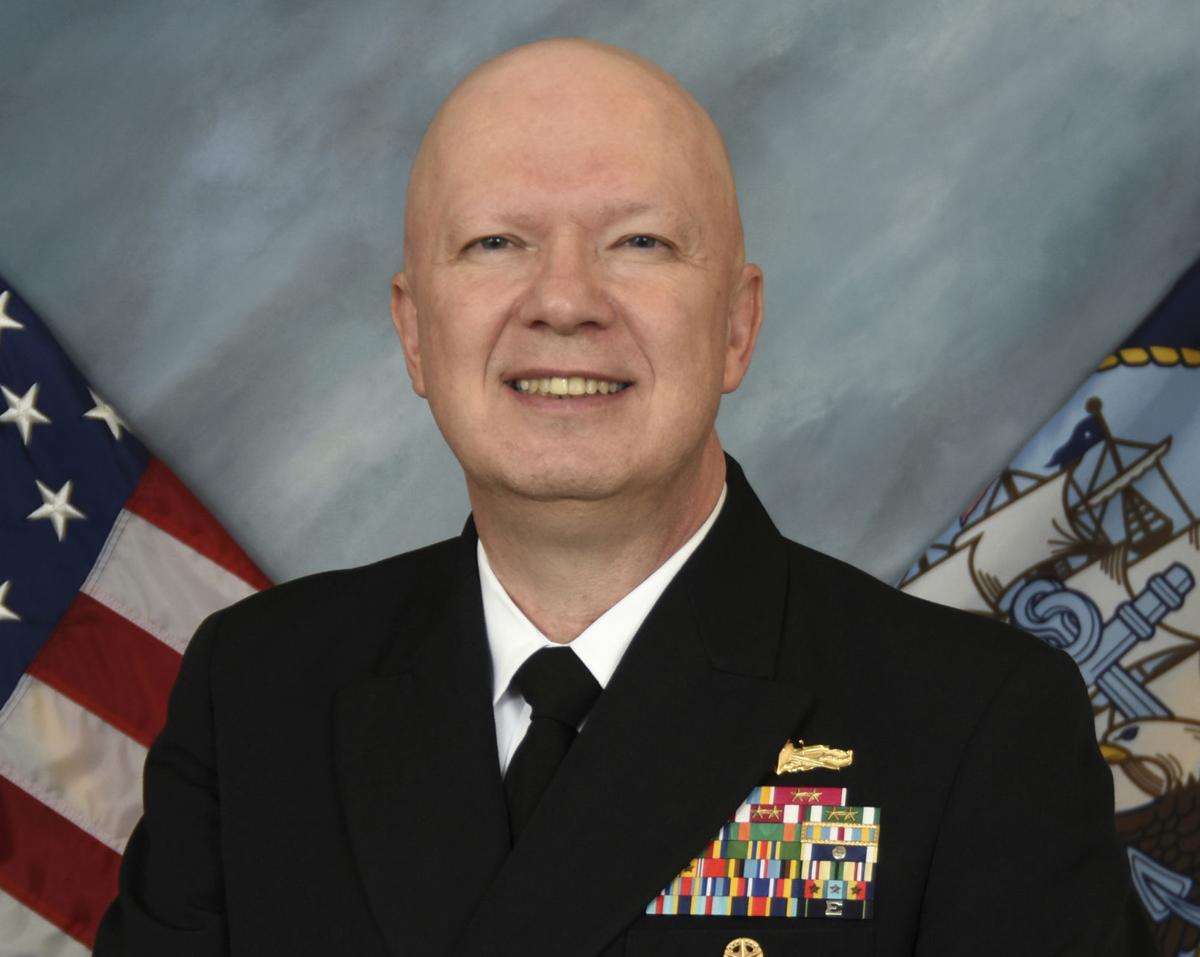 This image provided by the U.S. Navy shows Rear Adm. Jeffrey Harley, president of the U.S. Naval War College in Newport, R.I. Dozens of emails, which span from December 2017 to May 2019, were shared with The Associated Press by people at the war college who said they were concerned about Rear Adm. Harley's leadership and judgment. (U.S. Navy via AP)

NEWPORT, R.I. — The military is investigating the president of the U.S. Naval War College amid allegations that he spent excessively, abused his hiring authority and otherwise behaved inappropriately, including keeping a margarita machine in his office.

Multiple current and former college employees told The Associated Press they have raised serious concerns for over a year about Rear Adm. Jeffrey Harley's conduct at the helm of the elite school that grooms future admirals and generals.

Dozens of emails and other documents obtained by the AP show the college has struggled to make payroll under Harley's leadership and spent about $725,000 annually on raises while facing an annual shortfall of $5 million or more.

Harley has also sent a series of emails to hundreds of students, faculty and staff that raised eyebrows, including offers of "free hugs" and games of Twister in his office.

In an interview with the AP last month, Harley blamed the fiscal strain on the Navy not fully funding new missions the college has taken on. And he said the emails merely reflected his lighthearted leadership style.

A small group of longtime college employees filed an anonymous complaint in April 2018 with the Navy's office of the inspector general.

The group members said they "hold no ill-will" toward Harley but that "his destructive and ethically challenged leadership style is destroying the college," according to a copy shared with the AP by two of the workers.

They, along with two other current employees and one former worker, spoke about their concerns with Harley on condition of anonymity because they feared professional retaliation.

Two of them told the AP that they and others were interviewed by investigators in September, but nothing happened. The group contacted the inspector general again in January with additional allegations of Harley flouting Navy rules and norms.

"The drinking continues. Morale is at an all-time low," the employees wrote in a January email. "Your biggest concern should be, however, the financial situation at the college."

They said they heard nothing again from investigators until last month, after the AP asked the Navy about Harley's conduct.

The Navy confirmed this week that it has received multiple complaints about Harley's behavior. It has not taken action against him so far.

"We do not comment on ongoing investigations," Navy spokeswoman Lt. Christina Sears said.

Harley said he could not discuss any investigation: "That's Navy business. But I think you'd be surprised to know that on any given day about 85 officers are under investigation," he said.

He declined Wednesday to answer a series of questions about additional allegations — including his use of a margarita machine — and sent a campus-wide email downplaying the complaints, saying they were from "a few individuals."

"All the decisions questioned in the allegations were subject to legal review either before or after the fact, and I believe that all of my decisions are within my authorities," Harley wrote.

Founded in 1884 when the Navy was still transitioning from wooden ships to steel, the waterfront college in the well-heeled sailing community of Newport has served as a pre-retirement post for distinguished wartime commanders, including Vice Adm. James Stockdale, the Vietnam prisoner of war and Medal of Honor recipient.

Previously an assistant deputy chief of naval operations in Washington, Harley assumed command in July 2016 at the post-graduate institution, which graduates about 1,600 students each year and employs around 700 faculty and staff.

Harley himself acknowledged in a campus email in February that the school had to make across-the-board cuts to ensure it met payroll. Just last week, he asked for more cutbacks in travel budgets.

All five current and former employees blamed that in part on substantial raises — as much as $10,000 to $15,000 per year — that Harley appeared to grant unilaterally to some faculty, rather than consulting the college's other senior leaders, as is customary.

Harley has told staff and faculty in emails this spring that the college was remedying pay gaps between men and women, balancing pay between departments and creating a system to avoid future disparities.

The employees also complained that Harley had hired unqualified people to high-paying jobs, sometimes exploiting a federal rule meant to allow colleges to quickly hire qualified professors. They questioned Harley's spending of tens of thousands of dollars on certain contractors and others, who they said brought little benefit to the college.

Among the other allegations made with the inspector general's office is that Harley drinks on duty. The employees alleged that Harley has a margarita machine in his office, and that "he moves the machine to suit his mood," sometimes to a dining area for school leaders.

"He has invited members of the staff to his office for afternoon drinks, setting his employees up to either comply because he's the boss or uncomfortably decline his offer because they do not want to drink during the workday," the staffers said in their complaint.

Harley has also sent campuswide emails inviting people to his office for a game of Twister, in which players contort around one another on a mat, or for "free hugs (if desired)."

Workers called his often-rambling emails unbecoming of an admiral and said they left people wondering how Harley was spending his time and school resources.

In an email sent May 12, Harley boasted about a new portrait of himself, painted on velvet. He attached photos showing the picture hanging in a campus building among those of other college presidents.

"He preferred cats, Star Trek, red wine, baseball and was positively obsessed with achieving the perfect hair day," according to a label he said he mounted with the picture.

Harley, who is bald, said the portrait was made by a professor who paid for it himself and gave it to Harley as a joke. He called it a way to poke fun of himself.

In last month's interview, Harley called himself quirky and said he tries to use humor to break the tension in what can be a high-pressure environment. As a leader, he said, he will hug back appropriately. He said he does not actually own Twister.

"I do not believe there's anything in those emails that are derogatory, unethical, immoral or illegal," he told the AP.

Harley said he's making decisions in the best interest of the Navy and the college, and he believes his tenure has been extended for a fourth year at the war college, though the Navy is considering hiring a new president who would be a civilian. That would be a first for the college, and it could shorten Harley's time in Newport.

Trump wants federal hiring to focus on skills over degrees

WASHINGTON (AP) — President Donald Trump is preparing to direct the federal government to overhaul its hiring to prioritize a job applicant’s skills over a college degree, administration and industry officials say.

Top officials in the White House were aware in early 2019 of classified intelligence indicating Russia was secretly offering bounties to the Taliban for the deaths of Americans, a full year earlier than has been previously reported, according to U.S. officials with direct knowledge of the intelligence.

The woman approached the bison to take a picture and got within 10 feet of it multiple times before it gored her on June 25, according to a news release from the park.

Coronavirus update: Record new daily infections in US; the science behind bar closures; and more

The U.S. recorded 50,700 new cases, according to a tally kept by Johns Hopkins University, as many states struggled to contain the spread of the pandemic. Get caught up on the latest virus news here.

LOUISVILLE, Ky. (AP) — With only one polling place designated Tuesday for Louisville, a city of 600,000 people, voters who didn’t cast mail-in ballots or show up early could face long lines in Kentucky’s primary, the latest to unfold as the pandemic triggers unprecedented election disruptions across the country.

As a surge of infections hits the South and West, GOP officials are pushing back against the notion that masks are about politics, as President Donald Trump suggests. Get caught up on the morning's virus developments.

Health experts agree this will be a pivotal moment in determining whether the nation slides into a deeper mess. Get caught up on the latest developments here.

A man and a woman stood outside a home on the private Portland Place in the Central West End, yelling and pointing guns at protesters as they walked by.

Get caught up with the morning's top headlines, the national weather forecast, today's celebrity birthdays and more.

ST. LOUIS (AP) — A white couple who stood outside their St. Louis mansion and pointed guns at protesters support the Black Lives Matter movement and don't want to become heroes to those who oppose the cause, their attorney said Monday.

FILE - In this June 12, 2018, file photo, Adm. John Richardson, left, chief of naval operations, greets Rear Adm. Jeffrey Harley, president of the U.S. Naval War College in Newport, R.I. Dozens of emails, which span from December 2017 to May 2019, were shared with The Associated Press by people at the war college who said they were concerned about Rear Adm. Harley's leadership and judgment. (AP Photo/Jennifer McDermott, File)

This image provided by the U.S. Navy shows Rear Adm. Jeffrey Harley, president of the U.S. Naval War College in Newport, R.I. Dozens of emails, which span from December 2017 to May 2019, were shared with The Associated Press by people at the war college who said they were concerned about Rear Adm. Harley's leadership and judgment. (U.S. Navy via AP)