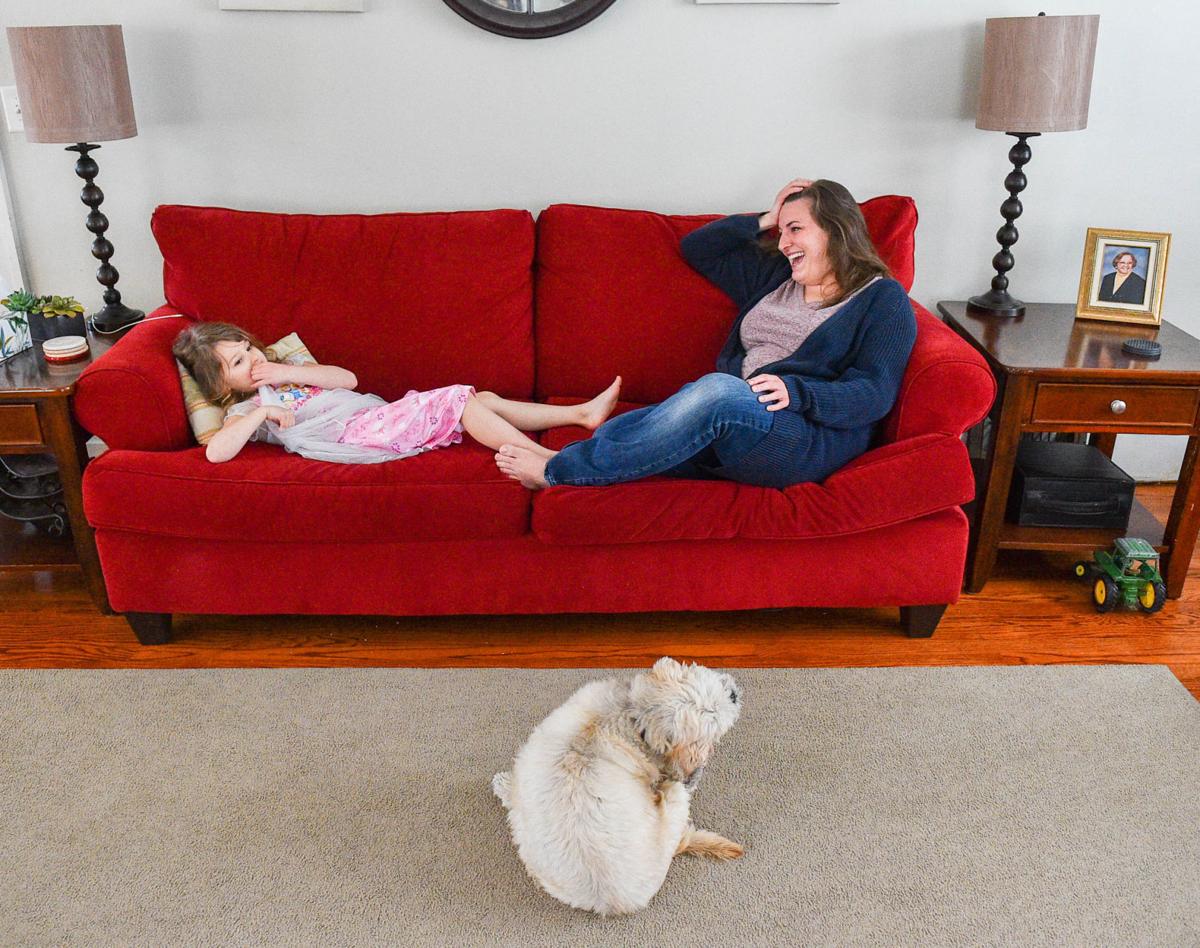 Annabelle Mandle, 5, and her mom, Cat, talk about what to have for lunch while sitting on the couch Thursday at home in Moline. 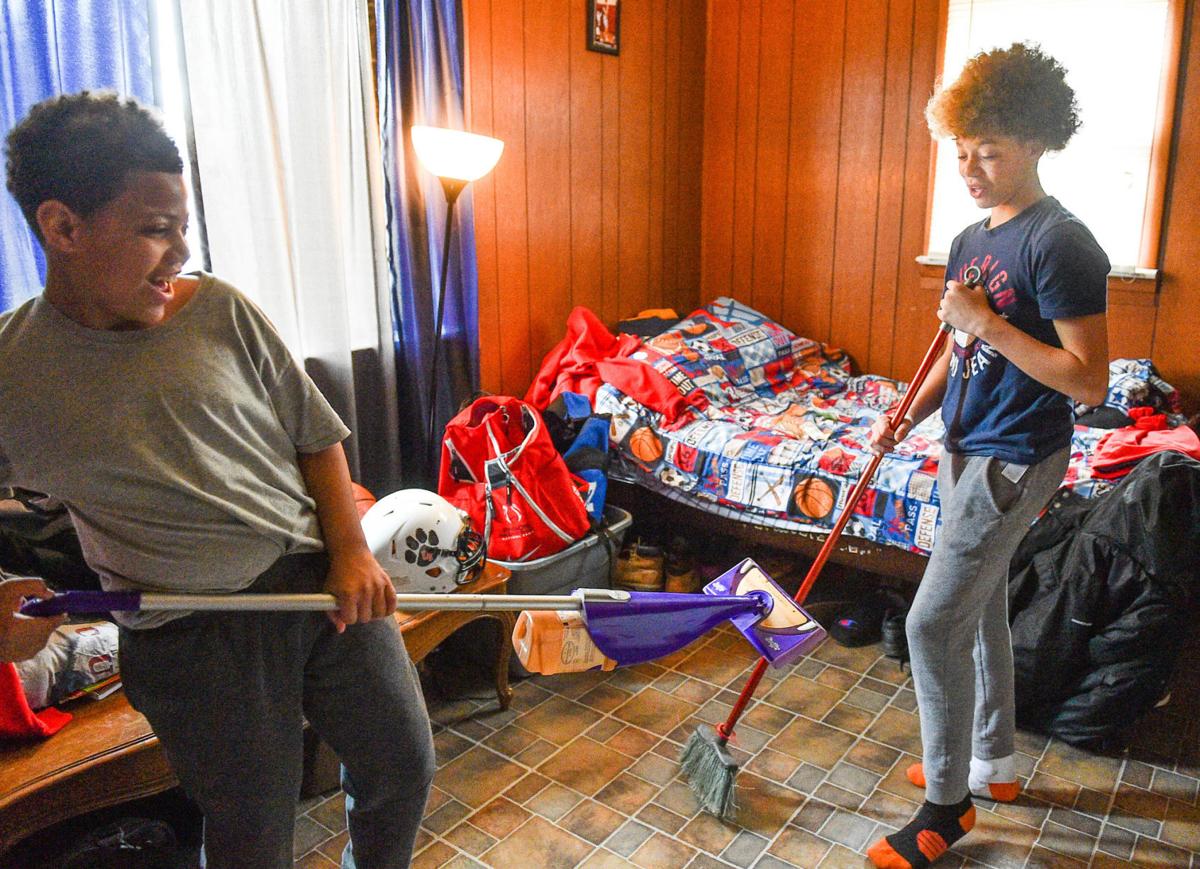 Jamin Simons, 11, and Synceare Simons, 12, pretend to fight with their mop and broom as they clean their bedroom March 16 in East Moline. The boys and their father, Sam, spent the day cleaning since their school has been closed because of the COVID-19 virus.

Spring break is now over in every district in the Quad-Cities. But instead of helping their kids get back into the swing of things in school, parents are buckling down to figure out what they’ll do to keep the kids occupied, entertained, and educated while schools are closed.

Local school districts are closed through April 10 in an effort to slow the spread of COVID-19, the new coronavirus.

Across the country, colleges and universities — including all those with campuses in the Quad-Cities — are announcing they’re replacing face-to-face courses with “alternative delivery” classes through the end of the semester.

Davenport Superintendent Robert Kobylski said in a press conference last week that school officials are preparing for the worst while hoping for the best when asked if the district was prepared to close for a longer period if necessary.

At least until April 10, though, students are home. While some parents are taking a laissez-faire approach to keeping their kids busy, others are armed with a game plan.

Usually, Amanda Berger, of Bettendorf, waits tables six days a week. With restaurants and bars closing, though, she’s at home with her two kids, ages 5 and 7.

“It’s kind of a blessing,” she said. “The only good thing is it gives me time to work with them on schoolwork.”

Berger is keeping her kids on a schedule, watching online math and reading programs they have access to through school, filling out workbooks she got from her sister, and learning how to do chores “the way Mom likes them.”

There are breaks in between for “imaginary time”: They can hang out, play with toys or do crafts, but they aren't allowed to use their tablets until everything is done.

Berger said she feels strongly about keeping them on a schedule so that they keep learning and making academic progress. For a week, though, she said she’ll let them stay up late and sleep in.

“It’s overwhelming,” she said. “You just need to have a game plan. They can have that one-on-one attention they can’t get in a classroom, and more attention I couldn’t give them when I work six days a week."

“They’ve been going outside and playing ball,” he said. They also are spending a lot of time reading and playing video games.

“This is their spring break right now, regardless,” he said last week.

Colleges and universities largely have pivoted to online classes, including video discussions over apps like Zoom. All Saints Catholic School in Davenport sent packets of extra work home with students, in case the school ends up being closed for an extended period of time.

K-12 districts face an equity issue, though: If not all students have access to the internet at home, or three kids have to share one device, how can a district ensure they’re educating all students? In Davenport, at least, Kobylski said last week officials were waiting for instructions from a higher authority.

Guidance released by the Iowa Department of Education indicated public districts may choose to use online learning options, but may not require student participation. While the guidance notes that any online options should be offered as equitably as possible, it doesn’t provide clear examples of how to do so, especially for students receiving special education services.

Whether it is online or printed packets, alternative delivery poses specific difficulties for students with special needs. Jennifer Starr, of Davenport, has two children who are on the autism spectrum, and while she’s not as concerned about her daughter, who’s older, she said there are services her son just won’t be able to receive out of school.

“We were making great strides with socialization, and now we have to practice social distancing,” she said. Speech therapy, occupational therapy and physical therapy are also harder to deliver, if they’re even deliverable at all.

“We’re not taking them to their specialists in Iowa City. We’re just kind of hunkering down at home.”

There are options available outside of schools, too. The Davenport Public Library is hosting story times over Facebook. In Facebook groups, those who already home-school are doling out advice on how to teach at home. Parents are figuring out how to explain to their kids why they’re home.

“We’ve talked to them a little bit,” Berger said. “I don’t think they understand the magnitude of any of it. But they’re 5 and 7 — that’s good.”

COVID-19 update from around the Q-C

Annabelle Mandle, 5, and her mom, Cat, talk about what to have for lunch while sitting on the couch Thursday at home in Moline.

Jamin Simons, 11, and Synceare Simons, 12, pretend to fight with their mop and broom as they clean their bedroom March 16 in East Moline. The boys and their father, Sam, spent the day cleaning since their school has been closed because of the COVID-19 virus.