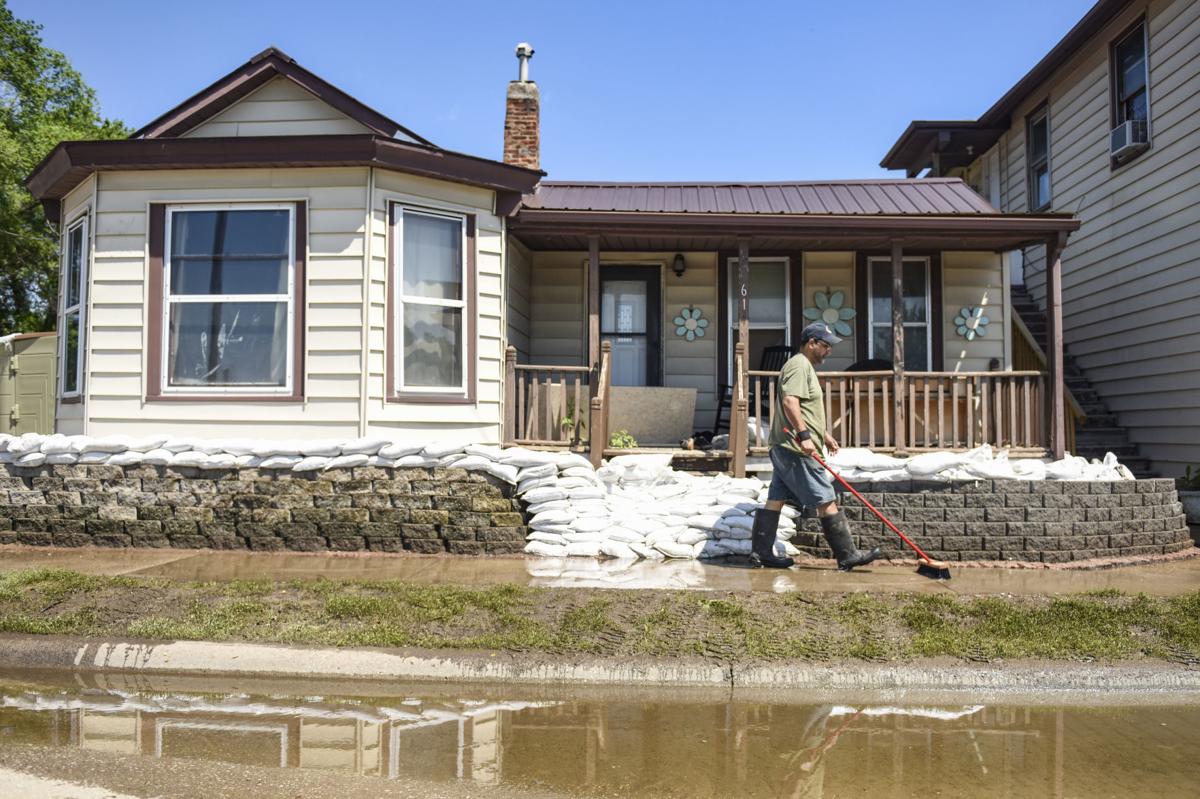 Tony Mendez sweeps the side walk outside of his rental home and restaurant, Clark's Landing located on Front Street, Monday in Buffalo. Mendez will be reopening his restaurant after a flood wall break caused him to close his business for 28 days. 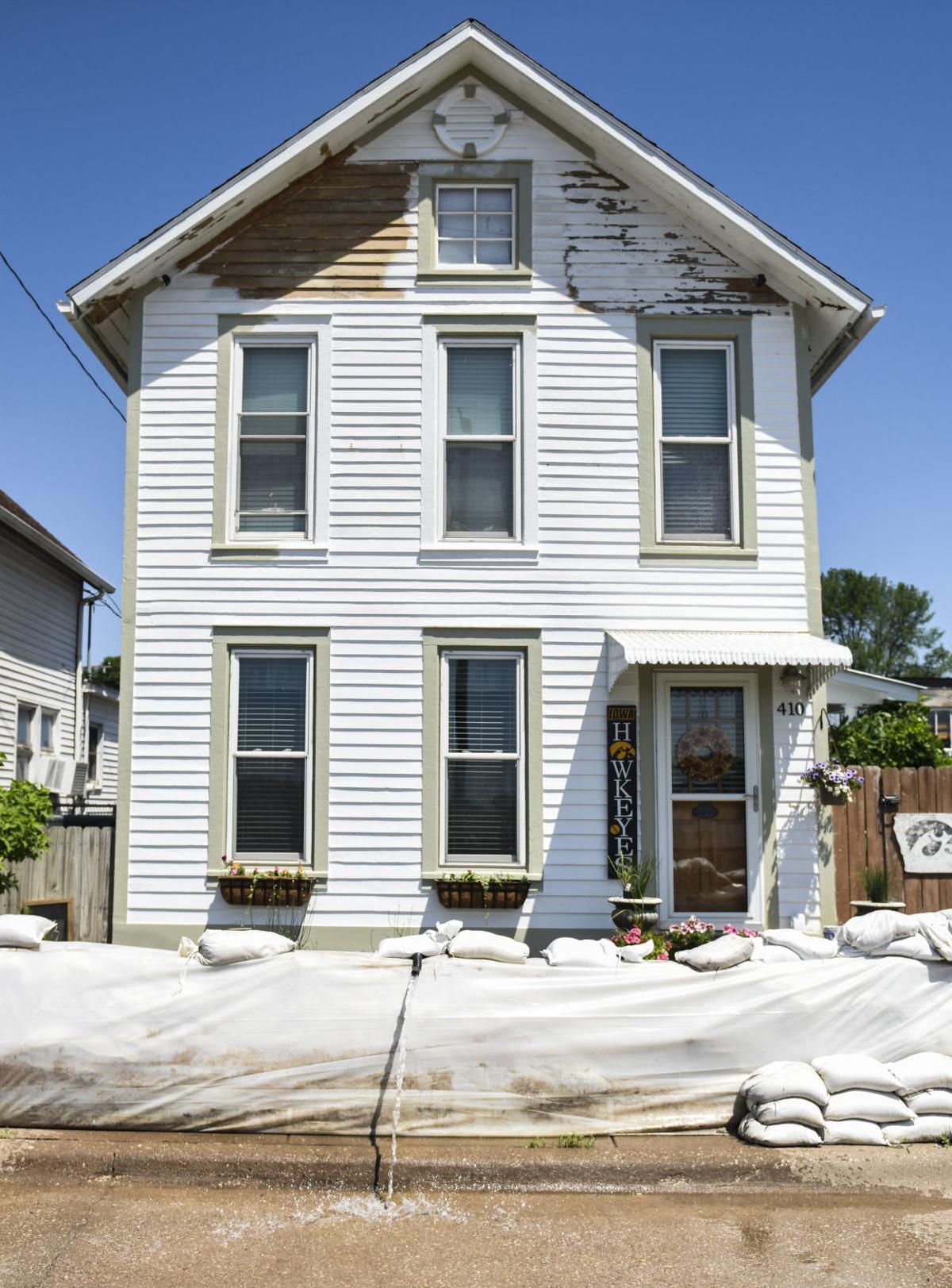 Sandbags and plastic are used to protect against floodwater reaching a home on Front Street in Buffalo on June 10. 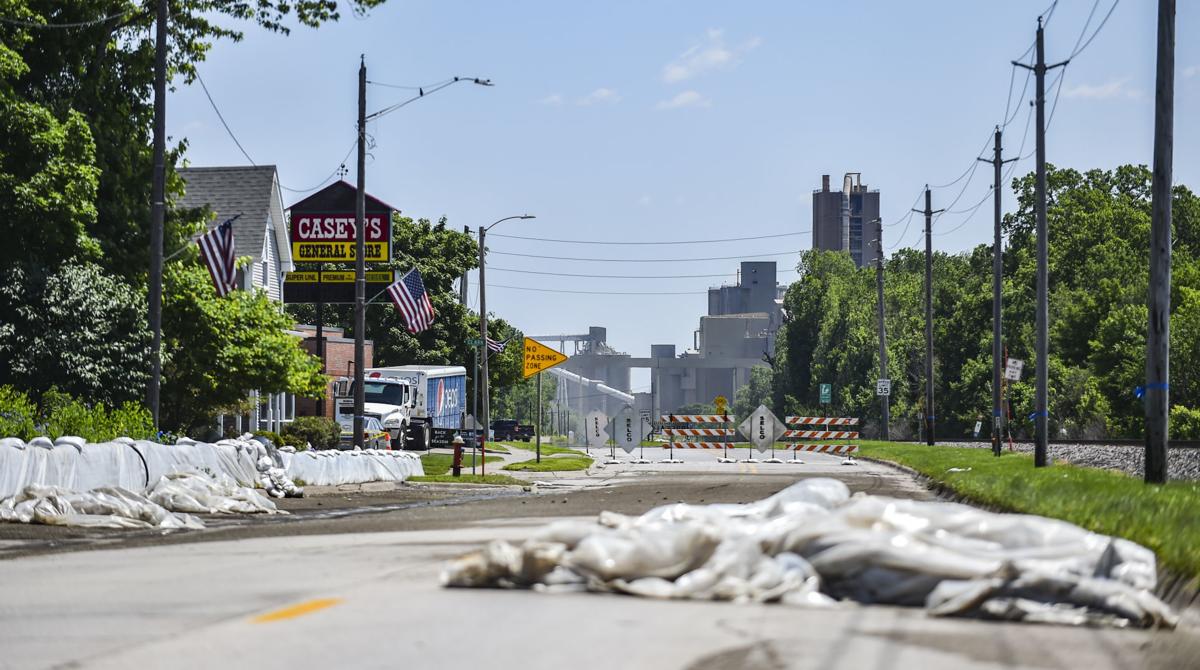 Sandbags and plastic used to protect against flood waters lie in the streets of Front St. Monday, June 10, 2019, in Buffalo. 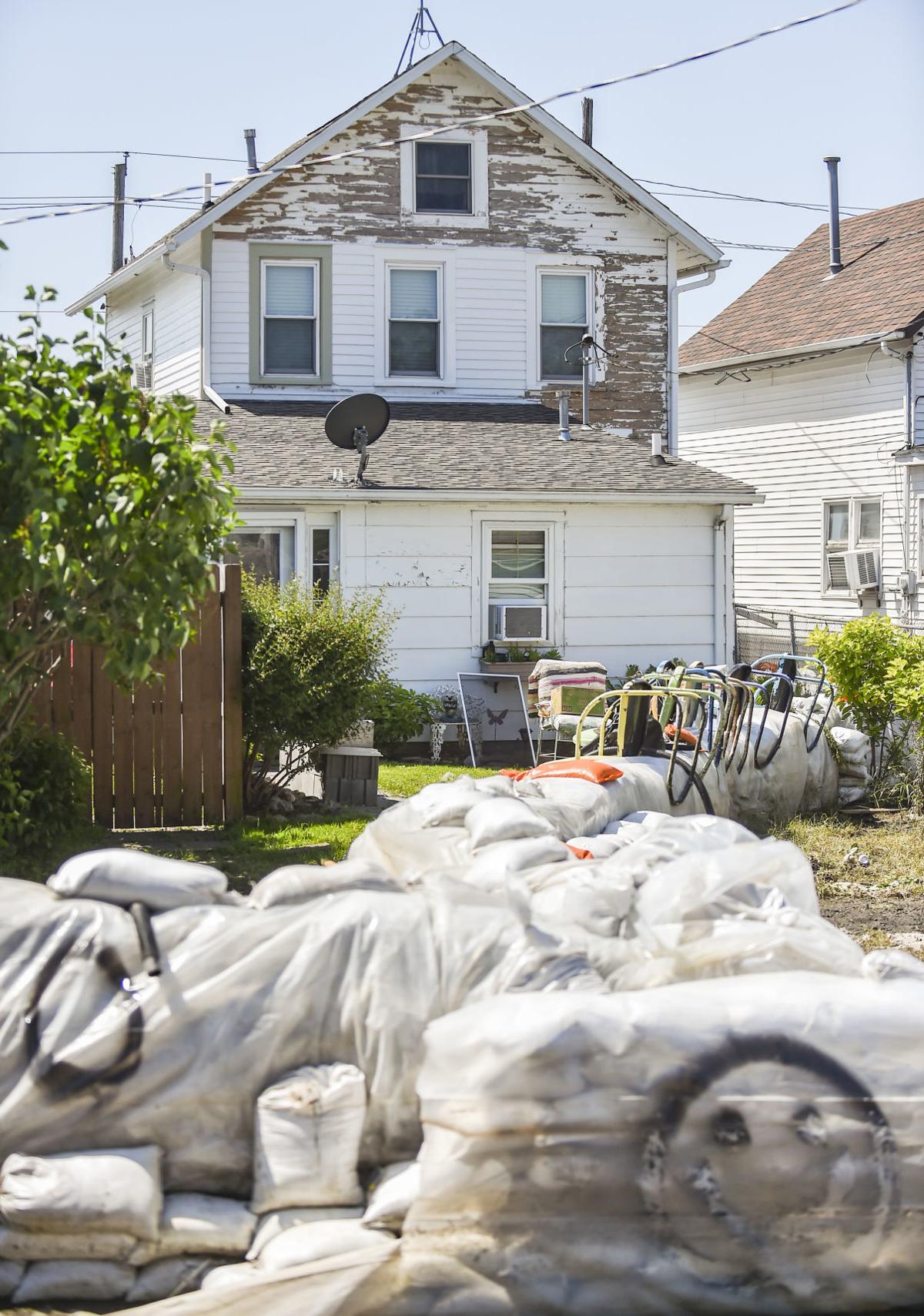 Sandbags and plastic used to protect against flood water protect a home on Front St. Monday, June 10, 2019, in Buffalo.

That's what Buffalo Main Street resident Ron Brougham says about the flooding in Buffalo, which has had a massive effect on residents and businesses.

How did Front Street resident Elmer Brookhart describe the flooding? "Worse than I've ever seen."

"It's been torture," said Clark's Landing owner Anthony Mendez, who was preparing the Front Street restaurant to reopen Tuesday.

Multiple businesses and residents had temporary sandbag floodwalls fail during the record-breaking flooding in May.

Now, as the waters recede, they're left to rebuild.

Brookhart said he would have been in real trouble if he hadn't had help from volunteers and some of his tenants on Front Street. "I'm 71 years old, it's pretty hard to start throwing sandbags and stuff," he said. He received $3,500 from flood insurance, which paid $6,000 minus the deductible.

His next job is going around his house to check the foundation, he said.

Franklin Street resident Les Buffington said the biggest impact for him is traffic. "We have to dodge around the water."

Mendez, who bought Clark's Landing just five days before the catastrophic 1993 flooding, said the sandbags failed during the second crest in late May.

"Basically, the river level outside was the river level inside. About 8 minutes for the restaurant to fill up," he said. "The fire department came down and helped me patch up my wall here with some sandbags that were no longer in use from Judy's (Barge Inn) because her wall had already been topped over."

About 12 volunteers helped patch the hole in the wall, and then the department got their discharge pumps in there, Mendez said. "They pumped it down quick enough to where it might have been on the main floor for three hours, and it was about maybe 3 inches," he said.

He has bought three gas pumps since the flood waters came in, because the fire department couldn't keep its pumps there and he had to manage it himself.

After the water was under control, Mendez's employees helped clean everything.

"It was very fortunate that we were able to get the water off the main floor so quickly," he said. But he had to replace the kitchen floor, pulling up at least a third of it down to the floor joists.

In total, Mendez says they've been closed 28 days, though that's not counting how business has slowed down since they've been open.

Mendez says the city has been very helpful with providing materials, and volunteers were very helpful in filling sandbags. He also praised the work of the volunteer fire department were ready, willing and able to help, 24 hours a day.

Facebook has also been very helpful in spreading the word, Mendez said. The first day when the water came in, a photo of the water on the floor received 107,000 views. They've been averaging about 3,800 since, he said.

SENB Bank Banking Center Manager Mary Butler says the location in Buffalo has been sandbagged since the beginning of April. They've been closed for about 21 days between May and June. "Obviously that does impact our staff, relocating our staff so that they continue to work, trying to support our community any way we can," she said.

The bank didn't have water damage to the property except for a ventilation system that runs underneath it.

After cleaning and sanitizing, the bank opened back up for about two weeks. To check in on the building during the first flood, she had to wear chest-high waders to get into the building. Then the flood waters returned. So SENB had to repeat that process, while also trying to service customers. "Our building was kind of like an island, we were surrounded on all four sides by water," Butler said.

A June 10 press release from the Federal Emergency Management Agency provided an update on Iowa's recovery.

Scott County is among the nine counties in Iowa that have been designated for federal Individual Assistance to homeowners and renters. "As of June 7, 300 Requests for Public Assistance have been submitted for approval by government entities and nonprofits seeking to be eligible for funds to repair or replace damaged infrastructure," the release reads.

In addition, Scott County residents who are eligible for federal Individual Assistance whose employment or self-employment was interrupted or lost due to flooding and storms from March 12-May 16 may apply for disaster unemployment insurance. Scott County applications are due July 1 and can be found at https://www.iowaworkforcedevelopment.gov/disaster-unemployment-assistance-0

As river levels finally drops, here's what's next for the Quad-Cities

The Quad-Cities long, long flooding nightmare appears to be almost over.

Even though the Village of East Davenport has stayed dry during the flood, business owners are facing difficult decisions as slow traffic caus…

Ahead of its grand opening in Davenport on June 13, Portillo's partnered and raised money with the Quad-Cities Community Foundation and River …

Scott County farmer Robb Ewoldt has around $80,000 worth of soybeans in storage, waiting to be shipped down the Mississippi River. 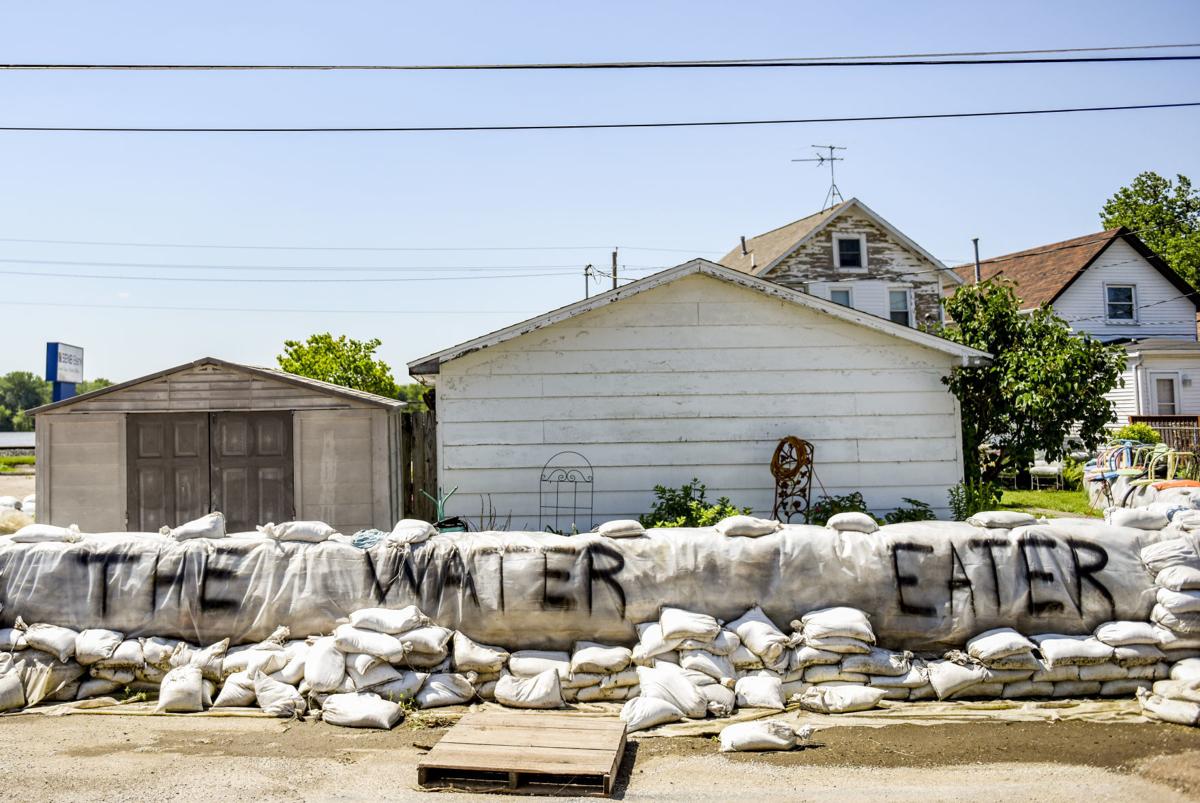 A wall of sandbags protecting a home along Front Street has the words, "The Water Eater" spray painted on it Monday in Buffalo.

Tony Mendez sweeps the side walk outside of his rental home and restaurant, Clark's Landing located on Front Street, Monday in Buffalo. Mendez will be reopening his restaurant after a flood wall break caused him to close his business for 28 days.

Sandbags and plastic are used to protect against floodwater reaching a home on Front Street in Buffalo on June 10.

Sandbags and plastic used to protect against flood waters lie in the streets of Front St. Monday, June 10, 2019, in Buffalo.

Sandbags and plastic used to protect against flood water protect a home on Front St. Monday, June 10, 2019, in Buffalo.