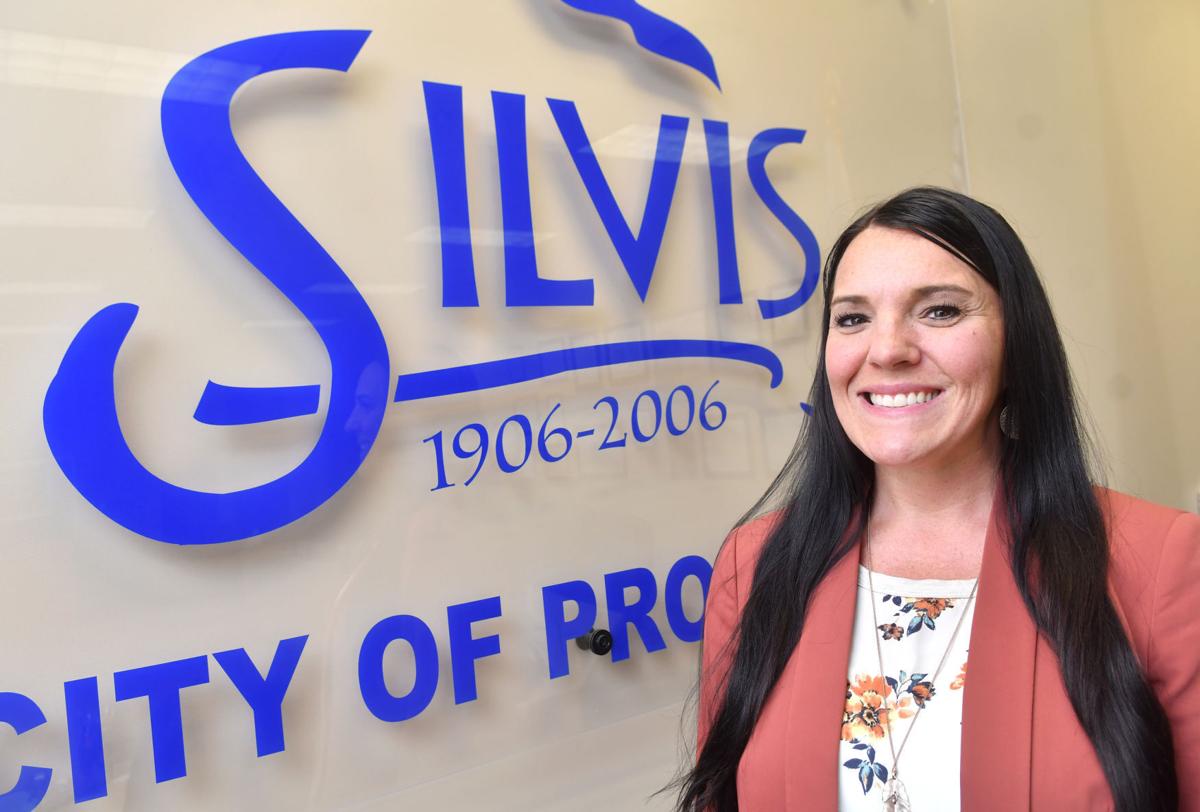 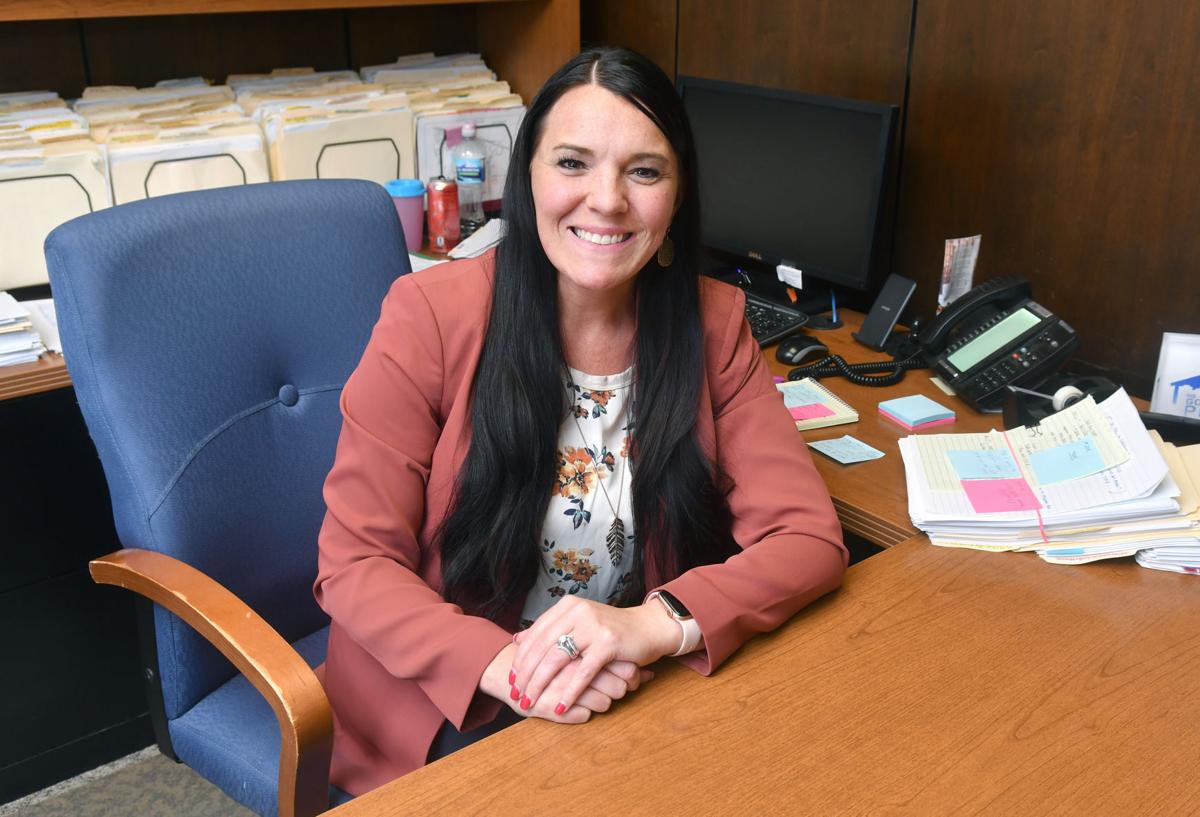 That’s how she keeps organized parenting eight kids in a blended family.

And being detail oriented is what helps her keep Silvis’ police, fire, treasury, and public works departments aligned, she says. Lemke, 36, and her family have lived in Silvis, population roughly 7,500 people, since 2013. Her new administrator office is across the street from her husband’s chiropractor office, Bobb Chiropractic Center, named for its previous owner, a long-time chiropractor who she said welcomed her and her husband, John, like family.

So, when she was offered the job, she said it felt like the right next step.

“We're very invested in this community already because this is where our livelihood comes from,” she said. “My husband's business is here and we've made a lot of good friends, and we care a lot about the community. We spend a lot of time here.”

Lemke, who started as Silvis’ new city administrator in May, previously worked as a management analyst at the City of Davenport office. There, she directed the Good Neighbor Project, an organization that encouraged neighborhoods to host events and get to know city and police staff in those areas, and led the Citizens Academy, a nine-week program where people learned about how city government works.

Before coming to the Quad Cities, she worked for now-closed Ashford University campus in Clinton and earned two master’s degrees. When her husband started at Palmer Chiropractor School, she began looking for a job in the Quad-Cities with good benefits to support their big family.

She applied for a Davenport city administrative assistant position. Little did she know it would launch her into a career dedicated to community engagement with local government.

“I got in at the administrative assistant level for the mayor in Davenport,” she said. “And I wasn't there very long before I knew: this is really interesting -- the system that people don't probably think about in their day-to-day life, but really impacts how their day to day life works.”

She was promoted to a management analyst in Davenport where she worked with each department on community planning and economic development.

“I was basically support for any of the department heads that had a big project going on, and the administration that I was serving under in Davenport was very in tune and very committed to developing all of their staff, so I had opportunities to work in every department on every level,” Lemke said. “I spent full days with each department out in the field, public works, police, fire, finance… So that got me really prepared to take on a bigger role that does involve so many departments.”

In her role as Silvis city administrator, Lemke’s base salary is $80,000 plus a city employee benefits package.

The previous city administrator and public works director, Jim Grafton, was ready to retire and take on a new role,when he ran for mayor against incumbent mayor Matt Carter. Carter won the Democratic primary election with 63% of the vote.

Carter then formed a six-person special commission to select a new city administrator made up of himself, an alderman, a business owner, and three residents. After reviewing resumes and conducting interviews, Carter said one candidate really stood out – Lemke.

“Aldermen wanted to find someone who is local or semi-local who understands the Quad Cities as a whole, and Lemke fulfilled that by being local, but not too local with fresh pair of eyes to look at things differently,” Carter said.

He said Lemke impressed the commission with her experience in city government plus her attention to detail and public speaking prowess.

“We definitely got a win on this one,” Carter said.

One priority for Lemke is building on Silvis’ growth from the last two decades. The city aggressively used tax increment financing (TIF) districts, which is a public financing method that is used to incentivize development, and goes into a fund for infrastructure and community-improvement projects.

Lemke said as she’s getting to know the city and its elected officials’ visions for Silvis, she wants to create a five year plan for economic development and keeping up with infrastructure in the growing city.

“There's going to be heavier traffic on a lot of these roads and so what do we need to plan for keeping those roads maintained and able to sustain that increased traffic, different amenities that we need for the residents when they're here enjoying all of these new things that have come, what are some more things that we can put out there for them to enjoy maybe some little pocket parks or things like that,” she said.

One area she said the city would be looking at is 1st Avenue and how to knit the two sides of town together under a cohesive Silvis identity.

“Probably the start of making those future goals happen is to really get some larger conversation started about how this all fits together,” she said.

Lemke said what she likes about Silvis is the tight knit feeling of smaller city. Even during her first day, people would stop in to welcome her or tell her about Silvis.

“You feel it as soon as you get here,” she said. “Everybody's excited to tell you about it, they'll show you everything. They'll drop what they're doing and walk around and tell you like oh this is where this happened. I mean they're just really excited to share their community.”

WH: We 'don't know' if Russians are playing games

WH: We 'don't know' if Russians are playing games

Sarah is the Bettendorf, East Moline, and Silvis reporter for the Quad City Times covering local government and news in the those areas. She graduated from the University of Iowa this spring and was the editor of the student-run newspaper The Daily Iowan.

Temperatures won't reach the 90s like last week, but this week still will be dry. Here are the weather details from the National Weather Service.