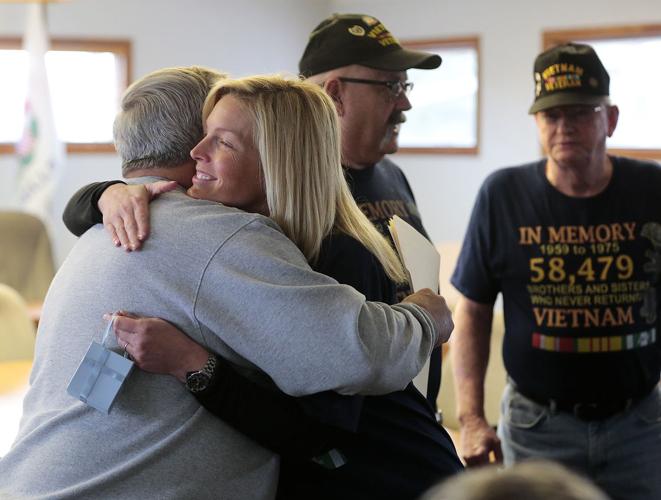 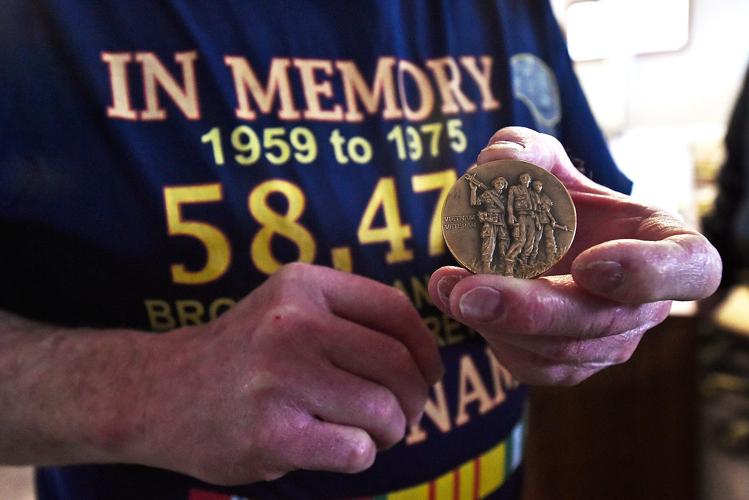 COLONA — State Rep. Tony McCombie, R-Savanna, was honored Monday by a group of veterans on behalf of her late Vietnam-veteran father, as well as thanked for a bill she introduced to help aging veterans and other seniors.

The local veterans presented her with a T-shirt commemorating the Vietnam Veterans Memorial, as well as a Vietnam service coin. Rep. McCombie's father, John "Jack" Reagan, served two tours of duty in Vietnam, beginning in 1967. He died in 2012.

Rep. McCombie was also thanked for her bill, introduced last month, that would raise the income limit for eligibility for the Senior Citizens Assessment Freeze Homestead Exemption, which offers seniors a reduced property-tax bill.

"We're thanking her for helping the veterans, and the seniors, and we're also honoring her father for being a Vietnam veteran," said Don DeLoose, 72, Silvis, an Army veteran.

"We just want to thank her. She's been so responsive to the veterans, and to the seniors," he added. "And there's a whole ton of us seniors. And you want to live a little bit longer, but you got to have money to live. And if you have to start paying $5,000 in (property) taxes instead of $3,000, you're not going to like it very much."

"It's just another little thing," Rep. McCombie said, after thanking the veterans. "I can't necessarily pass a budget, but if I can do something to help people in our district, then I'm doing my job to a degree."

Rep. McCombie said the higher income limit set in the bill isn't high enough to hurt cities and schools that depend on the taxes collected.

"I'm a real-estate appraiser so I understand — and also as a former mayor understand -- what assessed values do for communities and townships and our schools," she said, "and this was really a very conservative move, so it wouldn't really impact the bottom line to hurt municipalities and schools.

"And that's why I felt the 60 (thousand) and then the 65 (thousand) was better than some of those that might go all the way to 75,000. Because that really would have an impact."

Davenport is looking at a number of options for replacing Steve Ahrens, who managed leases, planned events, and was the face of the Davenport riverfront for 16 years.

One killed in fatal Davenport crash

While reading Madison Russo’s social media posts about having cancer and undertaking treatment, medical professionals noticed inaccuracies in the photos she posted of herself, according to a search warrant filed Wednesday by Eldridge Police in Scott County District Court.

An East Moline woman whose ex-boyfriend allegedly entered her apartment, struck her in the head with a loaded gun and held her captive was able to escape and call police after he fell asleep.

A Davenport man with felony convictions in Scott County for theft, burglary, drug possession and possessing a firearm as a felon has been sentenced to seven years in federal prison after he was caught with a firearm in Johnson County, Iowa, in 2020.

No fatalities are reported, but several people were treated for smoke inhalation at a Moline apartment fire.

A 40-year-old Thomson, Illinois, man has been sentenced to 29 years in the Illinois Department of Corrections after being convicted of sexually abusing an 18-year-old woman in May of 2022.

There were plenty of heroes who responded to the apartment fire Wednesday in Moline. Dave Qualls and Jordan Blake were two of them.

Netherlands may supply Leopard 2 tanks to Ukraine to fight Russia

Netherlands may supply Leopard 2 tanks to Ukraine to fight Russia