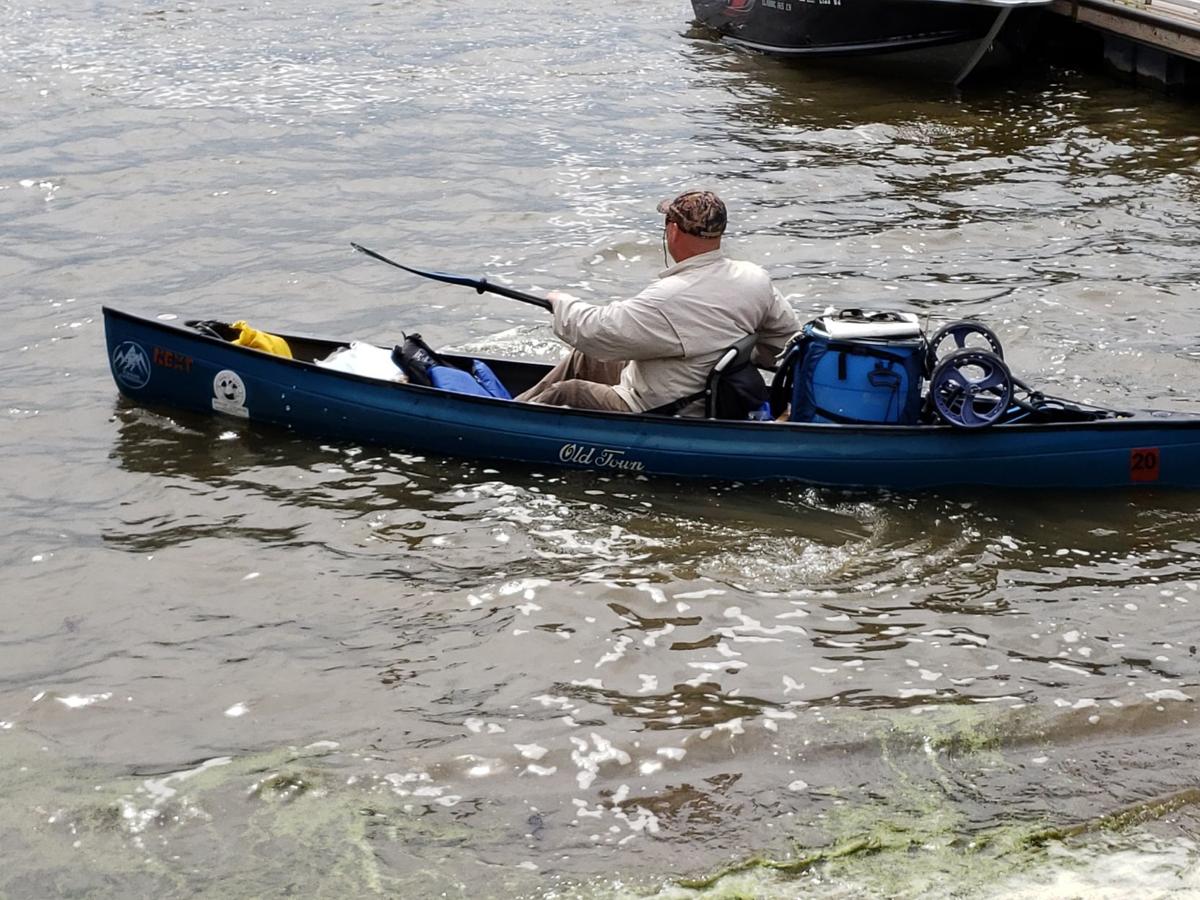 Greg York, one of the Warrior Paddlers who stopped in the Quad-Cities over the weekend, takes off in his canoe. 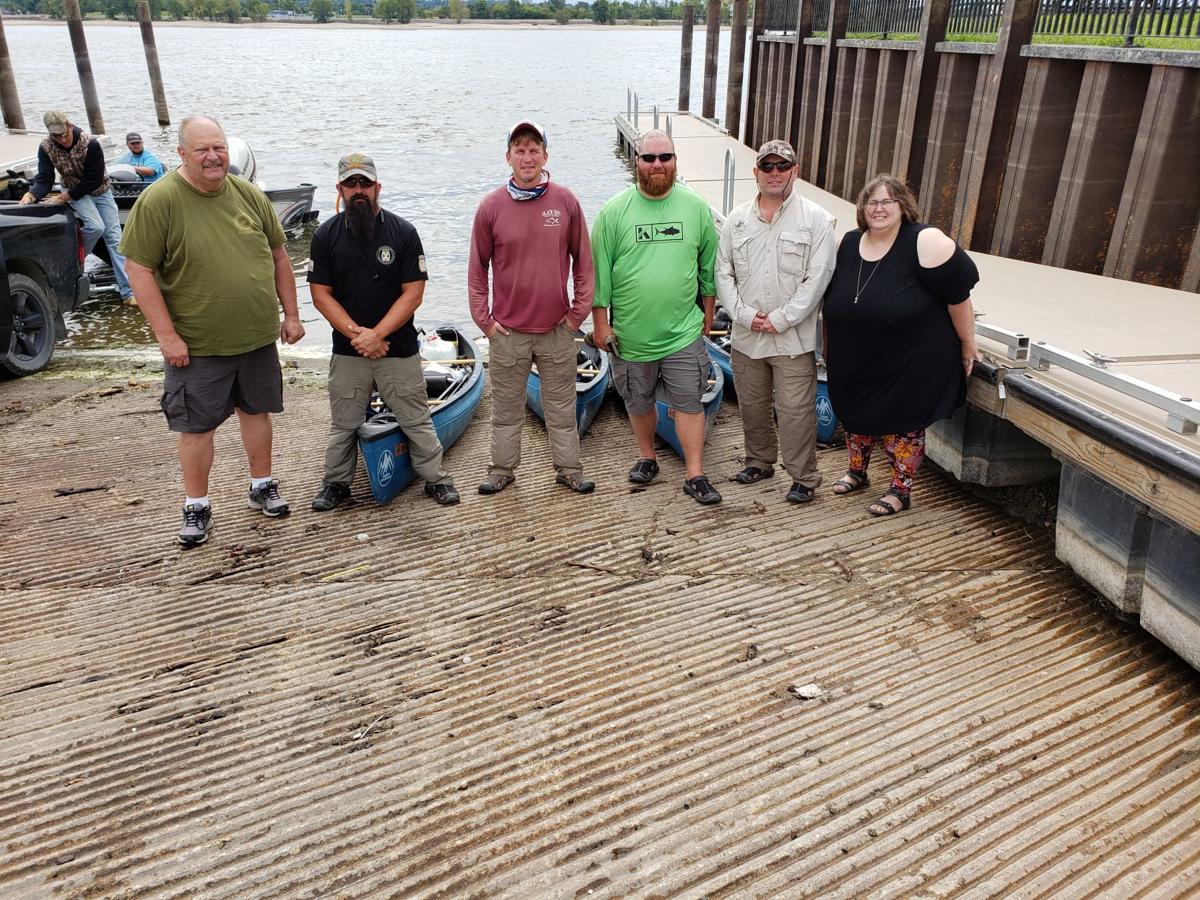 The Warrior Paddlers, a group of four veterans canoeing down the Mississippi River, made a stop in the Quad-Cities over the weekend. Veterans of Foreign Wars Post 9128 of Bettendorf hosted their overnight stay. From left are Ray Bowker, a VFW member; paddlers Brandon Blackmore, Ben Carpenter, Travis Brown and Greg York; and Melinda Smith-Pace, junior vice commander of the VFW 9128 Auxiliary.

BETTENDORF — The Warrior Paddlers, a group of four veterans who are paddling their way back to health during a trip down the Mississippi River, made a stop this weekend in the Quad-Cities.

The Warrior Paddlers is an annual canoeing expedition organized by a veterans' organization called Warrior Expeditions. Most of the veterans who go on these expeditions are dealing with some sort of service-connected mental health issue, such as depression or post-traumatic stress disorder. The expeditions give them time and space to deal with these issues.

They reached the Quad-Cities on Saturday, stayed here overnight and resumed their trip downriver Sunday.

Veterans of Foreign Wars Post 9128 in Bettendorf was one of the many VFWs and American Legion Posts to host the Warrior Paddlers during their journey.

“We want to help promote veterans' health and well-being. We thought that was a good way to help and facilitate that," John Weiland, Post 9128 commander, said of the post's decision about five years ago to get involved with the program. "It also builds community, camaraderie and a chance for veterans helping veterans."

“We coordinated with the Isle (Casino Hotel in Bettendorf) for hotel rooms for them, a place to keep their canoes overnight, all their transportation needs and meals,” Weiland said, explaining what Post 9128 did for the Warrior Paddlers.

Brandon Blackmore, 40, of Chalmette, La., was one of this year's Warrior Paddlers. He served as an infantryman in the U.S. Army.

The physical aspect of the expedition has been especially challenging for him because he has arthritis.

“Holding a paddle anywhere from six to 10 hours a day, when I wake up in the morning, I have a hard time moving my hands," he said. "I have to soak them in cool water, take my pain medication, and I use different muscle creams ... on my hands and my shoulders."

Camping is Blackmore’s favorite part of the expedition.

“I have seen more bald eagles in the last 47 days than I have seen in my entire life," he said of the outdoor life. "I still see them in Iowa, which is totally amazing to me."

Eagles may be a highlight of the trip, but another form of wildlife is one of the downsides.

“The mosquitoes are terrible," said paddler Travis Brown, 36, of Pace, Fla. He worked as a special intelligence agent with the U.S. Navy.

He is divorced and has two girls, ages 8 and 9, who live with their mom. He calls them daily.

“I am trying to do outdoor therapy and reset my brain and get back to where I used to be," Brown said. “My No. 1 goal is to finish the expedition."

“I don’t have PTSD, but I am working through depression, anxiety and some social issues. ... I have found the experiences helpful by being on the water and clearing my head and meeting some interesting people," he said.

Paddler Benjamin “Ben” Carpenter, 32, of Wentzville, Mo., said his previous experience with kayaking helped prepare him for the journey.

“I lived in Florida for four years and I owned a boat, and I did some kayak fishing in the ocean, and I am used to some big waves," Carpenter, who was an infantryman in the U.S. Army, said. "The Mississippi has a current, and it has some big boats that make big waves. For me, it's all the same."

Carpenter explained the difference between the canoes they are using on this trip and his kayak.

“I used to do a lot of shark fishing when I lived in Florida five or six years ago," he said. “I have caught several types of shark in my ocean kayak that is 6 inches shorter than the 17-foot-long canoe/kayak hybrid that we are using now. The other difference between the two is that the canoe that we are using now is a one-person canoe, and you sit inside the canoe. Whereas, the kayak, you sit on top of it.”

He said sunrises, sunsets and staying at hotels were his favorite parts of the expedition.

The fourth paddler, Greg York, of Pueblo West, Colo., was not available for comment because he was visiting a veteran he served with during his stop in the Quad-Cities.

This is the first time that all of the paddlers who started the journey have made it as far as the Quad-Cities.

“This is the first year that we had all four paddlers," Weiland said. “They always start with four, but by the time they get to us, one or two of them drop out by now.”

You can follow the Warrior Paddlers on Facebook and track their progress down the river. They have a Global Positioning System with them so you can track them within a couple of miles of their current position. They also have posted pictures of where they have been. Check them out at https://www.facebook.com/warriorpaddle2019.

Michael Pace is a student at St. Ambrose University in Davenport.

Greg York, one of the Warrior Paddlers who stopped in the Quad-Cities over the weekend, takes off in his canoe.

The Warrior Paddlers, a group of four veterans canoeing down the Mississippi River, made a stop in the Quad-Cities over the weekend. Veterans of Foreign Wars Post 9128 of Bettendorf hosted their overnight stay. From left are Ray Bowker, a VFW member; paddlers Brandon Blackmore, Ben Carpenter, Travis Brown and Greg York; and Melinda Smith-Pace, junior vice commander of the VFW 9128 Auxiliary.