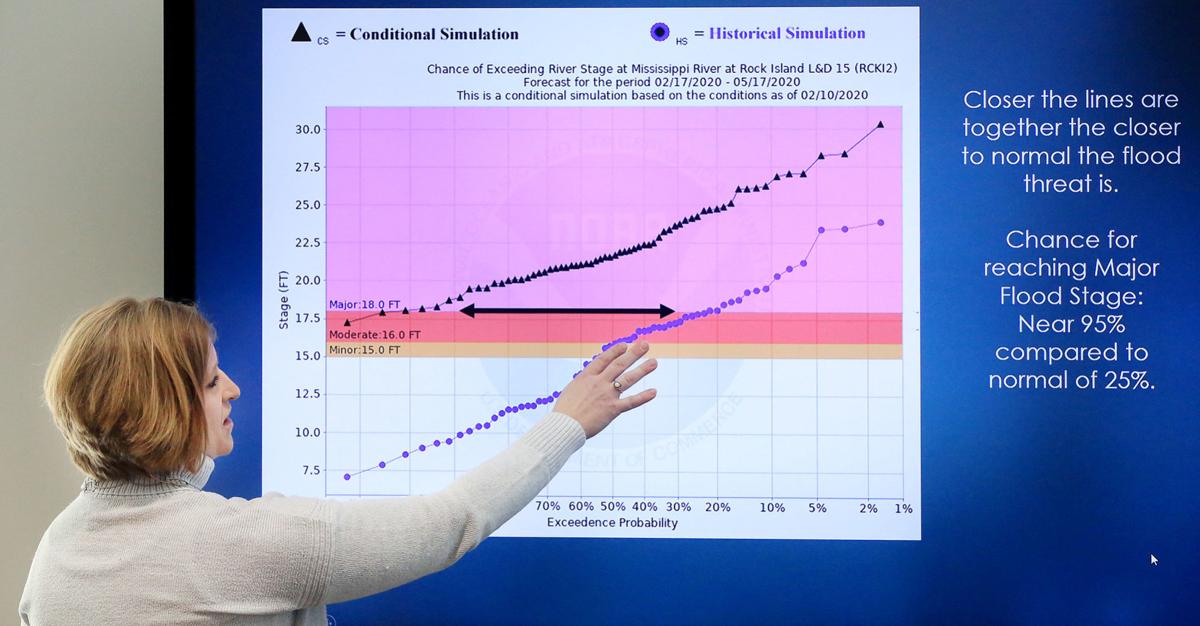 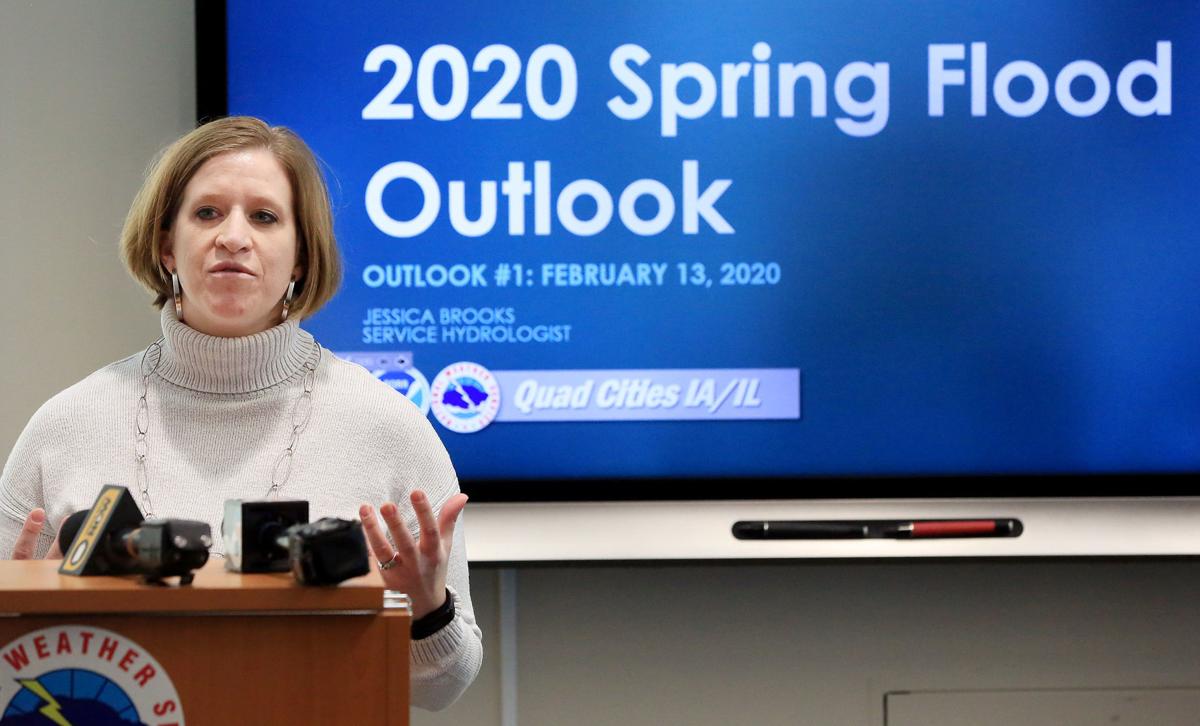 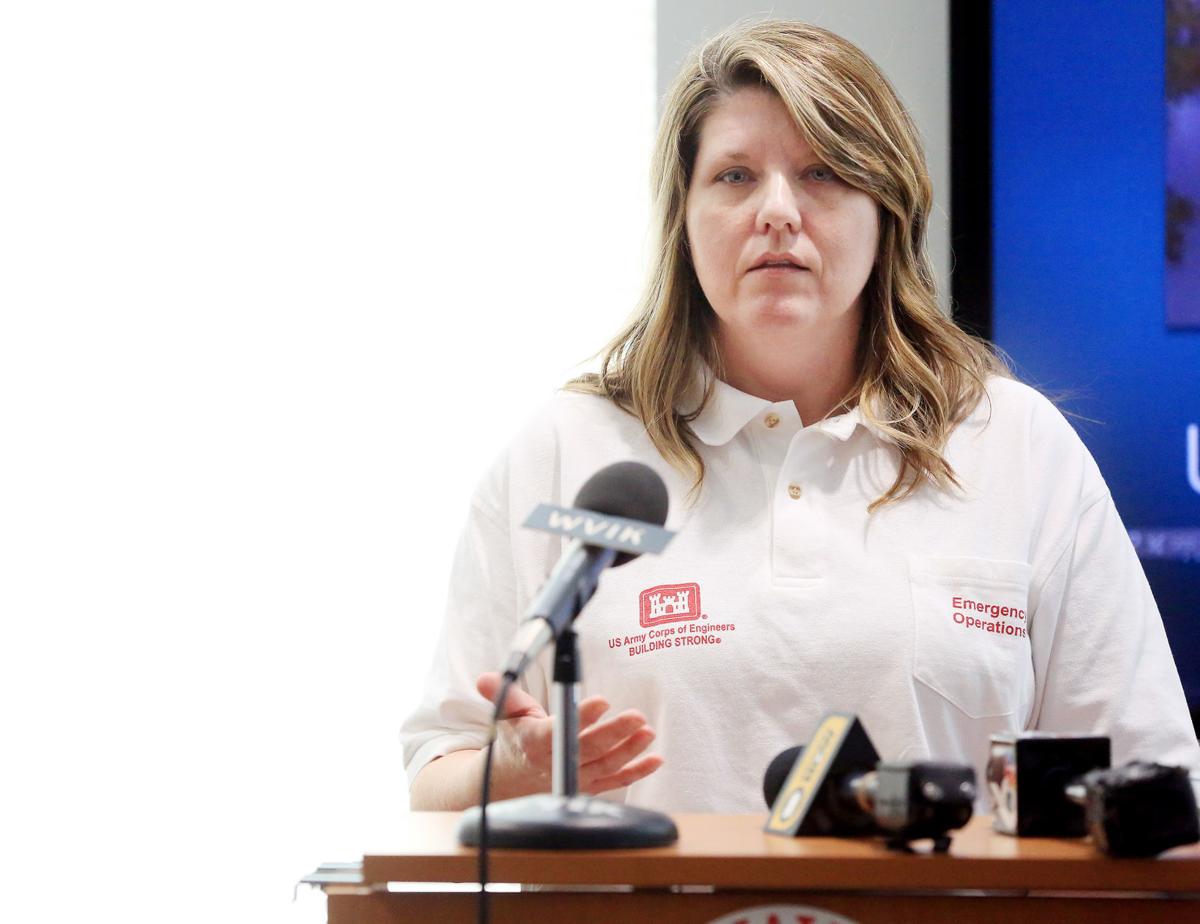 Sarah Jones, chief of emergency management for the U.S. Army Corps of Engineers (USACE), Rock Island, talks about ongoing preparations for potential spring flooding on the Mississippi River. The Corps this week helped train city workers in Davenport on the proper use and construction of its temporary levee system of HESCO barriers.

The early outlook for spring river levels on the Mississippi is showing a 95% probability of major flooding again this year.

After last year's record floods, the National Weather Service in the Quad-Cities added a third spring-outlook discussion to its typical twice-a-year-outlook schedule.

The first of such reports was released Thursday, indicating current conditions are "similar" to those that were present heading into last spring.

"We do have potential for another significant year of flooding, especially on the Mississippi River," said Jessica Brooks, service hydrologist for the NWS, Quad-Cities.

She cited several factors in assessing the likelihood the Mississippi River will again climb above its major flood stage of 18 feet: already-high river levels; substantial snow pack to the north, which has particularly high water content; the depth of the frost line, which causes precipitation to run off the ground, rather than absorb.

"The main snow pack is to the north," Brooks said. "There's a lot of water sitting up there."

Sarah Jones, chief of emergency management for the U.S. Army Corps of Engineers Rock Island District, said the agency already has taken steps to help the Quad-Cities — Davenport in particular — to prepare for another round of major flooding.

"We are closely monitoring the situation right now," Jones said.

In addition to monitoring river levels and looking "more than before" at ways to help in the next flood fight, she said, the Corps conducted training exercises this week with Davenport Public Works. The goal is to achieve the maximum benefit out of HESCO barriers, which the city uses to protect the downtown from floodwaters.

When a section of the HESCO levee failed April 30 of last year, lower downtown was inundated. As a result, the Corps evaluated the city's use of the sand-filled baskets and made specific suggestions on how to better erect and maintain the HESCOs.

The local Corps office houses a large inventory of flood-fighting equipment, she said, which happens to be staged in the Quad-Cities for flood-fighting efforts all across the nation. The arsenal includes 5 million sandbags, five miles of HESCOs and more than 100 pumps, for example.

If Davenport needs more help, Jones said, a manufacturer's representative from HESCO also will be available.

"We will be on the ground, providing assistance to the city this year," she said.

Ideally, the mild temperatures that are expected in coming weeks will help reduce the flood risk, Brooks said. If temperatures remain above freezing, conditions would improve, because the snow pack would thaw slowly. Plus, the frozen ground would run off slowly, and the ground could absorb more precipitation.

"Comparing today to a year ago, there is more snow on the ground now," Brooks said. "But February storms to the north piled more on last year. The outlook for storms are not as daunting (this year).

"Warmer weather now may be a big factor, too."

The second spring-flood outlook will be released at the end of this month, and the third will be reported on March 12. With each round of predictions, the contributing variables become more reliable in terms of accuracy in flood forecasting.

The City of Davenport has purchased excess flood insurance from the private market and has increased its federal flood insurance to the maximum in preparation for any severe flooding that may occur this spring and summer.

Davenport’s Finance Director Brandon Wright said that the excess flood insurance, purchased for $60,000, is for $1 million each the Freight House, Union Station and Modern Woodmen Park.

In order to get that much insurance from the market, the federal insurance had to be increased to the maximum of $500,000 per building. The city had not been keeping that much insurance on the buildings but given the threat of severe flooding, it made sense for the city to add more.

“It’s been a long time since we incurred substantial damage to those structures, so while we had been carrying flood insurance on them it wasn’t a lot,” Wright said.

“Since there is a high chance of flooding this year we thought we should buy more just in case,” he added. “The federal program has a $500,000 cap on each building. We purchased market excess flood insurance that would write policies above and beyond that $500,000 per building.

“The reason we were able to get the $1 million per building is because we are now carrying the full $500,000 federal insurance,” Wright said.

“We’ve been working through our brokers for several months,” he said, adding that there are many brokerages and agencies who are not writing insurance policies for the Mississippi River.

Wright said that of the three — Freight House, Union Station and Modern Woodmen Park — the ballpark is the property that is protected best against flooding, but if something happened to that flood protection the park would incur the greatest damage and costs.

The policy goes into place March 1, Wright said, “so keep your fingers crossed that we don’t have anything happen before then.”

The Quad-City region is under a Wind Chill Advisory until 8 a.m. this morning.

Sarah Jones, chief of emergency management for the U.S. Army Corps of Engineers (USACE), Rock Island, talks about ongoing preparations for potential spring flooding on the Mississippi River. The Corps this week helped train city workers in Davenport on the proper use and construction of its temporary levee system of HESCO barriers.