‘This will be distinctively Davenport’: Aldermen to vote on 'destination play area' plan for riverfront
View Comments
Share this 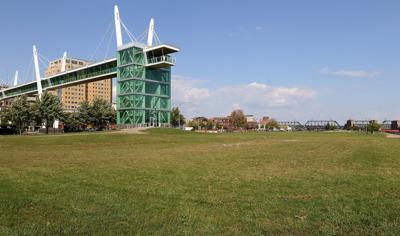 An aerial map shows the Main Street Landing area and the proposed site for the Destination Play Area.

For years there were plans. Bold proposals that capsized. Big visions that never quite caught wind.

Davenport’s Main Street Landing, a four-block stretch of riverfront property between Harrison Street and Pershing Avenue, has enticed and eluded developers for over a decade.

Progress might be near. On Wednesday, City Council will hold a milestone vote that could catalyze development at Main Street Landing.

The vote would launch a process to design a multi-million-dollar “destination play area” — a world-class outdoor playground — along two acres next to the river, a proposal city leaders hope will become a regional family attraction.

“This will be distinctively Davenport,” Alderman-at-Large Kyle Gripp, who has championed the project, told City Council last week. “This won’t be a playground you can find in 12 other cities across the country. This will be custom. This will be something that people drive from hours around to come to.”

The proposal comes at the same time Davenport begins searching for a consultant to craft its long-term flood plan.

Proponents of the destination play area think the city can “walk and chew gum at the same time,” as Alderman-at-Large J.J. Condon put it.

Some are more wary. Although the proposal is expected to pass — and construction itself remains far from a done deal — some council members are concerned the city is moving too fast to develop a flood-prone area before a long-term flood mitigation plan is hatched.

“I don’t see the urgency to put these plans together right now till the City Council, along with our great staff, can develop a plan to address the flooding,” Ward 4 Alderman Ray Ambrose told council last week. “Investing that kind of money with what we’re dealing with right now I think is reckless.”

‘We’re jumping on everything we learned’: Davenport hopes to find flood consultant within 90 days

A consensus has been reached on the urgency of hiring an outside firm.

The current proposal is the culmination of a yearlong planning effort. In March of 2019, the city established the Main Street Landing Regional Activity Task Force (now called the Destination Play Area Task Force) to recommend a final design for development.

In January, the task force approved a request for qualifications (RFQ), a document that outlines steps for the city to hold a design competition for the proposed play area. That’s the document City Council will vote to approve Wednesday.

The proposed RFQ has two phases. First, the Task Force — which includes representatives from City Council, Davenport Community School District, the Riverfront Improvement Commission, and Parks and Recreation Advisory Board, among others — would evaluate submissions from consultant teams interested in designing the play area.

Three finalists will advance to a design competition, in which they'll be paid $20,000 each to submit constructable plans. The process will incorporate feedback and revisions so the city can “build in the stuff we want” into the final design, Gripp said. The winning team will develop their idea into a contract with the city, with the goal of breaking ground in Spring 2022.

The project has been moored by four guiding principles: universality, to create a "special place that transcends cultures, ethnicity, income level, gender" and other factors; uniquely Davenport; a broad appeal to become "THE regional destination for recreational use"; and a resilient design that can withstand flooding. An “integrated flood resilient design” is the first of 10 design elements listed.

“As I’ve had the opportunity to travel this great country of ours, I’ve never seen a playground that has a railroad track going through it with hundreds of tanker cars,” Ambrose said. “A downtown playground by the railroad tracks seems a little risky to me.”

In response, Gripp points to Maggie Daley Park in downtown Chicago, a popular attraction next to Millennium Park and Lake Michigan. Despite backing the heavily trafficked Lake Shore Drive, the park’s sprawling children’s playground is relatively safe and quiet.

The design for Davenport’s destination play area will account for safety concerns by putting entrances and exits away from the railroad tracks and making it relatively difficult for children to escape, Gripp said.

“Through context-sensitive design, special attention shall be given to secure trackage from potential trespassing children and provide built-in noise mitigation to protect the site from blaring horns,” the RFQ states.

The RFQ was approved unanimously by Davenport’s Riverfront Improvement Commission in January. The city has accounted for roughly $3.5 million to construct the site, though more funding might become available through grants or public-private partnerships.

According to a proposed timeline, finalists will be announced around April, and the design competition winner will be selected around August.

For its proponents, Wednesday’s vote is the crucial next step of a long-term project to enrich the community’s most valuable amenity: its river.

“We can have a great riverfront with a great park, and we can protect our infrastructure."

We asked Davenport leaders your questions about flooding. Here are their answers.

What is Davenport’s plan for a downtown flood this year?

An aerial map shows the Main Street Landing area and the proposed site for the Destination Play Area.