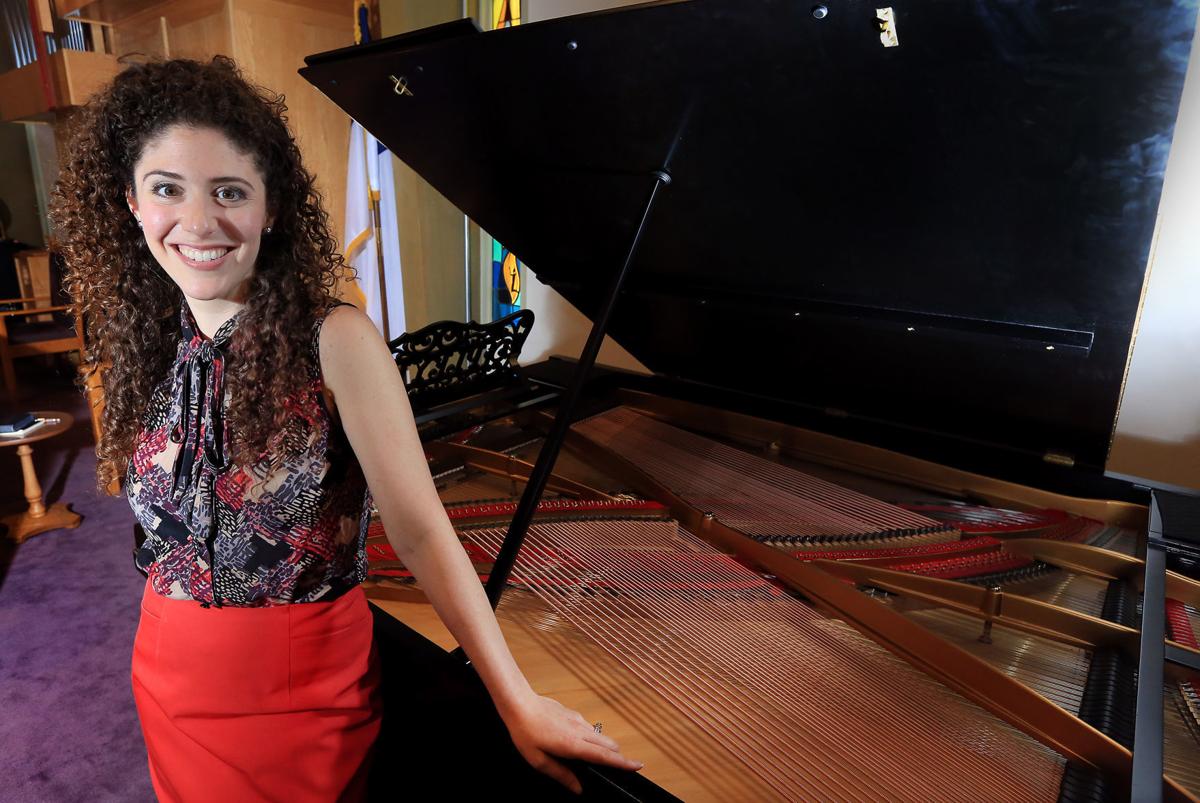 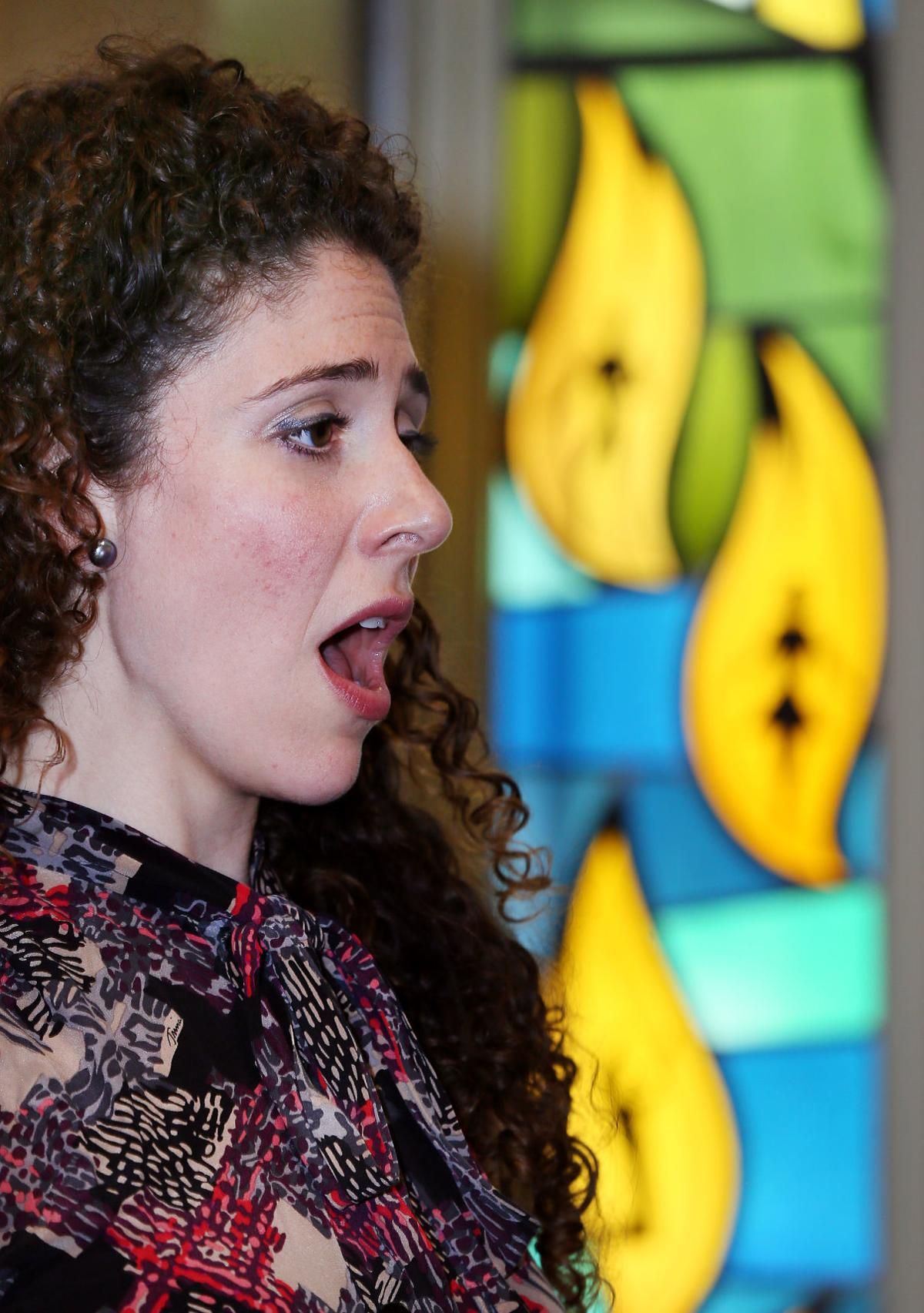 Lily Arbisser, a New York City-based soprano and Davenport native who recently won the Young Artist Competition sponsored by the National Federation of Music Clubs, practices Monday, Aug. 26, at Asbury United Methodist Church, Bettendorf, where she will perform on Friday.

BETTENDORF — Over a two-month span this year, soprano and Davenport native Lily Arbisser made her Carnegie Hall debut and won first prize in a prestigious national competition for young artists.

But a Friday benefit concert at Asbury United Methodist Church — featuring St. Ambrose University pianist Marian Lee on the church's rare 1904 double-grand piano — may be the most meaningful gig the accomplished 32-year-old Davenport Central grad will do all year.

“We're looking at some of the greatest French and Spanish composers of the 20th century,” Arbisser, who wrote notes for the program, said Monday.

Marilyn Mitchem, who served as Arbisser's piano teacher for 12 years, is a member of the church, and she invited Arbisser to perform there. Mitchem also oversaw the long-planned restoration of the Pleyel double-grand — the only one in a playable condition that people can perform on in the Western Hemisphere.

Its original owner, Marguerite de Saint-Marceaux, was the grand dame of the Parisian salon movement, and among her famous guests were composers Claude Debussy, Gabriel Faure, Frederick Delius, Giacomo Puccini, Francis Poulenc and Maurice Ravel. Mitchem gave Arbisser a list of some of the pieces that were premiered at Marguerite's three-story apartment, which she'll sing Friday.

“She was kind of the Simon Cowell of Paris,” Mitchem said. “This the first vocal recital we've had on the Pleyel. Marguerite hosted singers, composers, sculptors, painters — a who's who of Paris. She was a fabulously wealthy woman. Composers would come and try out their new compositions in a friendly atmosphere before presenting them to the larger world.”

“I didn't know what a huge influence she was,” Arbisser said. “It's remarkable how single individuals can touch so many lives. If you think of her impact, it's probably not quantifiable, but it's exciting.”

While at Chicago's Ravinia Festival for a recent three-week fellowship, Arbisser spoke to a pre-eminent vocal accompanist and historian, Graham Johnson, about the Pleyel, and “he was gobsmacked,” she said. “He said, 'That's amazing.'”

Debussy's opera “Pelleas et Melisande” was first heard at Marguerite’s salon in 1894 and then again in April 1902, five days before its world premiere on stage. Arbisser also will do Debussy's vocal setting of the Paul Verlaine poem “Clair de Lune,” written in 1882; the classic piano piece of the same name was penned by the French composer in 1890.

Lee — an associate professor of music at St. Ambrose — will play the Debussy 1904 showpiece “L’isle Joyeuse,” which was first heard Jan. 13, 1905, at Marguerite’s salon, performed by Catalan pianist Ricardo Vines. Mitchem said the composer didn't perform it himself since Marguerite had set up Debussy in 1894 with a woman he hoped to marry, and she dumped him, causing him never to return to the salon.

Mitchem, who taught Arbisser piano from kindergarten through her 2004 high school graduation, called her “the most advanced and amazing student I had in 50 years of teaching.” In second grade, she decided to learn George Gershwin's daunting, thrilling “Rhapsody in Blue,” which she played from memory at age 17 with the Quad City Wind Ensemble.

“Every technical problem, and there are numerous ones, she mastered one by one,” Mitchem recalled. “It was amazing. That is a big piece; I was so proud, it was the furthest any of my students got. To stick with a piece two years, it was amazing to see, to work on that, see her fulfill a dream she had since second grade.

“She's such a focused, tenacious person,” Mitchem said, noting she's kept in touch with Arbisser ever since, encouraging her to apply for the 2019 National Federation of Music Clubs' Young Artist Competition, at their June national conference in Jacksonville, Fla. There are categories for men's and women's voice, piano and string performer. Arbisser won a $20,000 top prize, which comes with two years of bookings.

To apply, she submitted 30 minutes of live video and prepared 100 minutes of memorized music in a wide variety of genres and languages. Judges selected pieces from that list for her to perform.

“It's very exciting after you work that hard at something,” Arbisser said of winning. “Getting to represent Iowa was super wonderful. Iowa's just a wonderful place to be from — you feel so supported. You have family everywhere you go, whenever you meet an Iowan.”

Earlier this year, she was a semi-finalist in the international Kurt Weill Foundation’s Lotte Lenya Competition, and made her debut at Weill Recital Hall at Carnegie Hall as a soloist in Riyoichi Saito’s chamber opera “Dojoji.”

On the same level as the main hall, Stern Auditorium, Weill Recital Hall is a 268-seat jewel-box venue. “It's like an Italianate, 18th-century hall with crystal chandeliers,” Arbisser said. “It was a great experience.”

“I was seriously pursuing both of them together during high school,” she said of voice and piano. “By the time I went to college, I had the sense that piano wasn't going to be the professional path for me, and voice was something I was more understanding of how to develop that long-term. The voice was where my heart was for a career.”

In addition to operatic roles in New York City and upstate, Arbisser is a frequent concert soloist with choral groups in and around New York City, most recently in Beethoven’s Symphony No. 9 and Vaughan Williams’ “Serenade to Music,” both with Princeton Pro Musica. She joins them again in March 2020 as the soloist in James Whitbourn’s “Annelies,” a 2005 cantata set to text from Anne Frank’s diary.

The last time Arbisser sang in the Quad-Cities was a 2012 concert at Augustana's Wallenberg Hall, with a cellist who also graduated from Central.

“This is just going to be a dream come true for me,” Mitchem said of Friday's program.

“The amazing Iowa education system, and having private instructors like Marilyn, to have that as the foundation of my education, has taken me places I could never have imagined,” Arbisser said.

All donations at this event will go to the Quad-Cities Red Cross chapter for local flood relief. It's also special since this is the first time Arbisser's husband, Adam Shorr, an attorney, will visit the Quad-Cities. They have been married for a year.

They also host musical salons at their home in Jackson Heights, in Queens, N.Y. For more information, visit lilyarbisser.com.

Tickets: Donations encouraged to the Quad-Cities chapter of the American Red Cross for local flood victims.

Michael Kim and Kyung Kim are pianists who make beautiful music together.

Sunday's worship at Asbury United Methodist Church in Bettendorf was historic in more ways than one. A recently restored, rare 1904 double-gra…

BETTENDORF — A rare 1904 double-grand piano will be showcased in a free concert at 7:30 p.m. Saturday at Asbury United Methodist Church, 1809 …

Lily Arbisser, a New York City-based soprano and Davenport native who recently won the Young Artist Competition sponsored by the National Federation of Music Clubs, practices Monday, Aug. 26, at Asbury United Methodist Church, Bettendorf, where she will perform on Friday.