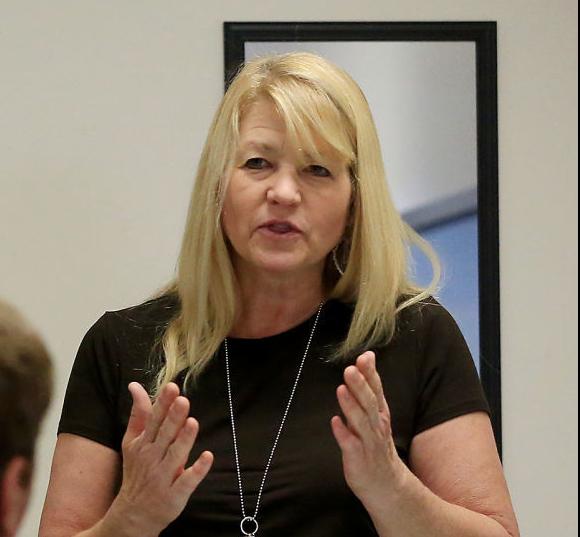 Tracy Wyant speaks to a class of Sherrard seniors about being organ donors Friday, November 15, 2019. Her daughter Sara died Oct. 31, 2003 in an accident on the way to school at Sherrard High School. 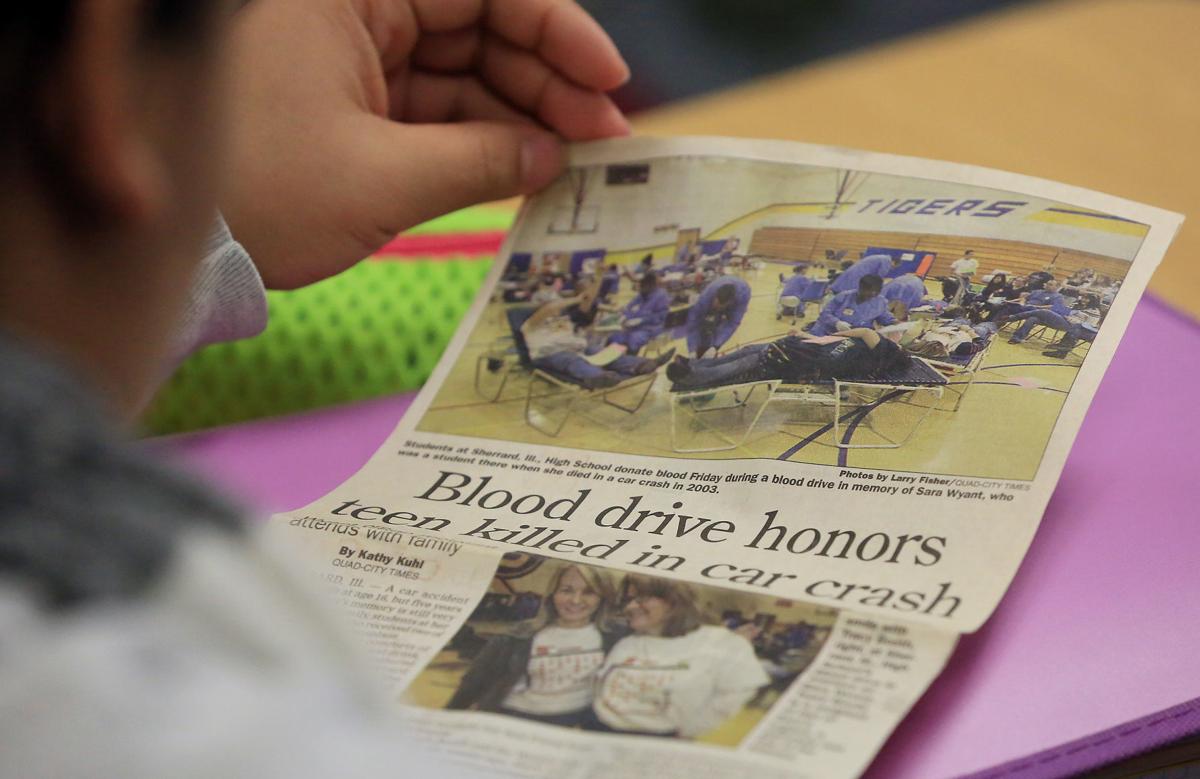 Students in Tammy Crippen's class look at a newspaper article about Tracy Wyant meeting Tracy Booth of Murray, Iowa in November of 2008 during a blood drive at Sherrard High School. Booth received a pancreas and a kidney from Wyant's daughter Sara after she was killed in and accident Oct. 31, 2003. Two other individuals also received Sara's organs. 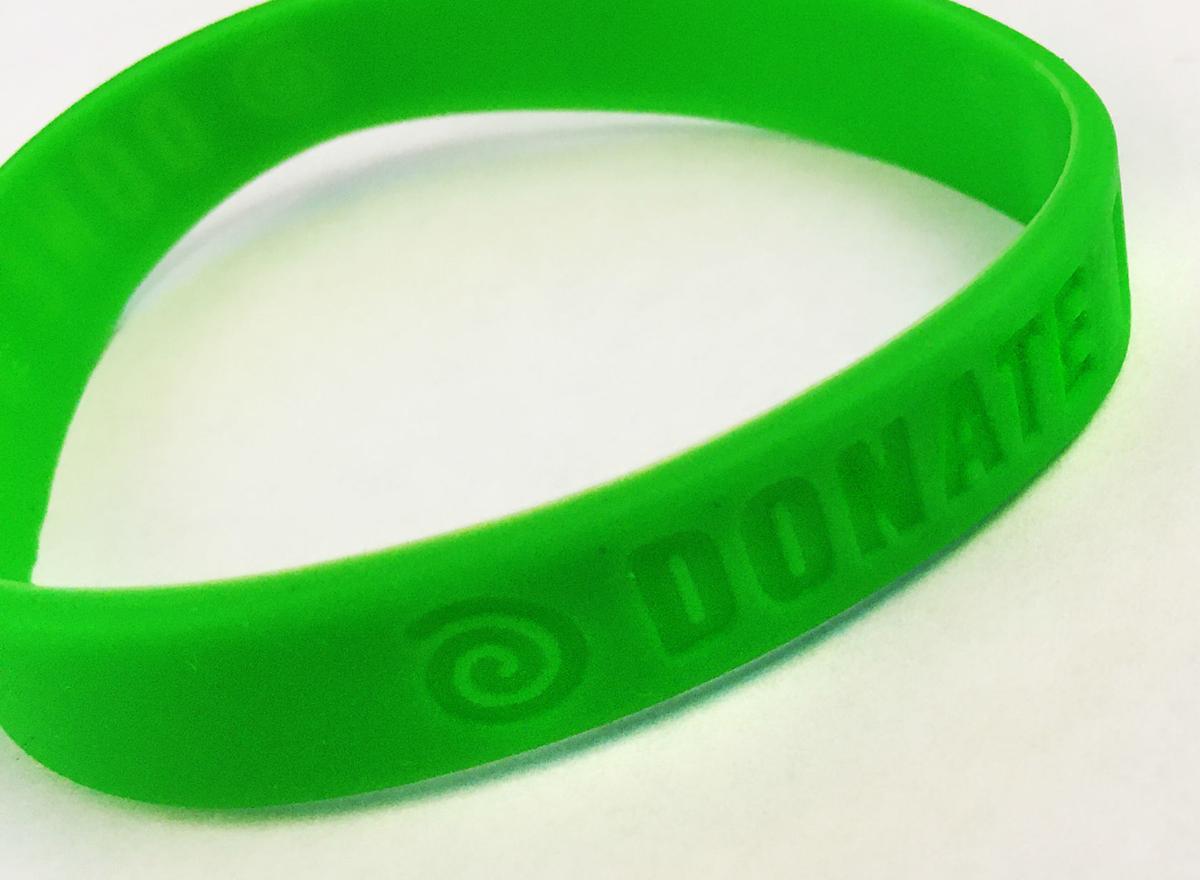 Tracy Wyant passed out green wrist bands saying "@DONATE LIFE" after speaking to a class of Sherrard seniors about being organ donors Friday, November 15, 2019. Her daughter Sara died Oct. 31, 2003 in an accident on the way to school at Sherrard High School.

It was May 2003 and the Sherrard sophomore had just gotten her driver's license. Right away she signed the back of the card to be an organ donor and promptly told her parents about her decision. It was a selfless act that she couldn't possibly know would have life-changing consequences five months later.

She spoke about and for her daughter, to seniors in Tammy Crippen’s English class at Sherrard High School on Oct. 15. She told the wide-eyed class about the journey her daughter took to become an organ donor and the unexpected accident that made that decision a reality far sooner than anyone expected.

It happened early on Monday, Oct. 27, a clear, crisp, fall morning as she was setting out for school. With her, an assignment for English class, a persuasive speech in favor of organ donation. She had practiced the speech with Crippen - but she never got to deliver it to her classmates. In the end, her choice to be a donor spoke louder than any speech ever could.

“I didn’t get my miracle, but I could give my miracle to someone else. I could answer someone else’s prayers, I could do that as one of the people responsible for her,” Wyant said to the class.

She told the students she and her daughter had a close relationship. Wyant remembers riding horses with her daughter and enjoying the outdoors one day the previous summer when she brought up a serious topic. They were talking about a show that told the story of a woman who had been on life support for 20+ years, “she said, “What would you want us to do?”

They both agreed if nothing else could be done, they would want a family to let go and, “pull the plug.”

“It’s ironic we had conversations like that… It’s unimaginable. That’s not something you have in your vocabulary when you’re talking about your kids.”

By Thursday her brain could no longer regulate the temperature of her body - a first sign that she wouldn’t be coming home, according to Wyant.

“The doctors came and asked, ‘What about organ donation?’ Immediately, my thoughts went back to that conversation… ‘yeah she definitely wanted that.’”

Older brother Casey, 19 at the time, agreed with the decision, according to Wyant. “He said, ‘If this is what she wanted, this is what we really need to respect.’

Sara’s dad, Rob, was unsure which organs he was comfortable donating.

She said the process was much more overwhelming than they expected.

“We thought it was going to be about signing a paper and saying ‘goodbye.’”

Wyant explained the patient has to be clinically brain dead. She told the students the experience was surreal, to go from praying all week that the shunt they placed would drain the fluid from her brain - to praying that her brain would expand, once the shunt was shut off, so her organs could successfully be donated, “You go from praying one thing to the complete opposite.”

Representatives from The Donor Network took the family into a conference room and went over a long list of possible organ donations.

She said based on the condition of Sara’s organs, they were limited on what could be donated. They finally came to a decision, “After a lot of heartache and anguish and talking to doctors and family.”

By 11 p.m. that night they found matches for her kidneys, liver, and pancreas. They were donated to three people, men aged 42 and 57, and a woman, 34.

The Wyant’s were able to connect with the 34-year-old woman - also named Tracy. The similarities between her and Sara were an affirmation for the family. They both loved animals, horses in particular, and spent a lot of time in nature.

The recipient, Tracy, received Sara’s pancreas and a kidney. She had been diabetic since age 10 and went into renal failure at 32.

“She had to quit her job - one of her letters said she wasn’t allowed to go into the lot where cows were if she tripped and fell she could be trampled or hurt… Her life was very limited.” Wyant was excited to hear the other Tracy’s body started working with her new kidney right away.

“Our gift of life to her meant she could actually live again, she didn’t have to worry the next day she would go into complete failure,” said Wyant.

Sara's classmates back in Sherrard had taken letters and cards for the family while they waited for her condition to improve or worsen. The support, Wyant said, was encouraging.

The students decided to name the fall school American Red Cross blood drive in her honor — that same week.

“That was such a huge honor. One thing that makes you the saddest is (the thought) - they’ll be forgotten,” said Wyant. The Sara Wyant Memorial Blood Drive just concluded its 16th year at Sherrard high school on Nov. 1.

Crippen invited Wyant as part of her ‘Friday Feature’ for her senior students to learn life skills.

She said the purpose of bringing in various speakers is to, “Help them not just be academically prepared, but socially and emotionally prepared as well.”

“Every time a speaker is done, I just feel a little bit better, because I can do a lot of things academically - but once they’re out of here... I can’t do anything. I feel like I’ve given them the resources to make their life better in the future,” said Crippen.

Crippen said she always talks about Sara and her memory. Her own sister, Danette Stone, chose to become an organ donor because of Sara’s story shared by Crippen, just days before she unexpectedly passed away.

“That message she gave today is going with the kids outside of these walls, and that’s all you can ever ask,” she said.

Crippen described Sara as a “free-spirited old soul - who always spoke her mind...”, and a “hippie.”

“It was so funny, she liked to take her shoes off in my class,” said Crippen, fondly remembering Sara. She keeps her picture up in her classroom - and other tokens to keep her memory alive.

Sherrard senior Payton Hutchins said her message was, “powerful”, and he’s interested in becoming an organ donor. Especially on the heels of a classmate and teammate Alyn Hall’s untimely death last year. “That’s something you don’t prepare for and you don’t expect to ever.”

Wyant’s message to the seniors is simple. Make an informed decision and tell someone. Illinois residents can register to be an organ donor at https://www.lifegoeson.com, in Iowa go to https://www.iowadonornetwork.org.

“In my mind, when you’re dead - your body is not going to help anybody in the ground, might as well donate the things you can... Somewhere along the way, you may know somebody who passes away and could be an organ donor. If that happens you’ll be a little bit more prepared/educated about what that means,” Wyant said.

She told students not to worry about bringing up a person who's died to their loved ones, “It’s enough to say ‘I don’t know what to say, but I’m thinking about you.’”

Wyant and her husband make it their mission to attend visitations for young people and to be there for the surviving families. Her message to them, “It sucks, but you will be happy again, you will be okay, you’ll make it. But you just have to continue on.”

The Quad-City region is under a National Weather Service dense fog advisory until 9 a.m.

Tracy Wyant speaks to a class of Sherrard seniors about being organ donors Friday, November 15, 2019. Her daughter Sara died Oct. 31, 2003 in an accident on the way to school at Sherrard High School.

Students in Tammy Crippen's class look at a newspaper article about Tracy Wyant meeting Tracy Booth of Murray, Iowa in November of 2008 during a blood drive at Sherrard High School. Booth received a pancreas and a kidney from Wyant's daughter Sara after she was killed in and accident Oct. 31, 2003. Two other individuals also received Sara's organs.

Tracy Wyant passed out green wrist bands saying "@DONATE LIFE" after speaking to a class of Sherrard seniors about being organ donors Friday, November 15, 2019. Her daughter Sara died Oct. 31, 2003 in an accident on the way to school at Sherrard High School.