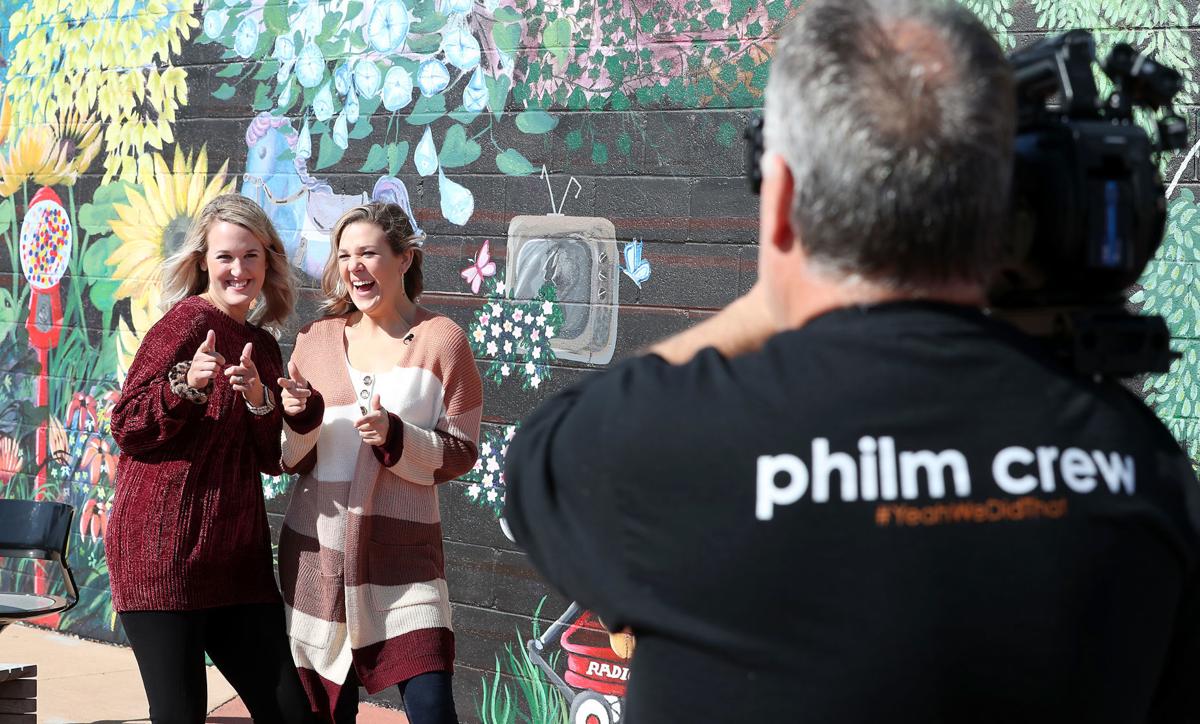 Sisters Lauren Corwin and Haley Walker do their signature phrase, "Let's check it out!," while working with Rock Island-based dphilms on a series of web videos to promote Rock Island. They're standing next to Fred & Ethel's antique store on 14th Avenue. 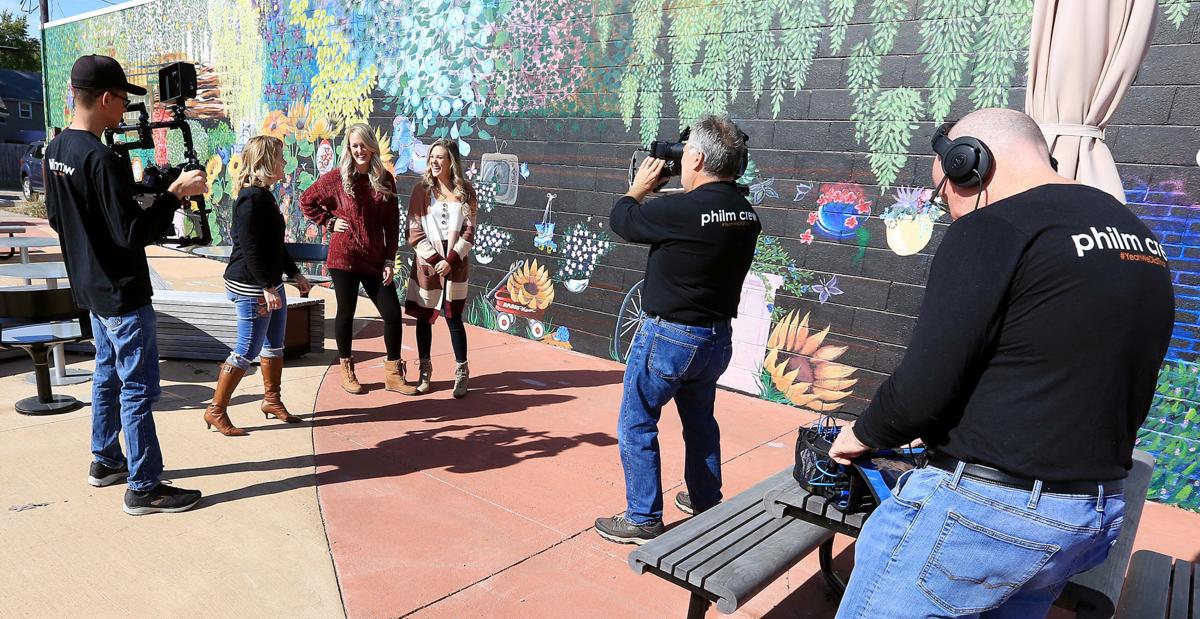 Brick & Mortor Boutique co-owners and Sisters Lauren Corwin and Haley Walker, center work with Rock Island-based dphilms on the next episode of a new web video series to promote Rock Island next to Fred & Ethel's on 14th Ave., Friday, October 18, 2019.

The series of eight episodes, each about eight minutes or shorter, was shot and edited by Rock Island-based dphilms and commissioned by the Development Association of Rock Island (DARI). The blond, enthusiastic 20-something sisters — Corwin is 28, and Walker is 24 — are Rock Island natives who last year opened a clothing business, Brick & Motor Boutique.

They were selected to be co-hosts of the videos through an online voting contest. Members of the public also were asked to submit suggestions for people, places, and things in Rock Island to be featured in the videos.

The episodes were filmed from late July to mid-October, and they are being released one at a time at 6 p.m. Wednesdays on the DARI Facebook page.

The first two videos have garnered over 25,000 total views so far.

“They're fabulous,” dphilms executive producer Jennifer Verscha said of Corwin and Walker. “They're so excited and full of energy. It's great to be around them and see how they interact with others. They're just very passionate and outgoing. They're very genuine, very natural — easy to talk to and get along with.”

“They grew up here, went to high school here, went away to college, and came back here and started their own business,” she said.

“We want to showcase people, places and pride that make our city what it is,” Verscha said. “Some things we feature people already know about and frequent, but others may be new to people, that they'll venture out and find something new to do.”

“We have gotten some really good feedback from people who are watching it,” she said. “They want to see more of Rock Island, and obviously, there are so many places that we haven't featured, and you can't get them all in eight episodes.”

A couple of the lesser-known places featured in the videos were Pee Wee's Cajun and Louisiana-style restaurant at 2035 9th St., and Karpeles Library Manuscript Museum, which has been open since 2012 at 700 22nd St., in the imposing former Christian Science Church.

“It's one of those things you drive past and go, 'What is in that place?' " Verscha said of the museum. The Karpeles Manuscript Library is the world's largest private collection of important original manuscripts and documents, which are housed in several museums across the country.

“The Karpeles Museum we didn't know about,” Corwin said recently. “We thought you'd have to go to Chicago to access things like that.”

Corwin majored in finance and Walker in advertising/marketing. Corwin worked for Von Maur corporate for five years, and Walker worked for a website development company.

Walker planned their boutique while she was still in college, and she quit her job before Corwin did to start Brick & Motor.

It began as a mobile women's clothing store and website for younger women. They opened a storefront in November 2018 at 1700 2nd Ave. in Rock Island. The original plan was for that store to operate only through the winter, but it turned into a permanent location for the business.

“It was just supposed to be a winter storefront for us, but it did really well. People liked having that, and a place to try on clothes,” Walker said.

“We're kind of all over the place,” Corwin said, including Tipton, Iowa, and Chicago. Her husband, Tim, teaches math and statistics at Rock Island High School.

The sisters jumped at the chance to volunteer their time to star in the Rock Island videos. “It was an awesome opportunity to our get our name out there and showcase Rock Island,” Corwin said.

“We learned so many things about Rock Island and different local businesses we had no idea, and we've lived here our entire lives,” Walker said. “It was awesome.”

Especially awesome was the mouthwatering spread of dishes prepared for them at QC Coffee and Pancake House downtown, they said. “He went all out,” they both said of owner Jose Zepeda, who showed off the restaurant's recent expansion.

Chatting about other places featured in the videos, Walker said, "We literally go to Theo's two or three times a week.” The popular coffee shop at 213 17th St. is celebrating its 25 anniversary this year. They also admire the owner of Cool Beanz, 1325 30th St., an Augustana grad who wrote her business plan in college. “She does pop-ups with us, too,” Corwin said.

She pointed to the mural and pocket park outside Fred & Ethel's antique store, across from Cool Beanz, as an example of how Rock Island has improved in recent years. The quirky shop, which has customers worldwide, is featured in one of the videos.

Corwin said a girl she went to high school contacted her recently to say she's moving back from Madison, Wis., and to congratulate her on the videos. “It makes me more excited to see this,” her friend said. “That's awesome.”

“It's funny 'cause people say, 'There's nothing to do around here; I can't wait to move out of Rock Island,' " Corwin said. Instead, the videos show "there's so many unique things you can only do here,” she added.

Verscha said the series is aimed at residents and non-residents alike. “It's to showcase our pride in Rock Island, so residents see things they haven't seen before, but also to show outsiders, 'Here are some cool things we have to offer in our community.' "

The production company dphilms has been at 2227 3rd Ave. in Rock Island since 2003 and has worked with all of the major cities in the area, especially doing other projects with DARI. “It's been great for us to partner with the Development Association,” Verscha said. “It's been great to be a business in Rock Island, so it's good to give back and show others.”

"dphilms has been a phenomenal partner," said Beth Payne, DARI's administration director, noting the videos are an ideal way to champion the community and raise awareness.

Everyone involved in creating the videos would like to do a second series. “There's so much in Rock Island, so there's so much more we could showcase,” Walker said.

Traffic alert: Moline firefighters are battling a fire this morning at a vacant building at 5th Avenue and 10th Street. Drivers should take al…

ROCK ISLAND — Two Rock Island sisters have been tabbed to be the hosts of a new social media video series, “Rock Island Forward,” produced by …

Sisters Lauren Corwin and Haley Walker do their signature phrase, "Let's check it out!," while working with Rock Island-based dphilms on a series of web videos to promote Rock Island. They're standing next to Fred & Ethel's antique store on 14th Avenue.

Brick & Mortor Boutique co-owners and Sisters Lauren Corwin and Haley Walker, center work with Rock Island-based dphilms on the next episode of a new web video series to promote Rock Island next to Fred & Ethel's on 14th Ave., Friday, October 18, 2019.