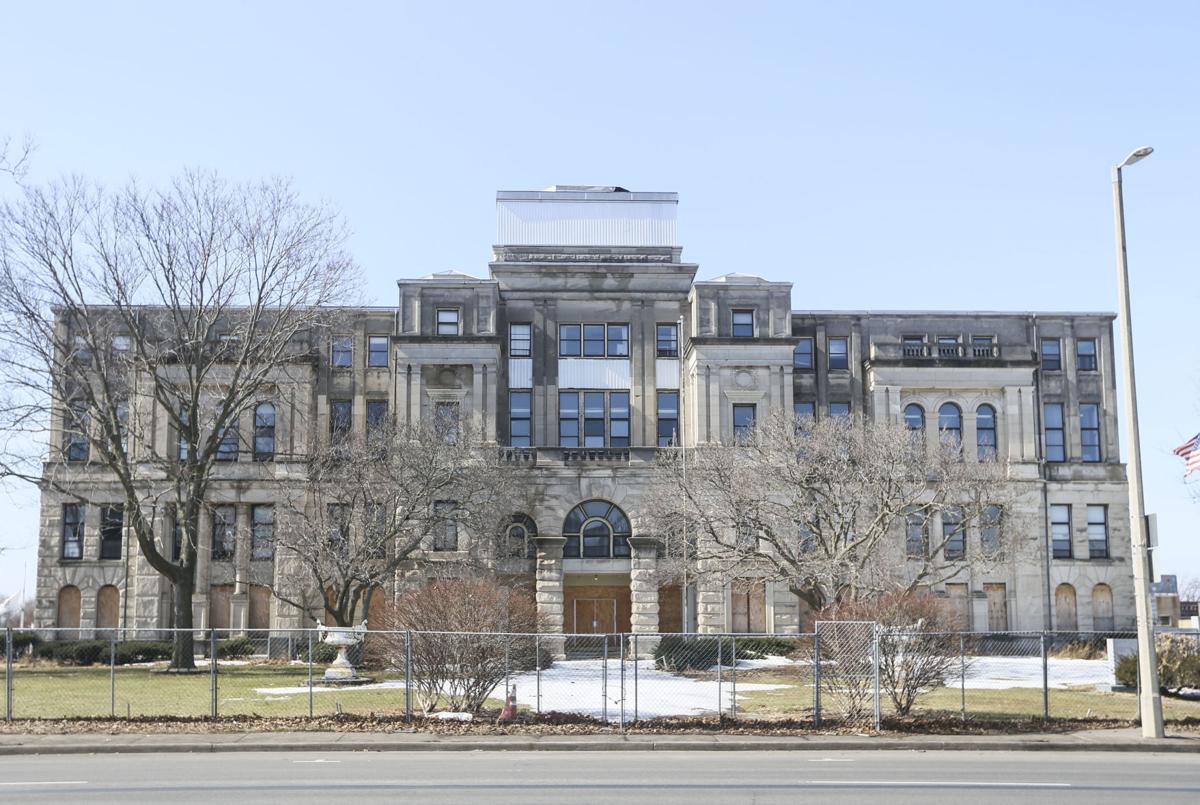 The old Rock Island County Courthouse in Rock Island could have a new lease on life as a government representative will be allowed to tour the building to examine possibly using it as a federal district courthouse. 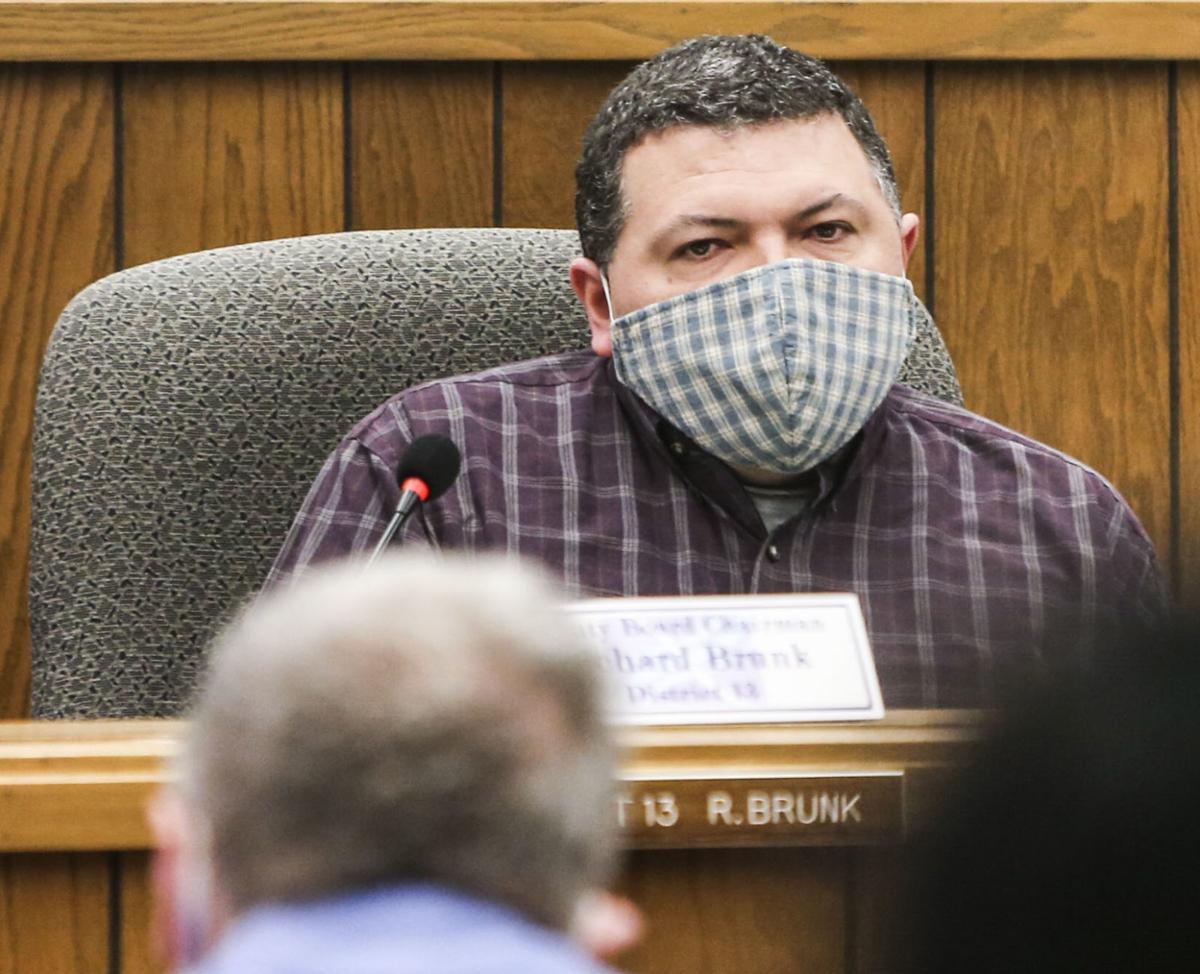 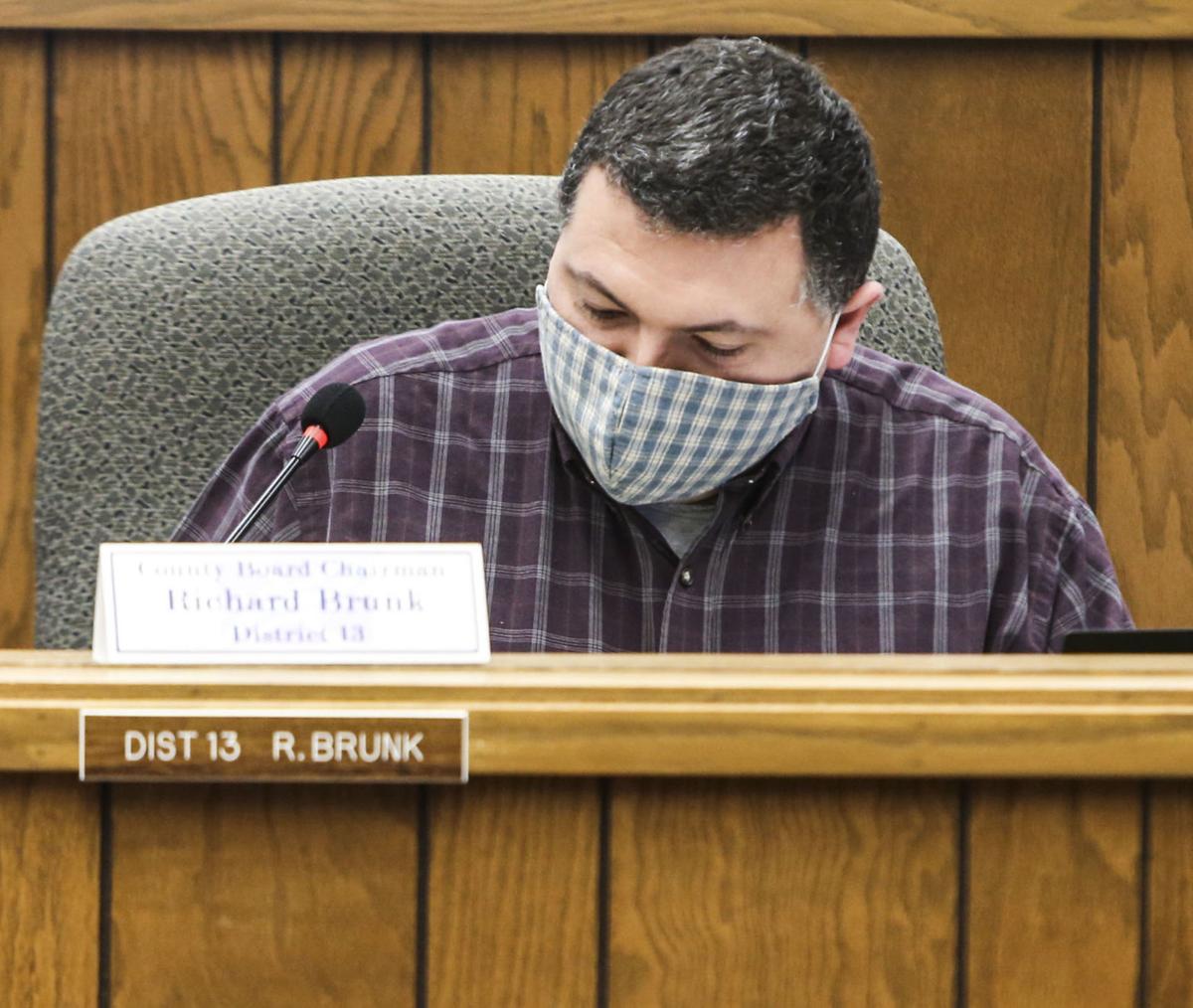 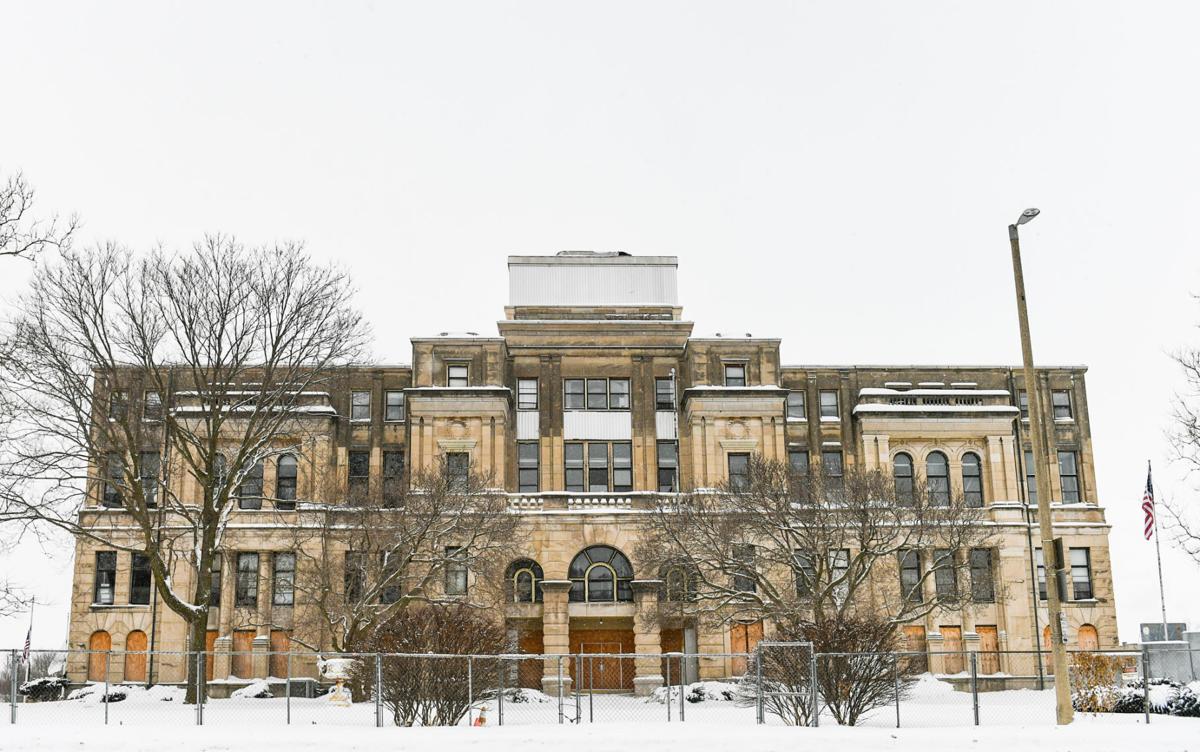 The old Rock Island County courthouse in Rock Island. A representative with the General Services Administration has asked for a live video tour of the courthouse. 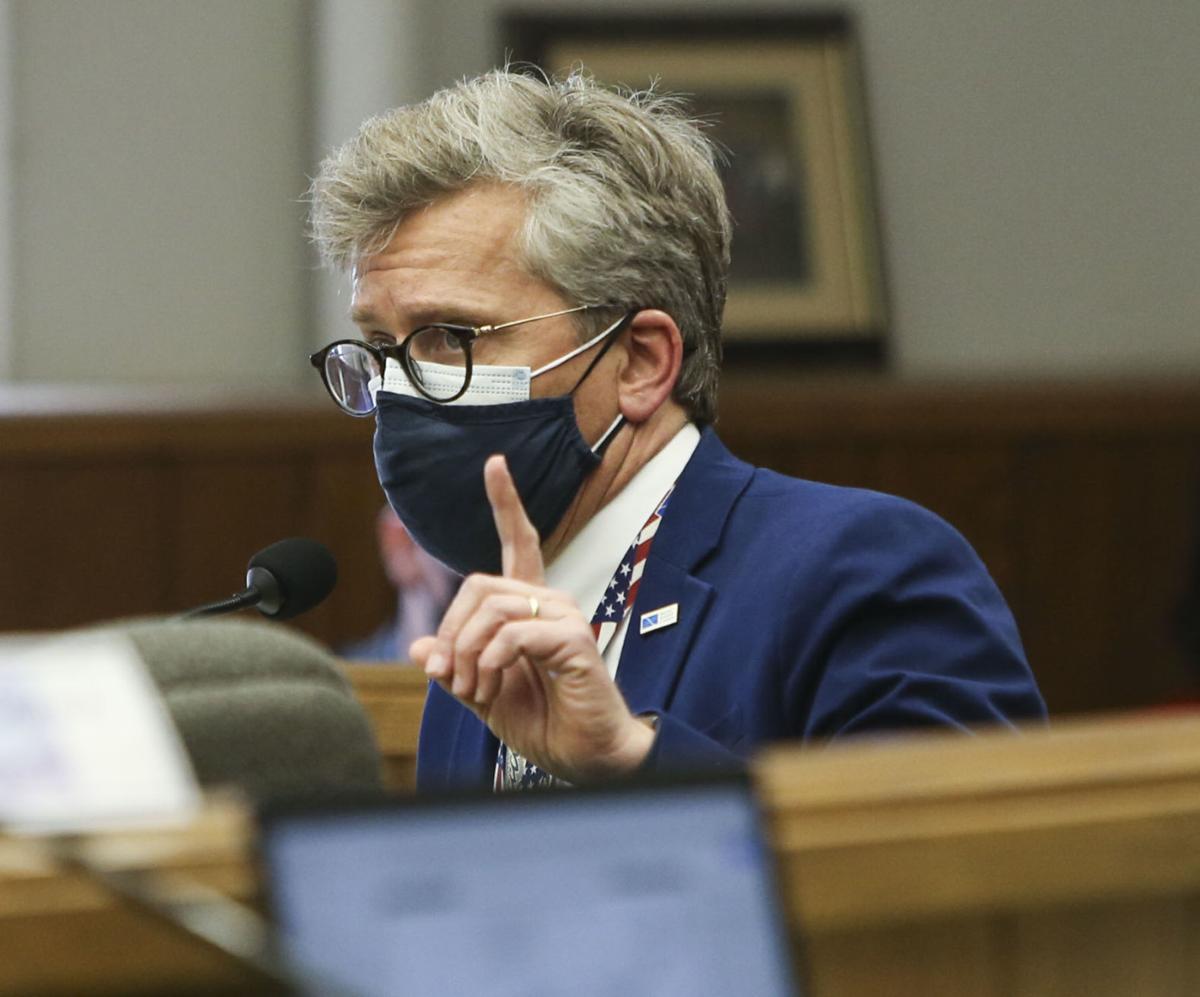 Board member Kai Swanson, speaks during a county board special meeting at the Rock Island County office building, Monday, March 22, 2021. 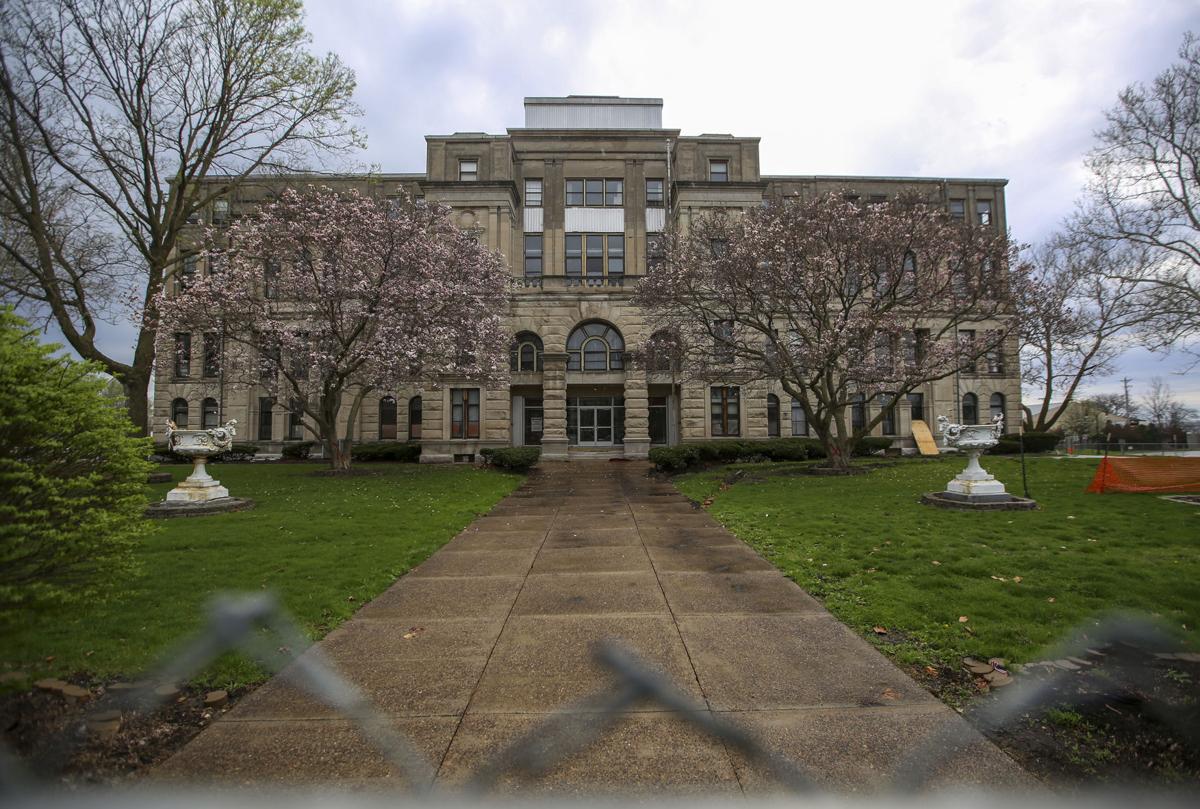 The old Rock Island County courthouse will not be sold to Joe Lemon.

County board members voted against selling the historic building during a special meeting Monday afternoon, following a 50-minute-long closed session. All board members were present.

Lemon had until 4:30 p.m. Monday to turn in a signed purchase agreement to the General Services Administration (GSA) showing he had ownership of the building in order for it to be considered for redevelopment as the new federal courthouse for the Central District of Illinois.

The courthouse is located in Board Member Lauren Boswell-Loftin's district.

"We know several of us want to demolish the courthouse and several of us want to maintain it," Boswell-Loftin said. "You will never get every (question) answered in a document of this sort. There is time to negotiate as we move forward. We could have done this had we agreed a year ago, but that didn't happen.

"But we have an opportunity right now to make a difference with that courthouse. I think we should move forward with it."

Some board members had complained Lemon's proposal was too vague and left the county open to liability. If the GSA had not chosen the old courthouse to be the next federal courthouse, board members were concerned Lemon would not sell the building back to the county, despite there being language in the contract stating the county would have had first right of refusal.

According to the purchase agreement, Lemon offered $250,000 for the four-story building and would have paid a $125,000 performance bond to the county.

The county would have retained ownership of the 1.7 acres the courthouse sits on, which Lemon would have leased from the county for 99 years, at $1 for the first 20 years — the length of time the GSA was seeking in its lease proposal for the courthouse.

Lemon addressed board members prior to the vote and said he would include their input on design decisions and that he would be open to other negotiations of the contract.

"My interest in this is only for the benefit of the community," he said.

During public comments, Jim Russell, President and CEO of Russell Construction, said he would have appreciated the opportunity to offer the courthouse to the GSA for development.

Lemon is the only developer who submitted the courthouse to the GSA for consideration.

Bridget Ehrmann, who is one of the litigants in the lawsuit against the county to save the courthouse, said Lemon has put $100,000 of his own money and hundreds of hours into his application with the GSA in an attempt to turn it into a federal courthouse.

"This is the only option. If the GSA doesn't choose this, it's going to be torn down," Ehrmann said. "This (purchase agreement) would allow the litigation to be stopped and save the county money."

Former Illinois Supreme Court Justice Tom Kilbride, who has stepped up as a courthouse advocate in recent weeks, said he was speaking out as a private citizen.

"I'm here as a volunteer; I'm not representing anyone else," Kilbride said. "I have come to the conclusion that the Joe Lemon proposal is viable, is fair, is reasonable. If the county were to approve his option today, that would not be the end of the deal. The GSA would still review this project further and there would still be an opportunity for the county to negotiate additional contingencies."

"While the option agreement with Mr. Lemon is not perfect and we have several concerns — which we have discussed — I find myself very frustrated that we are not in a position to go back and negotiate. The vote on this option is very difficult because it is deeply flawed. I object to the point that we are not engaging in further negotiations."

Maranda said County Administrator Jim Snider and State's Attorney Dora Villarreal "asked for everything and got nothing" in the purchase agreement from Lemon.

Swanson accused Lemon of employing last-minute "tactics" and suggested he should pay $1 million in earnest money instead of $125,000.

"You're giving away the farm if you vote 'yes' on this agreement," Swanson said.

After the meeting, Lemon said he was surprised by the board's decision, especially following a phone call on Thursday, March 18 with Brunk, Snider, Villarreal, Attorney Daniel Hardin, and Kilbride, during which terms of the agreement were discussed in advance of Monday's meeting.

Brunk sent out an email to board members following the phone call, saying the group had "all participated in what I believe was a very productive ZOOM discussion late this afternoon."

Lemon said the county refused to negotiate with him or provide an example of a draft agreement they wanted him to follow.

"They refused to provide us any guidance or language or terms. The issues related to the agreement are absolutely fictional," Lemon said. "Whenever you do a transaction, it's common to have a (negotiating) process. The fact that this process failed over a few words is disappointing. Any developer who wonders what it's like to do business in Rock Island County will read years worth of coverage of this and will go elsewhere.

"I applied with the GSA a year ago, expecting them to say, 'you don't own this building, we reject your application.' It said to me that the courthouse was their preferred option," Lemon said. "I am foolish enough to say I am still optimistic about everything. Apparently there is robust interest in purchasing this courthouse. Let's sell it to someone who wants to do it.

"On the litigation side, the county has completely exposed itself to Landmarks Illinois. The (county) wants the lawsuit to be resolved, I hope. But I think this decision works against them."

Will the Rock Island County Courthouse be sold, rather than torn down? The County Board votes Monday.

The old Rock Island County courthouse is one step closer to being saved from the wrecking ball.

Representatives from the federal government will tour the old Rock Island County courthouse Wednesday at 11:30 a.m. to evaluate its suitability as the next site of court operations for the Central District of Illinois.

County board members voted during the committee of the whole meeting to allow a representative from the government to tour the courthouse as soon as possible. Further discussion of its disposition is officially on the agenda for next Tuesday's regular board meeting, March 16.

The federal government has requested a tour of the Rock Island County courthouse in its search to find the next site of court operations for the Central District of Illinois. The deadline to tour the building is March 22, or the government will move on to consider other properties for lease.

The historic Rock Island County courthouse has been selected as a finalist by the federal government in its search as the next site of court operations for the Central District of Illinois.

Rock Island County board to downsize to 19 districts

The Rock Island County board will downsize from 25 members to 19.

The old Rock Island County Courthouse in Rock Island could have a new lease on life as a government representative will be allowed to tour the building to examine possibly using it as a federal district courthouse.

The old Rock Island County courthouse in Rock Island. A representative with the General Services Administration has asked for a live video tour of the courthouse.

Board member Kai Swanson, speaks during a county board special meeting at the Rock Island County office building, Monday, March 22, 2021.