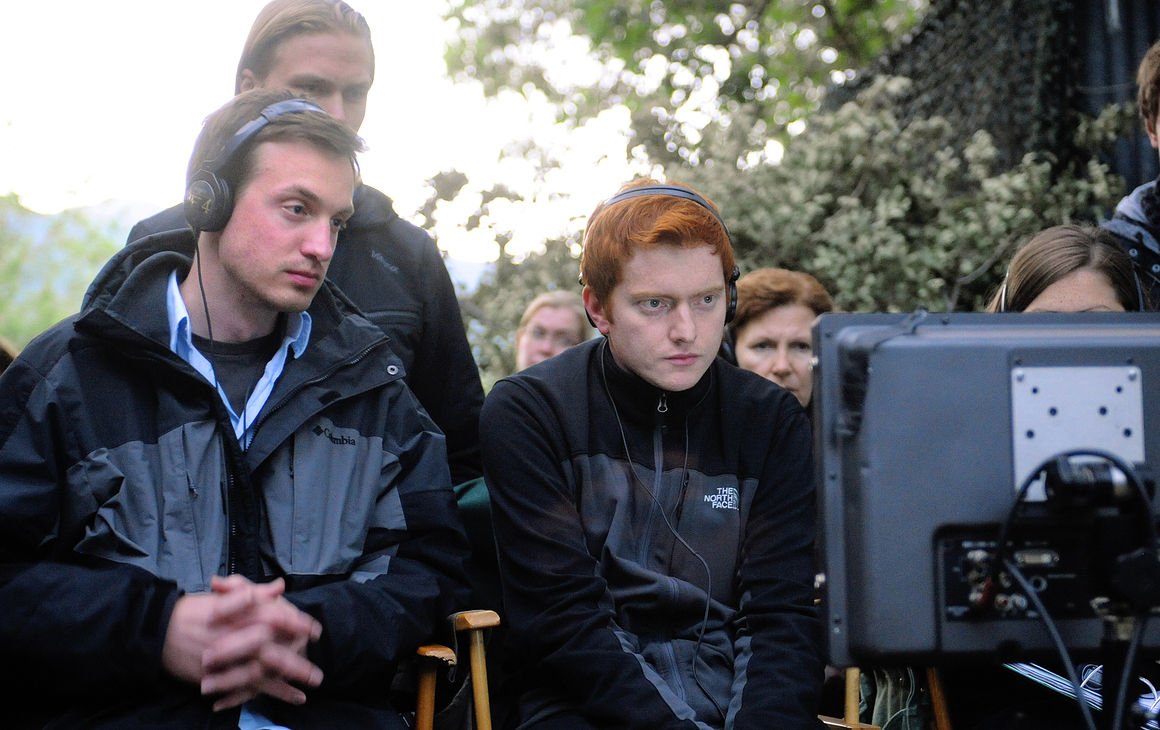 Filmmakers Scott Beck, left, and Bryan Woods, from Bettendorf, have sold a screenplay to Paramount Pictures. Their movie, "A Quiet Place," will star Emily Blunt with her husband John Krasinski, who will also direct.

Sixteen years after launching their own film-production company, Bettendorf natives Scott Beck and Bryan Woods have sold a screenplay to Paramount Pictures.

Their movie, "A Quiet Place," will star Emily Blunt with her husband John Krasinski, who will also direct. The horror thriller will be produced by Michael Bay — known for "Transformers," "Armageddon" and "Pearl Harbor" with Mr. Beck and Mr. Woods as executive producers.

"We're very humbled and honored to be surrounded by such talented, groundbreaking artists that are behind some of the best films being made today," the 32-year-olds said in an email.

"When we originally wrote the script, we designed it as a low-budget project that could be shot in Iowa for next to nothing. Needless to say, we are very flattered to see how huge the movie has become."

"A Quiet Place" will be the first film together for Ms. Blunt ("The Girl on the Train," and title role in the forthcoming "Mary Poppins Returns") and Mr. Krasinski (Jim on "The Office").

Mr. Krasinski starred in Mr. Bay’s 2016 drama “13 Hours: The Secret Soldiers of Benghazi" and expressed interest in doing a genre film in the vein of “The Purge” and “Ouija,” leading to “The Quiet Place,” which Mr. Bay's company, Platinum Dunes, recently acquired.

"They flipped for ​it, so we attached them as producers​. ​​Michael Bay has a first-look deal with Paramount, so he gave the script ​directly ​to the studio over a weekend, and ​Paramount immediately ​made an offer," they wrote.

"The process happened so fast, but when Michael gets behind a project, the studio listens and moves mountains to make him happy," according to Mr. Beck and Mr. Woods.

"John and Emily have been looking to do a film together for a while, but have been very careful about choosing the right project. They both loved our script and came on board based on that draft. The entire package came together so smoothly, which is a rarity in Hollywood."

In 2001, Mr. Beck and Mr. Woods formed Bluebox Films under which they write, direct and produce films, commercials and TV content. As teens, they were two of the top 50 directors selected from 2,000 applicants for Ben Affleck and Matt Damon's "Project Greenlight" series on Bravo.

As University of Iowa students, their work caught the eye of MTV Films, which offered them a film development deal. In 2010, they wrote, directed and produced "Impulse" starring Chris Masterson ("Malcolm in the Middle"), which became the No. 1 most downloaded short film on iTunes in its first week of release. Most recently they wrote and directed "Nightlight," a supernatural thriller released by Lionsgate Entertainment.

In January 2016, they began writing ​"A Quiet Place" based on a concept they came up with in college. The plot details are under wraps. Production is scheduled for this fall, likely in New York.​

"There's not much we can say, other than we hope the final film will be both terrifying and emotional," said Mr. Beck and Mr. Woods, now based in Los Angeles.

"A Quiet Place" will be Mr. Krasinski's third directorial effort and first for a major studio. He previously helmed the acclaimed indie “The Hollars” last year and “Brief Interviews with Hideous Men” in 2009. He's also contributing to a re-write of the Beck/Woods script.

Future Bluebox projects include directing another feature for Lionsgate, written by Mark Heyman ("Black Swan") and produced by Michael London and Darren Aronofsky. They also have a deal with Paramount to write and direct a second film — sight unseen.

"Our blind script deal with Paramount came on the heels of the studio's excitement for 'A Quiet Place,' as we both wanted to stay in business together," they said.

"We're in the process of figuring out which project we might want to do with Paramount," they said. "Right now, we're juggling another feature film that we're about to direct, alongside a television pilot we're writing."

They said "A Quiet Place" is "an exciting step in our careers, which we trace back to the Quad-Cities and the incredible support we've found from the community.

"We very much wrote the script with our hometown in mind," they said. "Out in Los Angeles, we're always talking to people about the QCA and how amazing it was to be two kids with cheap movie cameras and be able to shoot our films here for free, cast local talent, premiere the movies at the Putnam IMAX and rally together with the community to create art.

"We're very grateful for all of those formative years, and we sincerely hope to return to the Quad-Cities and make more movies there in the near future," they said.

The Iowa Department of Public Safety confirmed Thursday that a Scott County man who was shot by a Davenport police officer Wednesday night died from his injuries.

Unless otherwise noted, trick-or-treat times are for Sunday, Oct. 31.

A Rock Island police officer involved in the shooting deaths of two people in the last two years has been chosen by his peers as the 2021 Officer of the Year.

'This is what has to be done": From the picket line, striking Deere workers, local business, express worry, resolve

A neon scrawl on the Brady Street side of No Place Special Bar & Grill promises the coldest cans in town and 25-cent pool.

Deere union retiree: 'The young guys didn't know what a soup kitchen is'

Even though he retired from John Deere 25 years ago, Morrie Unterschiedt couldn't stay away from the picket line.

COVID-19 claimed another life in Rock Island County, while the latest numbers from the CDC showed RICO's seven-day positivity rate has climbed

A former Eldridge police officer accused of sexually assaulting a 14-year-old pleaded not guilty and waived his right to a speedy trial in a written arraignment filed Thursday.

An East Moline man was sentenced in Iowa Wednesday to 15 years in federal prison for conspiracy to distribute 50 grams or more of methamphetamine.

Filmmakers Scott Beck, left, and Bryan Woods, from Bettendorf, have sold a screenplay to Paramount Pictures. Their movie, "A Quiet Place," will star Emily Blunt with her husband John Krasinski, who will also direct.