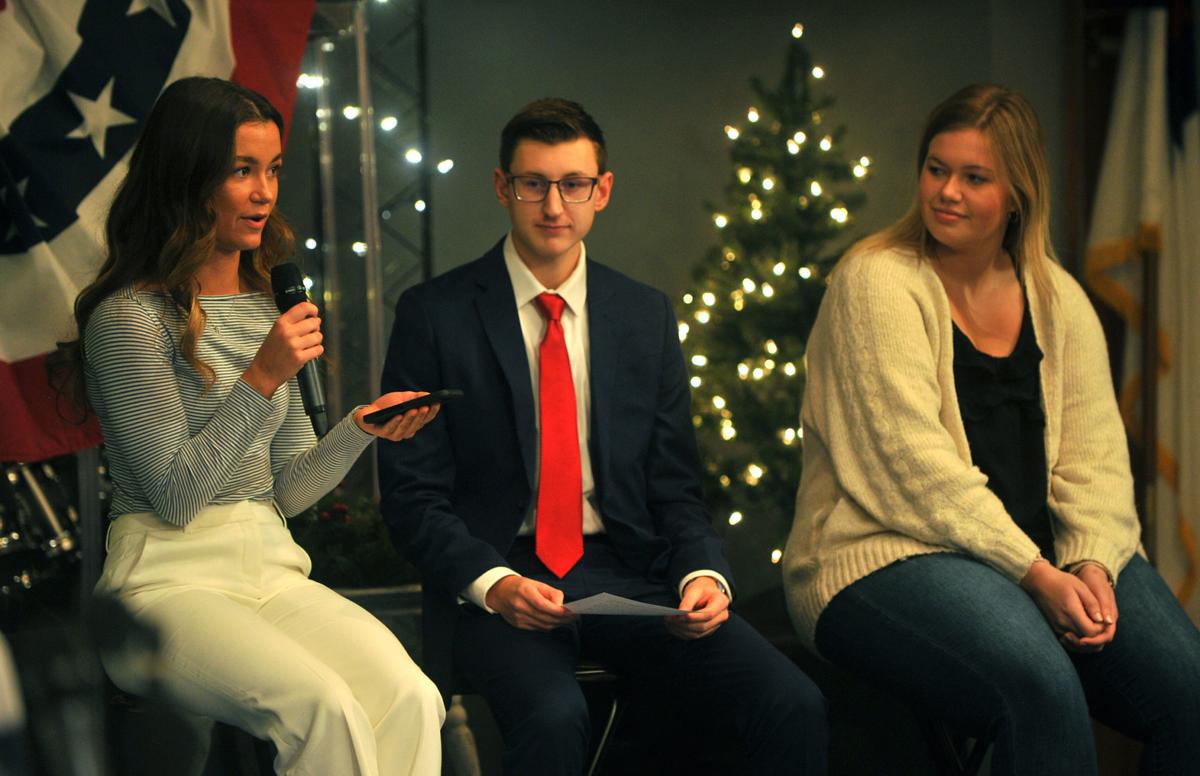 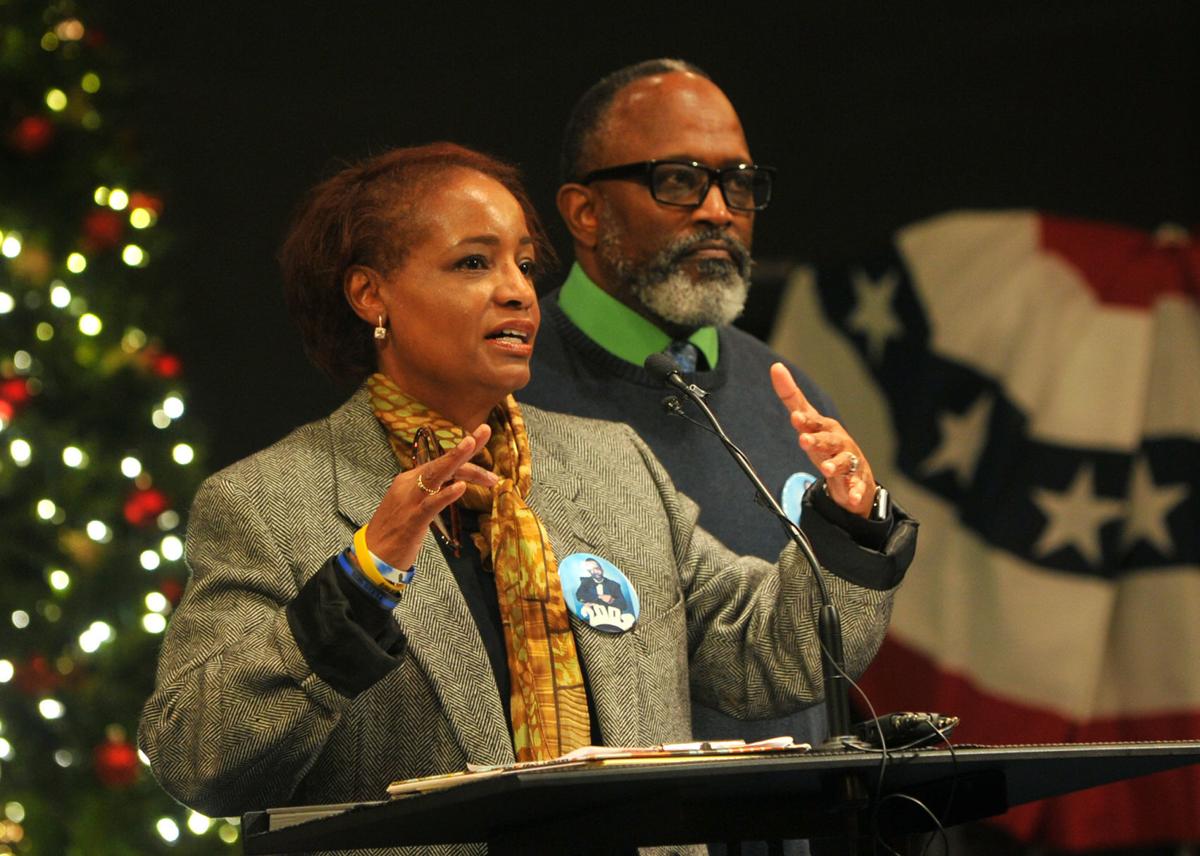 Kiyan Michael, "Angel Mom" and Advisory Board for Black Voices for Trump and Bobby Michael," Angel Dad" and Advisory Board for Veterans for Trump tell their story about their son Brandon who wa killed reportedly by an illegal immigrant, during the Scott County Teenage Republicans hosting immigration forum on Monday at Pleasant View Baptist Church. 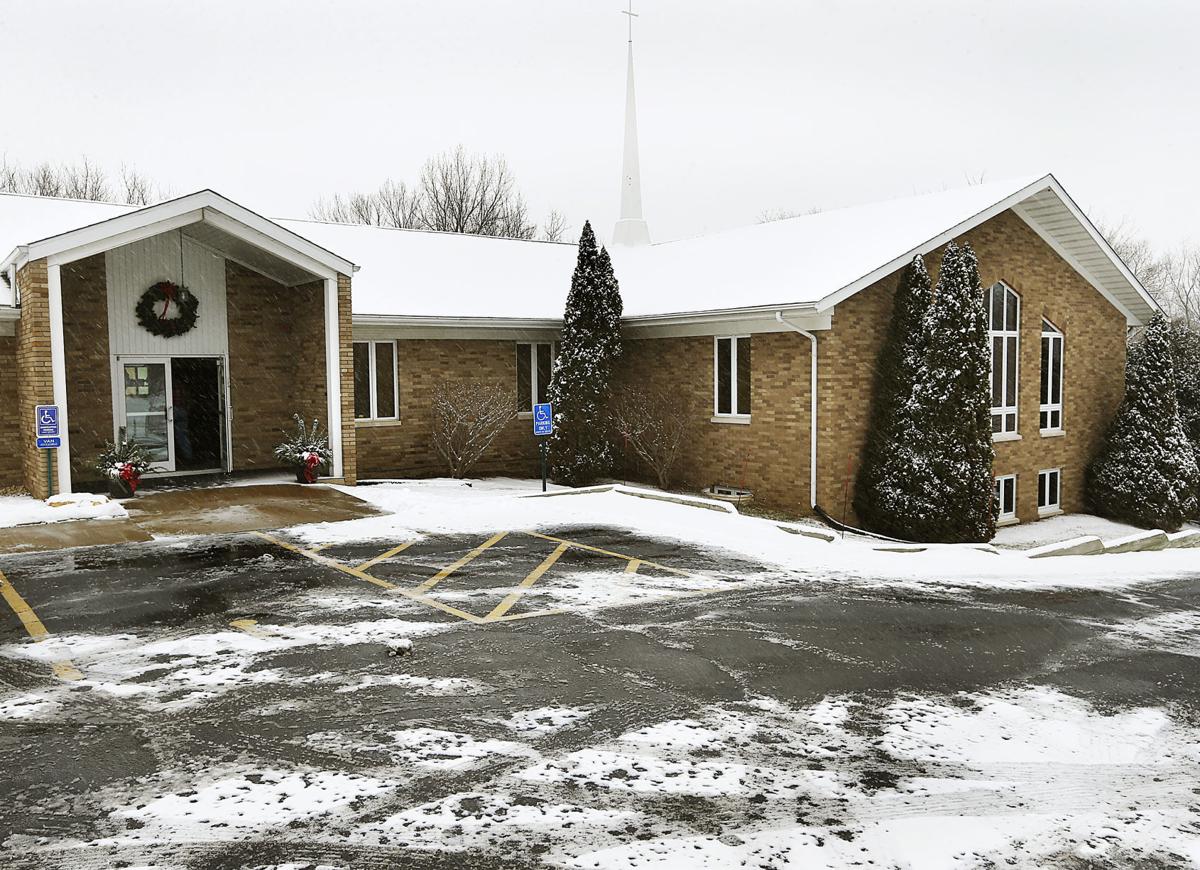 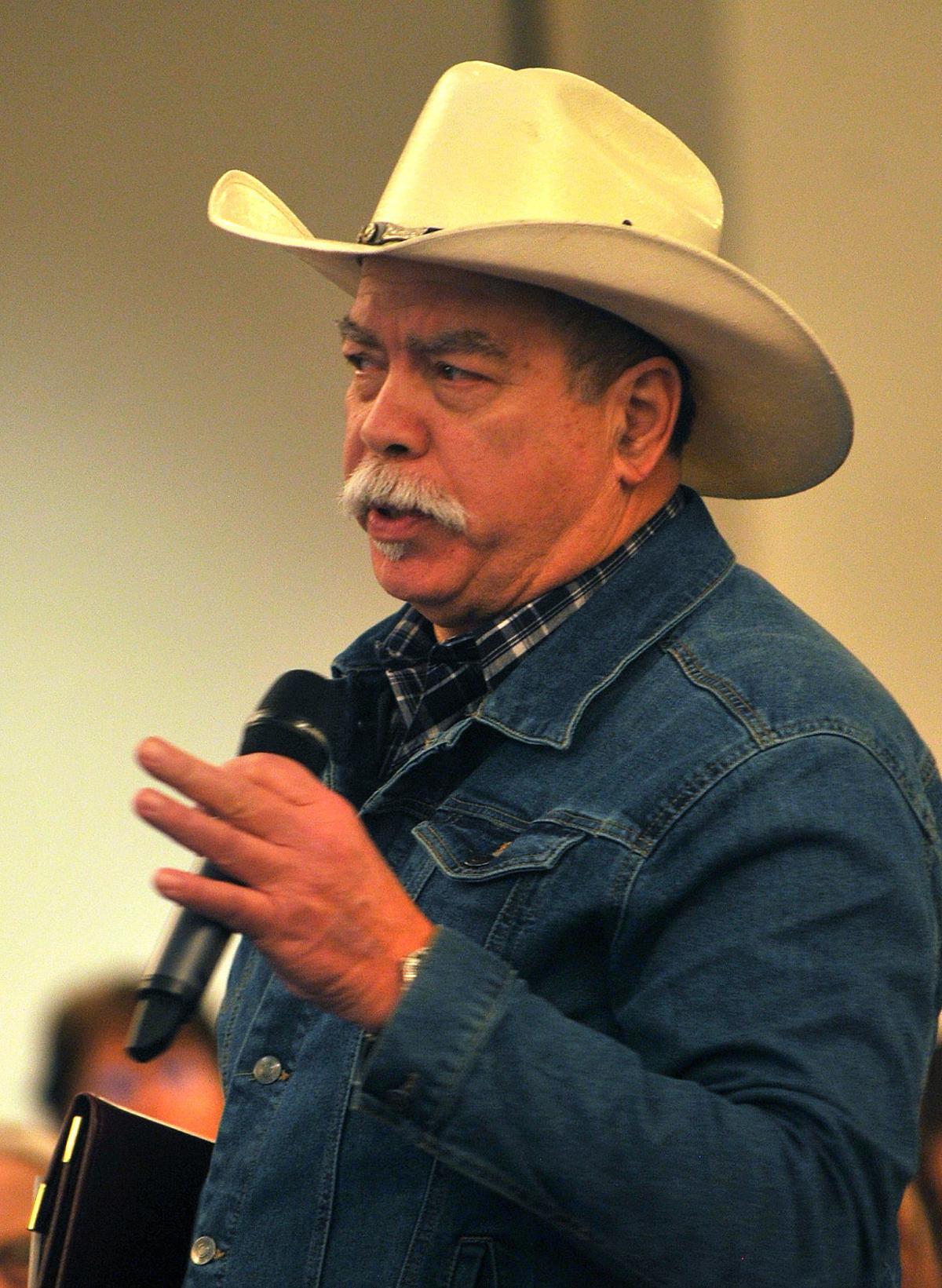 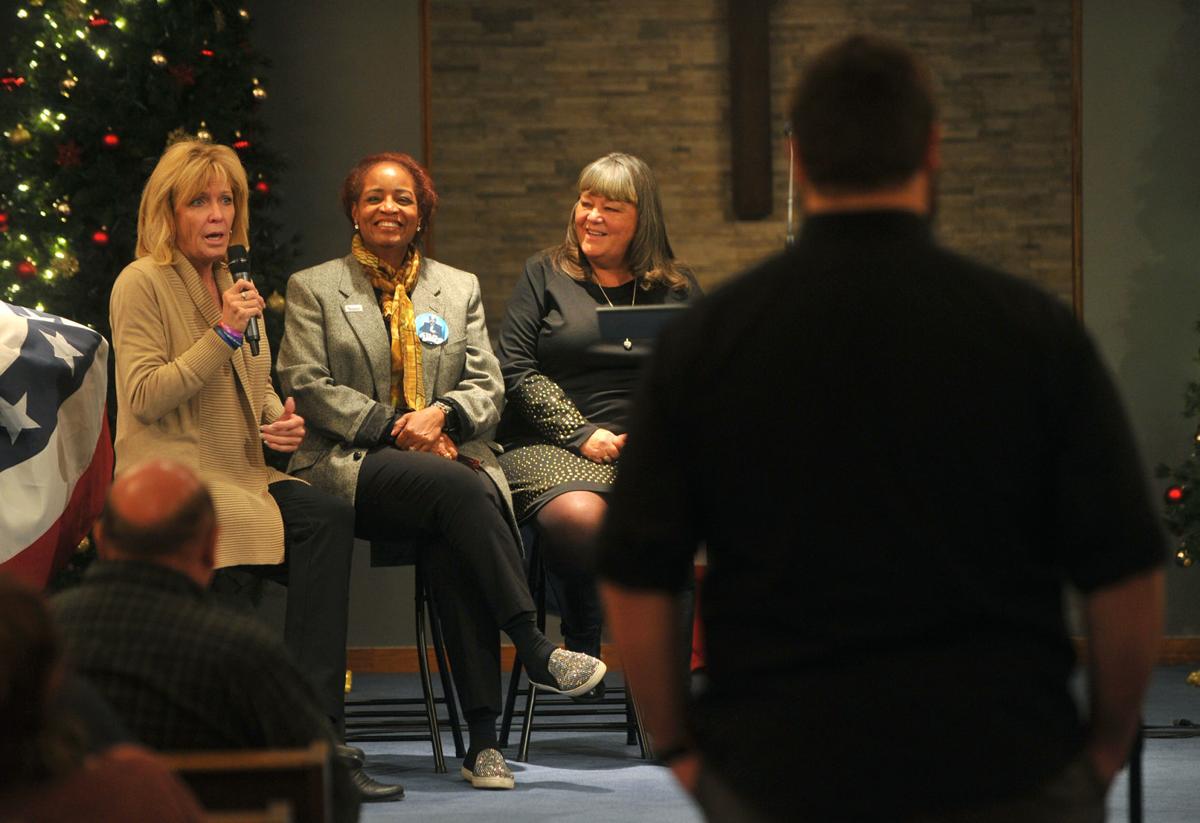 BETTENDORF – It was a Republican political rally, complete with politicians, voter registration and speeches about conservative issues.

That’s because the topic was immigration — or “the crisis of illegals,” as one attendee put it.

The packed church hall heard from several “angel parents,” or men and women whose children were killed by undocumented immigrants.

They spoke from a stage adorned with Christmas trees and an Iowa flag, which hung below a large cross. Their stories were often emotional, recounting some of the worst days of their lives.

The parents came to east Iowa from around the country to advocate for the end of illegal immigration, the construction of a wall along the U.S.-Mexico border and the re-election of Donald Trump in 2020.

“You’re all a victim of illegal aliens in this room — whether you’ve had tragedy or not,” said Mary Ann Mendoza, an “angel mom” from Arizona whose son, Sgt. Brandon Mendoza, was killed five years ago in an auto accident.

Kiyan and Bobby Michael, of Florida, spoke about their son, Brandon Randolph, who was killed 12 years ago by an allegedly twice-deported illegal immigrant.

Though the attendees and speakers railed against “illegals” broadly, their stories centered on Mexican immigrants. Many used “illegals” and “Mexicans” interchangeably.

The final speaker was Nick Fuentes, a far-right activist who attended the 2017 Unite the Right rally in Charlottesville and has been condemned by some on the political right as racist. Fuentes railed against both illegal and legal migration due to the “drastic consequences” of immigration from non-European, non-white countries. He argued that immigration into the U.S. should be shut down so that a “monoculture” can be created for “others to assimilate into."

“They are given privileges, they are given excuses and they are given freedom,” Deborah Elkins said of illegal immigrants. Her son Aaron "Joshua" Hampton was shot to death in November 2018 by a man originally from Mexico who authorities said was in the U.S. illegally.

Elkins warned that gang members such as members of the notorious MS-13 gang are often indistinguishable, “walking your streets” or even “sitting next to you right now.” “They could be the man working at Taco Bell or the man picking up your trash,” she added.

The forum was hosted by the Scott County Teenage Republicans, a group founded in early 2019 by Adam Parcel, a senior at West High School in Davenport. The group provides a “safe place” for young conservatives like himself who have endured what Parcel described as ridicule, intimidation and death threats in school. “I’ve been marginalized,” Parcel said.

When asked if immigrants were also his neighbor, Parcel said, “I’m all for people who come here legally. Illegal immigration is a crime itself."

The event featured some levity from Scott Presler, a long-haired conservative activist and celebrity of right-wing Twitter. In order to show that “our movement is based on love,” Presler, walking through the aisles of the church in his American-flag cowboy boots, led attendees in a round of applause for the media present. President Trump routinely degrades journalists as “fake news,” and several of Monday night’s speakers condemned the “liberal media” and “fake news.”

The event opened with a rendition of the national anthem and a prayer from Pastor Joseph Huss, of Northside Baptist Church, in Davenport. “Lord, we love people from other nations,” Huss said, “but we need help staying free.”

The church's event dueling speeches from Republican candidates for Iowa’s second congressional district, Bobby Schilling and Mariannette Miller-Meeks. The latter’s speech was interrupted by a heckler who was escorted out.

For attendees and panelists, one of the biggest political aims of their activism is the judiciary, including ensuring a conservative majority on the U.S. Supreme Court and impeaching local judges. Trump, Kiyan Michael said, was “put in the White House to save our nation.”

“If I’m a hatemonger, so be it. If I’m a racist, so be it,” said Steve Ronnebeck, an Arizona congressional candidate whose son Grant was shot to death by a man he said was in the U.S. illegally. “I support our president. I support the fact that we’re going to build that wall.”

Ronnebeck explained that his “hatemonger’s holidays” involve spending time at his son’s gravestone.

Michelle Wilson-Root, an Iowan whose 21-year-old daughter was killed by a drunk driver in the U.S. illegally, urged the crowd to support Trump because he “cares truly about American people,” she said. “We need to come first. Not illegal aliens.”

Some clouds, some sun, and temps in the mid-40s. That pretty much sums up today's forecast. Here are the details from the National Weather Service.

Protesters who objected to the speech given by a far-right activist last week at a Bettendorf church gathered Sunday morning near the church, …

Kiyan Michael, "Angel Mom" and Advisory Board for Black Voices for Trump and Bobby Michael," Angel Dad" and Advisory Board for Veterans for Trump tell their story about their son Brandon who wa killed reportedly by an illegal immigrant, during the Scott County Teenage Republicans hosting immigration forum on Monday at Pleasant View Baptist Church.