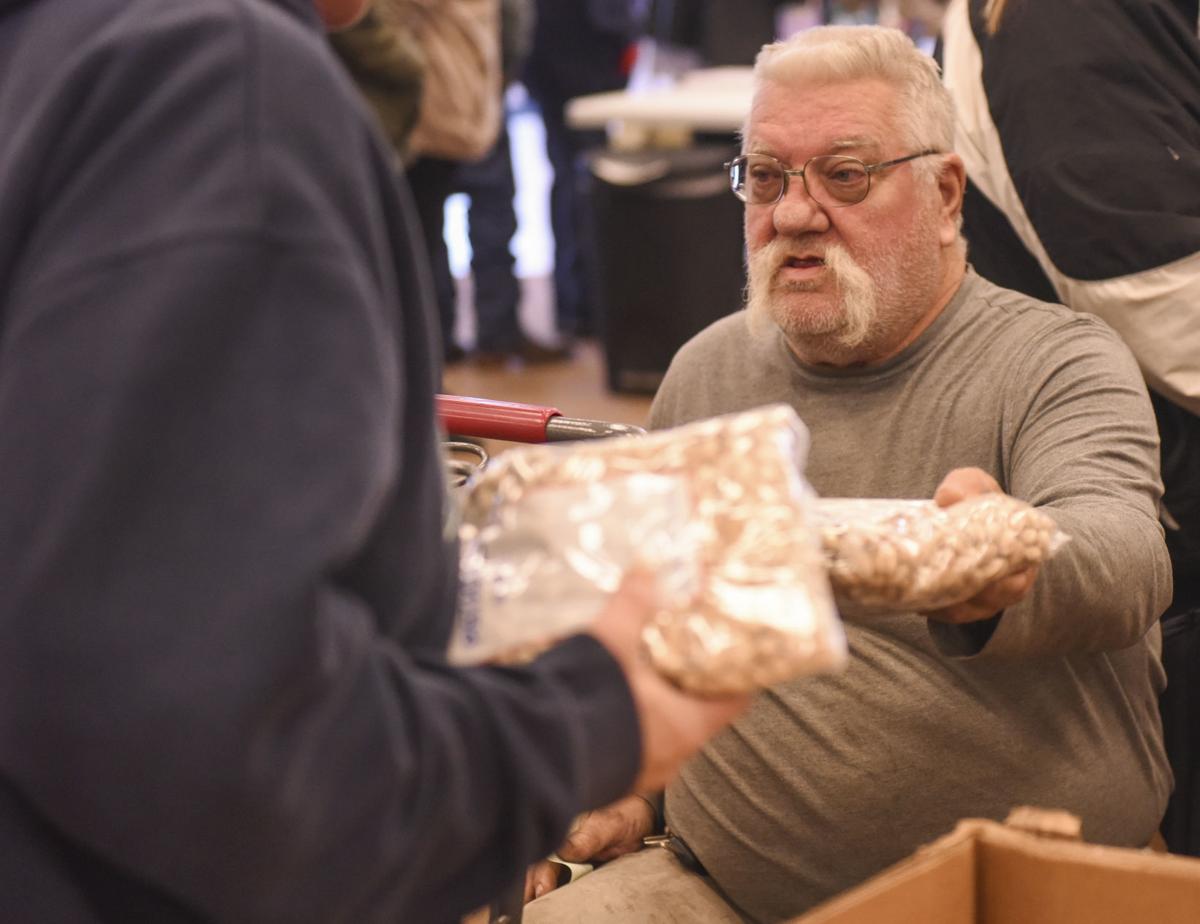 Garry Lienen of Davenport hands his friend Dee Barron of Rock Island food to place into his cart at River Bend Foodbank on Tuesday in Davenport. 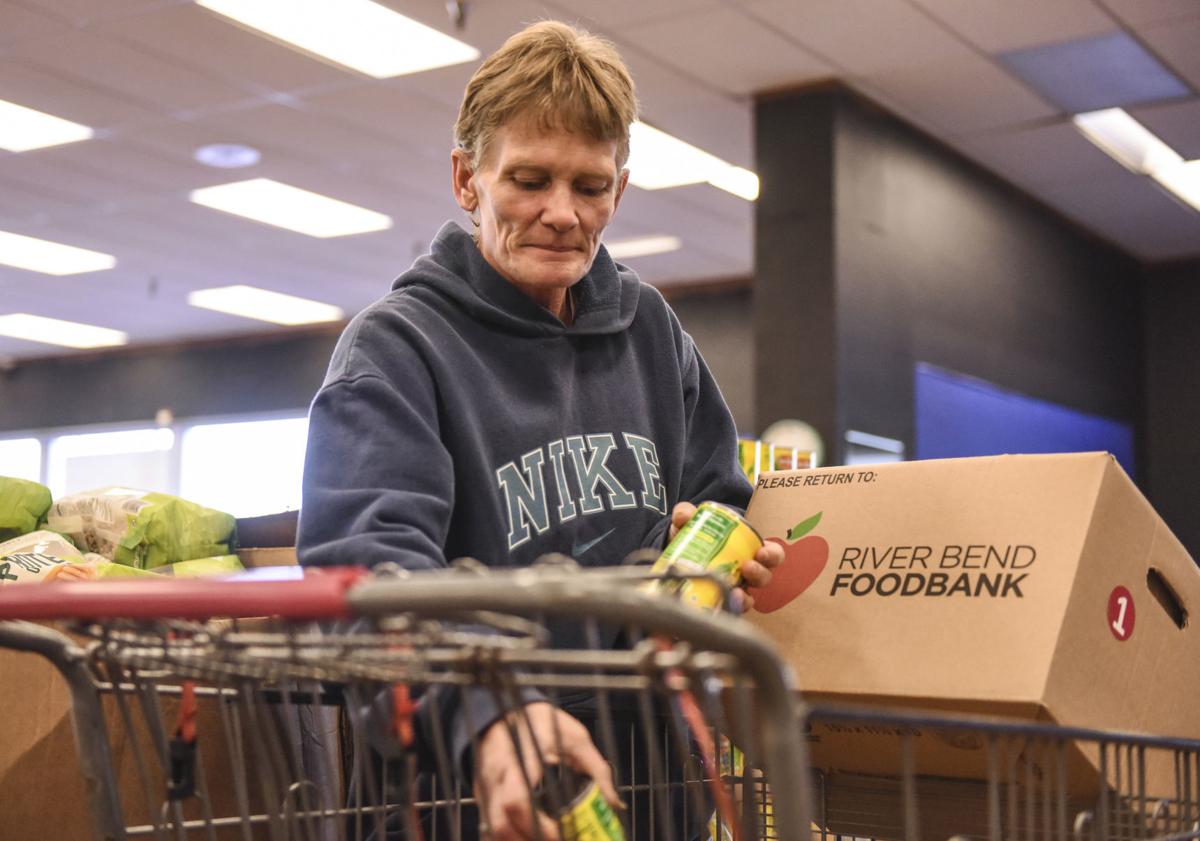 Dee Barron of Rock Island places canned peaches into her cart on Tuesday at River Bend Foodbank in Davenport. 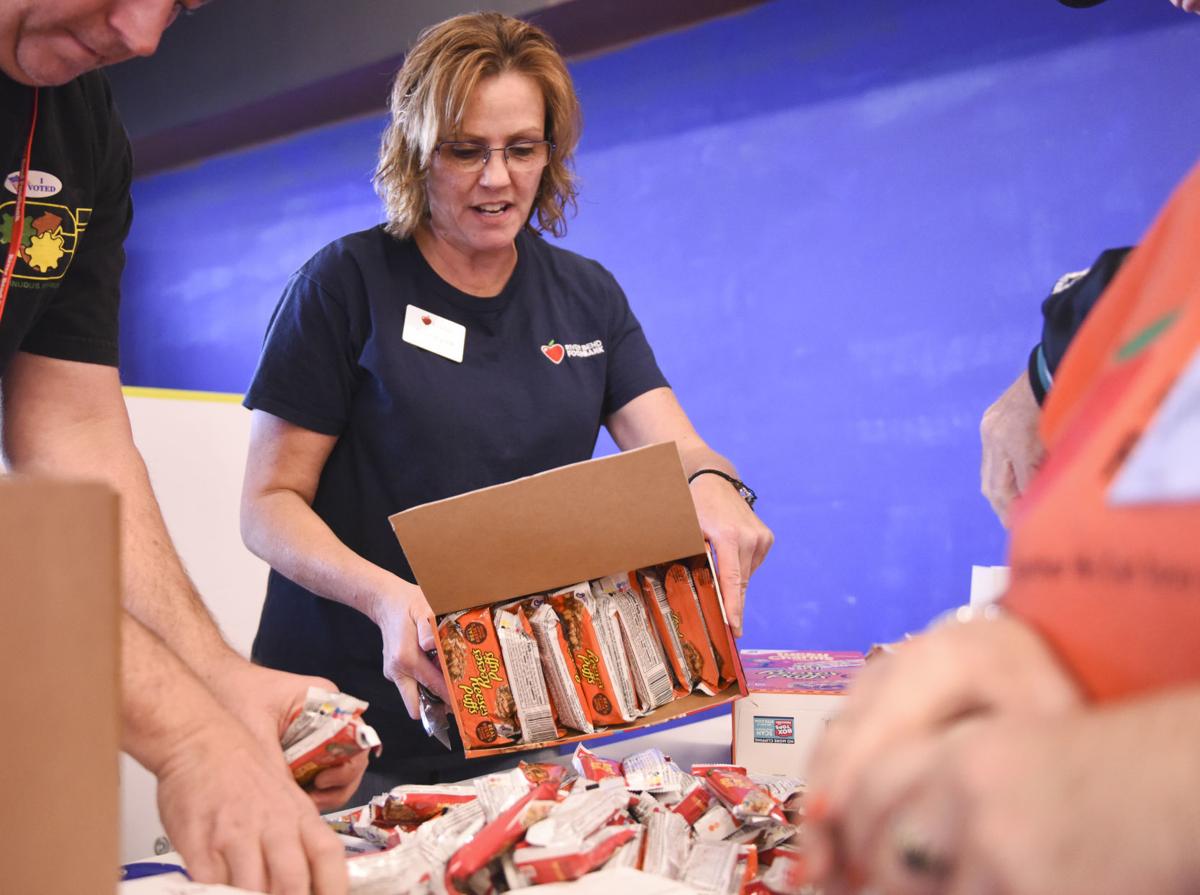 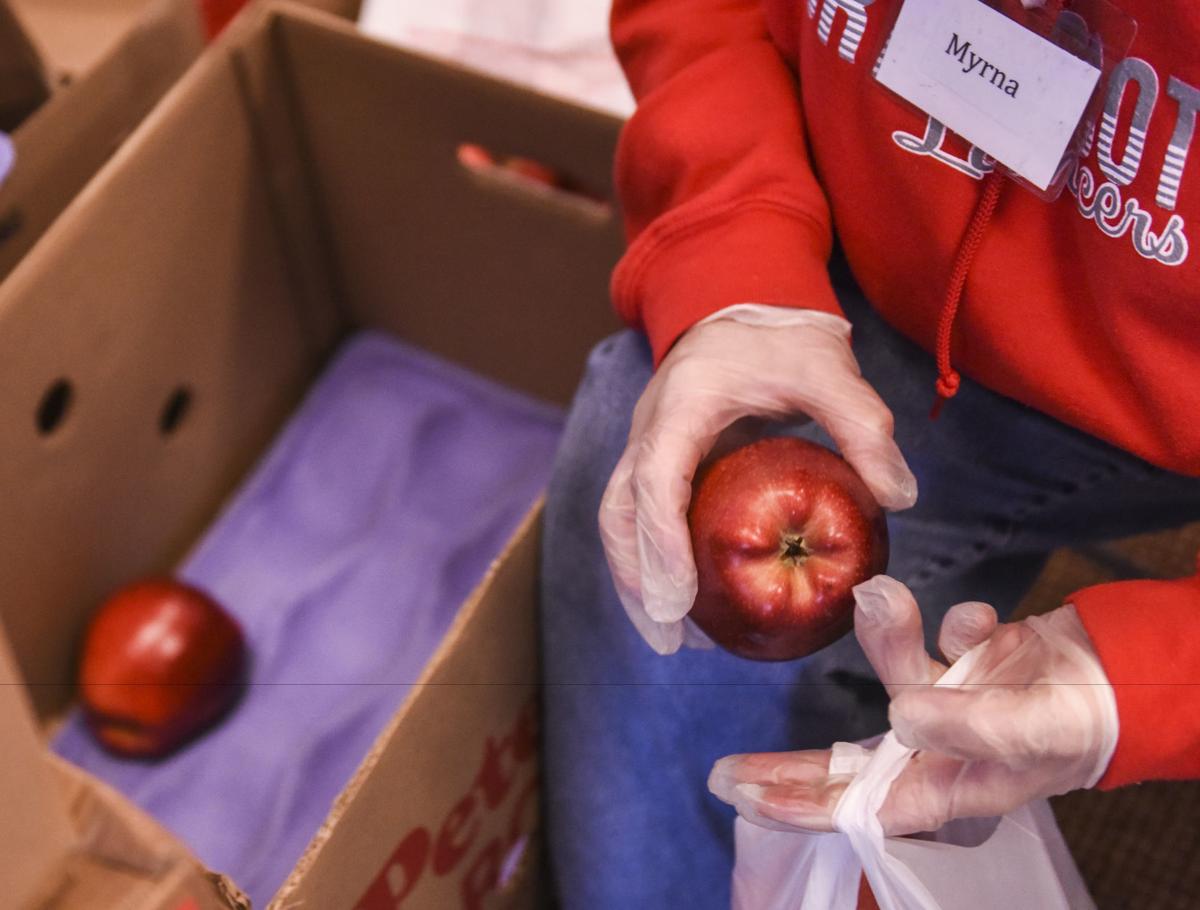 In this file photo from November, Myrna Cudmore of Clinton bags apples at the River Bend Foodbank in Davenport. 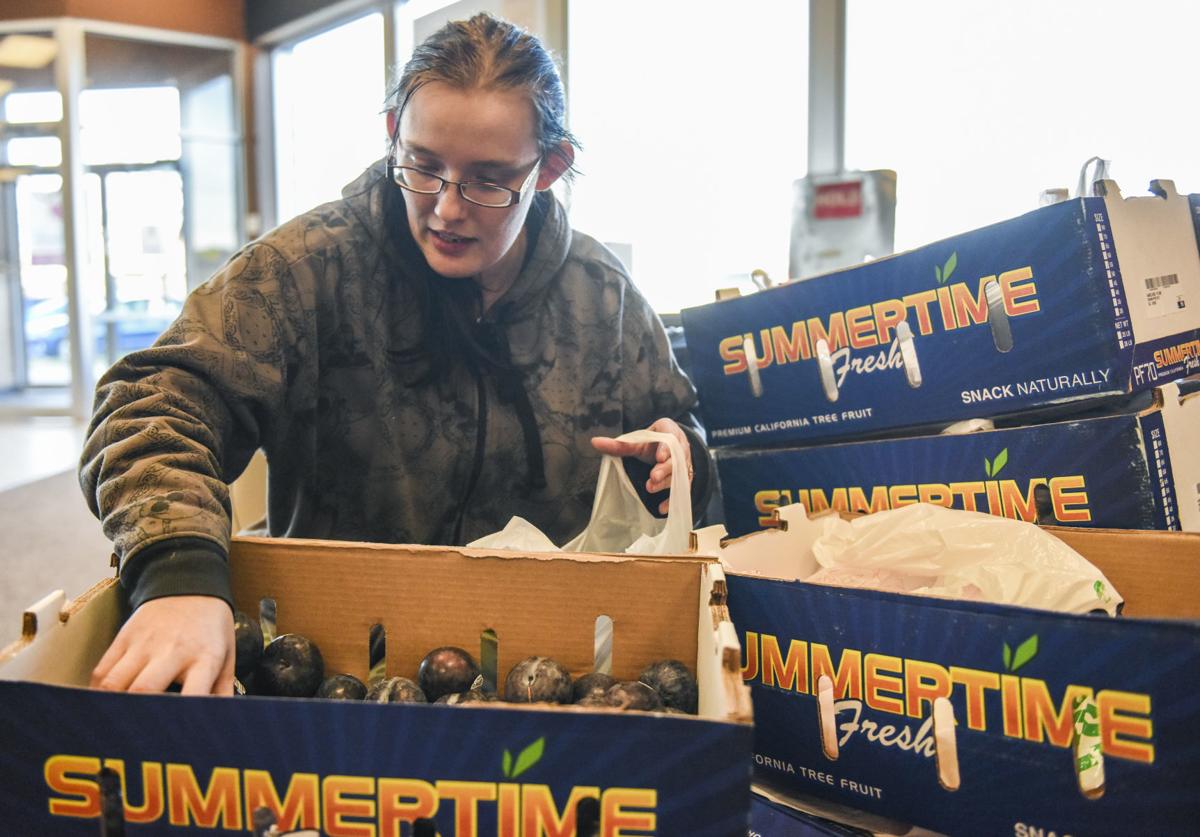 In this photo from November, Samantha Howard of Clinton bags plums for those coming through River Bend Foodbank in Davenport.

Vietnam-era veteran Garry Lienen, Davenport, steered his wheelchair and shopping cart through the aisles of a large food pantry, stocked with everything from fresh plums to canned chickpeas.

The River Bend Food Pantry, in a former footwear store at a NorthPark Mall property in Davenport, is a busy spot where shoppers lined up more than an hour ahead of opening time to sign in, grab a cart and, while they follow the arrows on the carpet, select food, including milk and breakfast cereal.

Pantries opened earlier this year at both SouthPark Mall, Moline, and NorthPark Mall.

"NorthPark and SouthPark Malls are being re-imagined and we are looking at what best serves our visitors," said Jerry Jones, senior property manager. "Through this process, we partnered with River Bend Foodbank and are happy to impact the members of our community. "

Dana Myrick, of Davenport, pantry coordinator, says the food arrives by truck on the days the pantry isn’t open for clients. “Dedicated volunteers show up and help us put it away,” she said.

One day in October, the pantry served 263 families, a record number. Usually it serves about 200 families each day it is open. Sometimes the numbers are higher, “Especially toward the end of the month,” Schroder said. “We tend to see an increase because SNAP (Supplemental Nutrition Assistance Program) benefits have run out.”

“We used to do monthly distributions from our warehouse in Davenport,” said Jennifer Schroder, of River Bend. “It got to be too large to manage. We went from serving 200 families in three or four hours to serving more than 1,000.”

The location is a good one, she said, because it’s part of the mall, but not in the mall.

“Obviously, the word’s getting out,” she said. “The number of guests we serve has continued to increase every month.”

Shoppers chatted while volunteers helped load carts and guided them to various foods. Much of the food is from The Emergency Food Assistance Program (TEFAP,) a federal program to help American on low incomes by providing them with emergency food. “There has been an overwhelming influx of food from TEFAP,” Schroder said.

The NorthPark pantry, which opened in the summer earlier this year, “is another great way to distribute the food,” she said.

River Bend opened its food pantry at SouthPark Mall, Moline, to distribute a surplus of food arriving from a federal trade-mitigation program.

The U.S. Department of Agriculture began the program to help farmers hurt by the trade dispute and the new tariffs on farm products.

The result is piles and pallets of food at the pantry, where guests continued to stream in the door. Each family selected the products they wanted.

“This is client choice,” Schroder said. “Guests can choose what they need and what they want.”

Schroder figures people come only when they need to; otherwise, they wouldn’t stand in line for an hour to get food.

“In our thinking, you’re only going to come if you need to, “ she said. She added guests might need the pantry for a brief or extended time, depending on circumstances – until they can get back to work or find a job, for example. “We’re here to welcome everyone and get you the food you need,” she said.

While shoppers made their selections, more than a dozen volunteers scurried to help customers and keep food stocked. Among them was Samantha Howard, 24, of Clinton, who bagged fresh plums – 14 per bag.

“I volunteer because it makes me feel happy,” she said. “You’re helping those who aren’t always in the best place.”

“It gives me something to do. It gets me out of the house,” said regular volunteer Myrna Cudmore, 68, of Davenport. “I cannot believe all the food we get in here."

Lienen, an Army veteran, said he visits the NorthPark pantry once a week, and visits other pantries to help him get by on Social Security. “It feeds me,” he said.

The Emergency Food Assistance Program is a federal program to provide free emergency food-assistance. The USDA provides 100% American-grown USDA foods and administrative funds to states to operate the program.

According to the USDA Food and Nutrition Service, the program helps low-income Americans, including elderly people.

Through TEFAP, the U.S. Department of Agriculture purchases a variety of nutritious, high-quality USDA Foods, and makes those foods available to state distributing agencies.

The amount of food each state receives out of the total amount of food provided is based on the number of unemployed persons and the number of people with incomes below the state poverty level. States provide the food to local agencies, usually food banks, which then distribute the food to local organizations, such as soup kitchens and food pantries to directly serve the public.

States also provide the food to other types of local organizations, such as community- action agencies, which distribute it to low-income households.

Under TEFAP, states also receive administrative funds to support the storage and distribution of USDA Foods. These funds must, in part, be passed down to local agencies. TEFAP is administered at the federal level by the Food and Nutrition Service, an agency of the USDA.

River Bend Foodbank, a non-profit organization, collects and distributes food to hunger-relief charities. Food comes from various sources in the food industry, such as grocery stores and wholesalers, which has thousands of pounds of food to give away – food that would otherwise be thrown away.

River Bend warehouses the food, and with help from volunteers, sorts, packs and redistributes it to the community.

Deere & Co. contributed seed money to rent warehouse space and to hire an executive director and warehouse manager. In the first year of operation, 190,000 pounds of food was distributed.

In 2014, River Bend Foodbank moved from Moline to a 60,000-square-foot warehouse in Davenport. That year, 7.3 million meals were distributed.

In 2015, founding Executive Director Tom Laughlin retired after 33 years of service, and Mike Miller became the new president and CEO after he served food banks in Indianapolis, Indiana and Cleveland, Ohio.

In 2018, the food bank merged with the Quad-Cities Student Hunger Drive, and in 2019, with St. Stephen’s Food Bank in Dubuque.

For more information or to volunteer, go to https://riverbendfoodbank.org/

Garry Lienen of Davenport hands his friend Dee Barron of Rock Island food to place into his cart at River Bend Foodbank on Tuesday in Davenport.

Dee Barron of Rock Island places canned peaches into her cart on Tuesday at River Bend Foodbank in Davenport.

In this file photo from November, Myrna Cudmore of Clinton bags apples at the River Bend Foodbank in Davenport.

In this photo from November, Samantha Howard of Clinton bags plums for those coming through River Bend Foodbank in Davenport.