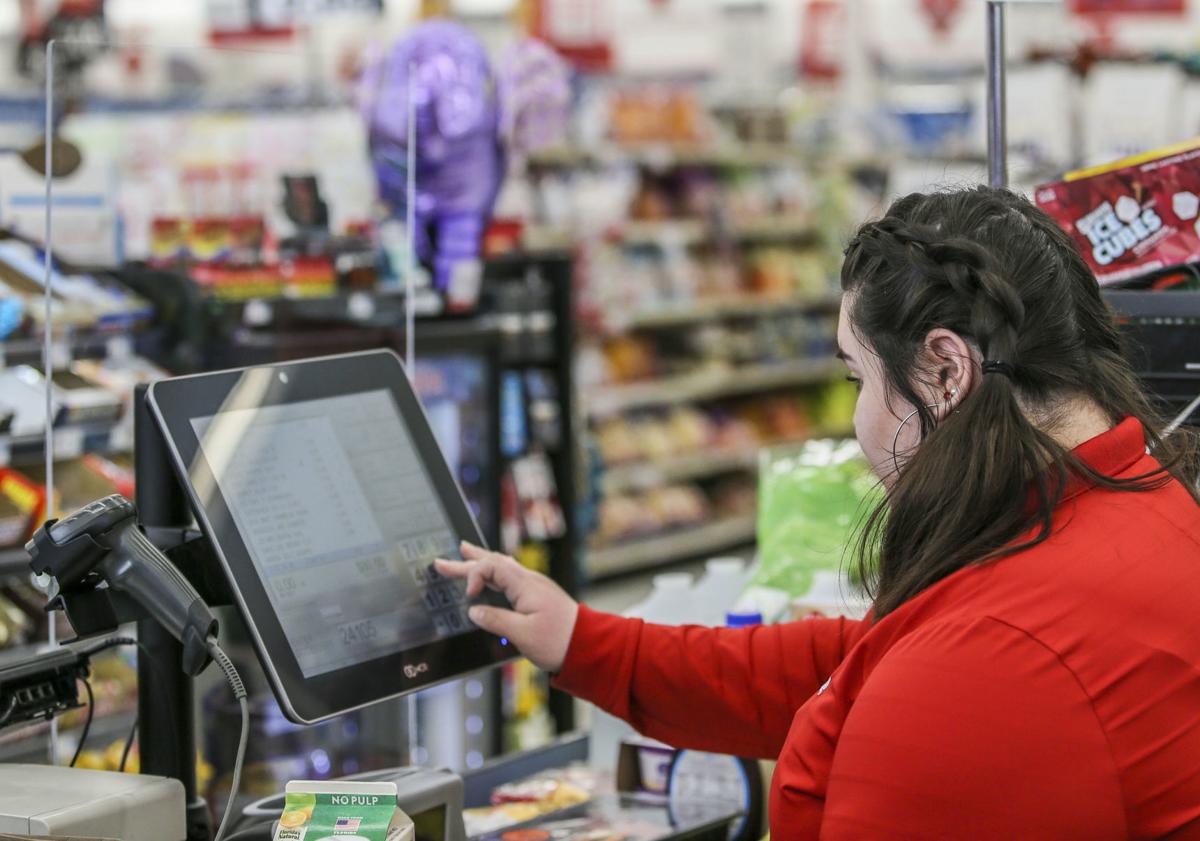 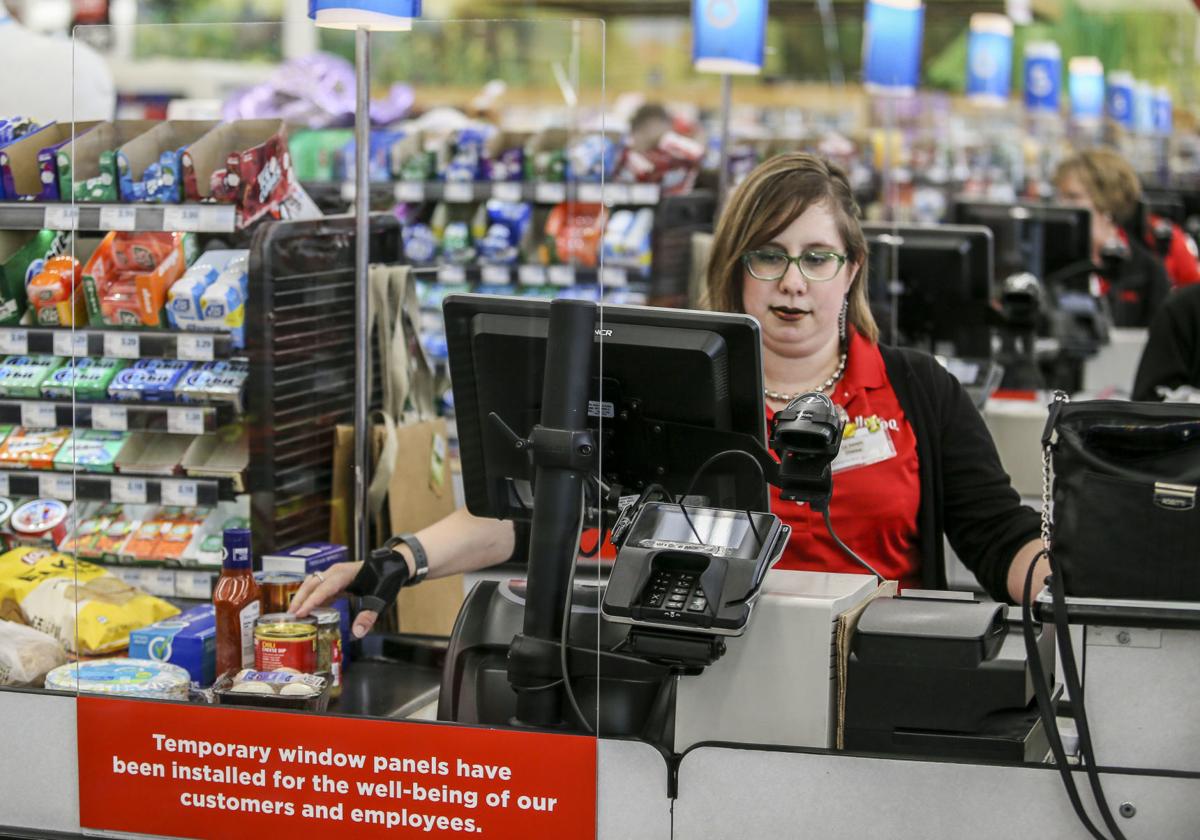 Liz Adolphi, a checker at the Bettendorf HyVee, scans groceries behind a protective window panel. The shields are one of many steps Hy-Vee took — and is taking — to protect employees and customers during the COVID-19 pandemic. 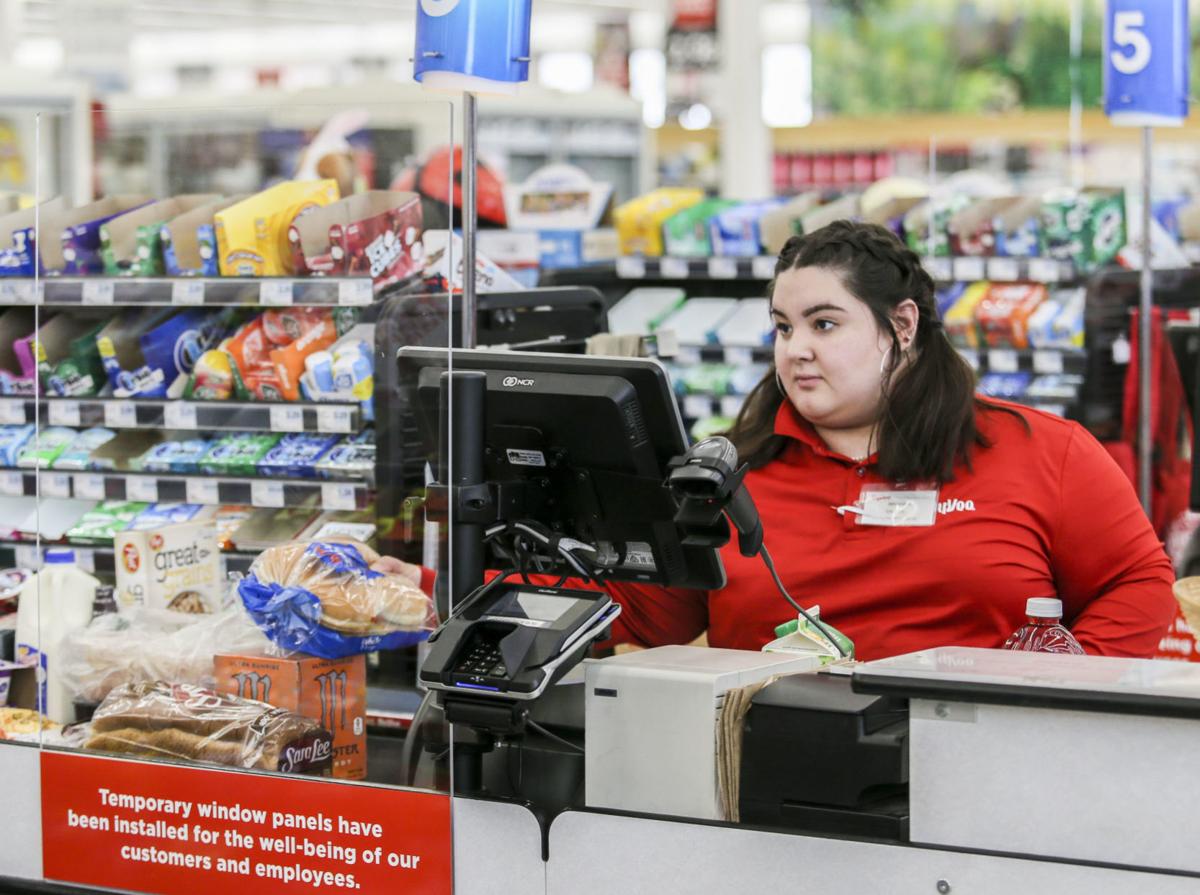 Brena Esparza scans groceries behind protective window panel to protect the employees and shoppers from the COVID-19 outbreak.

COVID-19 continues to affect life in the Quad-Cities, but it's also creating jobs in certain sectors.

Per Mar Security Services has been getting requests for security officers to watch businesses slowed by coronavirus closures, and others, like certain retail stores that have seen an increase in business as the pandemic continues, Brian Duffy, the security firm’s chief operating officer, said Monday.

Per Mar expects it may need more staff for its permanent clients as circumstances changes because of the coronavirus.

Applicants would need to pass a background check and drug screening, he said. Experience in security is preferred, but people who are hired will receive training.

As a precaution, interviews will not be in person, he said.

Per Mar has a presence in a number of states, but Duffy said many of the openings will likely be in the Quad-Cities.

“I think that’s actually where we’ve seen the most because we’re so well known here,” he said.

Hy-Vee is hiring because of the increased demand for groceries during the pandemic, according to a news release issued by the grocery chain.

The company needs people for temporary, part-time hourly work, including restocking, cleaning and sanitizing, the release, issued Friday, said. The recruitment applies to its stores across its eight-state coverage area.

Earlier this month, Hy-Vee announced it would close its four distribution hubs that support its online delivery service -- one of them in Urbandale, Iowa.

Tuesday, company spokeswoman Christina Gayman said the service would be shifted to individual stores in affected areas, and that the decision would not affect the Quad-Cities. Hy-Vee stores here were already handling online orders themselves.

The COVID-19 pandemic led to Hy-Vee delaying the transition of the service back to stores by about a week, Gayman said. It is expected to start the week of March 30. The pandemic will not postpone the closure of the hubs, which is scheduled for May 6.

Job hunting and unemployment resources are also available from the state governments.

Iowa has a job board, and other resources available, including how to access unemployment insurance if affected by the outbreak, spokeswoman Martha Garcia-Tappa said. They can also call 866-239-0843 for more information.

“There are companies like Hy-Vee, Good Samaritans and Walmart, a lot of companies looking for people,” she said.

Garcia-Tappa also encouraged job seekers to “like” and check the Iowa Works Facebook pages. In this area there are specific pages for Davenport, Muscatine, Clinton and Maquoketa.

In Illinois, people looking for jobs can also check a job board and other resources.

“What do people need the most now, and how can you help them get it?” she said.

Grocery stores, carry-out food companies, drug stores, hardware stores and security services are or may see an increased call for their services, she said.

“In the past couple of days, some employers are offering increased pay for new and existing workers,” Arends said. “Clearly, the openings we see growing right now are in jobs that have a lot of contact with the public. There is a risk involved, and individuals who work in these roles need to ensure that they are following the health recommendations of the CDC (Centers for Disease Control and Prevention) closely.”

For those whose skill sets are not in demand right now while the pandemic is underway, Arends suggested readying the cover letter and the resume, researching potential employers and other proactive activities.

“When the corona dust clears, we will return to a job market that is in need of skilled workers,” Arends said.

Kwik Trip, which operates several Kwik Star convenience stores in the Quad-Cities, is also hiring. It had an open interview day planned that has since been canceled because of COVID-19.

Kwik Trip is looking for permanent employees, he said, but will consider people who are only needing short-term work because of coronavirus, he said.

“We will absolutely consider and listen to them,” Wrobel said.

He said the company would hope people looking for temporary work would consider staying with Kwik Trip if hired.

“It is a good place to work,” Wrobel said.

Rock Island County Sheriff Gerry Bustos on Tuesday told board members a main concern of the response to COVID-19 is making sure first responders in the community have enough personal protective equipment such as surgical masks, face shields, gowns and gloves.

Update: The latest on the coronavirus in the Quad-Cities

Here's the latest updates about the coronavirus and its impact on the Quad-Cities.

Pay raises and more benefits are coming for Hy-Vee, Fareway grocery store workers and Kraft Heinz employees in the Quad-Cities amid the COVID-…

Cleaning out your house while you're stuck at home? Not so fast -- bulk waste and yard trash are being suspended in many parts of the Quad-Cities

The coronavirus pandemic has caused some changes to how curbside trash and recycling are being handled in the Quad-Cities.

Initial unemployment claims continue to climb in the Quad-Cities, and the United States, as the COVID-19 pandemic continues.

A bar owner has been accused in Rock Island County of violating Illinois’ COVID-19 restrictions against serving food and drink on site.

Rock Island has a second confirmed case of COVID-19

Rock Island County has a second confirmed case of COVID-19.

UNION: I-74 bridge work comes to halt because of positive COVID-19 case

Construction on the new Interstate 74 bridge has come to a halt after at least one worker tested positive for COVID-19, according to a union working on bridge construction.

Liz Adolphi, a checker at the Bettendorf HyVee, scans groceries behind a protective window panel. The shields are one of many steps Hy-Vee took — and is taking — to protect employees and customers during the COVID-19 pandemic.

Brena Esparza scans groceries behind protective window panel to protect the employees and shoppers from the COVID-19 outbreak.