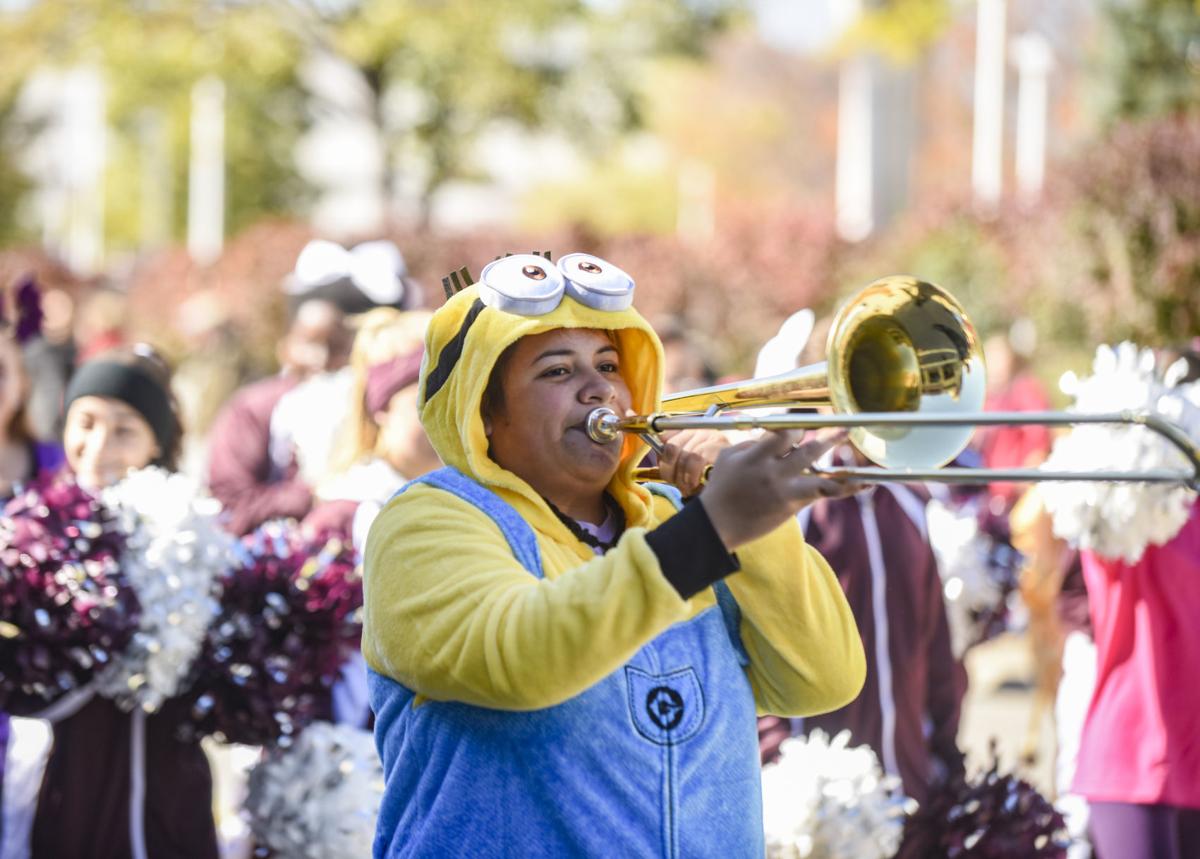 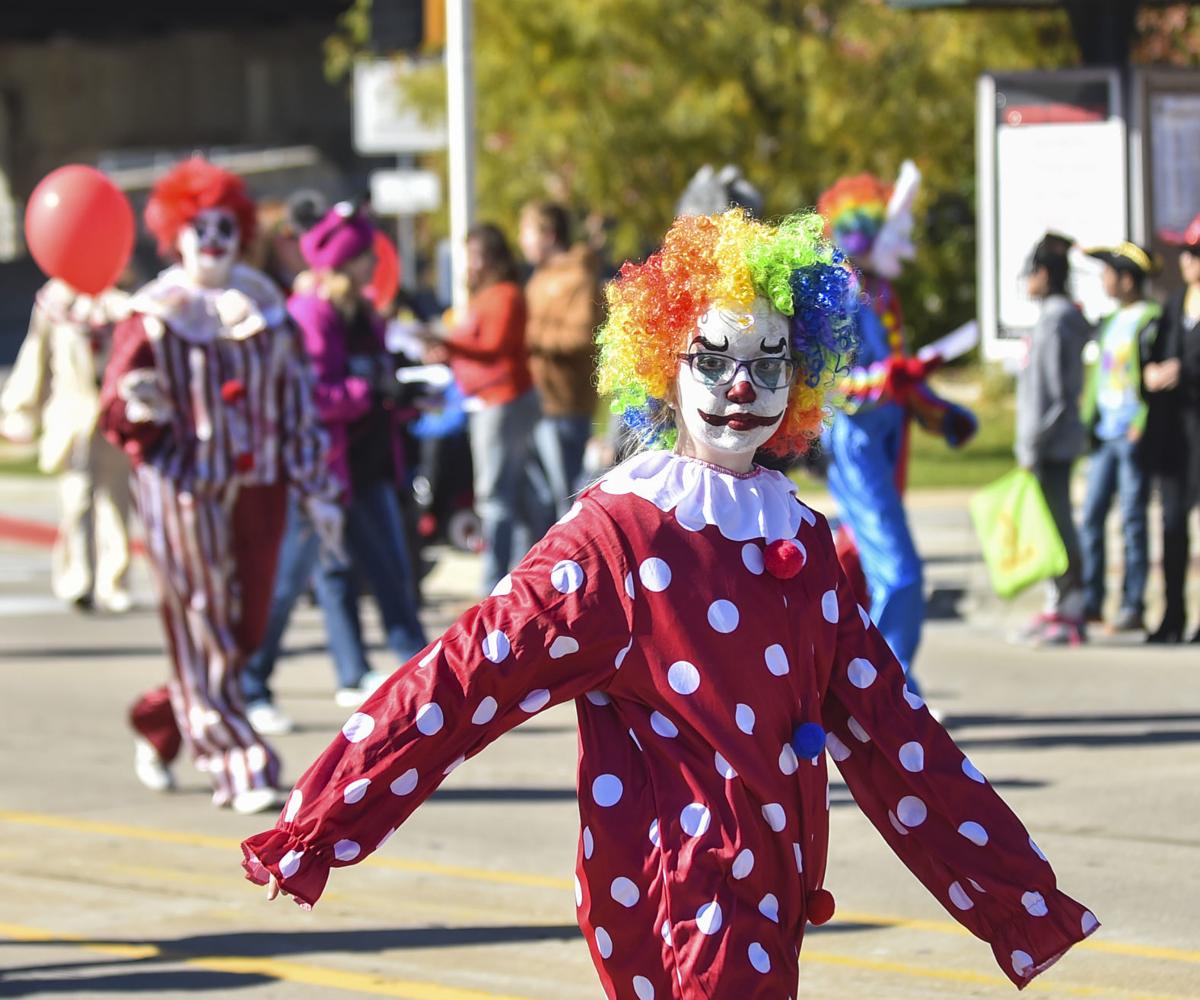 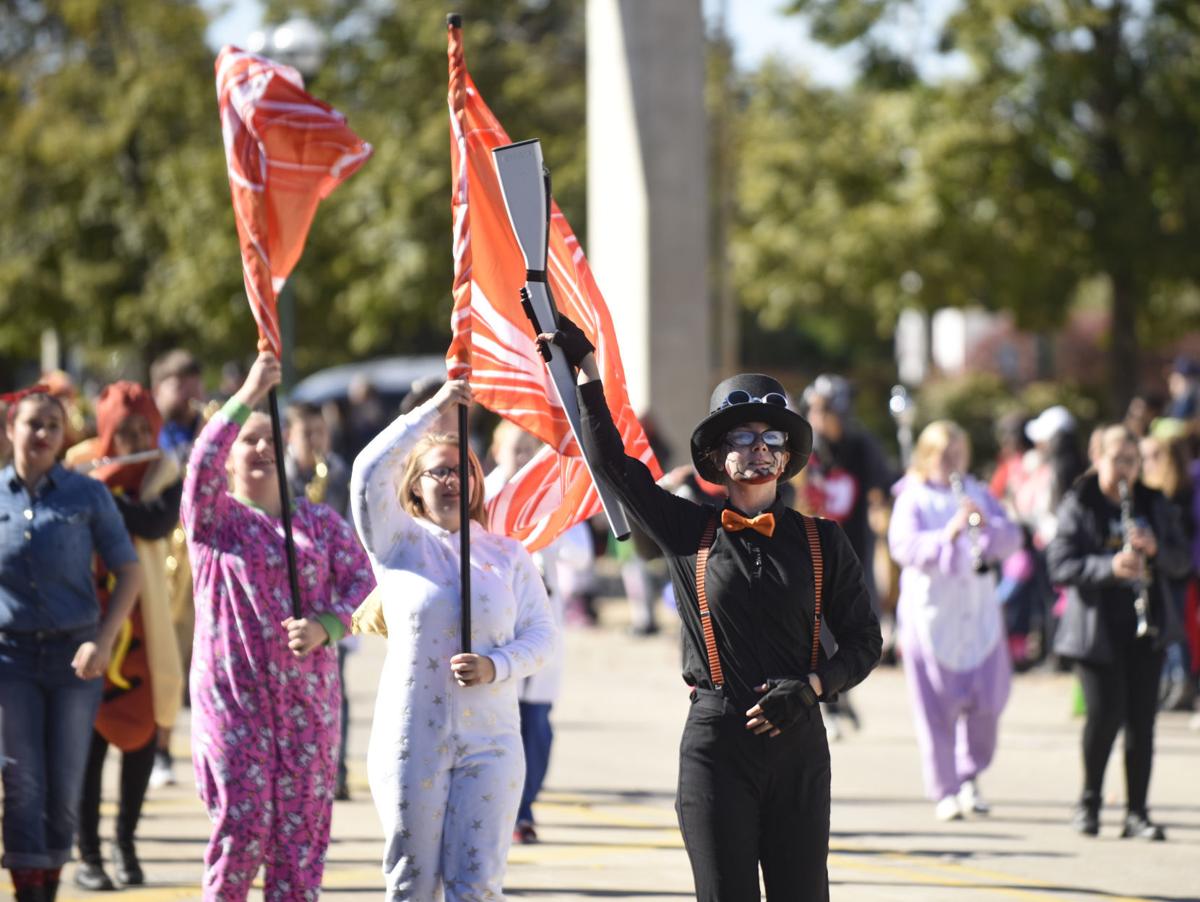 MOLINE — There was nothing scary about the sunny weather and cloudless blue sky Sunday afternoon as crowds lined River Drive and 5th Avenue downtown Moline for the Dad’s Club 51st annual Halloween parade.

Hosted by Moline Little League Softball, the parade began at 1 p.m. at the TaxSlayer Center. Lights, sirens and horns announced the arrival of the Moline Fire Department as they escorted a spooktacular array of floats sponsored by local businesses and organizations.

Children along the route scampered into the street as parade participants threw candy and colored beads.

The Moline High School band, the Marching Maroons, showcased an impressive drum line and musical talent. Band members got into the holiday spirit by dressing in Halloween costumes.

A giant sugar skull towered over paradegoers as the LULAC (League of United Latin American Citizens) float rolled by, accompanied by members dressed in Day of the Dead costumes with skeleton faces.

Aria Atkin, 3, came dressed as a witch and gathered her own collection of candy and beads. Her mother, Julie Atkin of Rock Island, wore large, spider earrings, signifying her mommy witch status.

“We try to be festive,” Atkin said. “We come every year. We liked all the bands, and the sugar skull float the best.”

“My favorite part is all the candy,” Carter Kelley said, opening a bag of Skittles.

Members of the Quad Cities Canine Assistance Network, a therapy-dog training center, walked in step with their student dogs, dressed up in spider, bumble bee and Maleficent costumes.

The Wilson Wildcats Middle School Marching Band got the crowd moving again while performers with Backstage Dance and Tumbling Studio were dressed as clowns and gave the audience a visual treat as they showed off their dance moves and tumbling skills.

Closing out the parade was Madison Andrae, 21, dressed up as a princess and riding her horse, Willie. Alongside them trotted her miniature horse, Daisie.

Moline resident, Abigail Yost, watched the parade with her children and her mother-in-law, Tarece Turner. Yost brought her 16-month old daughter, Leah Yost, dressed as a little pink piglet. Her son, Isiah, 3, was dressed as a wolf.

Yost said she and her husband also will be wearing pig costumes for trick-or-treating.

“We will be dressed as the three pigs and the wolf for Halloween,” Yost said.

'This is election tampering': Moline mailboxes filled with photocopied ballots

Moline resident Debbie Lord found an unwelcome surprise in her mailbox on Saturday — a photocopy of an official Nov. 3 general election ballot that had already been filled out.

CAMBRIDGE — A Colona man has been charged in Henry County Circuit Court with two counts of aggravated criminal sexual abuse.

East Moline police are seeking information in a weekend shooting that injured a 41-year-old man.

An arrest was made late Monday in an armed robbery in Rock Island.

A parked vehicle and home were hit by gunfire Saturday night in Moline.

A person was wounded in a Friday night shooting in Rock Island.

They are kneeling because they see a hurt in American society they want healed.

Illinois Quad-Cities authorities searched a property Friday as they continue to investigate the disappearance of Trudy Appleby.

Citing a spike in COVID-19 among students and staff, Moline High School is going to remote learning for the next two weeks.