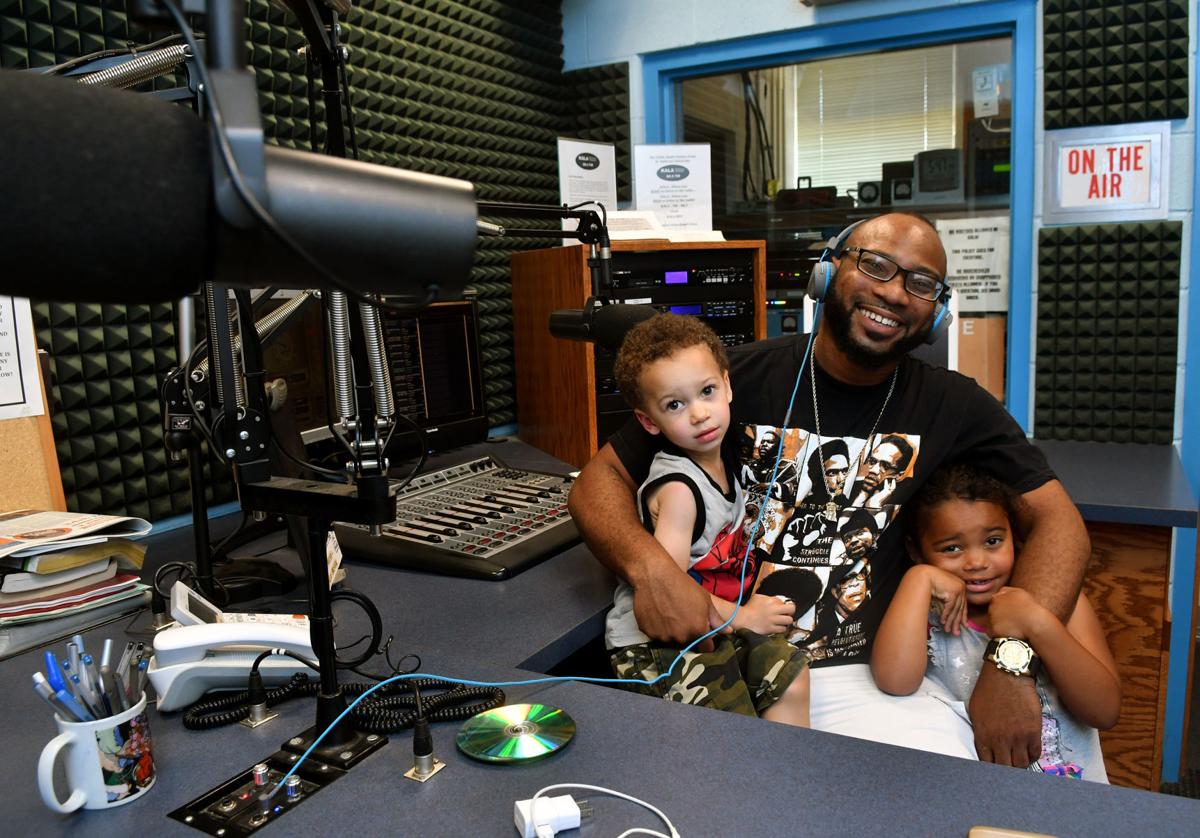 KALA-FM disc jockey Aaron Shivers of East Moline sits with his children, Levi, 4, and Lailah, 6, in the studio at St. Ambrose University, Davenport, on Monday, July 1, 2019. 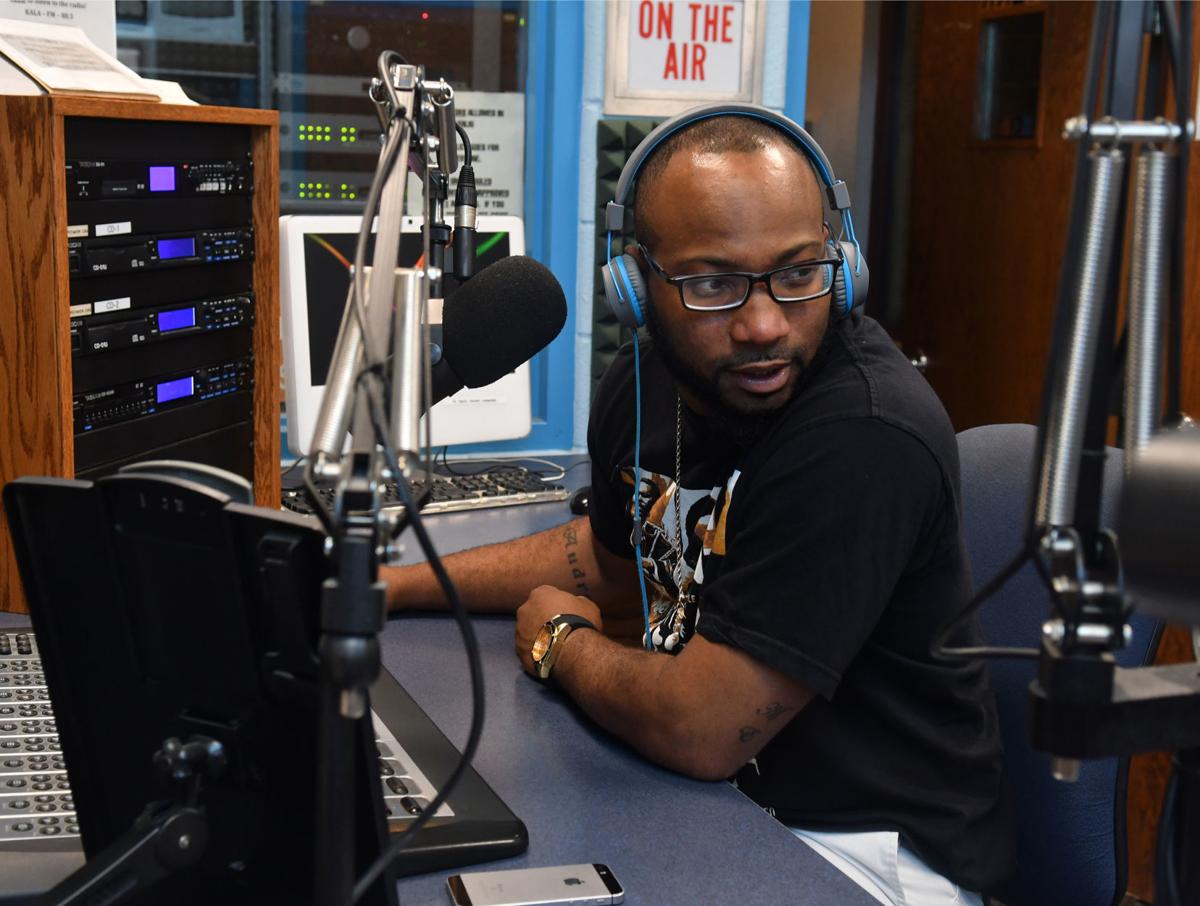 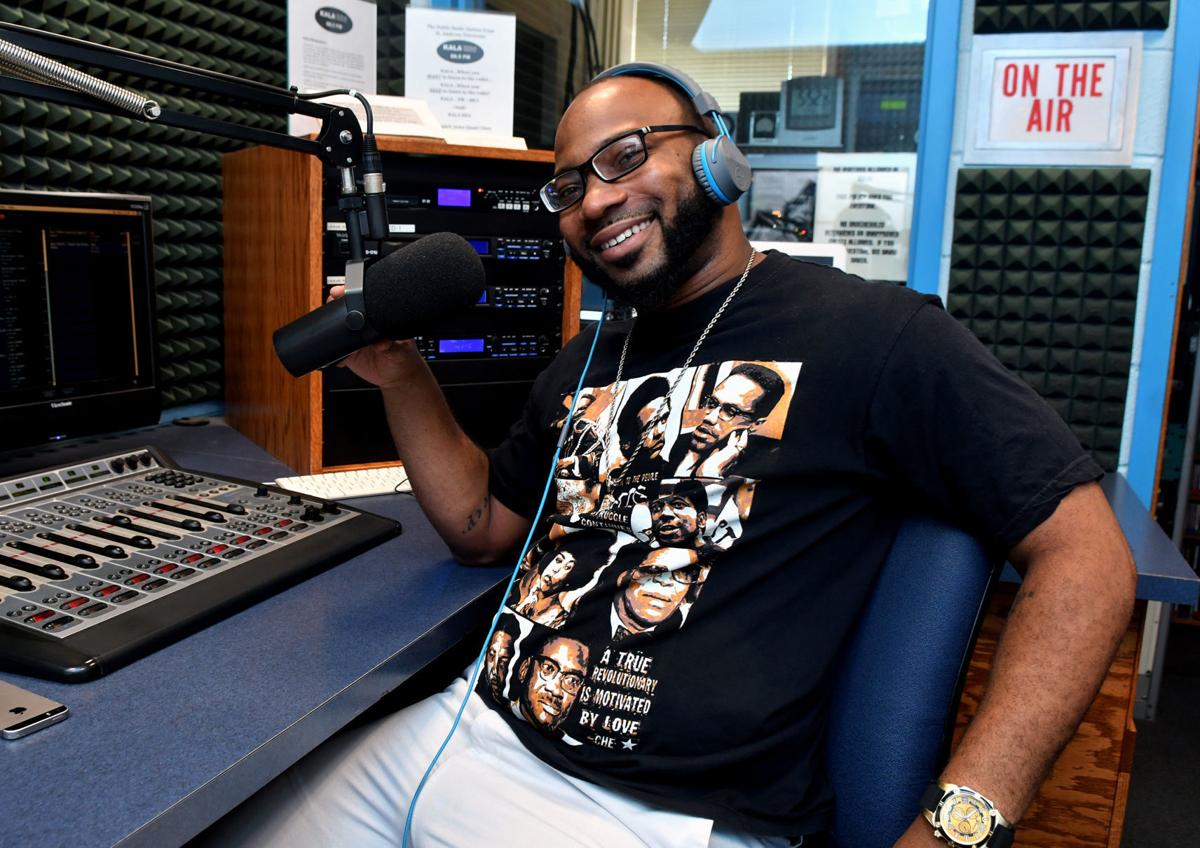 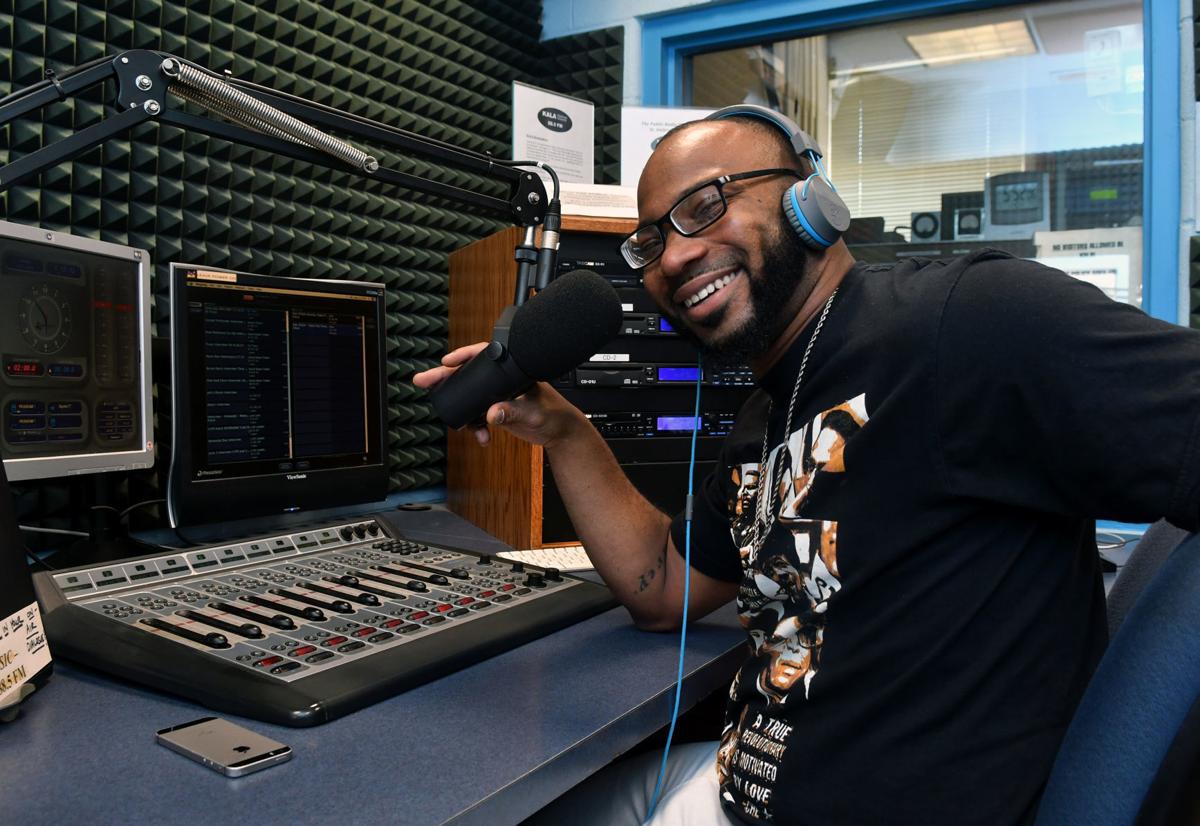 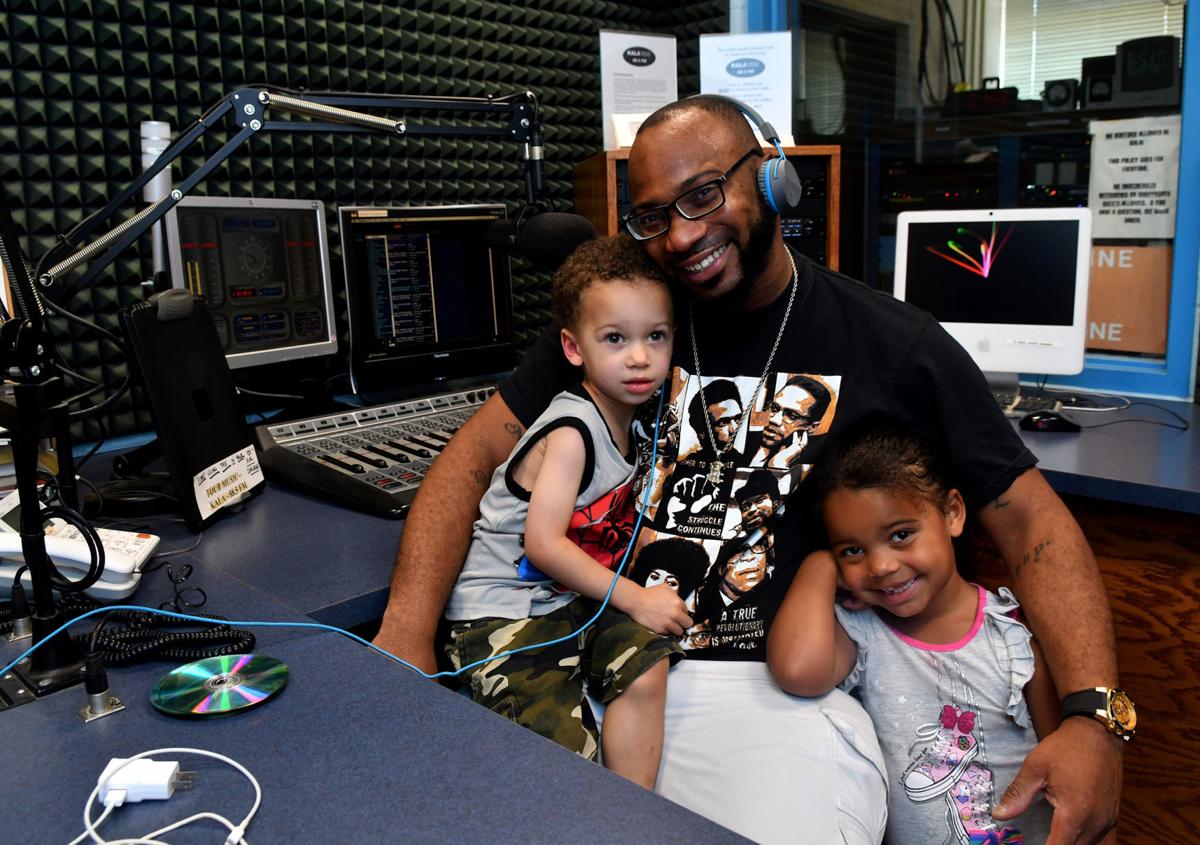 KALA radio DJ, Aaron Shivers of East Moline, with his children Levi 4 and Lailah 6, on the air, Monday, July 1, 2019 in Davenport. 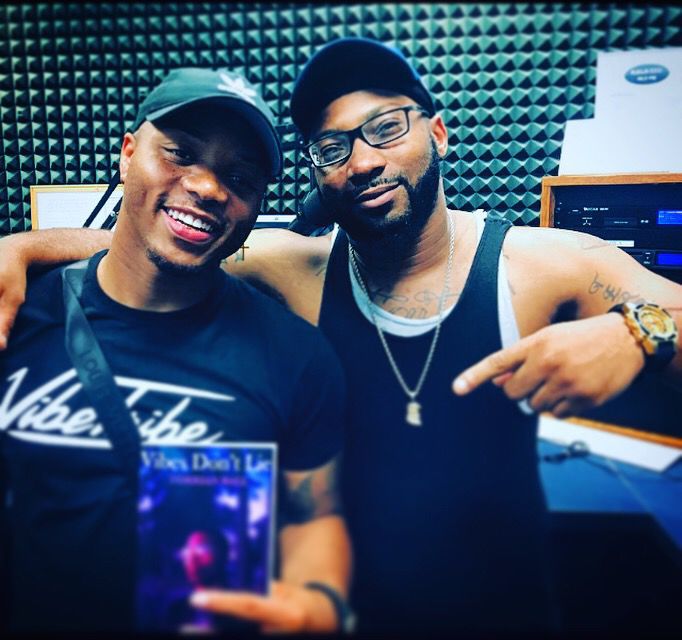 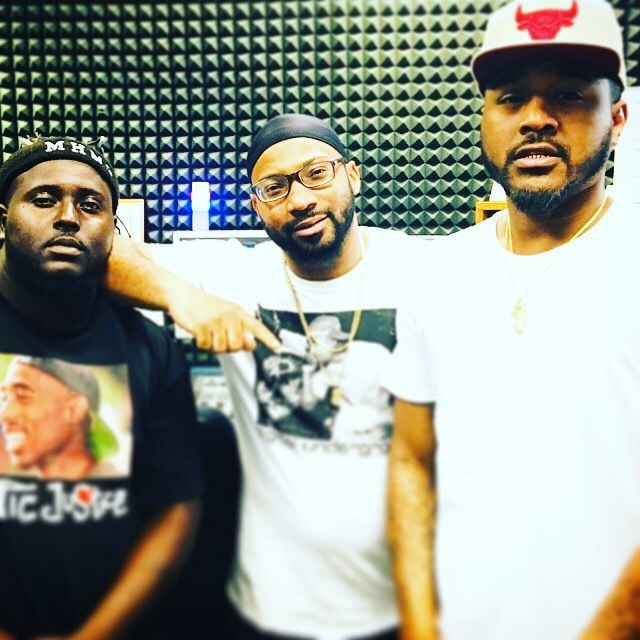 EAST MOLINE — Life can be stressful. Aaron Shivers makes it his mission to promote a “no-stress LYFE.”

The 30-year-old East Moline native founded a multimedia company under that name — LYFE stands for “living young feels endless” — a few years ago, and he works to spread positivity and motivation as a hip-hop artist, comedian, entertainer and disc jockey.

Since this spring, Shivers has hosted a weekly show on KALA 88.5 FM, based at St. Ambrose University in Davenport, called “Live, Laugh, Love.”

“It's all positivity, and it's just me trying to shine the spotlight on people that usually don't get the spotlight and definitely want to get it, especially small businesses, and small black businesses,” he said recently. “I want to give them a lot of recognition."

The format of the show, which airs from 6 to 9 p.m. Mondays, includes interviewing local hip-hop artists such as Torrian Ball, Christopher “lilfreshfatdude” McNeal and Demetrius “Pzy” Pena and playing some of their music.

"I want to get people ready for the week, see how everybody's weekend was,” Shivers said. “I'm about the no-stress life.”

He plays hits from any era since the '70s, “things people want to hear that other stations don't play around the Quad-Cities,” he said.

KALA general manager David Baker said by email recently: “Aaron (or Lyfe as he is known) offers a bright, fun program featuring contemporary urban music with a focus on the achievements of a lot of the local and regional entertainers we have here in the Iowa-Illinois area.

“He hasn't been on the air with this particular segment for very long, but during this time, we have welcomed around a half dozen local performers to the airwaves to showcase their music and to offer insight behind their artistry. We've actually had one guest from Sterling, Ill., too! So it's not just local Quad-City entertainers.”

The philosophy behind LYFE is “you're only as young as you feel,” Shivers said. “If you stay active, even if you can't do it physically. That's what the 'no-stress' brand is. If you're living like that, enjoying what you're doing, that's what it's about.”

“It reminds me to stay young in my mind,” he said, noting he had a great-grandmother who lived to age 107. “She was always young to me,” he said. “She was always moving around, always talking. Even when she was 90, she was taking the city bus places, young at heart.”

A 2007 graduate of United Township High School in East Moline, where he was a running back for the football team and homecoming king, Shivers was in a rap group during high school, and he sang in the choir at Mount Zion Baptist Church, where his stepfather, Rev. Kenneth Porter, is a pastor.  He's been involved in music since he was 15, and he plays trombone and drums.

Shivers played football at the University of Dubuque, where he was a business administration major with a focus on marketing.

He also worked as a DJ at KALA off and on from 2012 to 2015. He worked about 10 other jobs over the period of a few years, trying to put his business degree to use, and he recorded music in Chicago and Las Vegas. He's performed in Des Moines, Dubuque, Rockford, Chicago and Clinton.

He is the father of two — son Levi is 4, and daughter Lailah is 6. The kids primarily live with their mother in Dubuque. Shivers mainly sees them on weekends.

“I've had trials and tribulations,” he said. “I've tried to become your own boss, instead of waiting for a handout, waiting for somebody to do something for you; I have the initiative to do it for yourself. My problem was always game planning too much instead of executing. Now I'm more focused on executing everything.”

“I got my experience doing promotion, but after I did that, I came back (after Vegas) and was trying to find my way, exactly what I wanted to do,” Shivers said. “I know I can entertain; I've always been a popular guy. ... How can I turn this into some positive?”

He said KALA general manager Baker told him “there was kind of a lack of urban programming, young support around the community. It fell off from where it used to be. I always wanted to be in radio, but I felt other radio stations didn't fit me. I felt like 88.5 fits me; I can help, how they helped me have a platform and a voice.”

"In my 20s, I traveled with rap, hip-hop, struggling. I felt like I have to focus on something that's a bigger purpose than just making music. I think I have a bigger purpose, to send a message.”

Shivers has started merchandising No Stress clothing, and he hopes to start a No Stress LYFE record label. Right now he's working with Vasha Jones, an R&B artist out of Phoenix, Ariz., who is originally from Rockford. He's serving as executive producer of her album.

Shivers also would like to get into motivational speaking. “I want to bring the 'no stress' to the events, to the weddings, whatever the case may be,” he said.

His stepfather is 58 and is on dialysis to treat kidney failure. “That's another thing, trying to stay strong for him, continue the positive,” Shivers said. “Him and my mom, they definitely always gave me good advice."

That advice includes: “Never make an excuse; always handle your business no matter what,” Shivers said.

“The fact that he's still moving, staying positive, is impressive,” he said. “I want him to see all this.”

Three Moline men were arrested early Tuesday who were apparently out with the intent to contribute to recent civil unrest.

People from all walks of life gathered to condemn racism, with police and city leaders kneeling in solidarity with Black Lives Matter organizers.

2 dead, officer wounded in night of violence in Davenport

Two people are dead and a police officer was wounded in a round of rioting and violence that occurred Sunday night into Monday morning in Davenport.

KALA-FM disc jockey Aaron Shivers of East Moline sits with his children, Levi, 4, and Lailah, 6, in the studio at St. Ambrose University, Davenport, on Monday, July 1, 2019.

KALA radio DJ, Aaron Shivers of East Moline, with his children Levi 4 and Lailah 6, on the air, Monday, July 1, 2019 in Davenport.