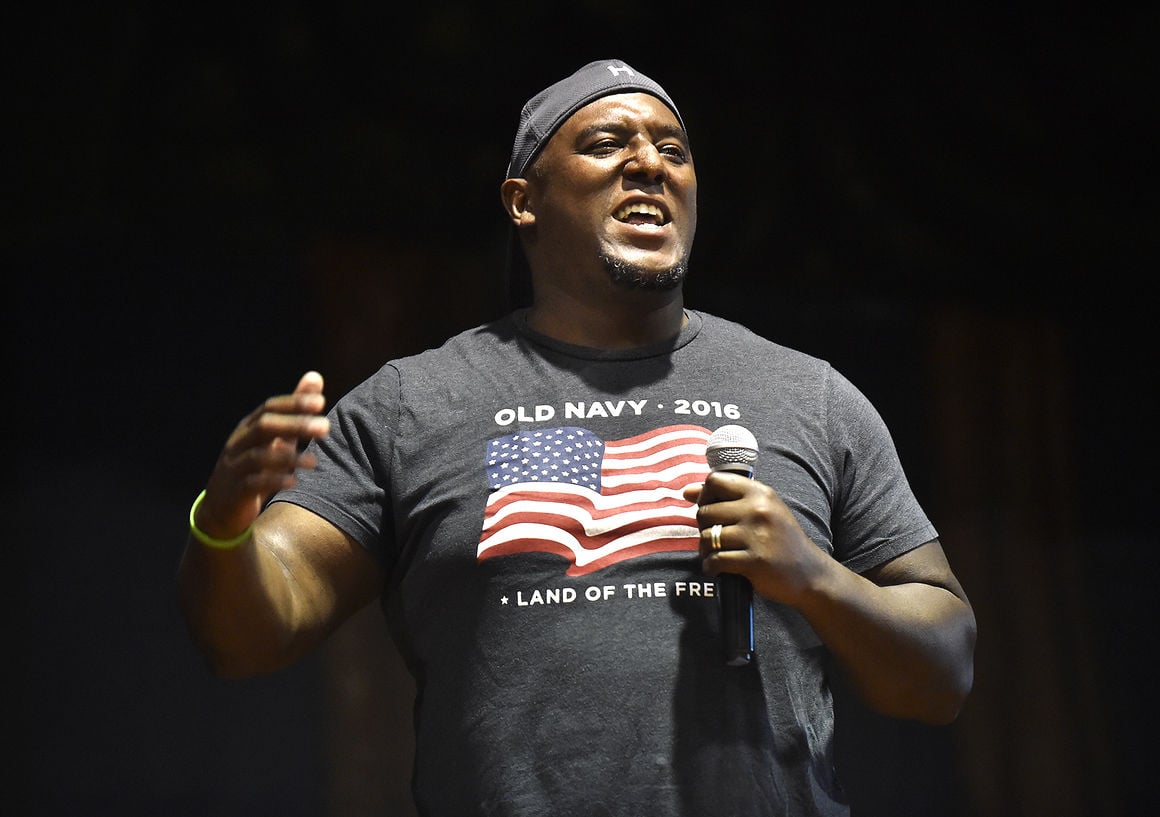 Motivational speaker and former NFL football player Harvie Herrington speaks with middle-school students at Riverdale Middle School about bullying and the positive effects of having dreams and goals Friday, Sept. 1, 2017, in the auditorium in Port Byron. 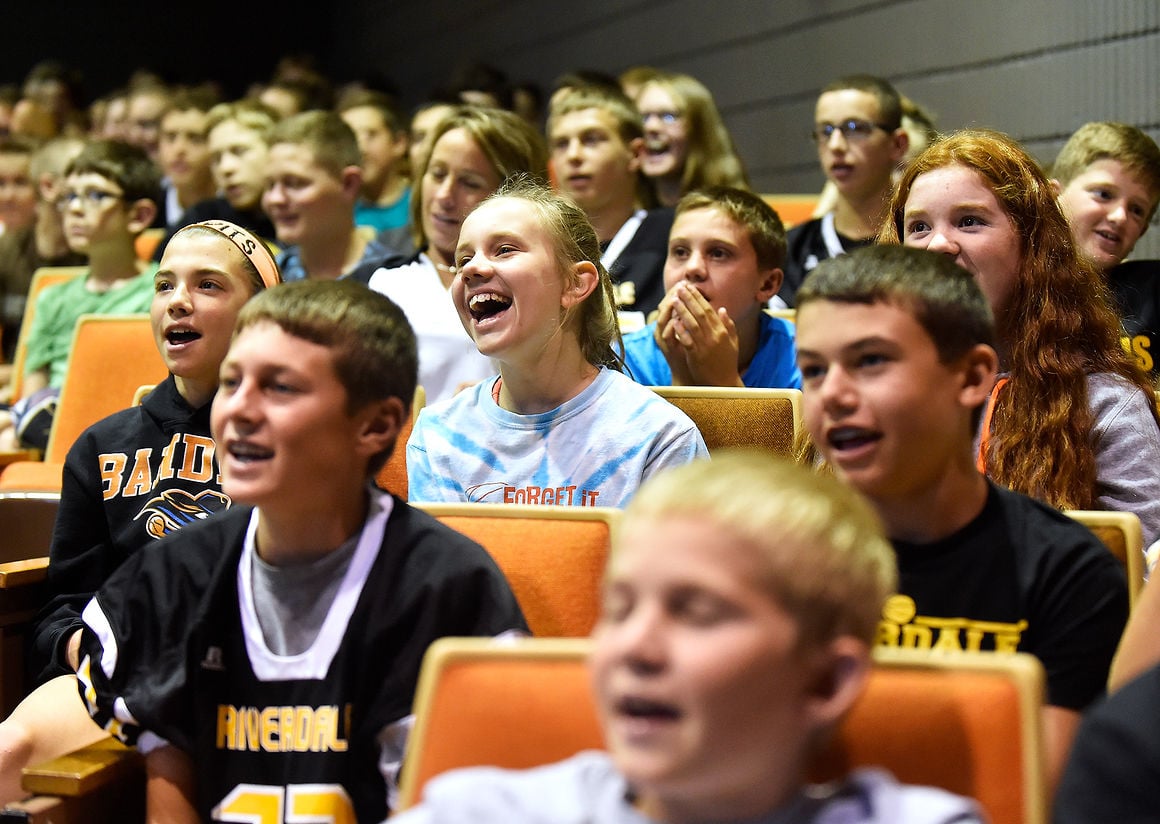 Abby Bollinger, 12, of Port Byron, yells and laughs as motivational speaker and former NFL football player Harvie Hrrrington urges the crowd of middle-school students to get loud Friday, Sept. 1, 2017, in the auditorium at Riverdale Middle School in Port Byron.

PORT BYRON — Giving two presentations at Riverdale Middle School last week, motivational speaker Harvie Herrington, a former pro football player, told students to discover their personalities and use them to their advantage, and to become leaders and team players.

"Hold onto your dreams," Mr. Herrington told the student body after being introduced by 13-year-old Carson Page, East Moline, president of F.O.R., the Riverdale club that sponsored Mr. Herrington's visit.

According to club adviser Casey Stichter, the group voted last spring to bring an outside speaker to the school to speak about bullying, respect and self-esteem. Club members chose Mr. Herrington to give classmates an opportunity to hear from a former professional athlete.

Mr. Herrington spoke to students about his own experiences. He was born in Mississippi and moved to South Chicago at the age of 7. From early childhood, football was Mr. Herrington's dream.

"This was an unlikely outcome for me. I was bullied as a child," Mr. Herrington said. However, he went on to be captain of both his high school football team and his college team at Western Illinois University, where he earned a bachelor's degree.

Mr. Herrington said he changed things when he was being bullied by speaking up and telling someone in authority about what was happening.

He said there are four types of personalities found in all schools.

"People are born that way, and all four traits have good and bad points," he said. "The D's are dominant and demanding, but leaders. The I's are inspiring but talkative, never knowing when to shut up. The C's are calculating, structured know-it-alls. Then there are the S's. Sixty percent of the S personalities were the shy, submissive types. At one time, I was an S.

"What I learned in my journey is that you are born with one trait, but you have to develop all four traits to be successful."

Mr. Herrington explained that holding onto his dream of football was important in his journey to leadership.

Mr. Herrington suffered many injuries while playing football, including debilitating back, knee and leg injuries. Despite the injuries, in 2000, Mr. Herrington tried out for his hometown Bears, and the team sent him to Barcelona under contract, with the guarantee that he would have additional training in the Bears training camp on return. After three days in Barcelona, he was sent to an Atlanta hospital for four months with a knee injury.

Still following his dream, he psyched himself up and entered arena football. He played for the local Steamwheelers in 2004.

Since that time, Mr. Herrington's career has included 13 years as owner and operator of Iron House Fitness and Tanning; three years as head coach of the Macomb Mayhem semi-pro football team; owner and operator of On the Island Nutrition Store; trainer and manager at North Side Gym (YMCA McDonough County); physical education teacher at St. Paul School in Macomb; fitness director at YMCA Two Rivers YMCA in Moline; owner of TGIA Fitness in Eldridge, Iowa; owner of HarPark Ent. Direct Marketing; and assistant coach for the Macomb High School football team for 17 years. He has a wife and four children.

In his second presentation of the day at Riverdale, speaking to eighth-grade athletes, Mr. Herrington told them how lucky they are to be participating in sports.

"It teaches you to push your own limits, gives you accountability, and helps you develop family and respect within your team. Sports teaches you not to be afraid to fail, and taking chances is what is needed to make you successful," he said.

Following both presentations, students were eager to come up and shake Mr. Herrington’s hand.

One month after a boat crash on the Mississippi River at LeClaire that killed two people, the Iowa DNR still is investigating what happened.

A Davenport doctor was disciplined. She was illegally prescribing drugs to another doctor — her co-worker/romantic partner.

A Davenport doctor's recent disciplinary action by the Iowa Board of Medicine is revealing another doctor's struggles.

Moline-Coal Valley school board president running for mayor of Moline

Sangeetha Rayapati has announced her candidacy for mayor of Moline for the April 6 municipal election.

'Major accomplishment' on new I-74 bridge

The driving surface for the new Iowa-bound span of the I-74 bridge is a wrap, but that doesn't mean the span is ready to open.

East Moline has The Bend.

East Moline has a new library to be opened sometime in 2021.

East Moline has The Quarter, an expansive potential development behind Deere Harvester near the river.

What it doesn’t have is anything that ties all those venues in the downtown area together.

Davenport Police found an unresponsive man in the roadway. He was pronounced dead at the hospital.

Davenport Police found an unresponsive man in the roadway in the 1900 block of 48th Street early Saturday morning.

A Davenport man broke a chair over a woman's back and her vehicle, and took a sledge hammer to her furniture during a domestic assault in May, according to court records.

A teenage girl from Bettendorf sustained serious injuries when she lost control of her car and it rolled into a ditch in the 18000 block of Great River Road (Highway 67) Friday afternoon.

WHAT WE KNOW: The district moved to a hybrid schedule composed chiefly of remote learning eight days into the new school year.

Motivational speaker and former NFL football player Harvie Herrington speaks with middle-school students at Riverdale Middle School about bullying and the positive effects of having dreams and goals Friday, Sept. 1, 2017, in the auditorium in Port Byron.

Abby Bollinger, 12, of Port Byron, yells and laughs as motivational speaker and former NFL football player Harvie Hrrrington urges the crowd of middle-school students to get loud Friday, Sept. 1, 2017, in the auditorium at Riverdale Middle School in Port Byron.