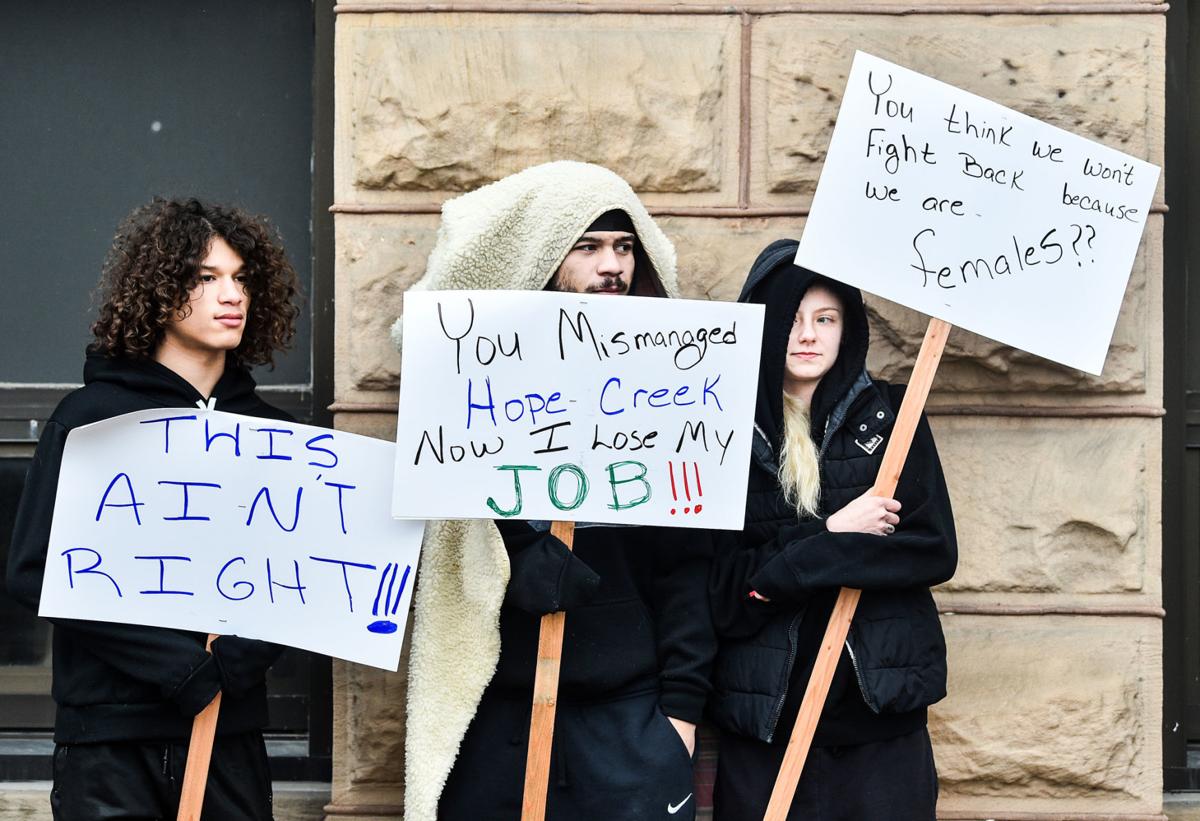 Samir Angel, 17, of Moline, Micheal Westbrook, of Moline, and Taylor Davis, 19, of Moline, participate in a protest regarding the sale of Hope Creek nursing home outside the Rock Island County Office Building Tuesday, Feb. 25, 2020, in Rock Island. 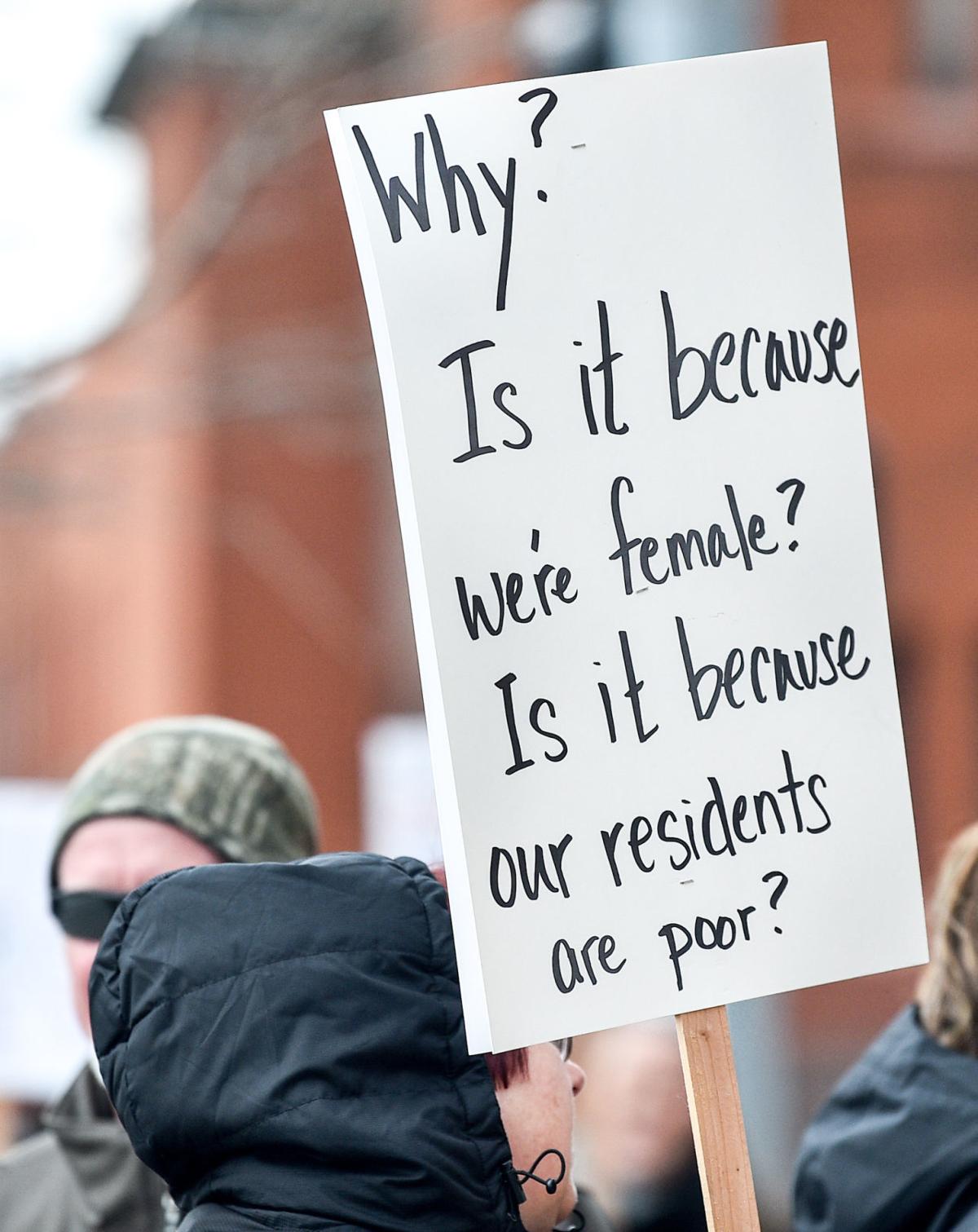 People hold signs during a protest regarding the sale of Hope Creek nursing home outside the Rock Island County Office Building Tuesday, Feb. 25, 2020, in Rock Island.

Rock Island County board members voted 17 to 5 to approve selling the county-owned nursing home at 4343 Kennedy Dr., East Moline, during a special board meeting Tuesday night.

Despite months of consistent pleas from Hope Creek residents, family members and employees not to sell the facility, the sale was narrowly approved with the minimum two-thirds votes needed to move it forward.

Dozens of people protested outside the county office building prior to the meeting holding signs reading, "Save Hope Creek," "The county is watching" and "Rock Island County mismanages Hope Creek; who's next?"

As the meeting got underway, public comments lasted more than 30 minutes from numerous county residents, most of whom took issue with Aperion Care, Inc., as the high bidder at $6 million, citing its reputation for poor care and numerous fines from the Illinois Department of Public Health among its 34 Illinois facilities.

Pam Skelton said she was there to speak on behalf of her mother, who is a resident at Hope Creek, and asked board members if any of them had visited the local Aperion facility, 430 30th Ave, East Moline.

"If you need to sell it, I don't have a problem with it as long as it's a good company. You all know Aperion is not a good company," Skelton said. "How many of you have actually walked through an Aperion building, talked to the staff and talked to the patients to see what kind of care they get? I know what kind of care they get because my mother-in-law is in an Aperion. If she's supposed to have a shower on Saturday, it might be Monday or Tuesday, or it might be 10:30 at night.

"You all know this is not a good company," Skelton said. "Are you going to take responsibility if our (families) are not being taken care of properly because you decided not to go through that building, this is the best offer, let's just sell it. If you have not taken time to talk to Aperion people and patients, you should not be voting on it. You should table it."

Kevin Johnson told board members both of his parents were residents at Hope Creek until their deaths in recent years.

"I found a place where they were treated with dignity and respect," Johnson said. "Hope Creek cared about them as though they were family. Rock Island County has a 180-year history of providing medical and mental care for taxpayers. I hope the county board does not take the easy way out. Don't give up and give away a majestic facility that others have worked hard to make happen. Do not let history show this county board made a bad decision and failed the residents of Rock Island County."

Hope Creek Activity Aide Angela Bernhardt told board members she has worked at the facility for 13 years.

"I've been through Aperion," Bernhardt said. I wouldn't even put my stray dog there, let alone a family member. Do you know where I would put my family members? Hope Creek, because I know they would be cared for."

Former Hope Creek Advisory Board member Gregg Johnson reminded board members of a promise they made when the facility was first listed, telling residents and their families they would not have to worry about a decrease in the quality of their care.

"The deal with Aperion is about as far as you could possibly get from fulfilling that promise," Johnson said. "The Aperion facility in East Moline recently had a resident walk right out the front door into sub-freezing weather and another strangled by their own bedsheets."

Johnson named several issues with Aperion nursing homes that makes most of them one-star facilities, including staffing shortages, delayed response time to residents with call lights turned on and meals that are often cold.

"If this sale to Aperion goes through, then the residents and their families were misled from the beginning," Johnson said. "This was confirmed recently when our county administrator (Jim Snider) and board chair (Richard Brunk) admitted to The Dispatch-Argus editorial board that Aperion's low rating and poor reputation was not even a consideration."

"This appears to be in conflict with the county's obligation to bargain with the union," Schmidt said. "It says you can't improve wages, you can't change any benefits until the time it is signed, which could take until August. That's a problem. You have a duty to bargain. Failure to do so will result in more legal challenges."

O'Brien asked if anyone was present from Aperion to speak, noting the board had not heard from any of the company's representatives. There was no one available at the meeting.

"About four years ago, we received unsolicited bids of $17 million," Mielke said. "At that time we were in the driver's seat. That would have been the right decision. Now we are in a different place. We are losing (up to $2 million) a year; it's a fire sale. I'm afraid if we don't make a decision, is this home going to be shuttered? That's a sad reality. I don't think anyone wants to sell this home. This is a very hard decision, it's an emotional decision, but it's the right decision."

"By statute, the most we can put on the tax anticipation credit card is $2.2 million," Swanson said. "We’ve now hit $1.9 million, meaning the borrowing capacity we have left is about one payroll. When that runs out, we start raiding the liability fund, which raises that levy and hikes tax bills. Talk of delaying the sale for another buyer who may or may not come forward is a delay tactic in a situation that can no longer (be) delayed."

"We are up against a wall," Sargent said. "Do we sell it or do we close it? Nobody wants to see that facility closed. What I'm hearing from the community, is not so much the fact of selling it, but who we are selling it to."

Nine Democratic candidates running for four contested seats on the Rock Island County board participated in a forum Monday night hosted by the NAACP.

Nine Democratic candidates are vying for Rock Island County Board seats in four districts in the Illinois primary election. There are no contested county board races on the Republican ballot.

A decades-old lien on the property where Hope Creek Care Center was built could be a problem for Rock Island County as it tries to close on the sale of the facility.

Some Hope Creek employees to receive bonuses to stay on

Hope Creek Care Center will not be sold to Aperion Care.

Hope Creek Care Center to be sold to Infinity Health

Rock Island County is in the final stages of approving a contract to sell Hope Creek Care Center to Infinity Health Care Management for $4 million.

Nine months after being put on the market, Hope Creek Care Center is being sold to Infinity Health Care Management for $4 million.

Hope Creek sale may be approved next week

Finalizing the sale of Hope Creek Care Center may be voted on during next week's county board meeting.

'It's time for the county to make some difficult decisions': Rock Island County officials say Hope Creek must be sold or risk closing

Aperion Care, the nursing home chain in talks to buy Rock Island County's Hope Creek Care Center, was fined $366,800 by the Illinois Department of Public Health in 2019 across its 34 Illinois facilities, including a $50,000 fine at the Forest Park location after the body of a 64-year-old man with dementia was found in a river after he fled the facility.

Residents confronted Rock Island County board members Tuesday night, asking them not to sell Hope Creek Care Center to Aperion Care, Inc., a nursing home corporation that is frequently cited and fined by the Illinois Department of Public Health.

County officials have confirmed an offer of $6 million for Hope Creek Care Center from Aperion Care, Inc., a Chicago-based nursing home chain with 34 locations in Illinois, including one in East Moline.

Would you sell your house for a third of the list price?

Rock Island County board members are in discussions over an offer of $6 million for Hope Creek Care Center from Aperion Care, Inc, a nursing home chain based in Chicago.

Lien dispute not quite done just yet in East Moline

The battle is not quite over as far as East Moline First Ward Alderman Larry Toppert is concerned.

In what was just the first reading of Ordinance 20-04, releasing a utilities connection lien on the property where Hope Creek Care Center was built, Toppert was the lone no vote in a 5-1 tally with one alderwoman absent.

Samir Angel, 17, of Moline, Micheal Westbrook, of Moline, and Taylor Davis, 19, of Moline, participate in a protest regarding the sale of Hope Creek nursing home outside the Rock Island County Office Building Tuesday, Feb. 25, 2020, in Rock Island.

People hold signs during a protest regarding the sale of Hope Creek nursing home outside the Rock Island County Office Building Tuesday, Feb. 25, 2020, in Rock Island.