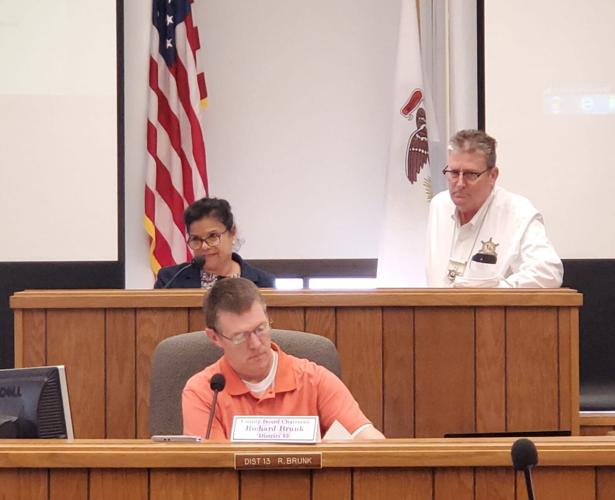 Rock Island County Treasurer Louisa Ewert and Coroner Brian Gustafson made a pitch to county board members for 7% pay increases for six elected positions, including theirs, during the May 11, 2022, meeting as board co-Chairman Brian Vyncke moderates comments from members. 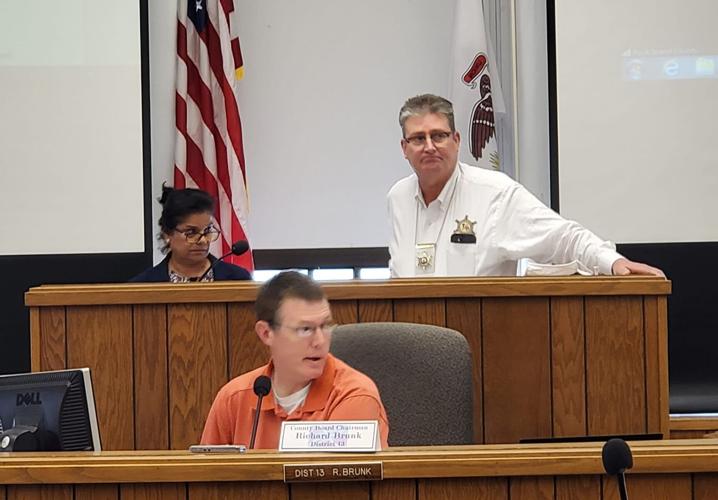 Rock Island County Treasurer Louisa Ewert and Coroner Brian Gustafson made a pitch to county board members for 7% pay increases for six elected positions, including theirs, during the May 11, 2022, meeting, as board co-Chairman Brian Vyncke moderates comments from members.

Six Rock Island County elected officials are asking for a 7% pay increase that would put their salaries in the neighborhood of $100,000 per year.

The elected positions that would receive raises include the county treasurer, clerk, coroner, auditor, circuit clerk and recorder.

Rock Island County Treasurer Louisa Ewert and Coroner Brian Gustafson made a pitch for the pay raises to county board members during their committee of the whole meeting Wednesday night. County board members will vote whether to approve or reject the proposed wage increases during the May 17 regular meeting.

Ewert said her salary has been frozen for nine years. As a result, she said, "Sometimes the (county) employee is actually outpacing the elected official's salary by one third."

"Their salaries include step increases," Ewert said. "I think our resolution is very conservative."

"It took 10 years to get to where you're at right now, so why are we going to fix (your salary) in one year?" County Board Vice Chairman Brian Vyncke said. "Something we have to be cognizant of is that nobody else in the county got a 7% increase this year. The other issue is that there is a term called pension spiking. Honestly, a 7% bump for anyone that is going to retire in the next couple of years is what I would consider a pension spike."

Vyncke was referring to the process whereby public sector employees artificially inflate their compensation immediately preceding retirement in order to receive larger pensions than they otherwise would be entitled to receive.

Ewert said she would not personally benefit from an approved raise since she announced in July that she would not run for reelection and planned to retire before the pay raise would take effect.

"But there are other people," Vyncke said.

Salaries for elected officials must be set by the county 180 days before the election for those offices. The offices of treasurer and county clerk will be up for election this year in the Nov. 8 general election.

Salaries for the offices of coroner, circuit clerk, auditor and recorder do not have to be set for another two years, but those officials are asking for their pay to be increased and set in advance of this year's election. If approved, the four positions up for election in the 2024 general election would not receive their pay raises until that time.

"If it is said that the county board was approached with a request for a 7% increase, and they granted it, there won't be anyone reading past that first paragraph to see that it would freeze in year two, be attenuated in year three and approached again in year four," county board member Kai Swanson said. "I want to get you where you want to be with these proposals by year four, but I think it's more prudent to do so in a more amenable fashion."

Sheriff and state's attorney salaries are set by the state and partially reimbursed back to the county, Vyncke said.

"I agree that the initial, upfront 7% increase is concerning," said County Board Chairman Richard Quijas Brunk. "Regardless of the full explanation and how it breaks down over four years, the 7% increase is all that anyone is going to latch onto. Whether it's county employees who didn't get anywhere near that ... they're not going to read anything beyond that.

"We've been very fiscally responsible, I would say, when it comes to our planning and finances," Brunk said. "To put something to paper through 2027 is a little concerning."

Brunk said even if board members approved the increase during next week's meeting, future board members could undo the pay raises for the four officials who are up for reelection in 2024.

Board member Luis Moreno said it was important to note it is the position that would receive the raise, not the person. He cautioned that someone could be elected to a position with no experience and benefit from that higher salary.

Board member Robert Westpfahl asked why the salaries of union members were discussed in closed session but the elected officials salaries were being discussed in open session for the public to hear.

Brunk said according to Illinois' Open Meetings Act, compensation for elected officials was not allowed to be discussed in closed session.

Vyncke stressed that compensation for county board members would not be changing, making it 10 years since raises were last approved for those positions in 2012.

"This board is not getting any increase — for the record — even though all the other county employees and elected officials may," he said. "Kudos to the county board for keeping us where we are at."

The city acquired the Heritage Church property Bridgepointe 485, which sits directly next to the old I-74 bridge. The city purchased the property for $3.1 million.

Growing Pains: Moline to update plans for development south of the Rock River

Developing south of the Rock River has been a longtime goal for growing Moline since the 1990s.

WHAT WE KNOW: Colona city officials are projecting a 15% decline in state revenue for the coming fiscal year.

In their first debate of the general election, the candidates for Iowa’s 1st Congressional District made bipartisan appeals as they each seek to represent southeast Iowa.

The candidates seeking to represent Iowa in the Senate are making their case as the best representative of the state's farmers.

Davenport's final vote on eliminating one-way traffic in downtown Davenport will be next Wednesday. Alderman JJ Condon told council members he was considering introducing an amendment to extend the conversion's end to Division Street.

DeJear aims to unite generations of Iowans in governor’s race

IOWA CITY — Iowa Democratic gubernatorial nominee Deidre DeJear said she is fighting to bring Iowans together — young and old, Democrat and Republican — at a time when divisive policies over school choice and abortion and transgender rights are pitting communities against one another.

A 'beacon along the river': Figge hopes to make building a light sculpture on the Mississippi; city plans riverfront 'experience zone'

The Figge Art Museum architect originally intended for the all-glass Figge building to glow with man-made lights after nightfall.

Rock Island County Treasurer Louisa Ewert and Coroner Brian Gustafson made a pitch to county board members for 7% pay increases for six elected positions, including theirs, during the May 11, 2022, meeting as board co-Chairman Brian Vyncke moderates comments from members.

Rock Island County Treasurer Louisa Ewert and Coroner Brian Gustafson made a pitch to county board members for 7% pay increases for six elected positions, including theirs, during the May 11, 2022, meeting, as board co-Chairman Brian Vyncke moderates comments from members.