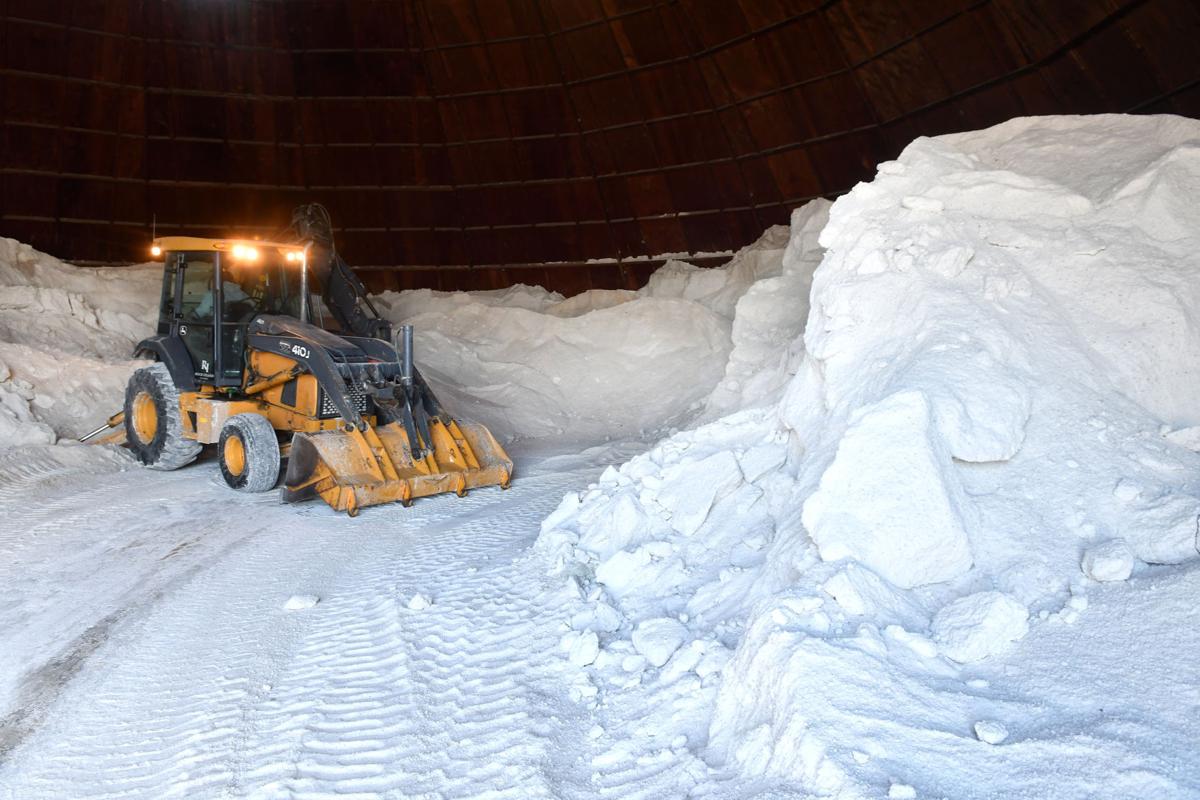 A City of Rock Island backhoe loader breaks up clumps of salt Tuesday at the Rock Island's salt storage dome at 1309 Mill St. 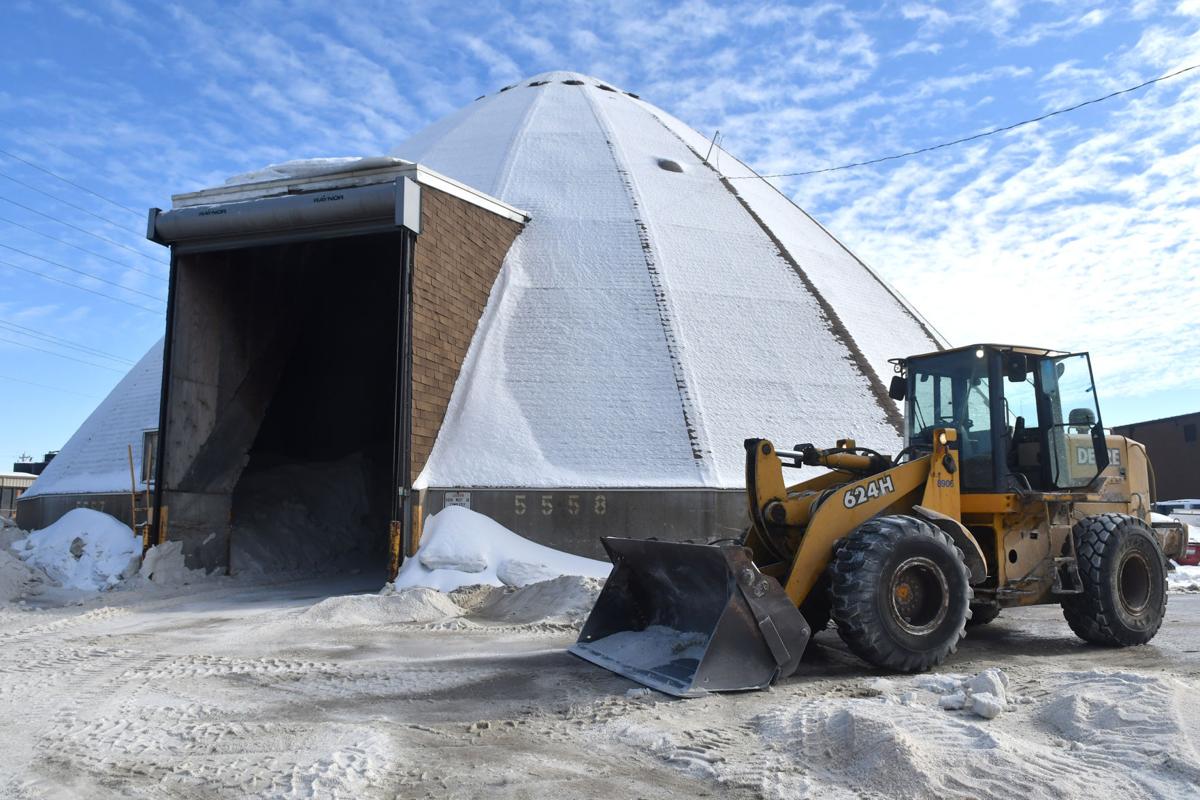 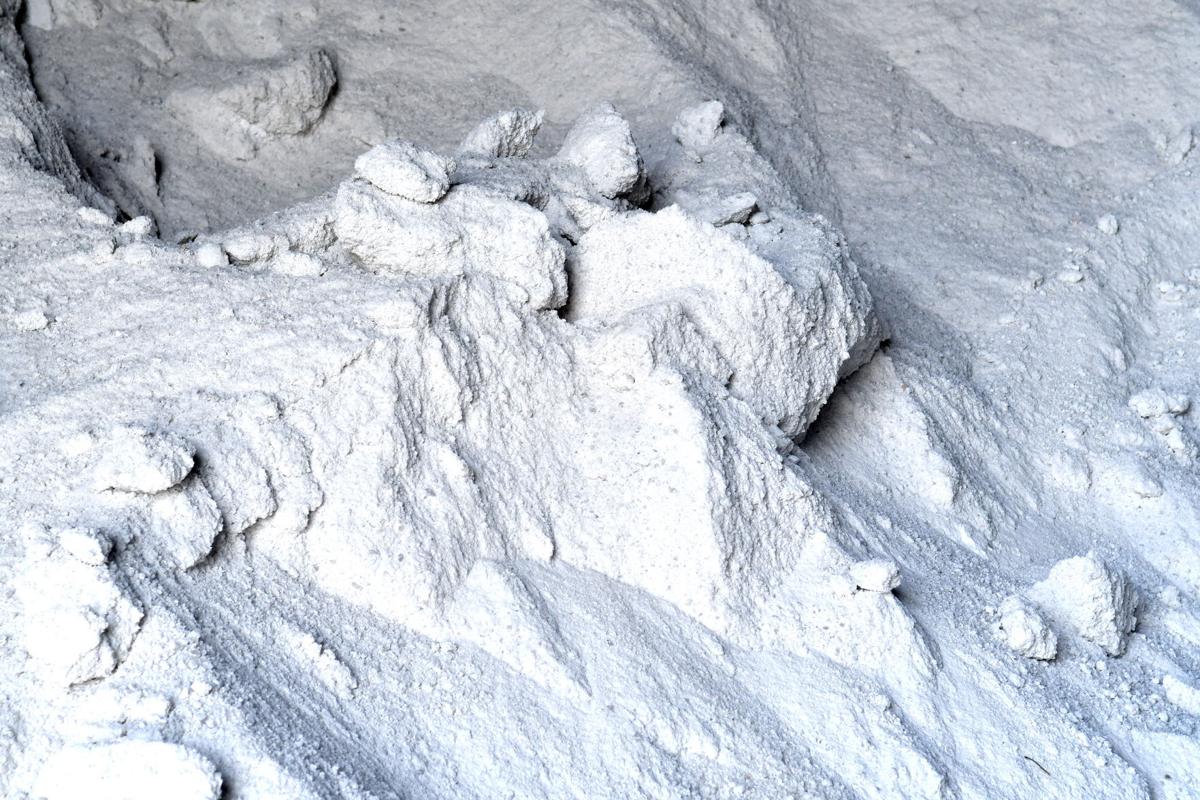 Weeks of extreme weather with snow and ice accumulation has caused area cities to exhaust their salt supplies.

Moline ran out of rock salt Monday night, forcing the city to call on Rock Island to loan it several loads until it received more.

Rock Island Public Works Director Mike Bartels said Moline was "waiting on deliveries from suppliers that have been slow to receive."

Moline Interim City Administrator Marty Vanags said salt supplier Cargill/ADM "had truck trouble yesterday and didn't get material delivered to us over the weekend from their terminal."

Vanags said the city reached out to East Moline first, but it did not have enough salt to loan to Moline. He said Rock Island loaned 30 tons to Moline to help it get by until ADM was able to deliver two truckloads from its terminal.

Vanags said the city started this winter season with 3,800 tons of rock salt, which is typical for a winter season.

"It looks like we will be using more this season," he said. "We'll have to see how the rest of the season goes.

"We are constantly striving to keep our supplies of salt and other material on store and ready for snow emergencies. We work closely with the other communities and agencies to help each other if something like this happens. We were never concerned that we wouldn't have enough salt based upon the supplies and weather forecast and the salt on order.

"Now that Cargill has their trucks working we should be set for the rest of the winter."

Vanags said the city contracted with Miller Trucking and Excavating and Coopman on Tuesday to supplement its regular order in preparation for another storm in the forecast for Thursday.

"During this process we also talked to Silvis and Rock Island County. They are both very low on salt. Silvis has no more on contract to receive; they are looking for some alternative options. Rock Island County is also having trouble with deliveries like most of us."

"Moline and Rock Island have always helped each other out when needed, and we are happy to continue this," Bartels said. "Once Moline starts receiving salt deliveries they will return the amount they used."

Salt supplies are running low for other cities, too. East Moline City Administrator Doug Maxeiner said the city was in a "similar situation to Moline. We have deliveries on order, but (it's) pretty scarce at the moment."

Todd Stickler, director of maintenance services for East Moline, said the city started the year with 3,000 tons of salt.

"We ordered 1,800 tons additional — including 500 tons we're waiting to be delivered," Stickler said. "We have approximately 250 tons left in the salt dome now."

The extreme weather has also been burning through Bettendorf's road salt supply.

On average, the city uses about 4,500 tons of salt in a typical year, Brian Schmidt, public works director, said.

The city began the season with about 7,300 tons, "but with all of the snow and ice events that we were experiencing early on, we quickly realized that we were going through salt at a higher rate than in previous years," Schmidt said.

"In January we ended up ordering another 1,000 tons from the Iowa Department of Transportation to ensure we had enough to sustain us through the rest of the year."

As of Tuesday, the city had used about 5,575 tons in 14 "call out" events, or times plows were called out for ice and snow.

That leaves about 2,725 tons for the remainder of the season.

Two supplemental salt orders have been placed, with the city purchasing about $820,000 worth of new salt this year.

"Once those are fully delivered, we do expect to still have around 9,000 tons (of salt) on hand," Davenport Public Works Director Nicole Gleason said.

By comparison, the city went through 9,500 tons of salt last winter and logged 6,000 hours of labor clearing city streets.

"This season started out very smooth, with little to no snow in November and December," Gleason said. "The slush, ice, snow storm on Dec. 29 created a challenge that we are still feeling the impacts from. That original ice bonding to the pavement on many residential roads never melted and is nearly impossible to cut without a motor grader.”

In all, Davenport has seen 35 inches — or just shy of 3 feet — of snowfall in the past seven weeks, "so new snow does not have a place to go," Gleason said.

"When we plow; snow is getting pushed against the old piles, which is frustrating for everyone. We appreciate the public’s patience as we work towards warmer temperatures."

WHAT WE KNOW: Past Geneseo councils have discussed video gaming and ruled it out for the city.

It's final. Closing time for bars in the city of Rock Island will permanently change from 3 a.m. to 2 a.m.

In what could be a foreshadowing of national fault lines in the Republican Party, a pro-Donald Trump Republican announced plans on Wednesday to challenge one of the former president’s most vocal critics in Congress, Illinois U.S. Rep. Adam Kinzinger.

A Moline city council member has issued a public apology after city officials alleged recently that former senior staff members were unprofessional, incompetent or destroyed work documents during their employment with the city.

The state of Illinois expanded its COVID-19 vaccination eligibility Thursday to include people younger than 65 with conditions that would put them at higher risk of COVID-19 and those with disabilities. The move comes one day after the state set a new record for COVID-19 vaccinations.

Tuesday's Democratic primary election for Silvis mayor will feature two public servants to the city: Current Mayor Matt Carter, who is running for reelection; and longtime City Administrator and Public Works Director Jim Grafton, who is ready to retire and take on a new role.

A City of Rock Island backhoe loader breaks up clumps of salt Tuesday at the Rock Island's salt storage dome at 1309 Mill St.