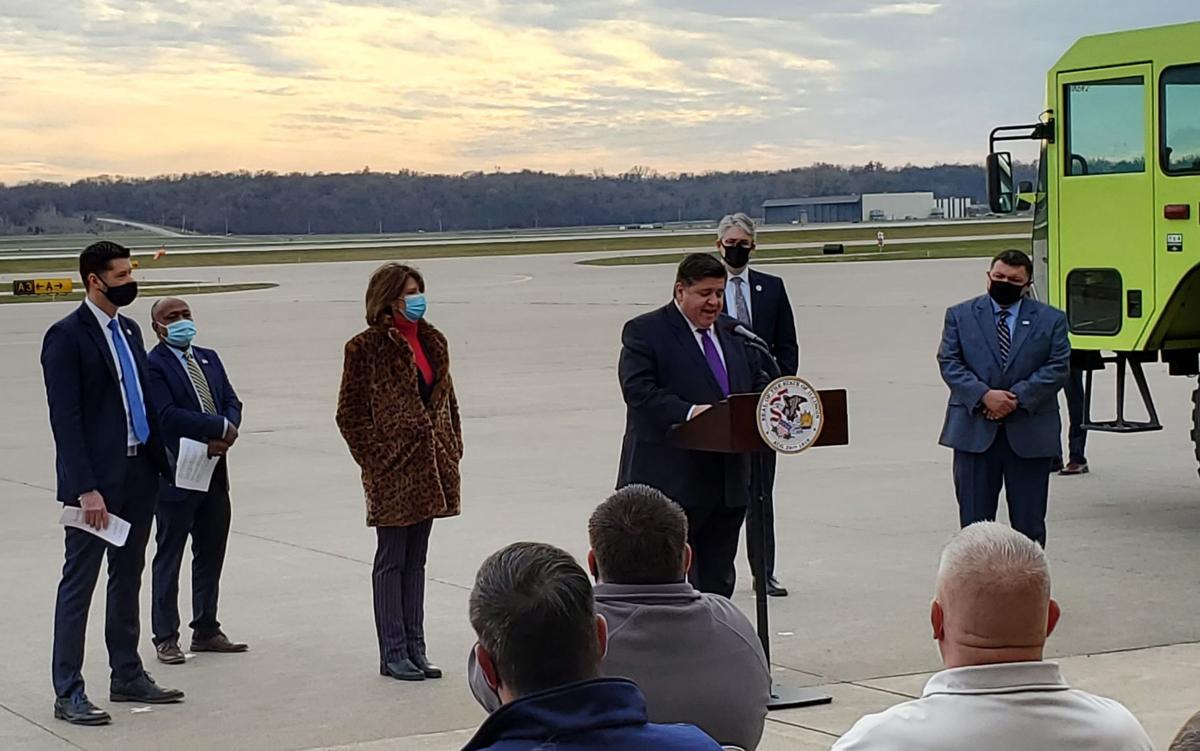 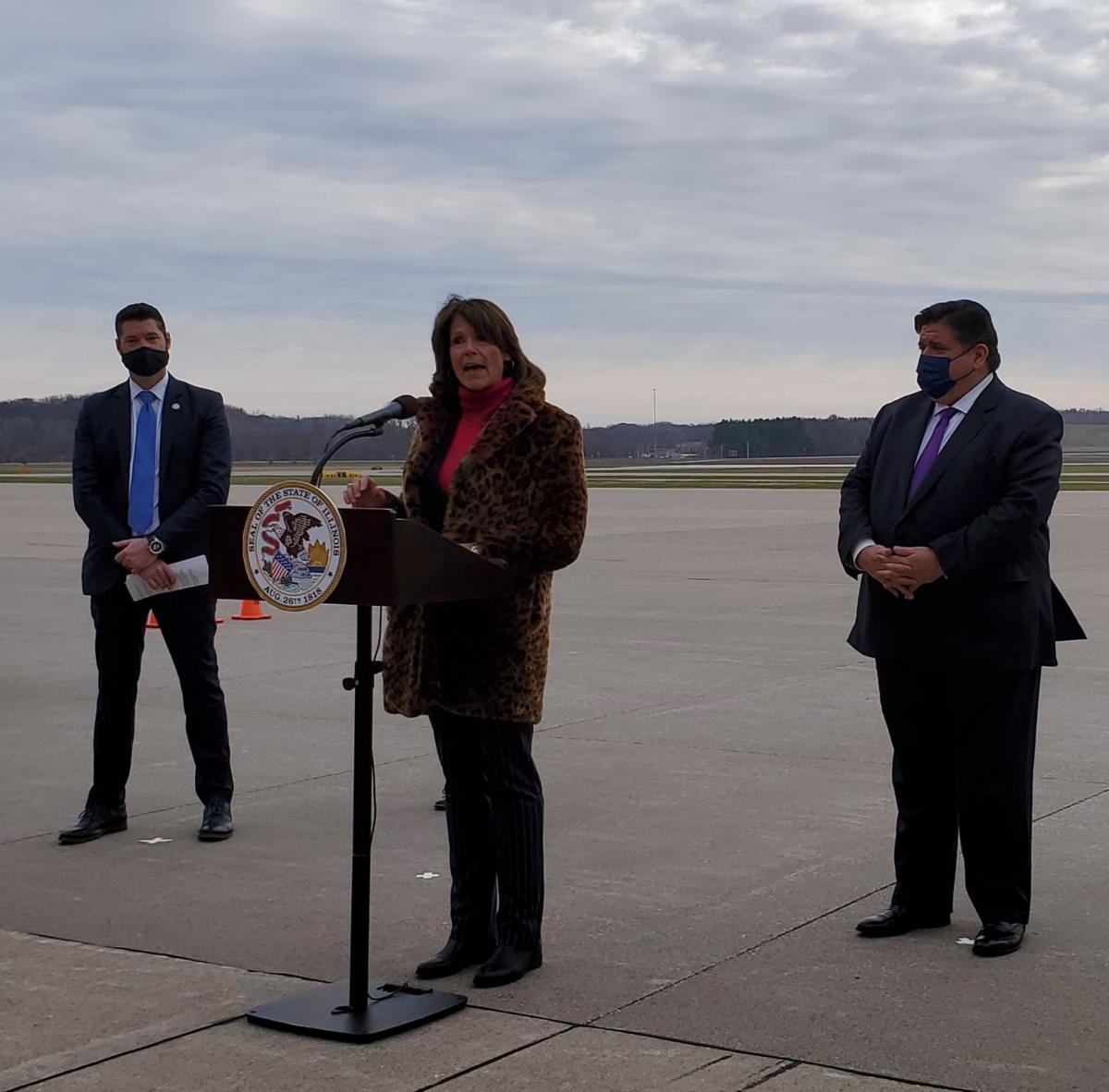 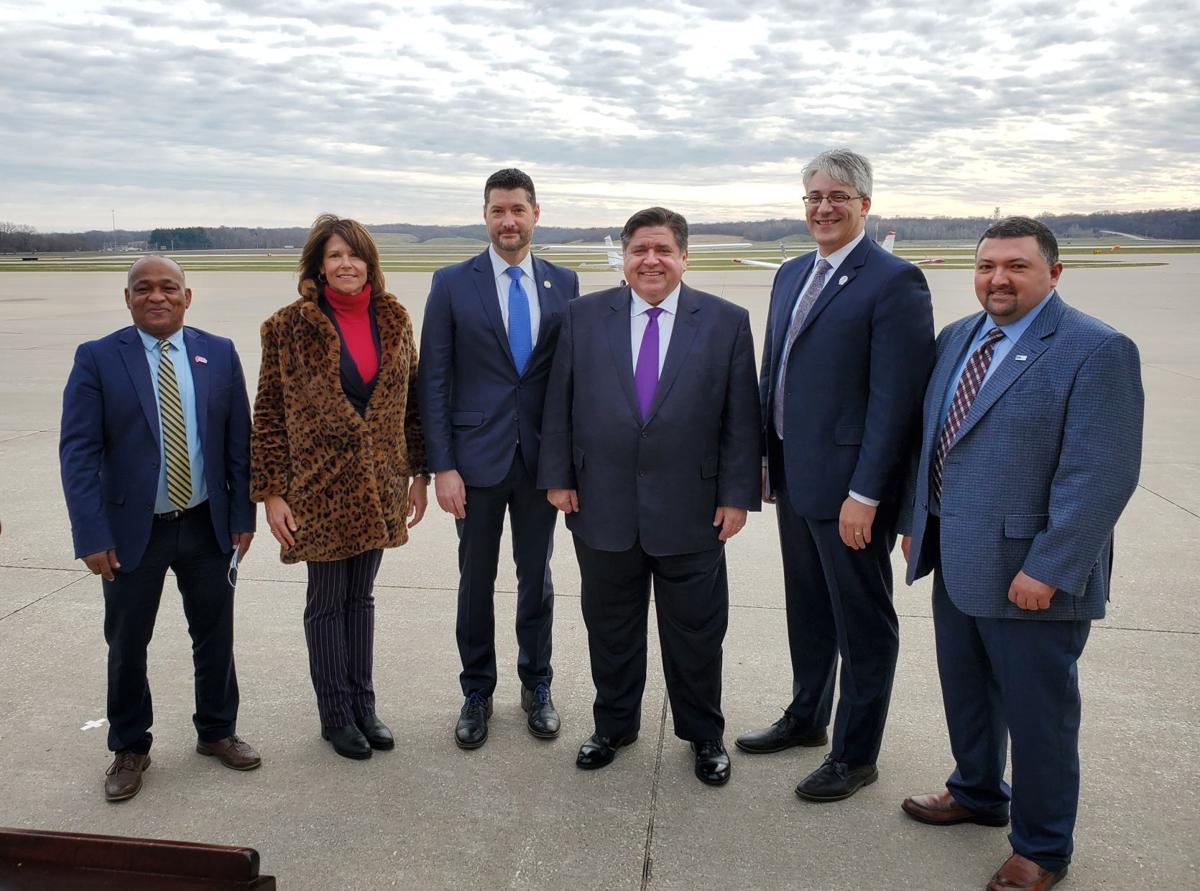 The Quad Cities International Airport will receive $5.6 million in state funding for infrastructure improvements, with $3.3 million for entrance road realignment and $2.3 million for aircraft parking expansion.

Pritzker credited Bustos and Halpin for their work in passing infrastructure legislation and advancing projects in the area.

"We are a stronger state because of the work that you have done at the federal level and at the state level on behalf of the Quad-Cities," Pritzker said. "Even before the federal infrastructure bill that Congresswoman Bustos helped secure for all of us, Mike Halpin was working with his colleagues in the state legislature and with me to invest in the most robust upgrade of infrastructure in Illinois' history.

"Our vision wasn't simply limited to updating highways, waterways and bridges, we saw an opportunity to connect jobs and economic development to communities across the state."

Pritzker stopped at the airport on his way out of town after attending the opening of the public celebration of the $1 billion I-74 Bridge.

The $5.6 million airport investment is a portion of $94 million awarded to public airports throughout the state from the $33.2 billion Rebuild Illinois capital improvement program passed in 2019. The funding represents the largest statewide capital investment program for airports in state history.

Bustos said the $1.2 trillion infrastructure bill signed by President Biden two weeks ago guarantees Pritzker will be back in the Quad-Cities more often as projects are announced.

Osman said airports can be "the economic engine that drives a region." He said $150 million of Rebuild Illinois funds were earmarked for airports and applauded the competitive grant process through the Illinois Department of Transportation.

"We went looking for ideas from our aviation partners on how best to improve our facilities," Osman said. "Under this governor, more than ever, IDOT is relying on input from our communities to tell us where the public resources should be invested. It is a smart way to do business.

"Under Governor Pritzker and Rebuild Illinois, we have positioned the state to do great things."

Getting a look at the new I-74 Bridge

WATCH NOW: She was scared of heights...for a week

Cement finisher Sabrina Duncan, of Union Local 18, talks about her fear of heights when she first started working on the new Interstate 74 bridge.

Tracy Hill, of Davenport, couldn't contain her excitement while walking on the new I-74 Bridge on Wednesday.

Patrick Fisher, of Bettendorf, couldn't resist the chance of a lifetime to walk, and have a little fun, on the new I-74 bridge.

WATCH NOW: "We can do great things together"

Doug House, Deputy Secretary - Illinois Department of Transportation has followed the new bridge's construction since its inception, and says …

WATCH NOW: I-74 event lets "the spectators" soak in the bridge's majesty

Marco Rocha, of Rock Island, says the I-74 Bridge celebration was a special experience to share with his family.

Illinois Secretary of Transportation Omer Osman speaks at the Quad Cities International Airport about $5.6 million from the Rebuild Illinois p…

The Davenport City Council will meet next week to consider approving an economic development agreement with Russell Construction and Development to facilitate the development of a planned 95-acre industrial park at 8730 Northwest Boulevard.

Two years after an unknown collision permanently damaged the dock at Schwiebert Park in Rock Island, city leaders are moving forward with having it replaced at a cost of nearly $600,000.

Scott County officials raised concerns over plans by the city of Davenport to use a tax incentive for the construction of an onsite wastewater pretreatment facility at PB Leiner's manufacturing facility at 7001 Brady Street.

After decades of discussion and prodding by business leaders, Davenport seems poised to move ahead with plans to eliminate one-way traffic through part of downtown and mitigate the effects of more frequent river flooding.

For centuries, libraries have been a gathering place and resource to which people turn for information to improve their lives.