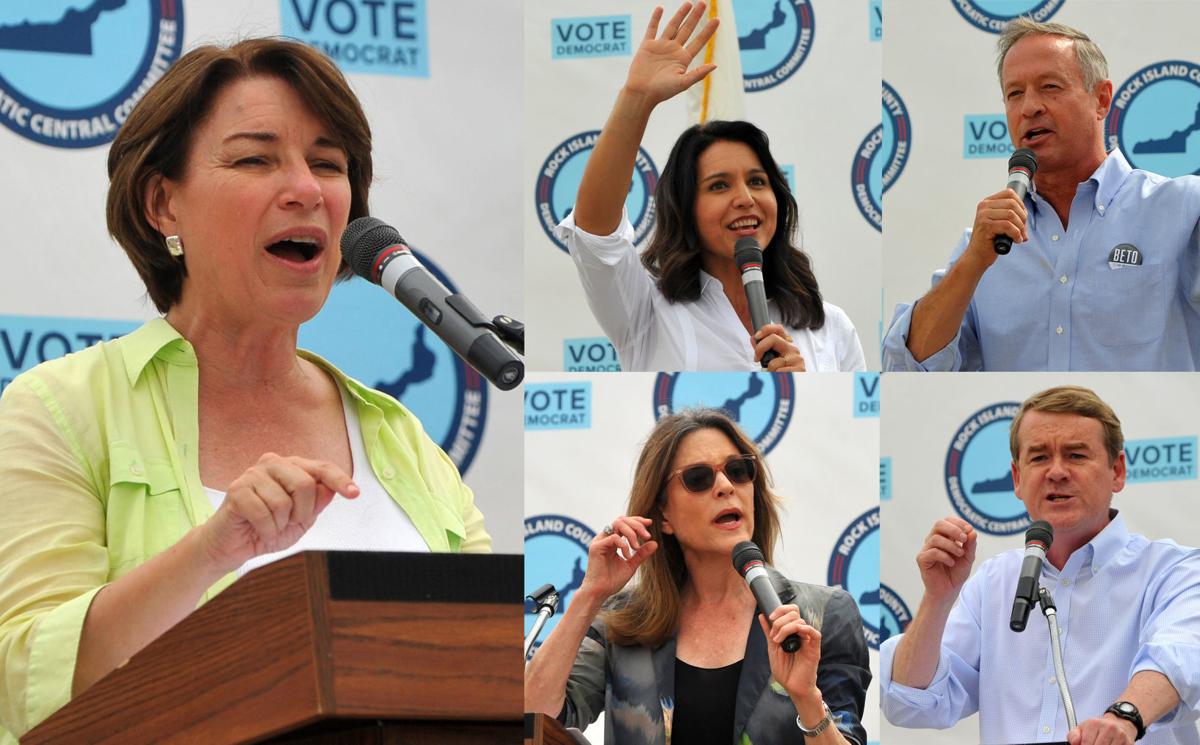 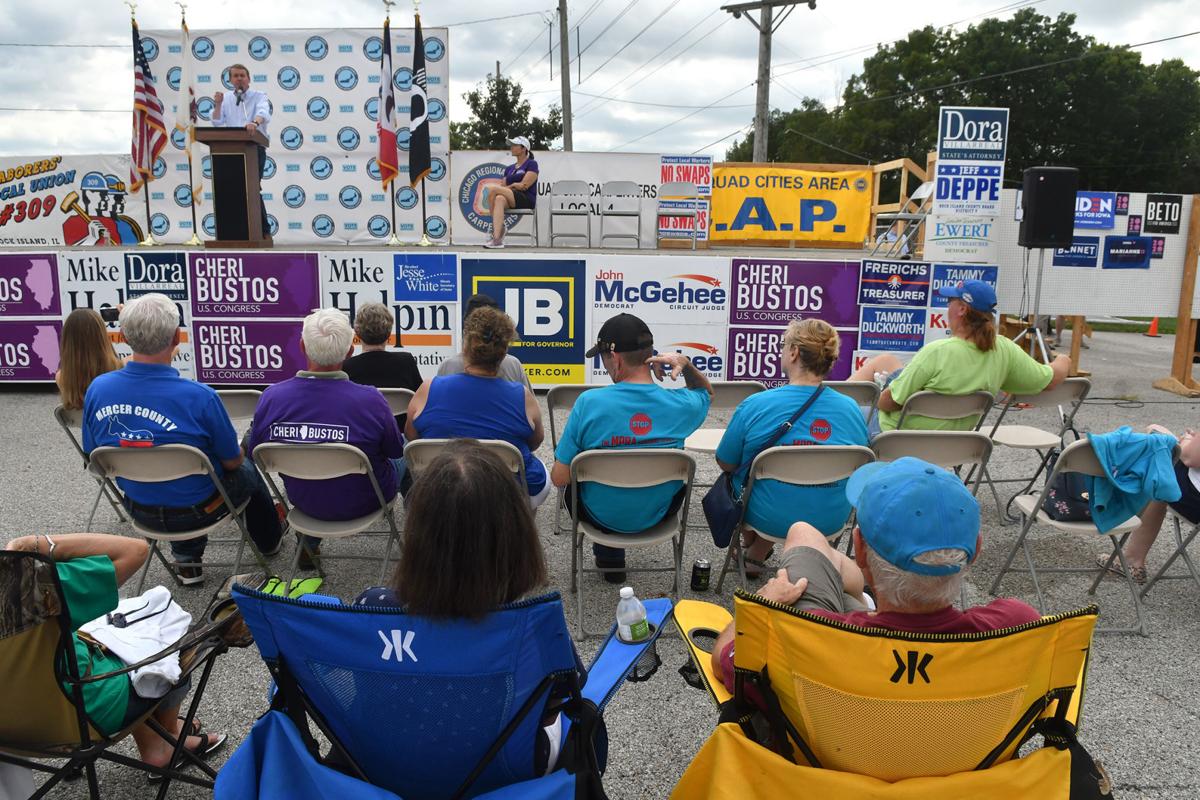 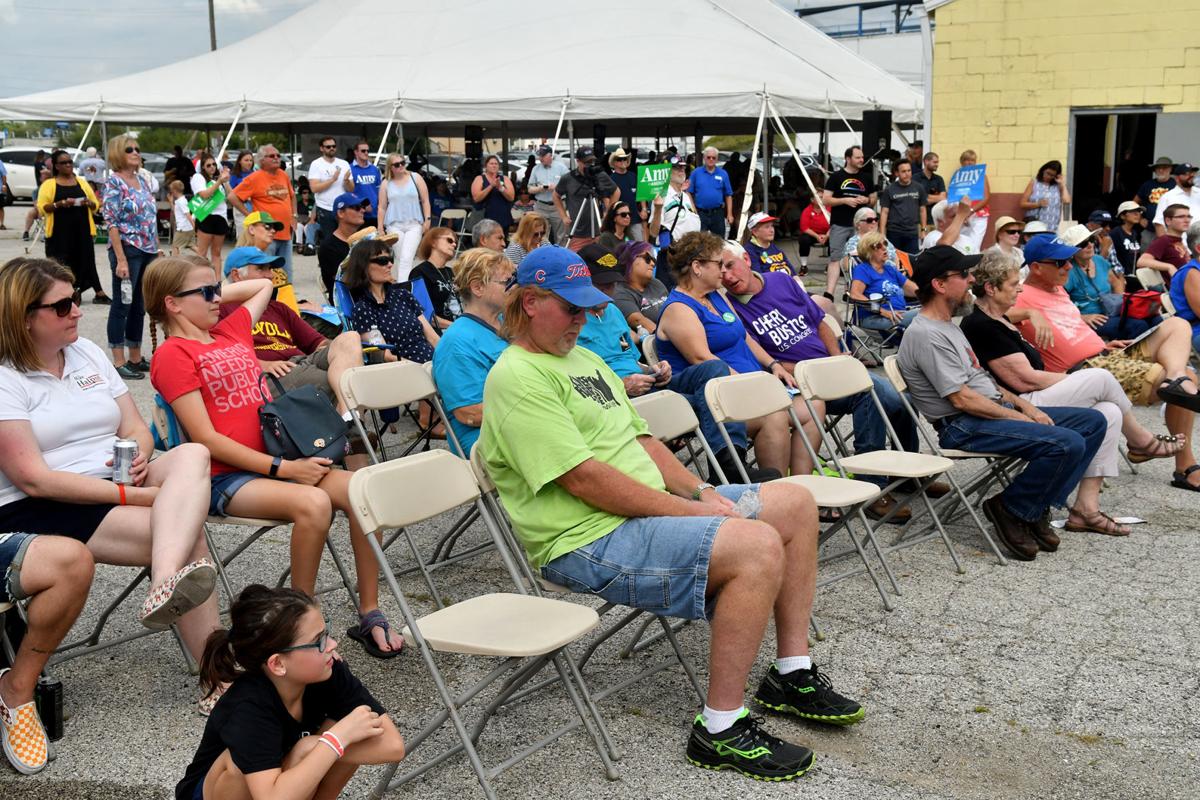 Crowds at the 52nd annual Democrats' Labor Day Picnic listen to the various candidates speaking at the Rock Island County Fairgrounds on Monday in East Moline. 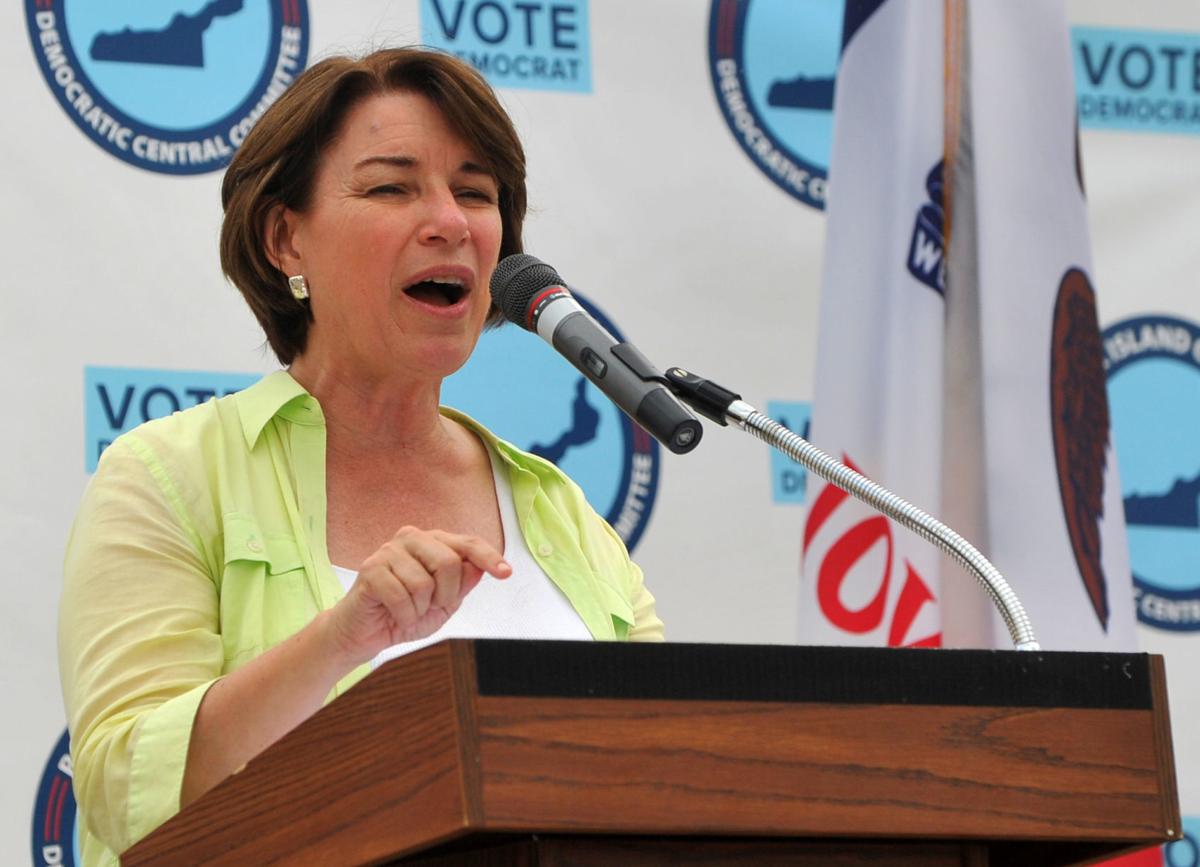 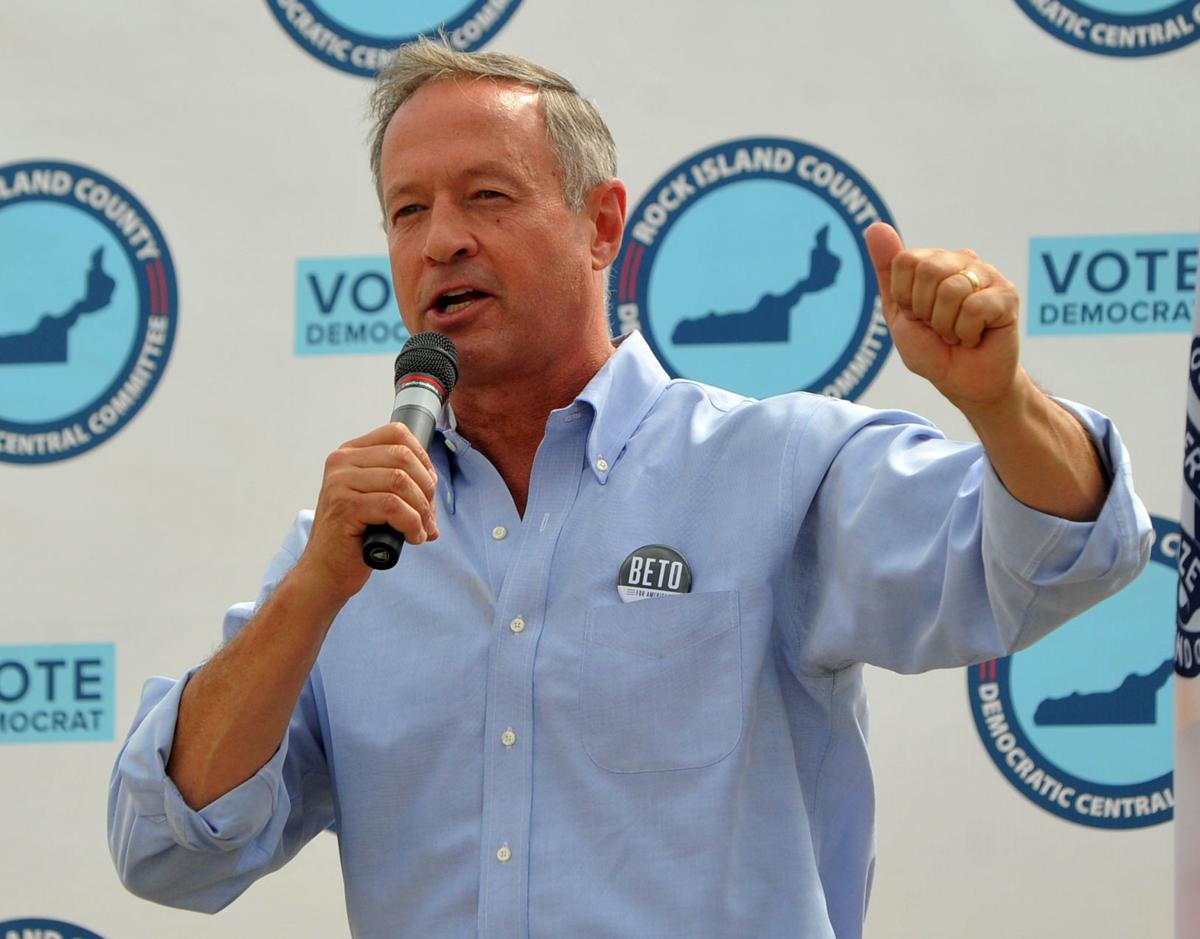 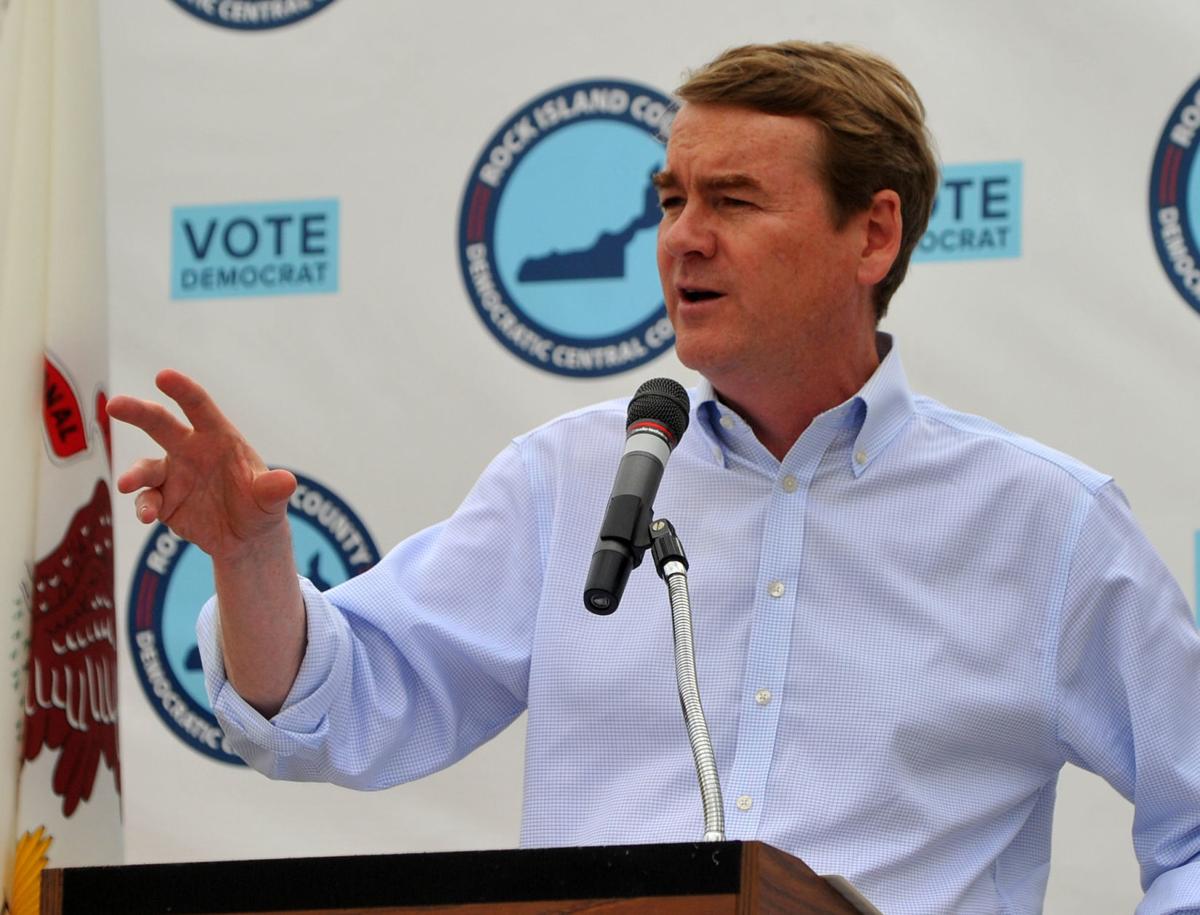 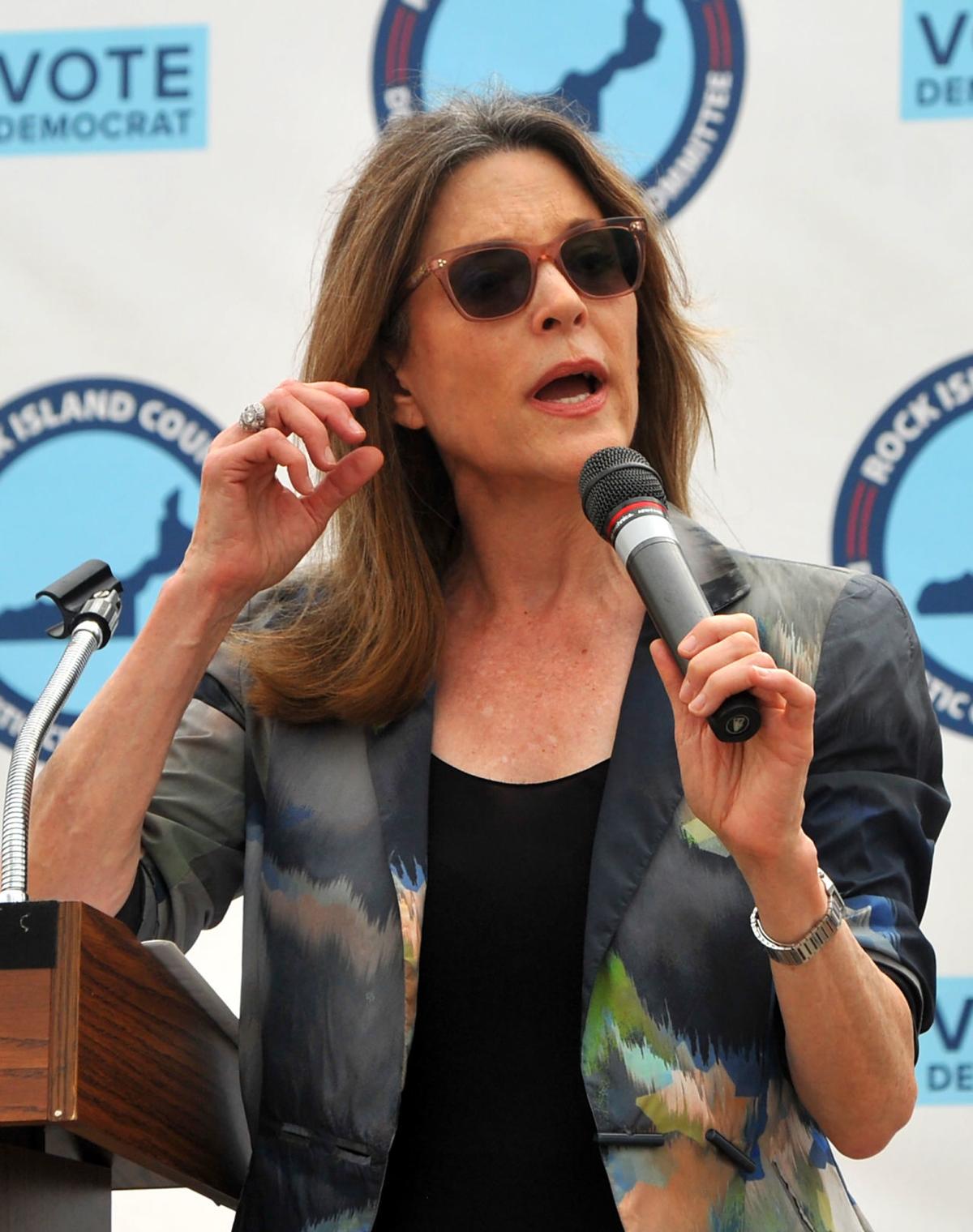 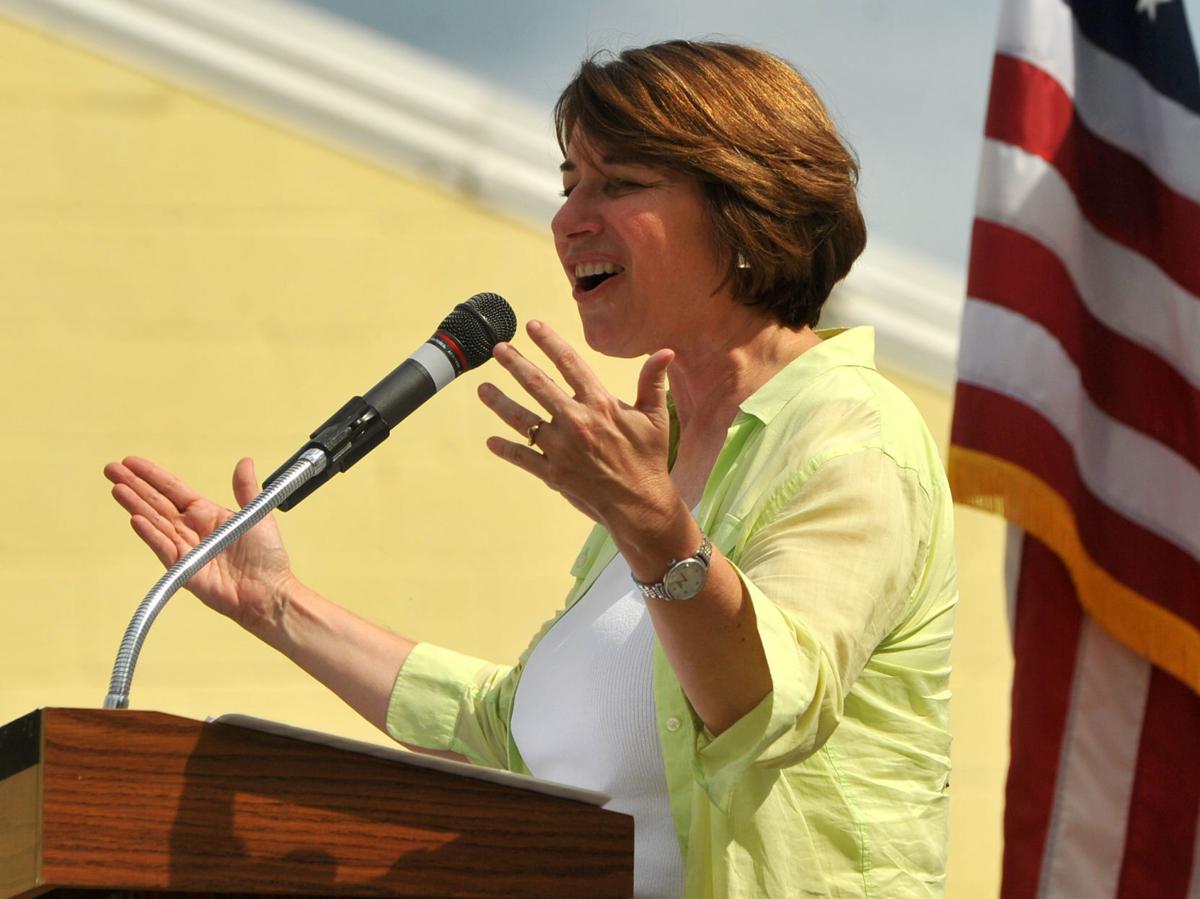 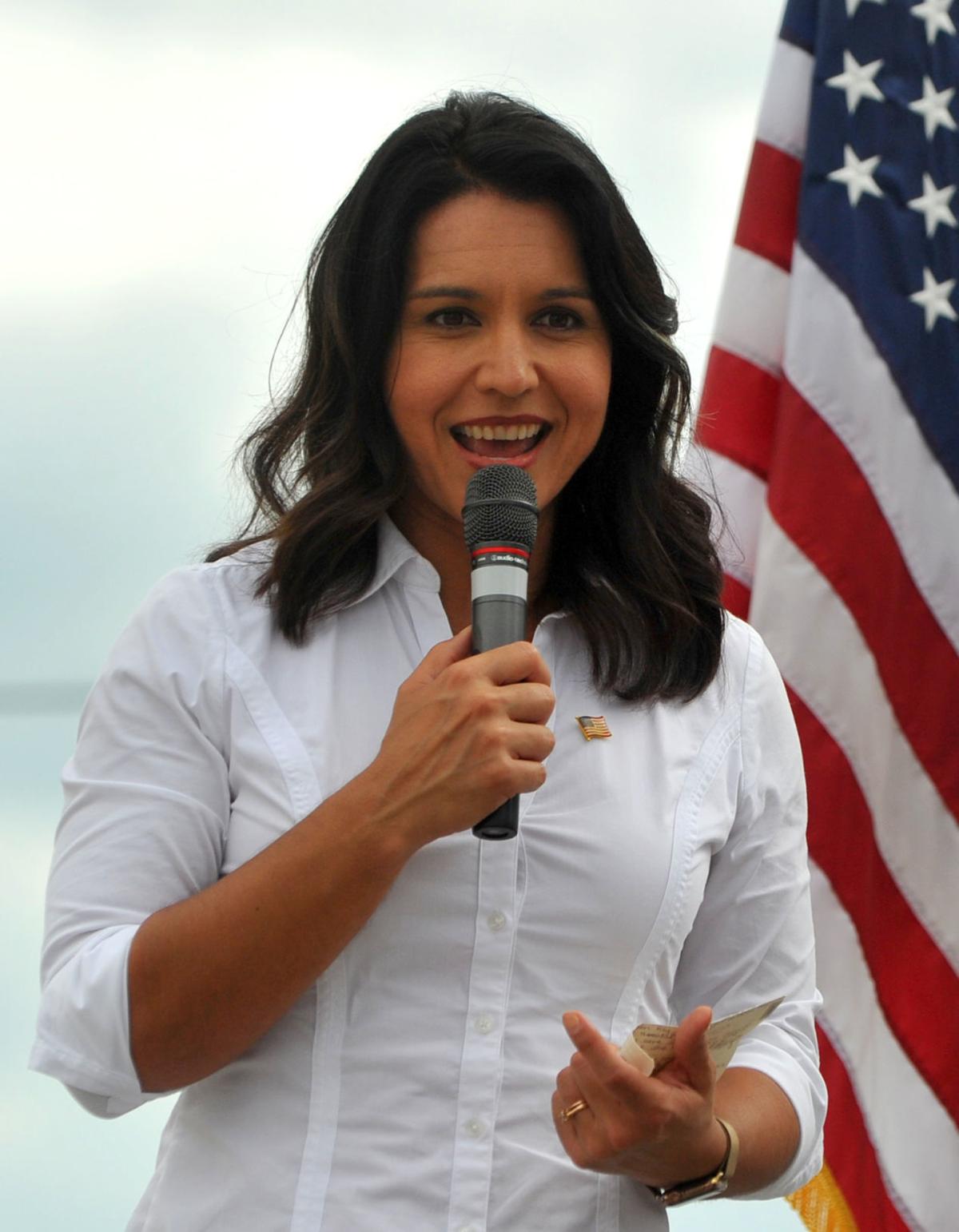 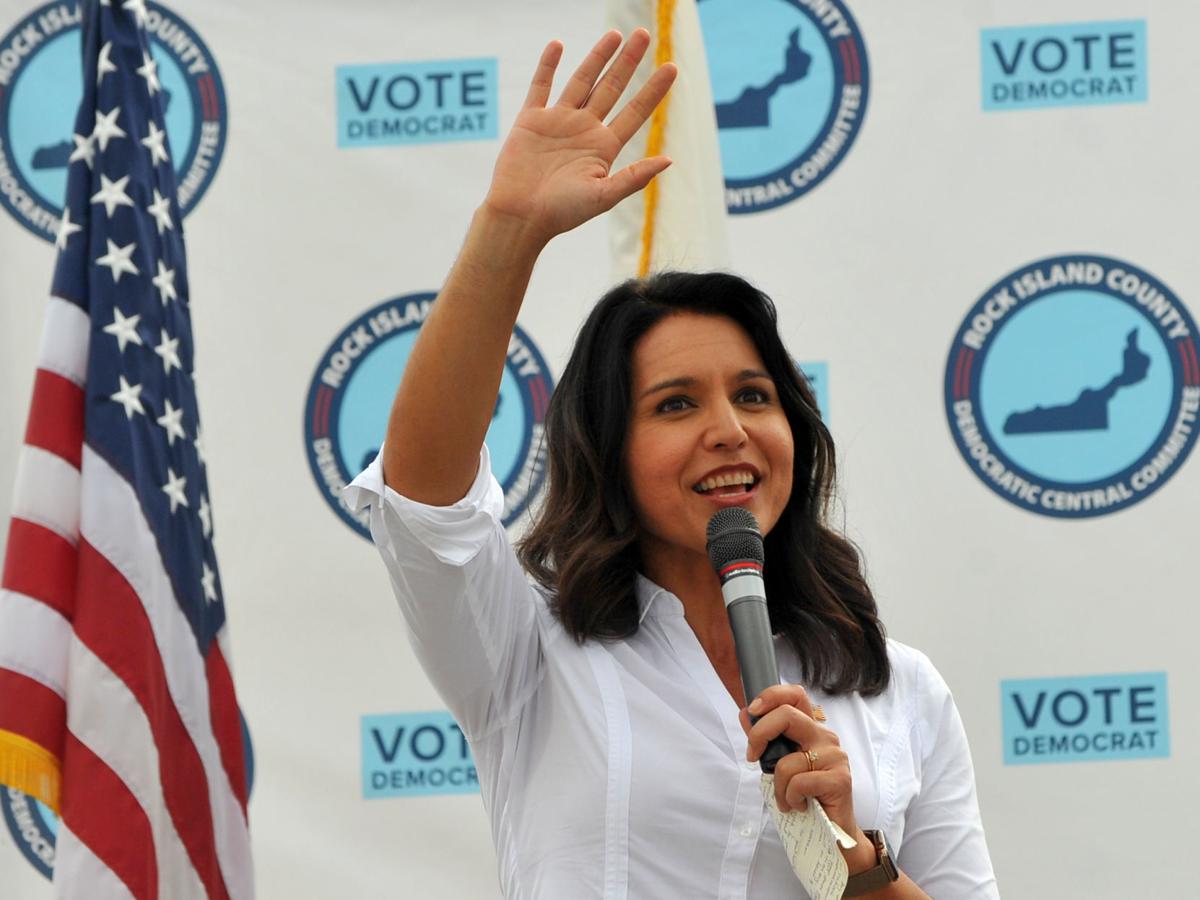 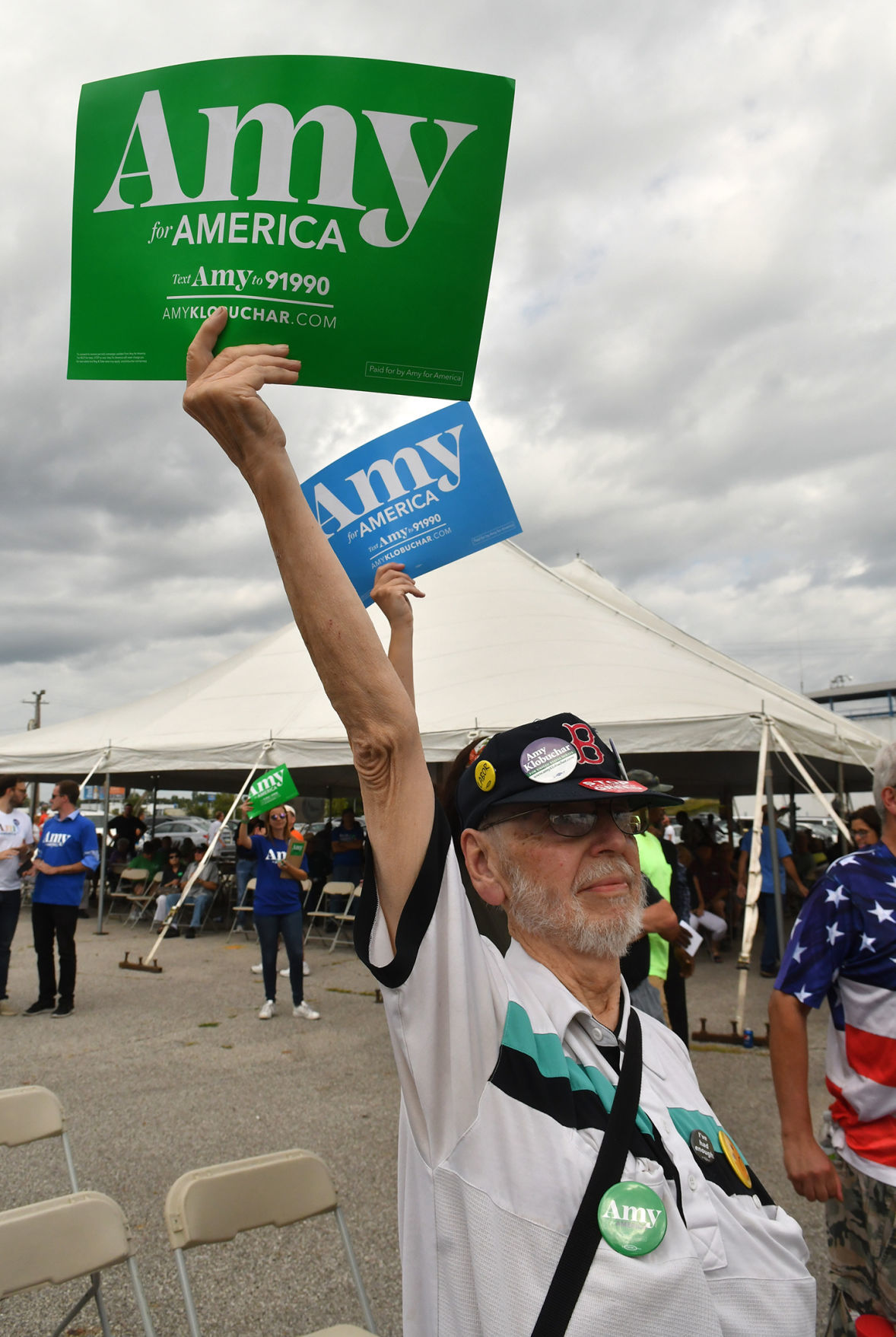 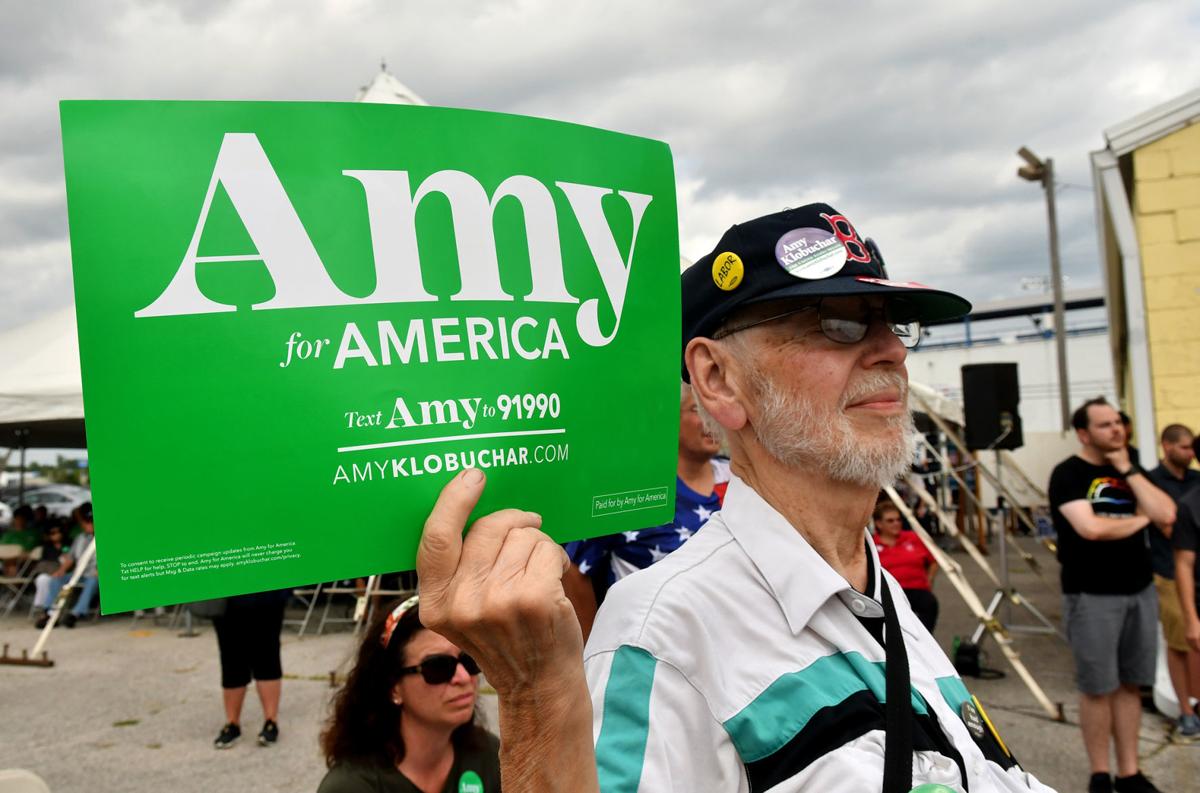 EAST MOLINE — Presidential candidates hoping to sway voters on the Iowa border as time ticks closer to the Feb. 3 caucus stopped in the Quad-Cities on Labor Day, pledging their support for labor unions and working-class families while promising they were the best candidate to beat Donald Trump next year.

Klobuchar, the only candidate present who qualified for the third presidential debate on Sept. 12, anchored the lineup, speaking last.

Klobuchar talked about the importance of building a coalition and not leaving supporters behind.

Klobuchar said President Trump was full of "false promises" and failed to deliver for rural America in terms of an infrastructure bill and said she was the first candidate to come out with a major infrastructure plan of her own.

"What's the difference between Donald Trump and Greenland? Greenland is not for sale," Klobuchar said, drawing laughter from the crowd.

"I will make you one promise, and that is this; I will win and I will govern with integrity and you will never have to turn down the volume because I will be a president you can be proud of," Klobuchar said to a standing ovation.

U.S. Rep. Cheri Bustos, D-Moline, acted as master of ceremonies of the event, introducing each speaker.

Bustos told the crowd the 17th Congressional District is one of the "heaviest organized labor districts in America. We have 90,000 labor households in the 17th District of Illinois. We need to stand strong, loud and proud for organized labor — not just on Labor Day, but every day of the year to make sure we support those who help working men and women get ahead."

Gabbard, who has a Quad-Cities connection, said she was staying with her aunt and uncle, who live in Moline. Gabbard said workers were the "engine behind our country's economy. The eight-hour work day, safe working conditions, overtime — all of these things came about because of the hard work of labor."

Gabbard said nothing was more American than fighting for equality, a living wage and a clean environment to live in.

Williamson, who also has a Quad-Cities connection, said her father grew up in Rock Island and emphasized the importance of labor unions.

"We need to demand more of a Democratic candidate than someone who will say, 'I will fight for your rights,'" Williamson said. "We need a candidate who is willing to admit, where has the Democratic party been for the last 40 years that it has gotten as bad as it's gotten.

"A lot of workers voted for Donald Trump. The reason why is because for four years, a lot of American people didn't get a pay raise," Bennet said. "They said to themselves, we might as well send a reality TV star to Washington, D.C. You have to make Trump a one-term president. He has broken every single promise to working people in this country."

Bennet said Trump promised tax cuts but gave breaks to the wealthy instead, often putting his own interests ahead of average Americans.

When not on stage, candidates casually worked the crowd, shaking hands and taking pictures. A man wearing a "Biden 2020" T-shirt asked for a photo with Gabbard. Williamson's supporters held signs reading, "Marianne: Turn love into a political force," and "Beat big lies with big truth."

Gabbard's supporters, some wearing red "Tulsi 2020" T-shirts, waited in line to speak to the Congresswoman.

Chuck Wilt, 79, of Rock Island, stood near the foot of the stage, proudly waving his green "Amy for America" sign during Klobuchar's 15-minute speech. Wilt said he moved to Illinois 12 years ago from Minnesota.

"I voted for (Kobuchar) in everything she ran for," Wilt said. "She's the only person I can think of in these 20 (candidates) who can really change things. She is very much in support of labor."

"We have to win in Iowa in terms of the Senate race," Duckworth said. "Whether or not Trump is in the White House, we need control of the Senate, and we don't get control of the Senate without flipping (Iowa) Sen. (Joni) Ernst's Senate seat. Moscow Mitch has turned the Senate into a legislative graveyard. Sensible gun legislation and legislation to support women and working families — they're so afraid these bills will pass, they won't even let us vote on them."

Former Maryland Gov. Martin O'Malley spoke in support of Beto O'Rourke, who remained in Texas to attend a memorial service for victims of a mass shooting that happened at a Walmart store in El Paso Aug. 3 in which 22 people were killed.

O'Malley said he endorsed O'Rourke in January before O'Rourke had announced he was running.

"I believe in (O'Rourke's) candidacy," O'Malley said. "We have the ability as a party to put forward the very believable story of a fearless American future that squares its shoulders to the challenges of climate change and makes it the greatest business and job creation-opportunity our nation has ever seen.

"I also see in Beto the ability to give voice to a whole new generation of leadership, not only in the area of politics, but across our country."

Rock Island County State's Attorney Dora Villarreal, who is running for election in 2020, acknowledged the importance of labor.

"We are gathered here to recognize and celebrate the contributions of the labor movement, which has really shaped our country and especially our county here in Rock Island," Villarreal said. "It's been a very inspiring force for many people, including myself. It's about promoting fairness, equality and justice for all of those who make our community great. Those are the same things I am trying to promote in Rock Island County."

Villarreal said she was impressed with Klobuchar and Gabbard.

"I was really impressed with Tulsi; I thought she did a great job," Villarreal said. "She took some time to speak with myself and my husband. She's very down to earth. It's always nice to get an opportunity to talk one-on-one with them."

In the crowded field of presidential candidates, U.S. Sen. Amy Klobuchar, D-Minn., stands out for her plans to build the nation's infrastructu…

Klobuchar to hold meet and greet at Ross' Restaurant Saturday

Crowds at the 52nd annual Democrats' Labor Day Picnic listen to the various candidates speaking at the Rock Island County Fairgrounds on Monday in East Moline. 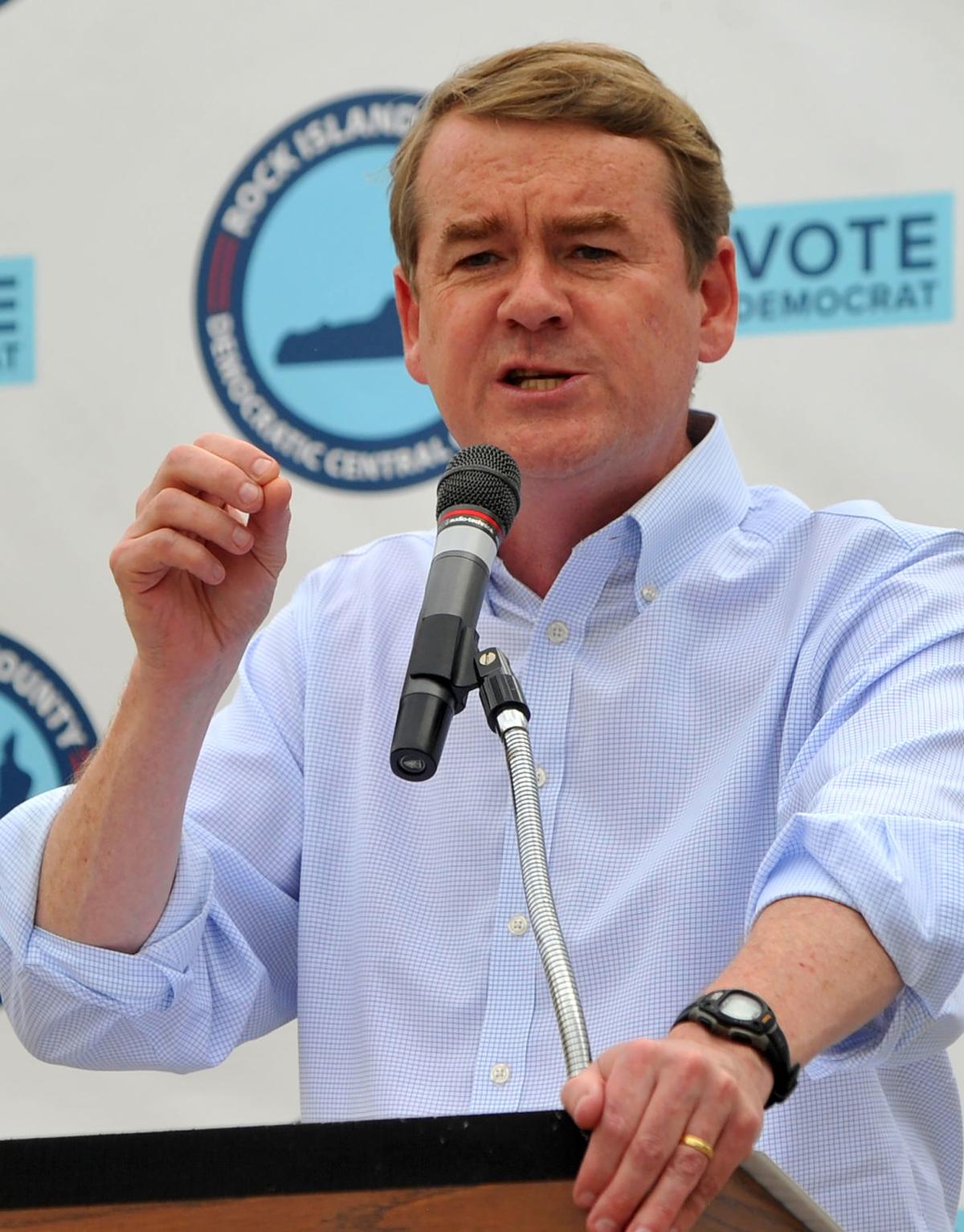