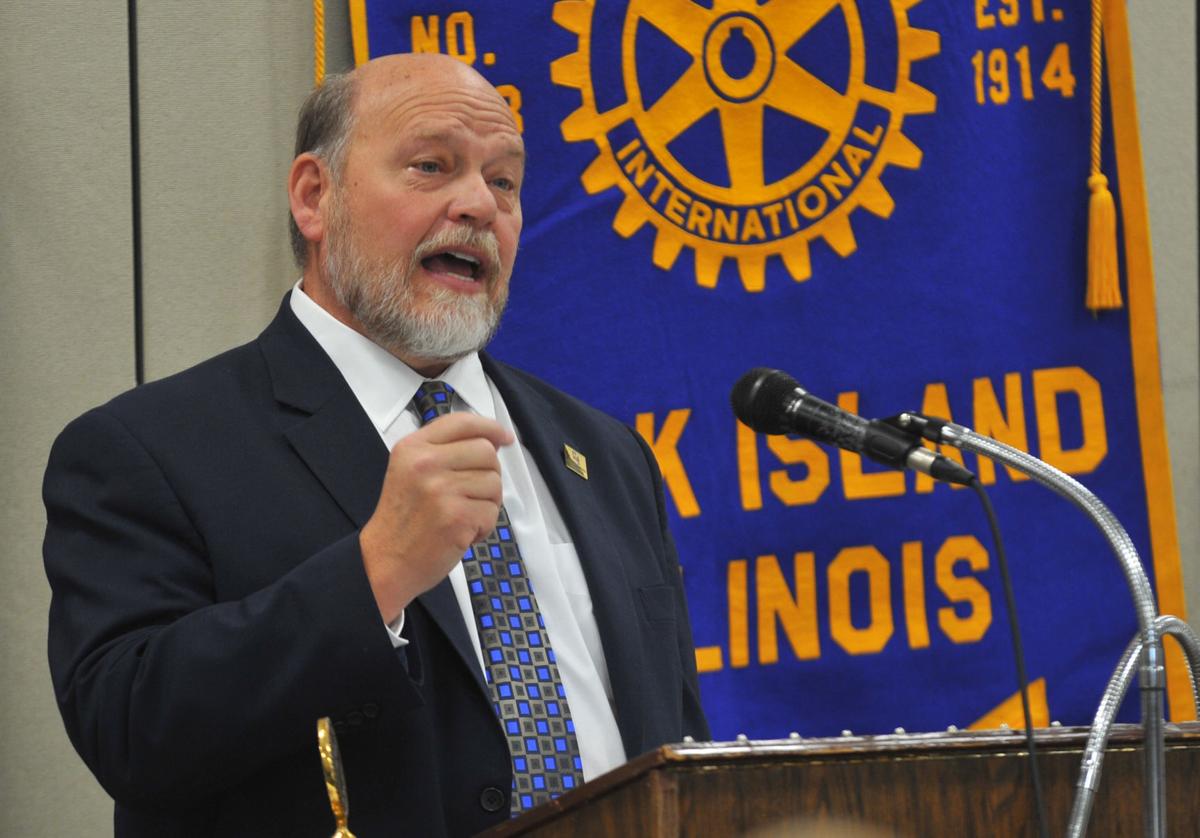 Mayor Mike Thoms gives the Rock Island State of the City address during the Rotary and Kiwanis meeting Monday at the Botanical Center. 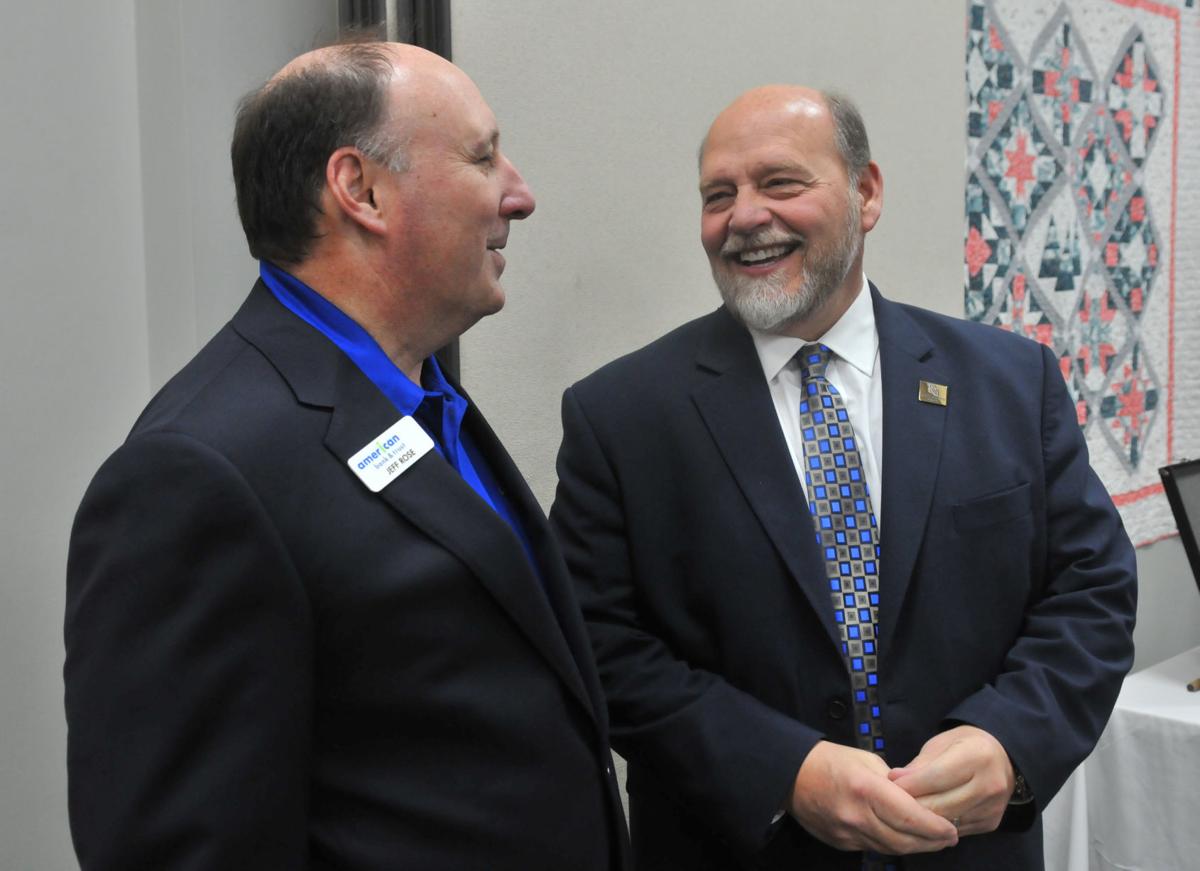 Jeff Rose, left, from American Bank and Trust, and Mayor Mike Thoms talk to each other before the mayor gives the Rock Island State of the City address during the Rotary and Kiwanis meeting Monday at the Botanical Center. 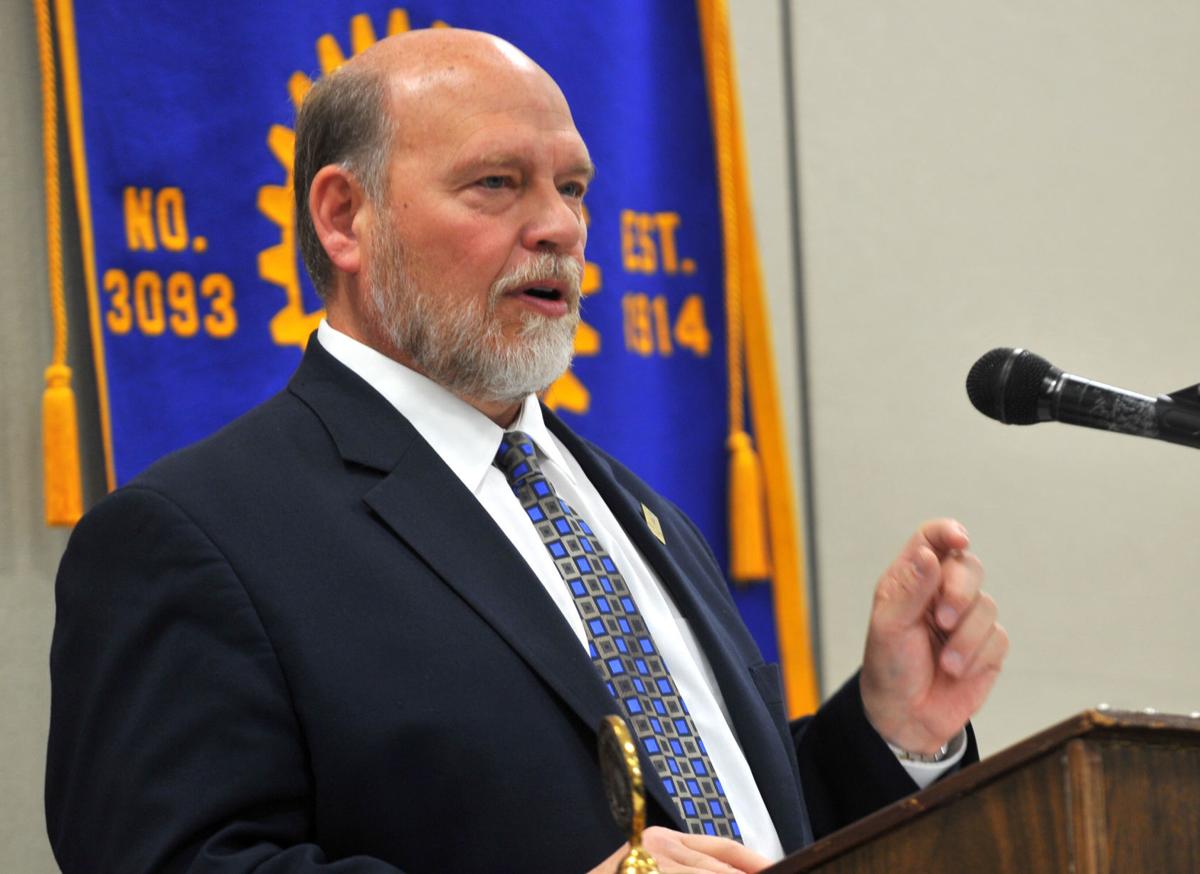 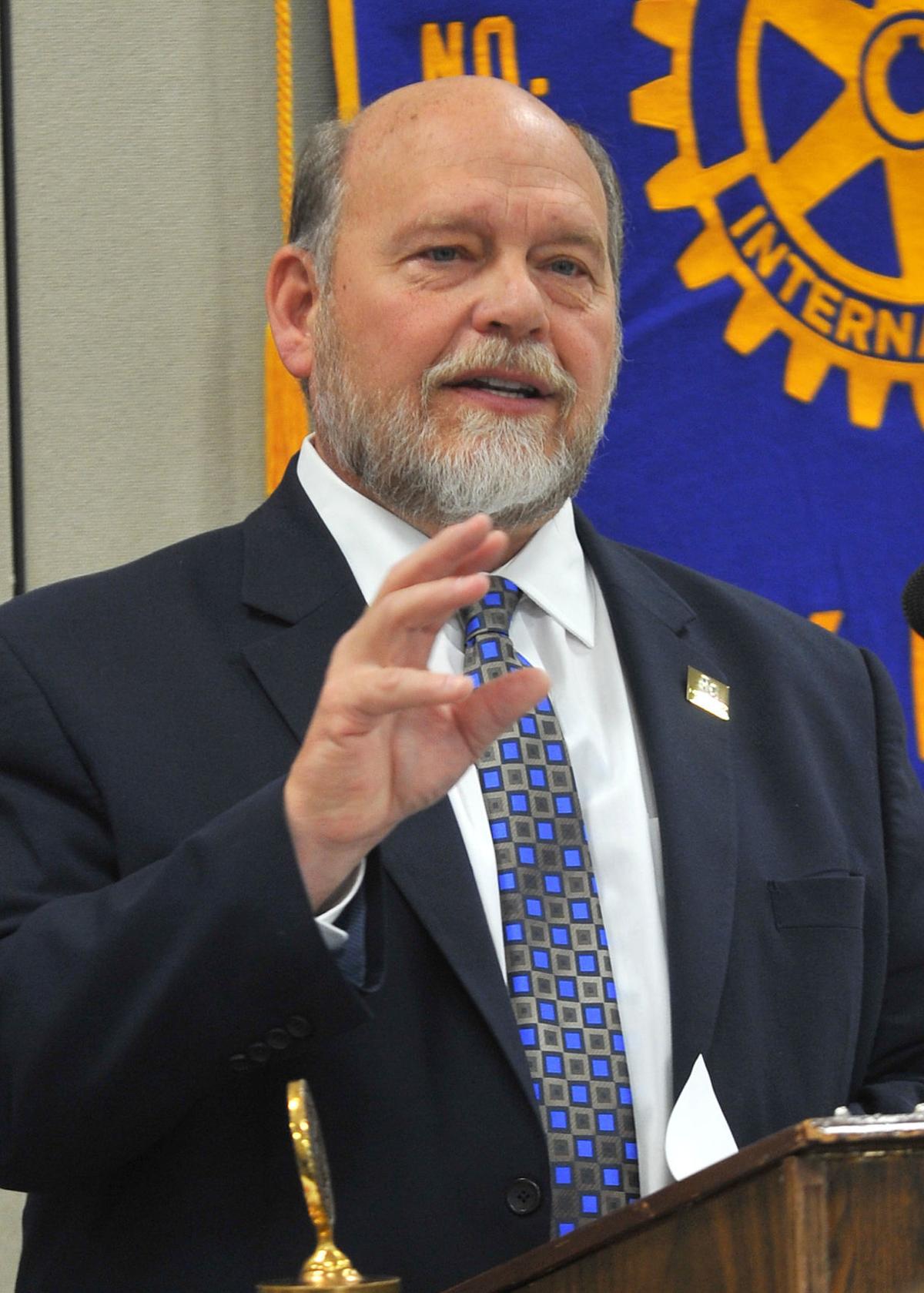 ROCK ISLAND — In 2018, the city brought in new investment, jobs, housing, and made improvements in every sector of the city.

Although the city made progress last year, Thoms said there is still work to be done.

“There have been many accomplishments in the past year, but we also need to recognize that the work doesn’t stop,” Thoms said. “I want Rock Island citizens to feel proud, involved and excited about our city; (have) pride in our community; (be) involved in decisions; and (be) excited about living and the future of Rock Island.”

The city made improvements by demolishing blighted houses and properties, including the former Case and Norcross factory buildings; approved 11 facade grants in the amount of $65,000; and made use of more than $1 million in Housing and Urban Development (HUD) grants by improving Douglas Park and city sidewalks.

“These are all very positive for Rock Island,” Thoms said. “I commend the work from every employee that made these things happen.”

Thoms said the city also increased its number of urban garden plots to 20, collectively producing more than $65,000 in food.

The parks and recreation department had an active year with nearly 37,000 visits to White Water Junction, more than 45,000 visits to Saukie and Highland Springs golf courses and more than 15,000 people attended the annual “Red, White and Boom” Fourth of July celebration on the riverfront.

The city received more good news in November when its bond rating was upgraded to A2 and the negative outlook was removed. The city’s finance department was awarded the General Finance Officers Association (GFOA) certificate of achievement for excellence in audit and budget documents.

Looking toward 2019, Thoms was pleased to report the creation of a new enterprise zone within the city, which began Jan. 1.

“This is a great economic tool to help attract construction and new businesses and sale tax,” Thoms said.

He said violent crimes such as murder, aggravated assault and criminal sexual assault dropped by 35 percent in 2018, compared to 2017, while crimes including burglary, robbery, assault, theft and arson dropped by 9 percent.

Additional cameras were installed at four intersections, which will help with traffic and criminal investigations.

While Thoms acknowledged many achievements in the city in the past year, he also noted existing challenges.

“It’s easy to talk about accomplishments; now I’m going to take a look at some hard realities,” Thoms said. “We need more development; we need more sales tax and property taxes — people living here to help with the city’s growth. We need to find ways to stabilize our budget. As of now, our financial position is solid, but that will not continue if we don’t commit to making difficult decisions.”

Thoms and City Manager Randy Tweet reported in December the city has $118 million of debt. To curb expenses, Thoms said services may have to be cut.

“If we make too many more cuts, we’ll end up digging deeper into core services,” Thoms said Monday. “The city of Rock Island has a great reputation for snow removal. We may have to reduce the number of snow routes, and it won’t be as great and efficient as it is now. I’m not saying we’re going to do that, but those are the things you have to look at.

“We have to make sure we have a balanced budget every year and stay strong. We have to change how we do business and continue to be aggressive and get more revenue coming in. There are many positive things on the horizon.

“The resilience of Rock Island’s residents is great, and our community pride is strong.”

After nearly four months of emergency steps to manage the spread of new coronavirus infections, COVID-19 cases in Iowa are on the rise again — alarming local health officials.

Moline is sending a message to landlords and tenants: You're not welcome in the city if you commit or allow crimes.

Scott County Auditor Roxanna Moritz announced Thursday she will mail absentee ballot request forms to all active registered voters in the county to encourage absentee voting for the Nov. 3 general election in the wake of increasing coronavirus cases.

WHAT WE KNOW: In April, trustees approved a fiscal 2021 budget that takes $100,000 out of the village's $1 million general fund reserves and designates half of that sum for street work and half for Love Park improvements.

SPRINGFIELD — An order last week by a downstate judge nullifying each of the COVID-19-related executive orders issued by Gov. JB Pritkzer the past three months is quickly causing friction between the state and a Republican lawmaker.

Iowa 2nd Congressional District Democratic candidate Rita Hart said Tuesday she agreed with the principles of legislation to reform concentrated animal feeding operations (CAFO) if she won the Nov. 3 general election and that she was interested in learning more about the bill that will make those changes.

WHAT WE KNOW: The Relay For Life was postponed from its original date of June 27 because of the COVID-19 pandemic.

Mayor Mike Thoms gives the Rock Island State of the City address during the Rotary and Kiwanis meeting Monday at the Botanical Center.

Jeff Rose, left, from American Bank and Trust, and Mayor Mike Thoms talk to each other before the mayor gives the Rock Island State of the City address during the Rotary and Kiwanis meeting Monday at the Botanical Center.