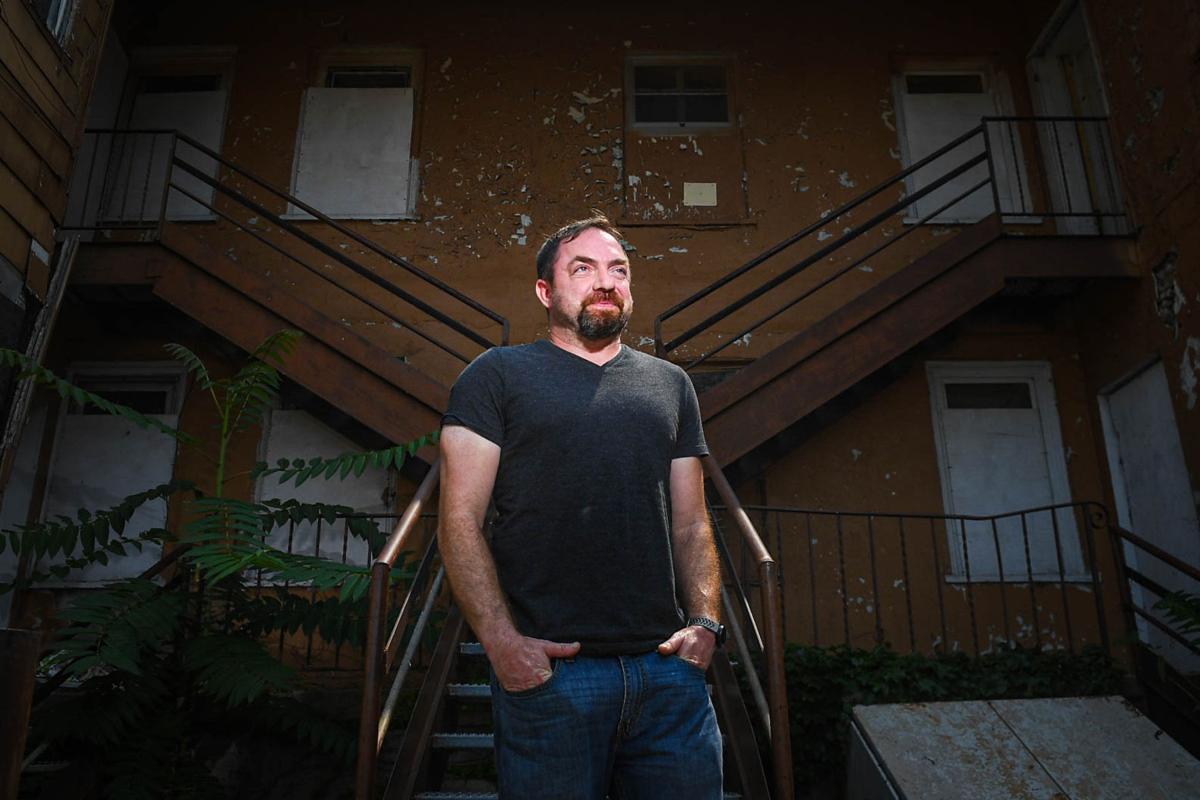 Developer Jamey Licandro bought the historic Hiller Building at 314 Gaines St. in June of 2020 for $8,000, after seeing it advertised on Facebook marketplace. He is planning to restore it into 10 apartments. Part of the structure was built in 1852, and it was considered one of the most endangered historic properties in Iowa. 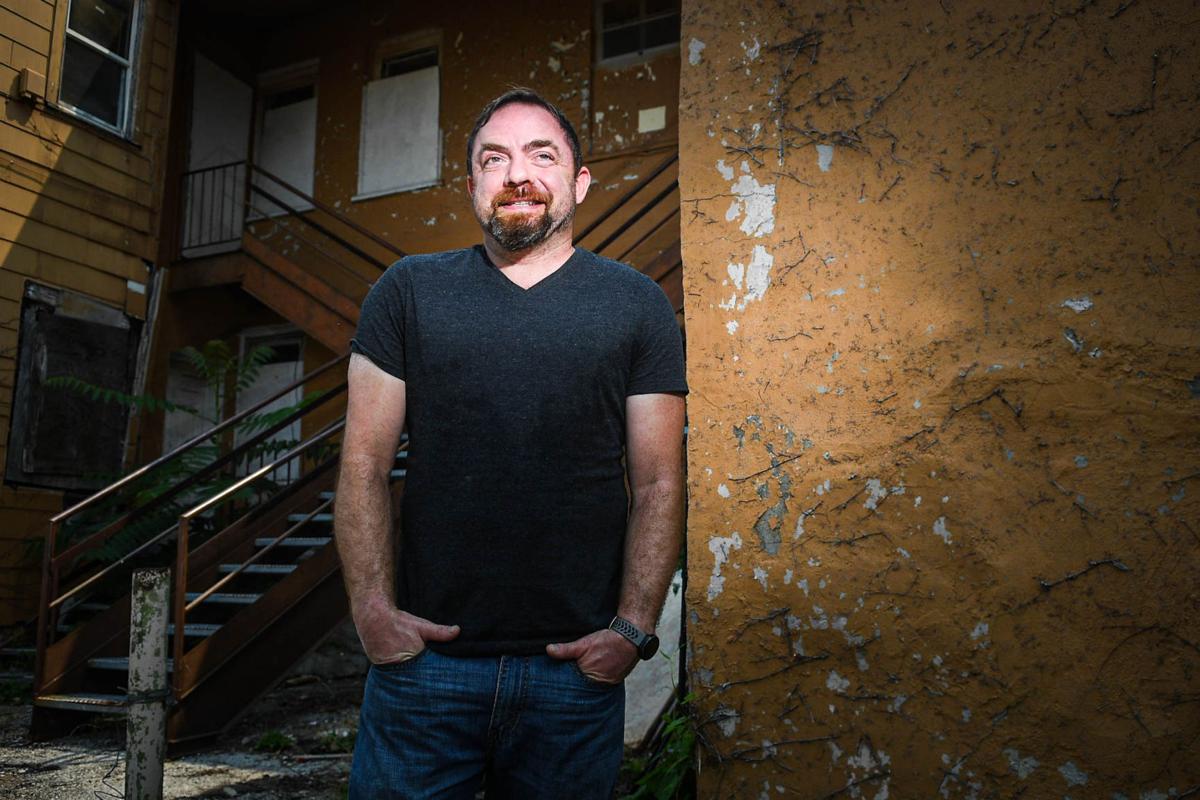 Developer Jamey Licandro poses for a portrait outside the historic Hiller Building on Wednesday in Davenport.

Several would-be developers have looked at the vacant stone building near the foot of Centennial Bridge on Gaines Street and considered trying to turn it back into 10 apartments.

None could do it.

Jamey Licandro of Bettendorf, however, remains determined and holds out hope he can save one of the oldest structures in Davenport, thanks to new backing.

"It sounds crazy looking back at it," said Licandro, who bought the historic Hiller Building at 314 Gaines St. in June of 2020 for $8,000 after seeing it advertised on Facebook marketplace while in the middle of restoring two historic apartment buildings at 5th and Ripley streets.

The building — portions of which were built before the Civil War — has been vacant since 2015 when the city deemed it uninhabitable and later placed the property on its "repair or demolish" list.

The city would provide a 100% property tax exemption over 10 years, amounting to at least $1,000 per apartment to meet a state-required local match.

Savings from the city's Urban Revitalization Tax Exemption program, which seeks to soften the burden of higher property taxes that can result from new development in distressed areas of the city, will allow more equity and financing to be committed to the project, said 3rd Ward Alderwoman Marion Meginnis, who represents the area.

Meginnis, who abstained from voting on the resolution, is a self-employed historic preservation consultant who is aiding Licandro in applying for state grants and tax credits to finance the work.

"Without help from the historic and workforce housing tax credits, nothing about it is viable," Licandro said of securing lender financing. "The costs are exorbitant to be able to do it the right way — the historically accurate way — to restore the building the way it needs to be done."

The federal program provides a 20% credit against qualified expenses for rehabilitating eligible historic structures. Iowa provides a 25% credit, as well as a refund of sales, service or use taxes paid during construction and a state investment tax credit of up to 10% of costs directly related to the construction or rehabilitation of housing.

Licandro said he anticipated starting work as soon as this fall and was waiting on a masonry company to begin addressing the building's most immediate need: stabilization of the south wall that is bowing and starting to crumble.

"Super extensive amount of work has to go into that," Licandro said.

Despite that, both he and Meginnis said the building, with its 15-inch-thick stone walls, is in remarkable shape given its age, and retains much of its original layout as well as the central staircase.

"I hope to get the structural part of it done, hopefully, before winter and get some heat indoors and move to the interior," Licandro said.

He anticipates the restoration project taking 18 to 24 months to complete.

The 2½-story structure was built in 1852 as the personal residence of German immigrant John Hiller, a stone mason who helped build the first bridge across the Mississippi River as well as the Rock Island Arsenal Clock Tower. In 1856, Hiller began expanding the building — built on land sold to him by Antoine LeClaire, one of the city's founders — into a multi-unit dwelling, underscoring the rapid population growth and need for housing among German immigrants who flooded Davenport during the 1850s, Meginnis said.

The rowhouse is listed on the National Register of Historic Places and was designated as one of nine "most endangered" properties in Iowa by the nonprofit group Preservation Iowa in 2020.

"1852. That’s an incredible date to still have that building standing, but to redevelop this (property) is going to be a heavy lift," Alderman Kyle Gripp, at-large, said. "And this is a building worth saving," a project could spark interest to "redevelop the western portion of our downtown."

"It’s a gateway entrance … and we need to entice people to go west," Gripp said. "And I think it starts here."

Watch Now: The mystery of the mask

Watch Now: The mystery of the mask

The Quad-City region will be under a heat advisory later today through Thursday night so be careful if you must go outdoors.

Developer Jamey Licandro bought the historic Hiller Building at 314 Gaines St. in June of 2020 for $8,000, after seeing it advertised on Facebook marketplace. He is planning to restore it into 10 apartments. Part of the structure was built in 1852, and it was considered one of the most endangered historic properties in Iowa.

Developer Jamey Licandro poses for a portrait outside the historic Hiller Building on Wednesday in Davenport.