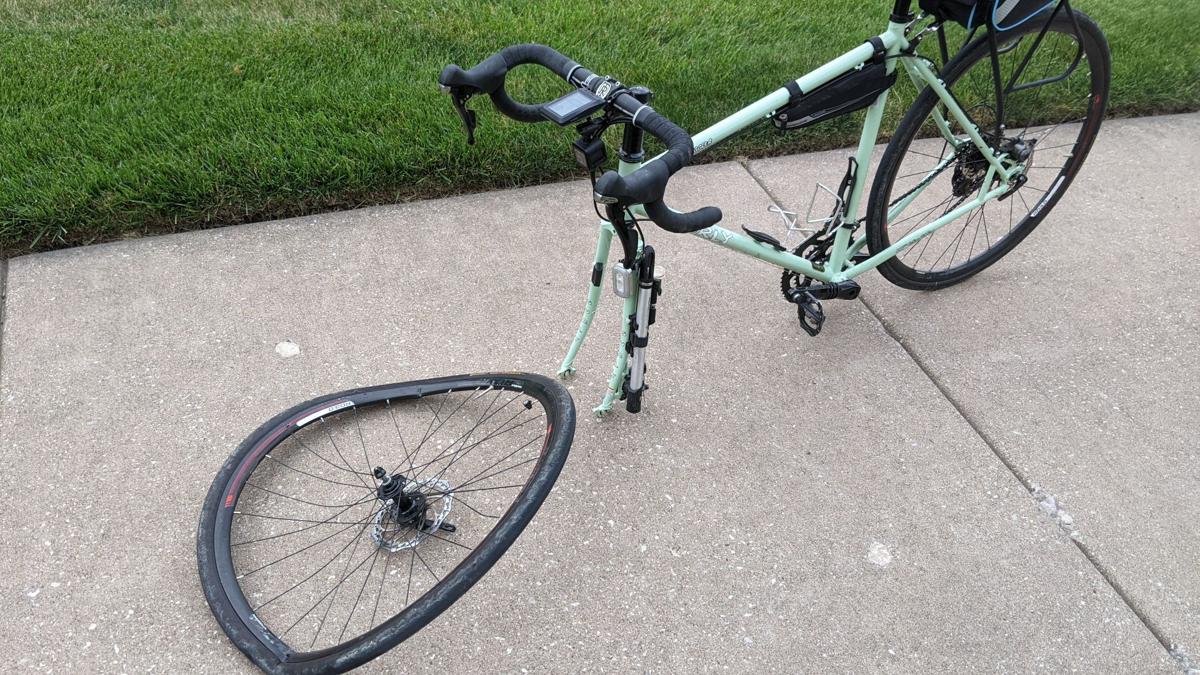 Moline Alderman Matt Timion's damaged bicycle after he was struck by a vehicle Monday morning, June 21, 2021 in Moline. 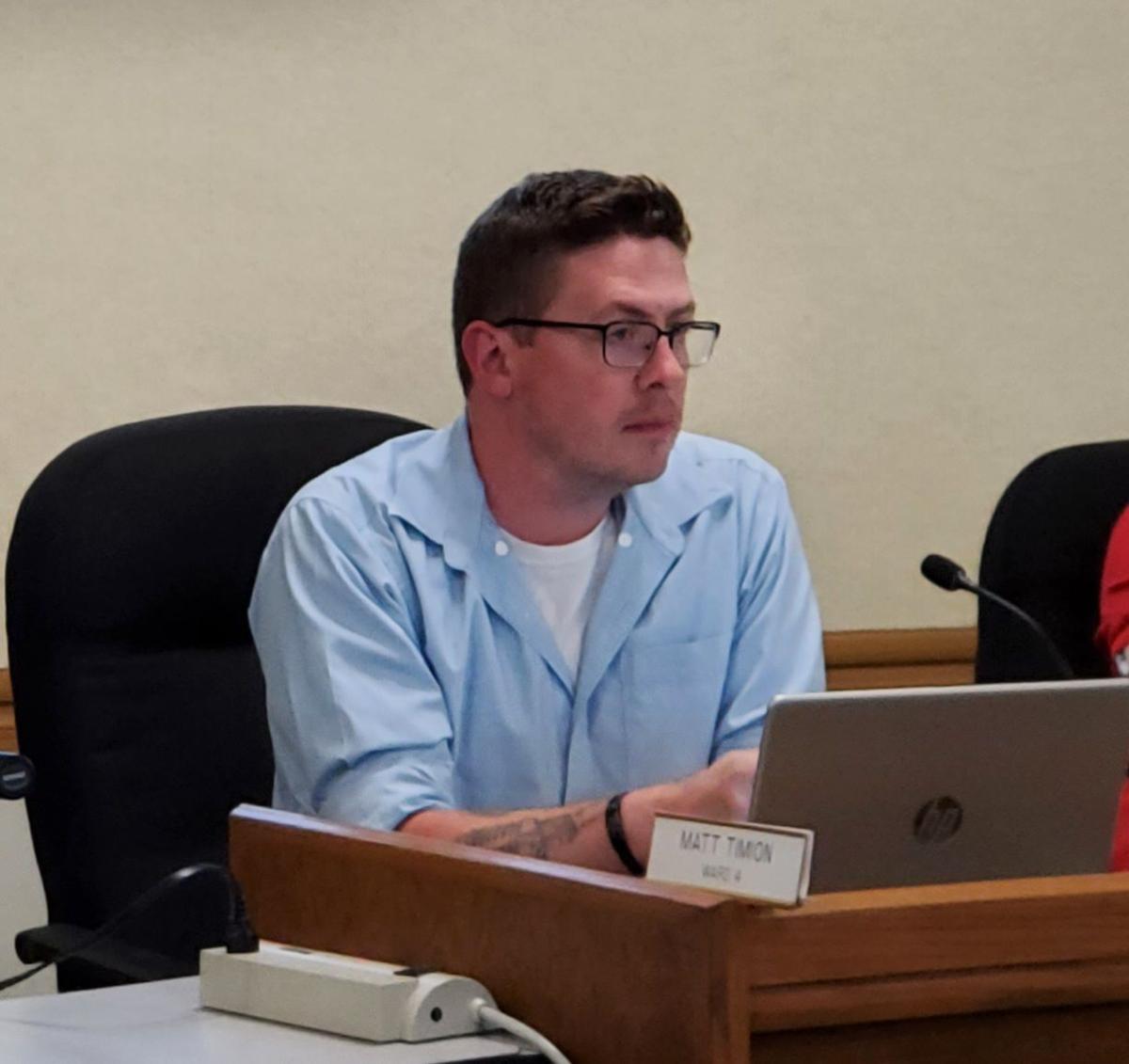 Moline 4th Ward Alderman Matt Timion called on the city to implement its bike pathways plan during the Tuesday, June 22 city council meeting after he was struck by a car while on his bicycle Monday morning, June 21, 2021.

At Tuesday's city council meeting, he called on city staff and council members to implement the city's bike pathways plan.

Timion, who represents the 4th Ward, said at around 9 a.m., he had just exited Ben Butterworth Parkway after finishing his daily bike ride and was stopped in the left turn lane on 23rd Street to turn onto 6th Avenue. A vehicle, driven by a 23-year-old male, sped up through a yellow light to turn from 6th Avenue onto 23rd Street. The driver struck the front wheel of Timion's bike, knocking him to the ground in the middle of the intersection.

"I'm sore and a little bruised, but I am fortunate that I walked away from the accident," said Timion, who also said the driver stopped to make sure he was all right and said they also exchanged information. "By making a sharp and fast turn, (the driver) ended up turning into my lane and hit me while I was on my bicycle. He didn't see me; he hit me. My front wheel was destroyed and the fork in my bike was destroyed."

Two bicyclists were killed May 4: Hugh Martin, 60, was struck and killed by an SUV in rural Rock Island County in the early morning hours by a 27-year-old Colona man; and Charles Hubbard, 13, was struck by a police cruiser in Moline later in the afternoon. Moline police officer Katherine Pennacchio is on administrative leave, pending an investigation.

Alex Marietta, 40, of Geneseo, was riding his bicycle in Davenport on June 3 when he was struck by a SUV that failed to stop for a red light; and Debbie Schroder, 78, of Moline was hit on the 3600 block of 70th Street Court, Moline, June 17.

Timion said another driver witnessed the accident. Timion followed up by attempting to file a police report, but was informed by police that it could not be considered an official report because there were no major injuries and the amount of property damage was below $1,500.

"I did go to the police and file a report because otherwise, these incidents go unreported and they don't contribute to statistics," Timion said. "How can we make effective policy without real numbers?"

Timion, who rides his bike to every city council meeting, said the city's sidewalks, bike lanes and recreational paths are "piece meal" and unsafe or unusable because they are disconnected.

"We have a bikeways plan, but lack staff to implement it," Timion said. "We have bicycle lanes, but they are disconnected and sporadic. I fear that we are mistaking our own inaction for prudence. We assume that by taking our time, we get the best and cheapest possible result. Usually we end up with neither."

Timion said council members have an opportunity to make Moline a livable city by making it "driveable, walkable and bikeable."

"A (livable) city is where people can ride their bike to work, or walk to their neighborhood restaurant," he said. "Right now Moline is only driveable. Some neighborhoods lack sidewalks. Other neighborhoods have sidewalks, but they are unsafe. We lack actual bicycle lanes. The easiest way to attract and retain residents is by promoting safety, and this starts on the very sidewalks and roads we use every day.

Timion said he would be meeting with City Administrator Bob Vitas this week to discuss the bike pathways plan further.

"I will be reaching out to members of the community who also want to see these changes. As a council we must stop making excuses for inaction, and instead look for solutions."

Watch now: Murder rates spiked in 2020 across the United States

Watch now: Allred says R. Kelly 'the worst' predator I have ever pursued

Watch now: Allred says R. Kelly 'the worst' predator I have ever pursued

Rock Island city council members met Monday night for a planning session to conduct an analysis of strengths, weaknesses, opportunities and threats to the city, naming the loss of residents and difficulty in filling city positions as some of the city's weaknesses.

Davenport will hire consultants for 'talent development'. Here's why

At 88, Grassley says he's got another run in him as he announces reelection bid

Grassley, 88, the longest-serving Republican in the Senate, announced Friday he will seek re-election to an eighth term.

Iowa voting laws have changed. What you need to know before casting a ballot

CAMBRIDGE — The Henry County Board will remain at 20 board members following action Thursday night.

The Week in Iowa

Iowa Women United will hold public forums, beginning Thursday, to discuss changes in Iowa voting laws and to give voters an opportunity to meet and question the two candidates running for mayor of Davenport.

The city of Davenport will pay its insurance carrier approximately $260,000 as part of a settlement in a wrongful termination lawsuit filed by a former Davenport fire chief.

Rock Island County officials want to use COVID relief funds to give employees $2,000 bonuses. The idea has been tabled until December.

A plan to give all Rock Island County employees one-time bonuses from American Rescue Plan (ARP) funds has stalled.

Moline Alderman Matt Timion's damaged bicycle after he was struck by a vehicle Monday morning, June 21, 2021 in Moline.

Moline 4th Ward Alderman Matt Timion called on the city to implement its bike pathways plan during the Tuesday, June 22 city council meeting after he was struck by a car while on his bicycle Monday morning, June 21, 2021.