Subscribe
Read Today's E-Edition
Share This
A 'beacon along the river': Figge hopes to make building a light sculpture on the Mississippi; city plans riverfront 'experience zone'
0 Comments
Share this
1 of 2 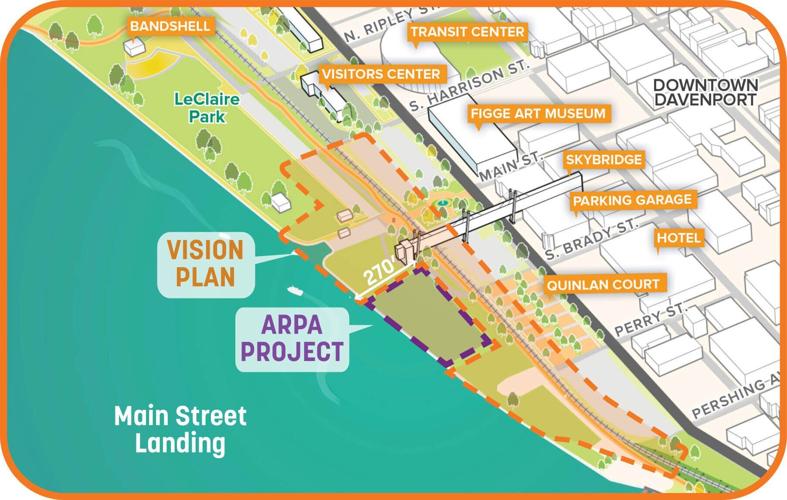 Davenport is asking for the public's feedback through an online survey about Main Street Landing, the riverfront park Davenport aldermen have set aside $6 million in American Rescue Plan dollars for. 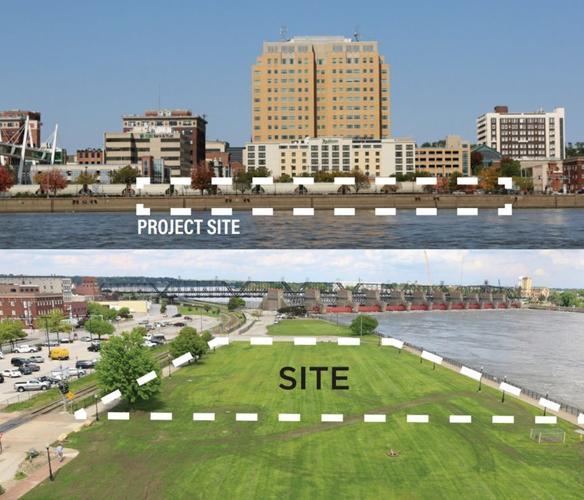 The Figge Art Museum architect originally intended for the all-glass Figge building to glow with man-made lights after nightfall.

But at the time, there wasn't enough funding to do it, said Executive Director Michelle Hargrave. The Figge, designed by British architect David Chipperfield, opened in 2005 and cost $47 million to construct, according to the museum's archives.

"The original idea was to make it a beacon along the river," Hargrave said. "And the façade, which has two layers of glass, was put in place in order to allow us to have space for us to light the building."

The art museum is joining the City of Davenport in applying for a state tourism grant called Destination Iowa, a program funded by federal COVID-19 relief dollars designed to help Iowa communities build amenities that would attract visitors and provide a sense of place.

Davenport plans to apply for the grant for a regional destination "experience zone" near the Skybridge, a pedestrian bridge over the rail road tracks, ice skating and walking path, and play features. 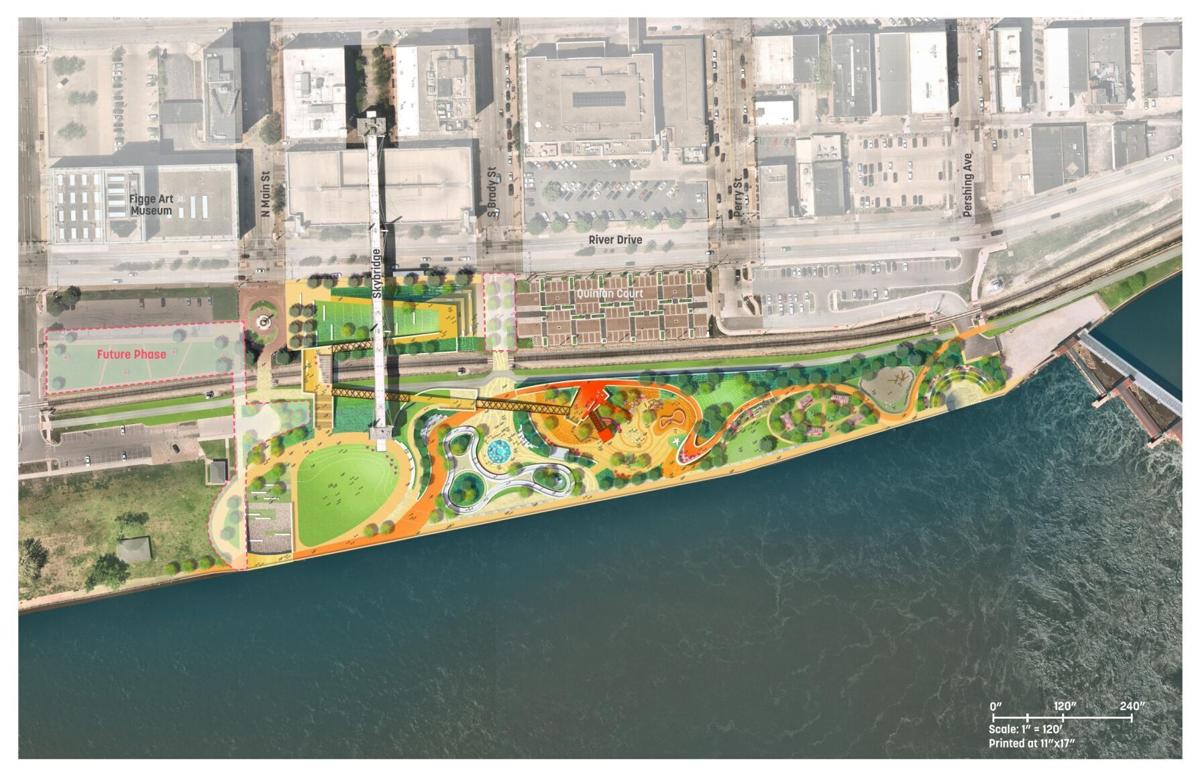 City staff presented a high-level concept of the area from design and engineering firm Sasaki on Wednesday as Davenport plans to apply by Sept. 30 for a $9.6 million grant. The grant would match the city's $12 million in American Rescue Plan funds and pending railroad merger settlement money.

At-large Alderman Kyle Gripp said the application is the "best iteration of this plan that I've seen in 20 years."

Davenport is seeking a state tourism grant for $9.6 million to revamp its riverfront between the Lock and Dam 15 and Centennial Bridge.

The city has set aside $6 million federal COVID-19 American Rescue Plan funds to build the park, and contracted architecture and design firm Sasaki to design such a regional attraction.

It asks the state for $9.6 million to match the city's $12 million. That includes $6 million in ARPA funding and $6 million promised to the city by Canadian Pacific as it seeks to merge with Kansas City Southern and increase rail traffic along the river. The city would only receive the settlement money if a federal agency approves the merger.

Davenport has discussed Main Street Landing for years as a regional amenity to attract and retain visitors and residents to the Quad-Cities, but costs of a regional amenity had always pushed it down on the city's priority list, said Alderman Rick Dunn, Ward 1.

But using COVID-19 relief funds, rail road settlement funds, and if the city is awarded the grant, the project wouldn't use the city's capital funds that are typically allocated in large part to street and sewer infrastructure.

"I don't know how you say 'no'," Dunn said of the grant application.

The city's plans for the park aim to alleviate some concerns of a tripling of train traffic along the river. That includes a new pedestrian bridge just to the west of the Skybridge from parking areas across the rail road tracks to the play area.

Too, the application includes funding for "quiet zones" which adds improvements to rail intersections that trains wouldn't have to blow their horns.

The city also aims to upgrade and renovate the Skybridge facility’s LED lighting hardware and software components to better match the Figge's light display, and build and landscape an area near Lock and Dam 15 that "highlights the existing amphitheater, its relationship to the Mississippi River, and scenic eagle and nature views," according to the city's agenda.

Applications to the grant program are due Sept. 30, city staff told council members. If the city doesn't win the grant or the railroad merger falls through, city staff said the project design would be scaled down.

Light up the Figge

As part of the application, Figge staff want to hire light artist Leo Villareal to illuminate the four walls of the building using LED light strips between the two glass wall layers, turning the building into an ever-changing light display.

The LED light strips would have access to more than 2 million different colors, Hargrave said, and the artist would use a software to program an ever-evolving pulsing light display. Hargrave said the artist would draw inspiration from the river, the sun setting, to create glowing and shifting colors that reflect natural elements in Davenport.

"There are times where the sequence might evoke atmospheric clouds and another time underwater oscillations," Hargrave said.

One of Villareal's most famous light displays is San Francisco's Bay Bridge.

The Figge is contributing $2.4 million, or 60% of the project costs, according to council documents.

Hargrave said that volume of color options and the energy efficiency of LED lights has improved leaps and bounds since 2005, a fortunate upside of waiting to install the lights.

"He views his works as digital campfires that bring people together," Hargrave said. "People are just naturally attracted to light and, you know, when they see his work of art, or the works of art, rather, they're so interesting and they're so moving that people will have conversations with complete strangers that are also looking at the work."

Sarah is the Davenport, Scott County, and Iowa politics reporter for the Quad-City Times/Dispatch-Argus. A DeWitt native, she graduated from the University of Iowa in 2021 and was editor of the student-run newspaper The Daily Iowan.

Sorensen, King square off in debate

Candidates for Illinois 17th Congressional district are vying for the opportunity to bring new representation to Congress.

An outdoor pool, ice-skating rink and a shared-use agreement are to be the trade-off for selling Bettendorf's Life Fitness Center.

WHAT WE KNOW: Trustees last week rejected any of the alternatives for changing their Village Hall: expanding the existing hall, renovating the Peterson building downtown or building new at the former bowling alley property.

Bettendorf approves plans for aquatic center in deal with YMCA

Bettendorf will sell the Life Fitness Center and build a large aquatics complex in partnership with the Scott County YMCA.

Newt Gingrich: Focus on inflation, crime a winning agenda for Republicans in 2022

Lawyers for former President Donald Trump have asked the U.S. Supreme Court to step into the legal fight over the classified documents seized during an FBI search of his Florida estate. The Trump team asked the court Tuesday to overturn a lower court ruling and permit an independent arbiter, or special master, to review the roughly 100 documents with classified markings that were taken in the Aug. 8 search. A three-judge panel last month limited the review to the much larger tranche of non-classified documents. A veteran Brooklyn judge, Raymond Dearie, is serving as special master.

Davenport is asking for the public's feedback through an online survey about Main Street Landing, the riverfront park Davenport aldermen have set aside $6 million in American Rescue Plan dollars for.