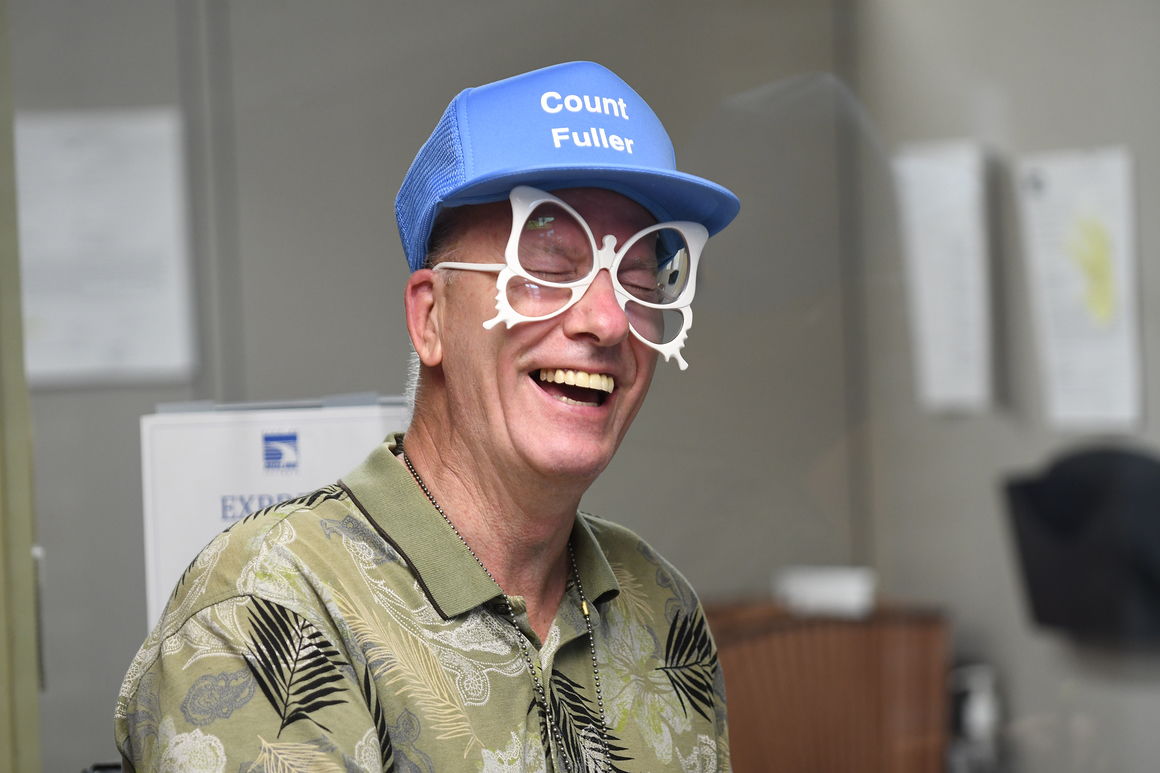 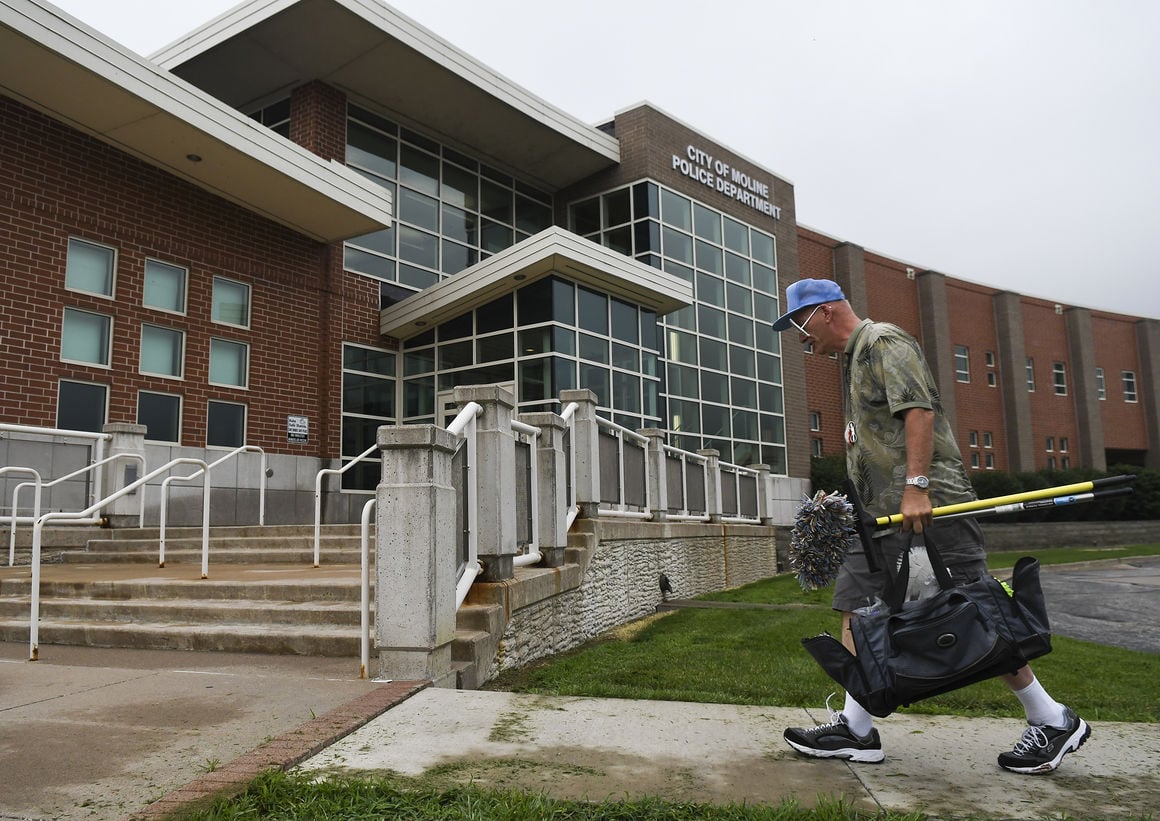 Fuller Brush Man Count Fuller, of West Allis, Wis., walks into the Moline Police Dept. to start the process of obtaining a city door to door sales permit Tuesday July 11, 2017. Mr. Fuller went back to Wisconsin for a week while the city processed his application. He has been a door to door salesman for 44-years. 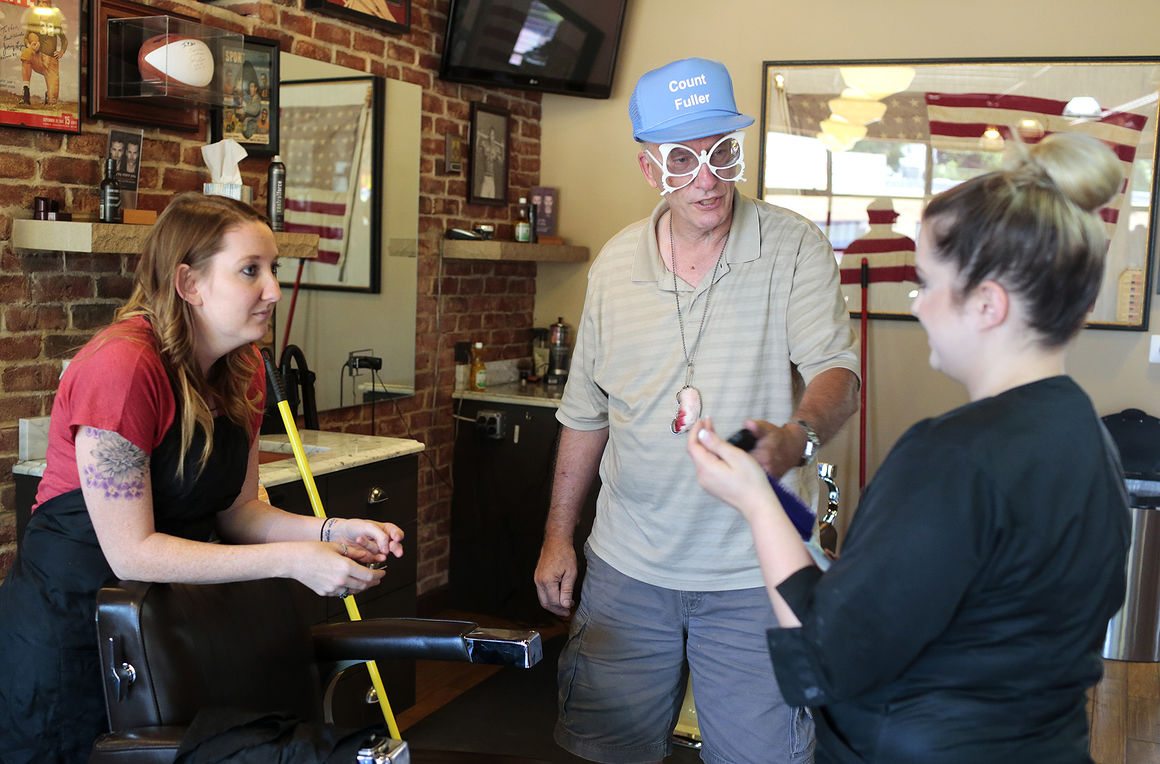 MOLINE -- Amid the explosion of internet sales, a Wisconsin man is bringing part of the past to the Quad-Cities.

Count Fuller, 65, of West Allis, Wis., embodies the iconic Fuller Brush Man with his jovial nature and touch of eccentricity.

“I'm pushing personal contact," he said. "It still has a relevancy in today's world.

“Fuller brushes have garnered quite a reputation over the last century,” he said.

Mr. Fuller said he has been doing door-to-door sales for more than 44 years. He fully committed himself to the Fuller Brush brand in 1982 and changed his name. He said his prescription butterfly-framed glasses are just a small taste of the Count Fuller of old.

“I threw costumes in to make it spicy, and I patterned them in the 1980s after Liberace,” he said. The technique turns heads and makes him memorable, Mr. Fuller said, which is all part of his plan.

“When I die, everyone in Wisconsin and Illinois is going to know,” he said.

Now in its 110th year, the Fuller Brush Co. is an American brand of cleaning products that once was as recognizable as Apple and Walmart are today.

Mr. Fuller said nostalgia is his greatest weapon. His first question to everyone he meets is: "Do you know what Fuller brushes are?" He says his query is either met by a blank stare or a face that lights up and excitedly spills cherished memory in story form.

His Quad-Cities quest for sales ironically started July 11 -- Amazon Prime Day when the massive online marketer filled the internet with deals. But Mr. Fuller found getting a peddler's permit in Moline would take more than a point and click.

“Door-to-door sales is not for the faint of heart,” he said after a few hours of working through the process. But his heart isn't faint as he proved during the process by constantly connecting with people he met and dropping a catalog in the Moline Fire Department.

A week later, with his new permit freshly in hand, Mr. Fuller headed out on his Quad-Cities sales trail. His first stop was an independent 40-year barber on Avenue of the Cities. It also was his first taste of rejection.

His second stop -- at Rayz Barber Shop, 3002 Avenue of the Cities, Moline -- proved more positive, starting with a coincidental run-in with a former Fuller Brush Man sitting in the barber chair getting a high-faded flat top.

The barber tested a rubber-bristled broom designed to sweep up piles of hair with ease and liked what she saw.

“How many would you like -- two?” Mr. Fuller boldly up-sold her, before walking out of Rayz with a fist full of cash and two less brooms to carry home.

“I'm the only one doing this in Illinois,” he said. “No one wants to do this because they're afraid.

"But door-to-door sales teaches people about rejection," he said. "And person-to-person relationships can never be replaced.”

A former employee is suing Generations care center, Rock Island. She claims she was fired for reporting COVID-19 safety violations

A former employee of Generations in Rock Island filed a nine-count civil suit Monday alleging she was terminated in retaliation for reporting COVID-19-related safety violations in May.

Moline police are investigating a hit-and-run on John Deere Road that left one person dead.

MidAmerican Energy officials, at a briefing with the Scott County Emergency Management Team this morning, say power restoration could take up to three or more days due to widespread and significant damage to the energy network.

Numerous closures in the Quad-Cities because of widespread power outages

Almost 100,000 Mid American Energy Co. customers remain without power at this hour, according to the company's outage map.

MidAmerican Energy: This was one of the worst storms the Quad-Cities has seen

THE WEEK IN COVID-19: Quad-City schools start to open as the COVID-19 case count continues to climb

Schools in Illinois  began to open up amid finalization of reopening plans for Iowa districts as the Quad-Cities added four deaths during the week because of COVID-19.

A powerful storm packing winds of 86 mph at the National Weather Service, Davenport, left nearly 111,546 Quad-Citians without power Monday afternoon, with downed trees and power lines all over the area.

The rest of the world didn't stand still yesterday as those without power in the Quad-Cities waited in long lines for gas, fast food and chain…

Aishia Lankford, Davenport, hates to wake up every morning.

Fuller Brush Man Count Fuller, of West Allis, Wis., walks into the Moline Police Dept. to start the process of obtaining a city door to door sales permit Tuesday July 11, 2017. Mr. Fuller went back to Wisconsin for a week while the city processed his application. He has been a door to door salesman for 44-years.